One of the most popular pilgrimage destinations in the world, thousands of pilgrims head for Mount Kailash in Western Tibet every year to perform the ritual kora around the sacred mountain. The Kailash Manasarovar Yatra is the holy trek around Mount Kailash, followed by a trip to either drink or bathe in the waters of the nearby Lake Manasarovar, the most sacred lake in Tibet. Mount Kailash is considered to be a very sacred place for Hindus and Buddhists, as well as followers of Jainism and the Bonpo. Considered to be the center of the universe and the legendary Mount Meru, the kora route around the mountain is one of the hardest treks in Tibet, and as popular with tourists as it is with pilgrims.

Planning the trip to Mount Kailash for the Kailash Manasarovar Yatra is an important thing for both pilgrims and tourists, as you need to find the right time to travel to the mountain. The route around the mountain usually takes around three days, and there are better times of the year to take it than others.

Spring and autumn, from April to June and September to the end of October, are the best times for taking the Kailash Manasarovar Yatra, as these are the times when the weather is at its best for trekking and pilgrimage in Tibet. Weather conditions around this remote mountain in the Gangdise Range of the Transhimalaya can be fickle, and if you are not there at a good time of year, you may find your trip was in vain.

From April to June, the weather is mild, if a little cold at night still. The skies are mostly clear, with few clouds and little rain, which makes it one of the better times to take on this arduous trek. Visibility and dry weather are important when trekking in Tibet, and the spring months have very good conditions for trekking. Temperatures can get a little cold at night in this remote region of the plateau, dropping to well below freezing, even in June. April is one of the best months to take a Kailash Manasarovar Yatra.

The autumn months, from September to October, are also great times for trekking around this high-altitude kora route, with clearer skies and less rain, though you are still likely to see the odd shower in the evenings until the end of October. The valleys around the mountain are also more lush and green in the autumn months, following the monsoon rains that have just finished. A completely different landscape to that in spring, the beauty of the mountain is enhanced by the lushness of the valley meadows and riverbanks.

Spring and autumn are also the best times of year to head for the sacred Lake Manasarovar, a short ride to the south of the sacred mountain. One of the Great Three Sacred Lakes of Tibet, Lake Manasarovar is a huge lake that is shaped much like the sun, and is the next step on the holy Yatra trip in western Tibet.

The lake is considered to be sacred in the same four religions, and while the Hindus believe that the lake was conceived in the mind of Lord Shiva and manifested on earth, for the Buddhists, it is the place where Maya Devi conceived her son, Gautama Buddha. In both religions, it is believed that bathing in the lake or drinking the waters of the lake can absolve you of the sins of an entire lifetime.

The lake is also a popular place for the kora, also known as a Parikrama by the Hindu pilgrims. Sitting at an altitude of 4,590 meters above sea level, this sacred lake has an 88-kilometer kora or Parikrama, which can take a pilgrim between five days and several months, depending on how he travels around the lake.

Kailash Manasarovar Yatra in the monsoon season – July and August

July and August in the west of Tibet is the monsoon season, also known as summer. With an average temperature in the area of around 15 degrees, it is warmer in the area for these few months, and sometimes the nights can still be above freezing. However, with the summer months of July and August being the peak of the rainy monsoon season, it is not always advisable to take on the kora trek around Mount Kailash in the summer. The holiest Lake Mansarovar is situated near Mount Kailash in Tibetan Autonomous Region.

Mount Kailash lies on the edge of the temperate monsoon climate zone, more into the Frigid Plateau Monsoon Climate Zone with a much harsher climate than in Lhasa and Shigatse. While the daytime temperatures can reach as high as 14 degrees, the rainfall in the area is still somewhat heavy enough to make the trail around the mountain a little muddy and dangerous, with up to 125mm of rain in each month.

While the Kailash Kora may not be feasible in the monsoon season, a visit to Lake Manasarovar is still possible, and the kora route can also be done at this time. It may be a monsoon in the area, but with most of the rain coming in the late afternoons and evenings, and less chance of the trail getting waterlogged, it is possible to take the trek around the lake.

Winter in Ngari is a harsh and dangerous time of year when temperatures drop to well below freezing and the winds are bitingly cold and strong enough to make them feel colder, even with warm clothing. From the beginning of November until the start of April the flowing year, it is not advisable to travel to the mountain and lake for the Yatra. Temperatures range from -3 degrees to as high as 0.2 degrees during the day, and can drop as low as -16 at night at the coldest time of year, with the entire winter having temperatures below -10 degrees at night. Rainfall is relatively low, between 30mm and 46mm from January to March, but the bitter cold at night and the freezing winds make it an unpleasant time to take on the region’s hardest and toughest trek.

Held every year in around June, the Saga Dawa Festival is one of the most important festivals in the Tibetan Buddhist calendar. Celebrated in the fourth month of the Tibetan calendar, the Saga Dawa Festival celebrates the birth, enlightenment, and death of Buddha Sakyamuni, and is a time when Tibetan Buddhists can accumulate an immense amount of merits towards their own enlightenment. 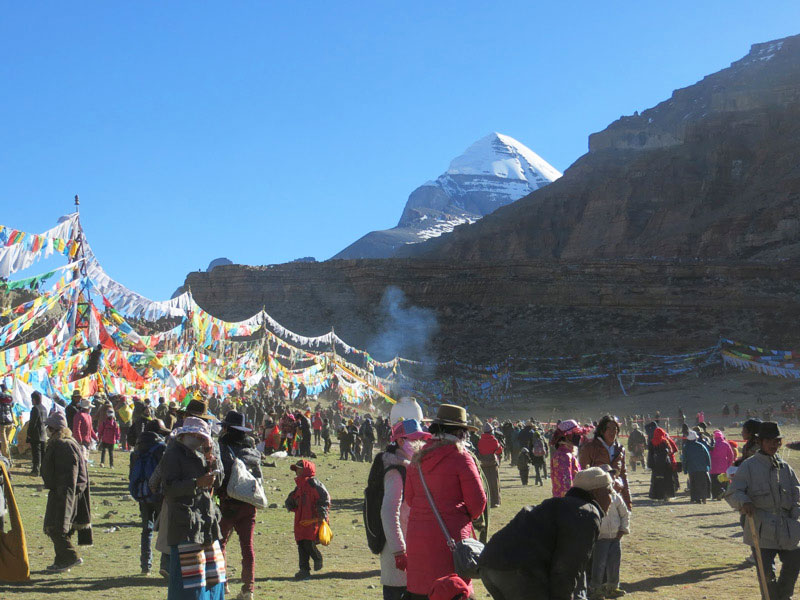 The festival is a very popular and important event at Mount Kailash, and thousands of pilgrims and tourists descend on the mountain for the ceremonies and to take on the intense trek around the mountain. At the small village of Darchen, people gather in the dark of the early morning, and head towards Tarboche, at the entrance to the valley that runs along the western face of the mountain. At Tarboche, ceremonies and chanting are led by Tibetan Buddhist lamas, and the flagpole, with its huge amounts of prayer flags, is taken down and the flags replaced with new ones. Once replaced, the flagpole is erected once more by a special lama, who is responsible for it being perfectly vertical.

After the ceremonies, the tourists and pilgrims all head off around the mountain along the kora route. One of the most spiritual journeys in Tibetan Buddhism, to make the kora on this day is believed to accumulate a thousand times more merits than at other times. While most tourists on the trek take around three days to complete the 52-kilometer trek, some devout Buddhists can make this long and arduous hike in just a single day, and repeat it daily for many days after. – Check the most popular 15 Days Tour Kailash in Saga Dawa Festival

What to Pack for Kailash Manasarovar Yatra

If you are planning a trek around the mountain, then you are going to need to have some specialist gear, as the weather is unlike anywhere else in Tibet. Warmer clothing and more layers is one concern, as you will need to cover up more to stay warm enough, even when trekking up to the heights of Drolma La Pass. Upper clothing should include several layers of long-sleeved tops, as well as a good thick down or fleece jacket, and a rain/windproof jacket to carry just in case. For the lower parts of the body, you should bring some warm thermal underwear, as the weather is still cold, especially at night. That should be covered with good warm trekking pants, preferably waterproof or made of nylon, as these will keep your legs warmer. Waterproof pants are useful just in case it does rain a little while you are trekking.

Good hiking boots are a necessity, and you should invest in several pairs of warm thick woolen socks, to keep the cold off your feet. Hiking boots should have waterproof tongues and cover the ankles for better support on the rocky stretches.

Your kit should include a pack that is suitable for the entire three-day trek, as you will not have the support vehicle for this period. Your pack should be a good, solid rucksack or Bergen that can sit high on the shoulders for comfort and be able to hold enough clothes and food for the trip, as well as having straps for tent and sleeping bag.

The Kailash Manasarovar Yatra is one of the most stunning trips you can take in Tibet, and takes you far out into the west of the region, to an area where few people live and where most of the locals are nomads or yak herders. However, while this trip is one of the most remote in Tibet, it is also one of the most spiritual, and there are few that complete the kora around the sacred Mount Kailash without a feeling of achievement and spiritual rejuvenation, even on a small scale. And with the trip to the lake coming directly after completing the trek, you have the opportunity to relax at one of the world’s holiest bodies of water.