What You Should Not Miss in Our Central Tibet Cultural Tour?

Tibet is considered to be a favourite tourism spot amongst the enthusiastic tourists all over the world. There is no place in Tibet which does not hold beauty, charm, enigma and authenticity. Tibet Autonomous Region contains various prefectures, having their own specialized rules and regulations. These prefectures are usually controlled by prefects. 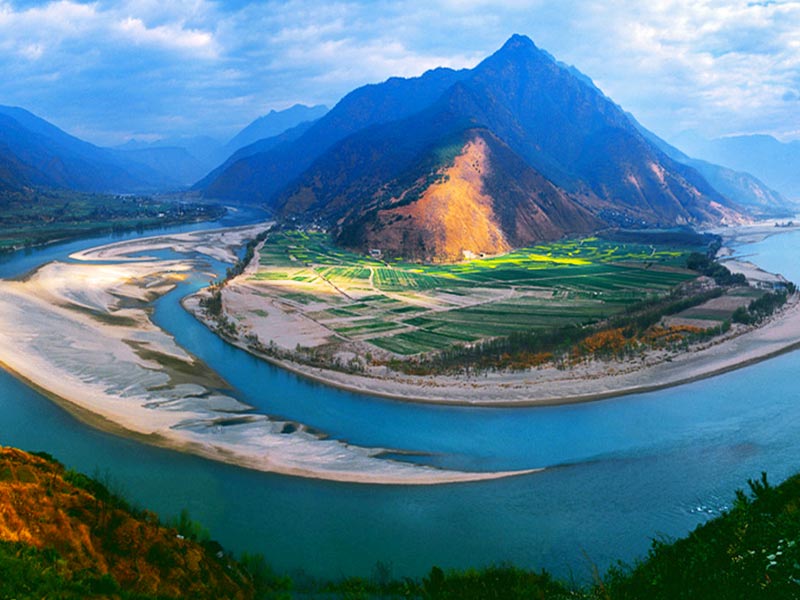 Shannan is one such prefecture in Tibet. In beauty and enigmatic charm, it is no less than other parts of Tibet. Many tourists improvise their tour plans keeping Shannan within their itinerary. This prefecture is also known as Lhoka, located in the southeastern part of Tibet Autonomous Region.

With an area of 79,700 square kilometers, it is a storehouse of various types of peaks and monasteries along with certain beautiful counties. It is also considered to be the birthplace of Tibetan civilization. Shannan is fed by Yarlung Tsangpo and hence because of this river, its beauty is increased many folds. In this article we will discuss the top six activities that you can indulge in while making a tour to the Shannan Prefecture.

Yamdrok Tso Lake in Tibet is considered to be one of the holiest lakes along with Manasarovar and Namtso. Located at an altitude of 4400m, this lake provides a heavenly view that the people are bound to remember throughout their lives. The serene lake is located in the middle and like cautious guards the various mountain peaks surround it. With the crystal clear turquoise colour of the lake in the middle and the white colour of the snow-cad of the surrounding mountains, the place looks like a paradise descended on the earth. The lake has originated and is refilled by the molten snow from the nearby mountains. From Yamdrok Tso, you can also get a glimpse of Nyenchen Khangsar, considered to be a holy mountain by the Tibetans. The scenic charm and the solemn peace of the lake is the chief attraction of the tourists. Moreover there are green stretches of pasture lands located around the lake. You can sit on the bank and savor the delicious local cuisines prepared by the herdsmen. Or you also have the option of witnessing the most gorgeous sunrise and sunset against the spectacular lake and mountain ranges.

Both the monasteries, Ganden and Samye are considered to be the chief two amongst the three Gelugpa sects of monasteries. The third chief monastery is Gelugpa monastery. The Ganden to Samye trek is the most popular trekking route in Tibet, especially amongst the pilgrims. The route offers some beautiful views of lakes, mountains, indigenous villages, alpine landscapes, sacred sites and nomad camps. The best time for this trek is from mid-May to mid-October. During this time you can observe the greenery of Tibet at its best. A classic itinerary of the trek would be –

• Arrive at Lhasa. Stay a day or two to visit all the sites of tourist interest in Lhasa like Potala Palace, Jokhang Temple and others. Customize your itinerary and enjoy your stay.
• From Lhasa, after spending quality time here, drive to Ganden monastery. After completing your view of Ganden monastery, visit to the nearby Tsubshi village to arrange for yaks for trekking. You can take a day rest.
• Start your trekking in the morning to Yama-Do. The trekking distance is 7km and the time required is two to three hours.
• Next day from Yama do, trek up to Tsotup Chu valley. The trek distance is 10km and the time taken is five to six hours. Camping is done here.
• Next day from Tsotup Chu valley, trekking is started towards Chitu La Pass. Ascension and descent is followed and finally camping is done here. The trek distance is 14 km and the time taken is 5-6 hours.
• The distance from herder’s camp to Yamalung is almost 40km. you can divide the distance of trekking like you can trek for 15km and then ride a vehicle. In Yamalung, you will come across many varieties of shrubs and greeneries. You can also hike to Yamalung hermitage. Then you can visit Samye monastery from here by a vehicle.

Chim-puk hermitage is nothing but a cluster of caves located in the northeastern part of Samye. These caves were the area of mediation for the famous Gulug Richope. The caves are located in a lush of greenery. There are said to be 108 caves, 108 sky burials and 108 spring mouths. Located at an altitude of 4300m, it is very famous for its comfortable climate and charming scenic appeal. 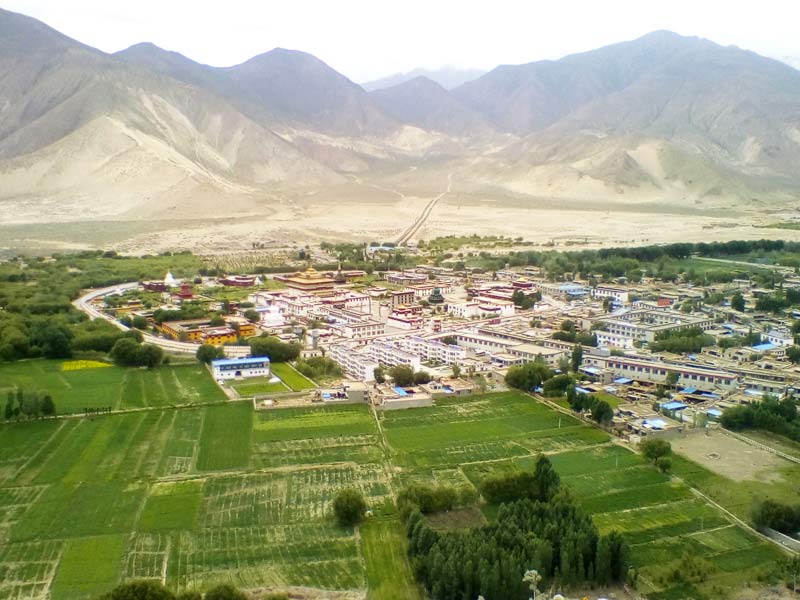 The best time for visiting is all the year round and it remains open all day long. If you think that these caves are uninhibited, think twice before you guess. Currently over 200 Buddhists dwell in these caves, 70% of whom are nuns.

This palace is the heart of legend and history in Tibet. It is the first palace in Tibet, built by the first king in Tibetan history named Nyatri Tsenpo. It became princess Wencheng’s summer palace, owing to the beautiful scenery. 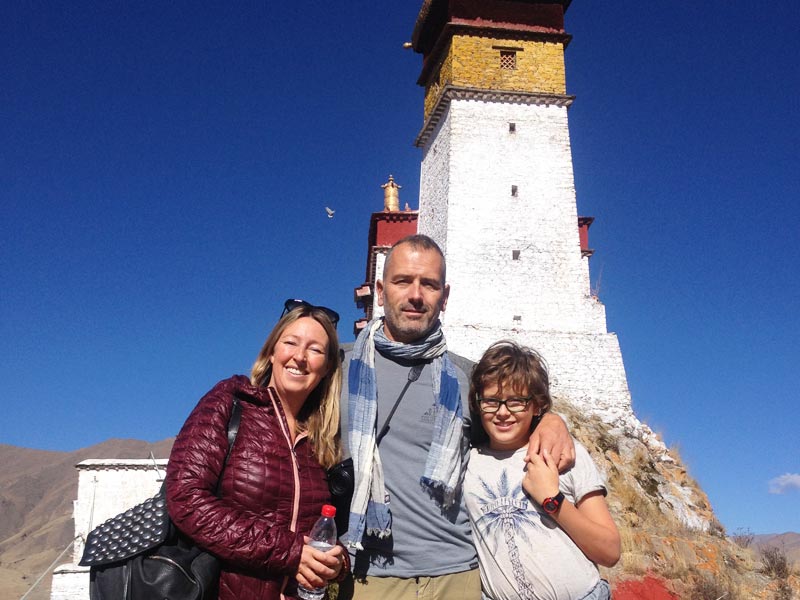 However later on, this palace had been transformed into a monastery known as Yambulang monastery. The walls of the monastery are decorated with beautiful murals. The monastery also contains towers, chapels and halls that are extremely attractive for the tourists. There are many sculptures of Nyatri Tsenpo, Songsten, Gampo and his ministers. The place really demands a view from each and every tourist. The vast stretches of fields along with villages and mountains are very appealing.

This hot spring retains a heritage value of over thousand years. This spring is extremely popular as the water of this spring is extremely good for several bodily ailments. It even finds a mention in the Buddhist scriptures and ancient texts. It is said that if you soak in the water of Riduo hot spring, your blood pressure can also be regulated. According to the myth, drinking the water of this spring abolishes the five sins namely the greed, anger, lust, foolery and laziness. 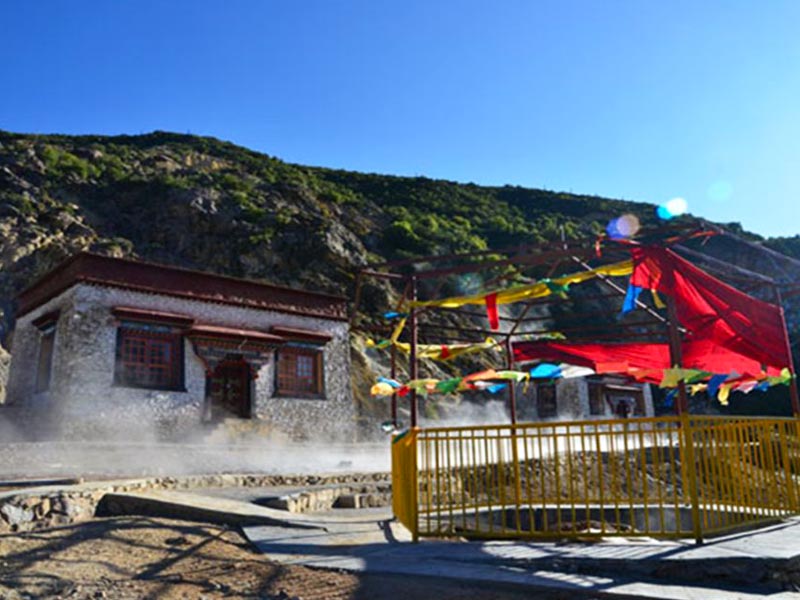 The water of this spring actually cures rheumatism, skin diseases, has pulmonary functions, and cardiovascular functions. In the recent years, the water of Riduo hot spring is collected for its rich content of fluorine, silicon, arsenic and lithium, which are used for various medical purposes. Thus in your voyage to Shannan, take day out to soak relaxingly in the wonderful water of Riduo hot spring.

Lhamo La-tso lake also holds immense cultural, mythological and heritage value. It is considered to be one of the most important pilgrimage destinations. The blue lake juxtaposed against the brown and white coloured mountain ranges around it, increases the beauty and charm many folds. The place being at a high altitude is characterized by highly changeable climate. It is usually covered with mists or clouds and strong gusts of wind which altogether create a constant ripple on the surface of the water. There is a temple, a form of Palden Lhamo that is now covered with prayer flags and offerings. Being the most popular site of pilgrimage, the lake demands a value at least once in a lifetime.

The trip of the Lhasa along with the Bramaputra relics usually is a trip to all the famous tourist sites inside and outside Lhasa. Inside the Lhasa, this trip might include the visits to the very famous places like Potala Palace, Jokhang Temple, Barkhor Street and other areas. Outside Lhasa, it may include a visit to the Ganden monastery or Drgung til monastery. A classic itinerary for such a trip can be as follows –

This is the day when you arrive in Lhasa. Keep this day for rest and relaxation as you might get affected by altitude sickness. Take time to get acclimatized by the high altitude of Lhasa. You can visit the famous Potala square where you will come across several coloured fountain shows. You also can take a stroll around to feel regenerated. 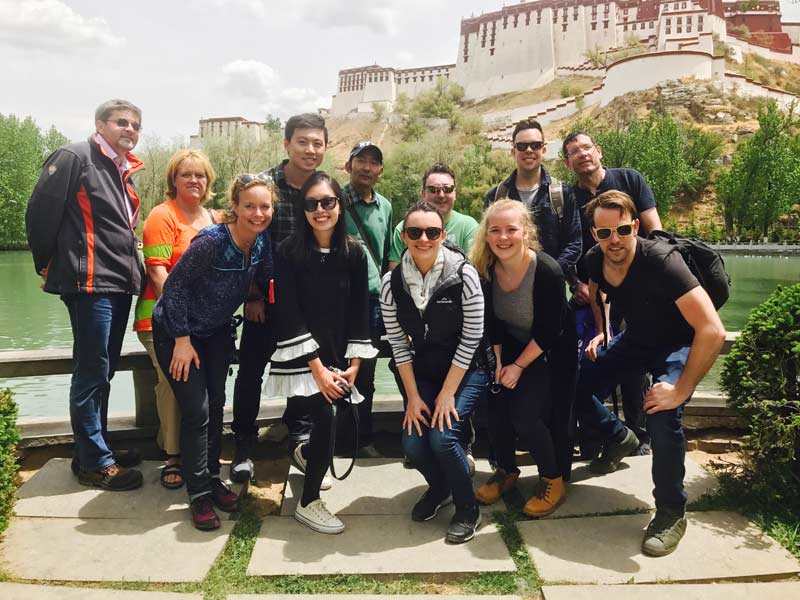 The next day begin your trip by first visiting to Potala Palace also known as the winter palace of Dalai Lama. Get soaked in the mind boggling architecture of Potala Palace. Take time to assess each and every halls and rooms within Potala Palace. 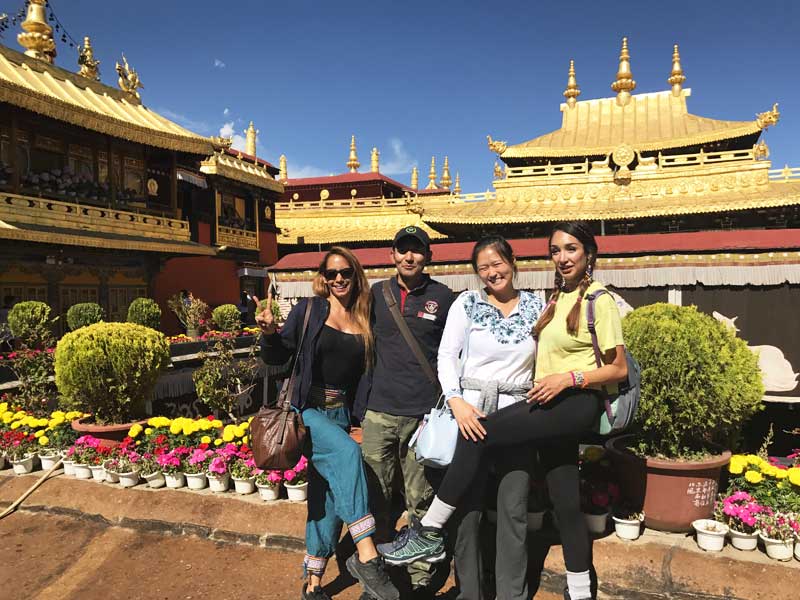 After that you may have your lunch and head straight to Jokhang Temple. This is yet another place of wonder owing to its authentic Tibetan charm. Inside Jokhang Temple you can take a glimpse of the twelve years old Sakyamuni Buddha. Take time to enjoy the Buddhist charm of the place. 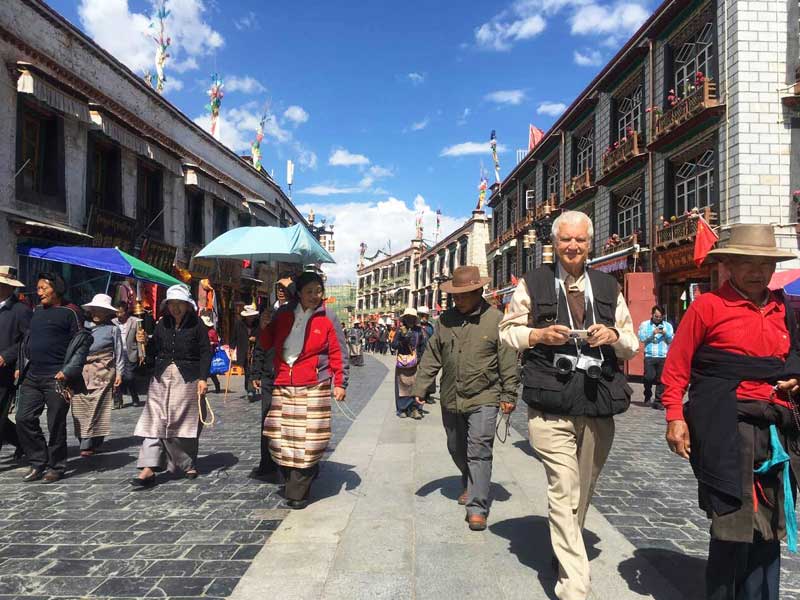 After that visit Barkhor Street that surrounds Jokhang temple. Follow the monks who often do kora in this street around Jokhang temple. From the hustling and bustling of the street, you will imbibe the authentic Tibetan Buddhist charm. You will see how the monks chant prayers and rotate the prayer wheels. Also this street contains some really good shops for shopping. You can buy as much as you can and yet feel that nothing as actually been stacked up. Stay in Lhasa for the night. 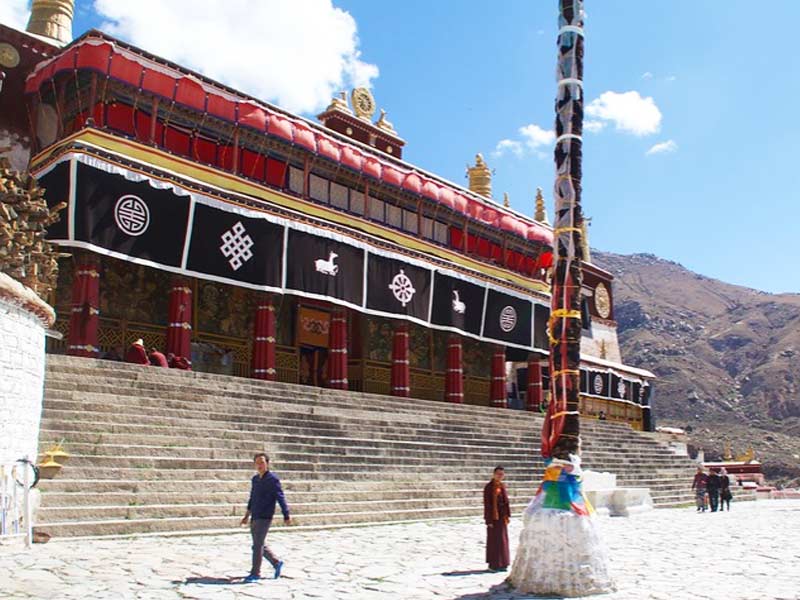 Today, prepare yourself to witness the ‘cradle of Tibetan monastery’ namely Tsedang. It is located in Yarlung valley and is the capital of Shannan Prefecture. You can visit Yambu Lhakhang or the Yambulang Palace, the first palace in the history of Tibet. Thereafter you can visit Trandruk, the oldest monastery of Tibet. It has a heritage value of over 1300 years. Stay at Tsedang. 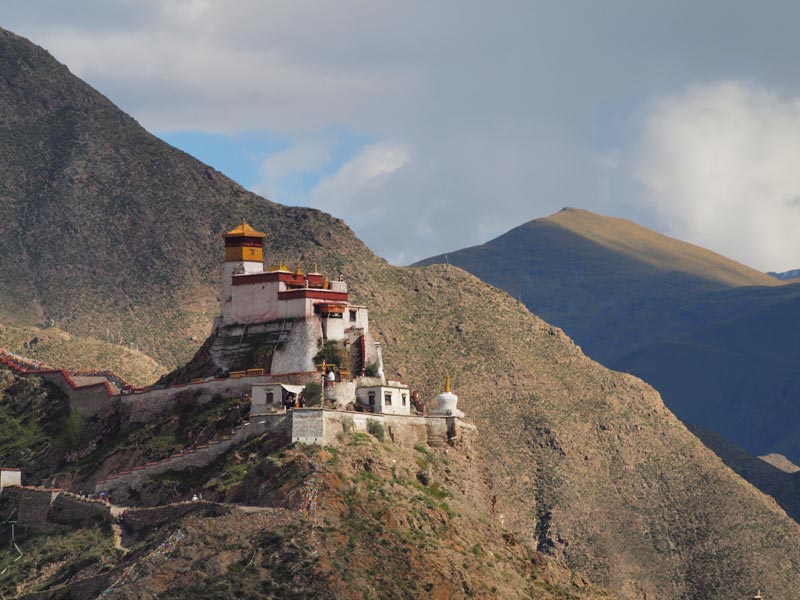 From Tsedang make a journey to Samye Monastery which is considered to be the first monastery of Tibetan Buddhism. The structure of the monastery resembles that of the Buddhist idea of universe. The principle temple represents Mount Meru, a mythical mountain. The four continents are represented by four temples, each having smaller temples to represent oceans and islands. There are many hotels near Samye where you can spend your night. 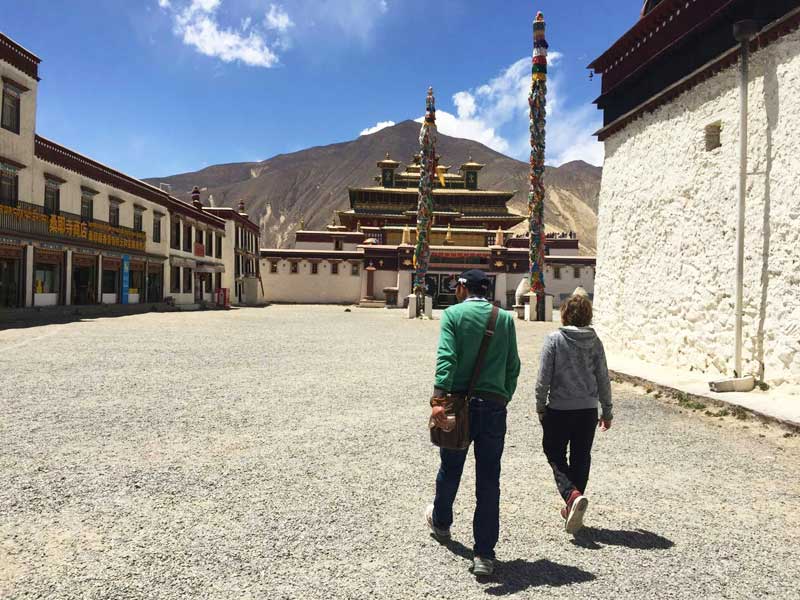 From Samye visit Chim-puk Monastery, located at the northeastern side of Samye. As has already been said, Chim-puk Monastery consists of 108 caves meant for the meditation of the famous leader Guru Rinpoche. The lush greenery and the favorable climate are also main attractions around this monastery. Nowadays many monks and nuns inhabit the place. After witnessing Chim-puk Monastery, drive back to Tsedand and stay overnight there. 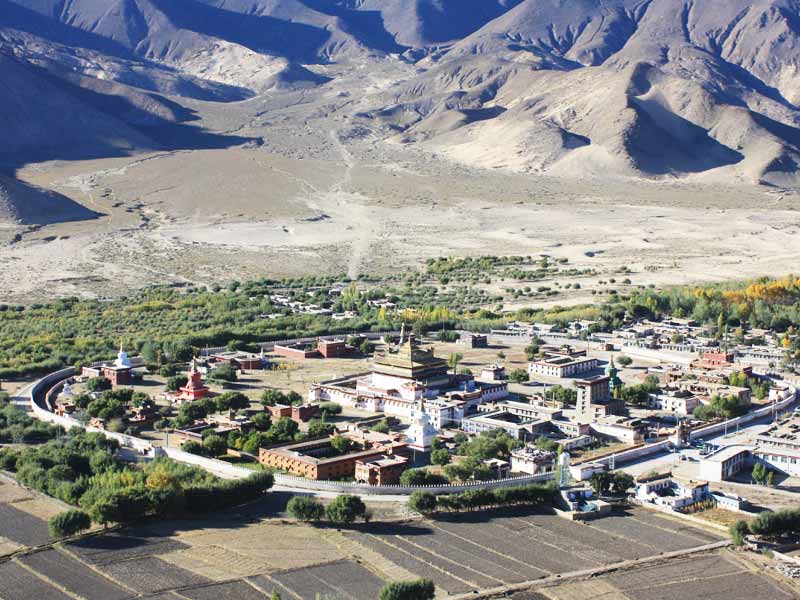 From Samye visit Chim-puk Monastery, located at the northeastern side of Samye.

From Tsedang you can get to the airport or railway station and get over board. While making this total trip, do not forget to keep your Chinese tourism visa and Tibet Travel Permit handy.

0 Comment ON "What You Should Not Miss in Our Central Tibet Cultural Tour?"