Tibet is renowned for its high mountains, stunning lakes, and awesome Buddhist monasteries. It is also well known for the unique culture of the Tibetan people, where Tibetan Buddhism is a major part of their everyday lives. And for anyone, esp. to cultural explorers, planning a trip to Tibet to explore the amazing culture, there are some things that you should never miss experiencing whilst in Tibet.

Sit with Locals for Sweet Tea in a Tibetan Teahouse

Why should you visit a Tibetan teahouse?

In Tibet, sweet milky tea is one of the most popular beverages you can find. Every Tibetan drinks tea, and the teahouse culture of Tibet has become a major cultural experience. And these teahouses are much more than just somewhere to get a cup of tea. Along with the usual sweet Tibetan tea, the teahouse in Tibet is just as well known for the social aspects as well. For a Tibetan, especially those in the capital, a visit to the teahouse is like visiting the coffee shops in the western world. Students come to chat and study, groups of younger people come in to play games of dice and chance, and the elderly gather to discuss family issues and other topics as they enjoy their sweet tea. You can even find Tibetan Buddhist monks and lamas enjoying tea in the teahouses, some even still meditating over their tea with prayer wheels in hand.

Highly Recommended Tibetan Teahouses for You to Explore

There are a huge number of teahouses in Lhasa, the Tibetan capital, and for anyone wanting to experience this unique cultural delight, there is nowhere better. One of the most unusual is the Tsamkhung Nunnery teahouse (also known as the Canggu Nunnery), which is located inside a peaceful Buddhist nunnery in Lhasa. Though built in the downtown area, the teahouse of Tsamkhaung Nunnery offers you a nice and quiet place from hustle and bustle of the Barkhor Street and the nuns work daily providing tea to help fund the nunnery. 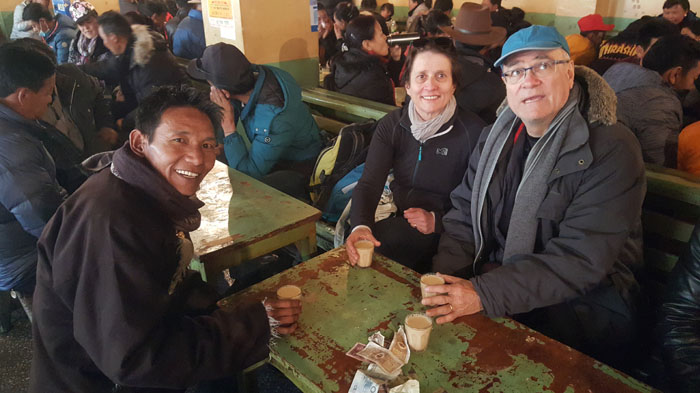 The Guangming Sweet Tea House is located near Barkhor Street, and is renowned as the most famous teahouse in Lhasa. The atmosphere is more boisterous and louder than most teahouses, and the shop is popular with many locals and tourists.

The Shan Dong Sweet Tea House, near the Potala Palace, is located inside an actual cave, with the ceiling being the roof of the cave itself. A unique location for drinking tea in one of the most atmospheric locations in Lhasa, this tea-cave is popular with the locals.

Join the Kora with Local Pilgrims around Barkhor Street

What is Kora to Tibetans?

For Tibetans, the kora is a ritual kind of pilgrimage and meditative practice around a sacred or holy site. These short pilgrimage journeys around holy sites are a ritual or ceremony to the gods, and are an integral part of the life of all Tibetan Buddhists. - Check the top six kora routes in Tibet.

The literal meaning of the word kora comes from the Tibetan word, “skor ra”, which translates as meaning "circumambulation" or "revolution". The practice of performing kora pilgrimage comes from the introduction of Buddhism in Tibet in the 7th century.

Each step taken on a kora walk is meant to move the pilgrim further along the path towards enlightenment, the aim of all living beings in Buddhism. By performing the kora with a passionate motivation, one can seek out wisdom in compassion, and can purify the soul of negative feelings.

How to Enjoy the Kora around Barkhor Street

One of the most popular kora routes in Tibet is the route around the Jokhang Temple in Lhasa, which follows the roads of the famous Barkhor Street. Following one of the busiest streets in Lhasa, the ancient circuit around the temple is considered to be one of the most sacred kora circuits in Tibet. 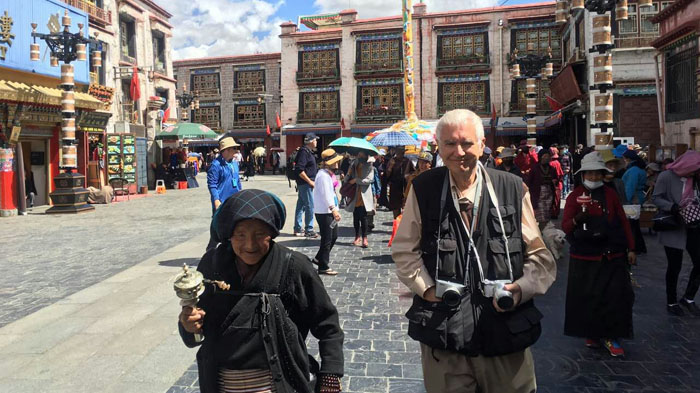 Our client did kora around Barkhor Street with local Tibetan pilgrim.

The route of the kora covers around five kilometers in total, and you can see Tibetan pilgrims walking the kora daily, with many completing several circuits of the temple in one day. The route around the temple has prayer wheels at certain locations along Barkhor Street, for the pilgrims to spin and pray with as they walk.

A Nangma Hall is a Tibetan dance hall, many of which can be found in different locations around Lhasa and across Tibet. Often also called Langma, these halls are the Tibetan equivalent of the disco or nightclub, and are a popular place to spend an evening in Lhasa. These dance halls and nightclubs can be found all over Lhasa, and the name “Nangma” has even been used as the name of one of Tibet’s popular traditional Tibetan bands. 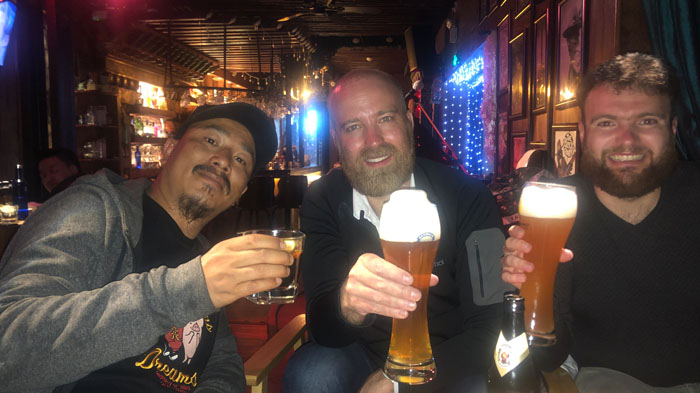 Experience Nangma Hall with our Tibetan guide in Lhasa

One of the traditional styles of music and dance in Tibet, Nangma is the more common type of show, while the classical Tibetan operas are normally only performed at festivals and events. - Find out how our clients enjoy the Nangma Hall in Lhasa.

What can you experience at a typical Nangma Hall?

The traditional Nangma Halls in Tibet offer a great evening’s entertainment in a traditional Tibetan style, including folk dances, modern dancing, and even something good to eat. While some of the halls only offer performances, there are plenty that also allows you to get up and dance with your friends, in a form of circular line-dancing.

Across the city, you can find the Tianzhige Nightclub, the Mengbala Nightclub, the Western Singing and Dancing Hall, the Tanggu Lafeng, the Blue Huiyi, and the Lhasa Soho, among others. Most of the nightclubs are in the area around the Potala Palace, stretching from Norbulingka in the west to the Jokhang Temple in the east.

What makes Tibetan cuisine so special? 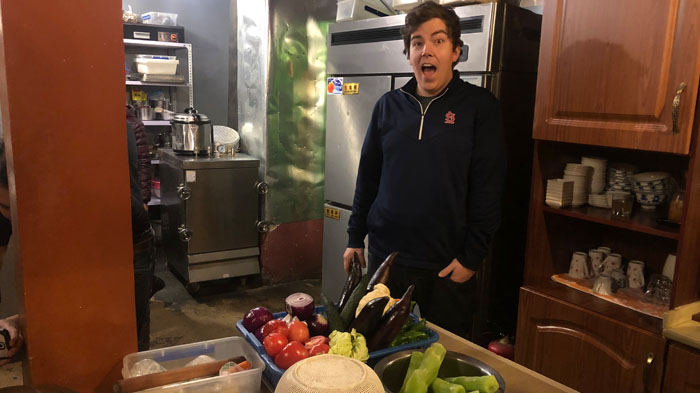 Join in a Tibet culinary tour to learn how to make a Tibetan food in the cooking class.

What to expect for a Tibetan cooking class?

One of the best places to get good local ingredients is the famous Tromsikhang Market, where you can find most of the typical Tibetan specialties. We offer a one-day cooking course to help you learn about Tibetan cuisine and the different dishes, and you can learn how to make tsampa balls and momos, two of the most dexterous types of dishes in Tibet. You can also learn more about how the ingredients blend together to make delicious dishes from minimal content. - Join Tibet culinary tour and discover the authentic Tibetan cuisines with our local food experts.

Princess Wencheng Matters to the Understanding of Tibetan Culture

One of the best shows to hit Lhasa in the last decades, the Princess Wencheng stage show is a must-see for anyone visiting the Tibetan capital. Telling the story of the life of the “Chinese Wife” of the Tibetan king, Songtsen Gampo, in the 7th century, this unique show gives an idea on the significance of the famous princess in both Tibetan Buddhism and the local Tibetan culture of today. To our clients, you can use our easy booking and convenient transfer to enjoy the outdoor musical.

Where and what to expect for the epic Drama？

The drama play is held in the Princess Wencheng Theater, in the China Tibetan Culture and Tourist Creative Park in Chengguan District of Lhasa, and is an outdoor theater show that is filled with dancing and music, lights, and stunning costumes.

Held on the 25th day of the 10th month in the Tibetan calendar, the Tsongkhapa Butter Lamp Festival, also known as the Gaden Ngachen Chenmo Festival, is one of the most important festivals for Tibetan culture. The festival celebrates the life and death of Je Tsongkhapa, the founder of the Gelug tradition of Tibetan Buddhism, and is an extravaganza of butter lanterns and butter lamps that are lit across the city. 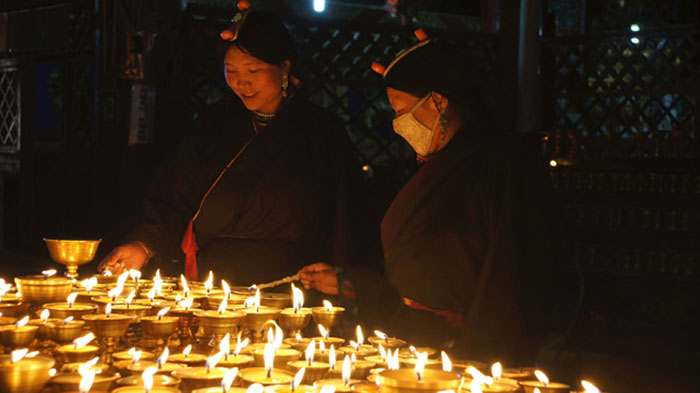 The best place to be is on Barkhor Street, where you can join the pilgrims as they walk to kora around the Jokhang Temple, before seeing the amazing spectacle of lit lanterns and candles that line to rooftops and windowsills of the city.

As the spiritual heart of Tibet, Lhasa has more local experiences to explore in each season. And we offer you a variety of inspiring Lhasa tours for authentic Tibetan discovery. From the delights of Tibetan teahouses and Nangma nightclubs to the wonders of Tibetan opera, the historical depiction of the Chinese princess who changed Tibet, and the Buddhist rituals of the kora and the festivals, a trip to Lhasa is one of the best ways to understand and learn more about the unique people on the Roof of the World.