Tibet Landmarks: what to see and should never be missed for any of Tibet tour

When traveling to Tibet, there are always plenty of places to go, things to see and do, and sights that will leave you breathless. Of all these things to see, Tibet has some landmark sites that are world-famous and which you should never miss when traveling to the roof of the world. 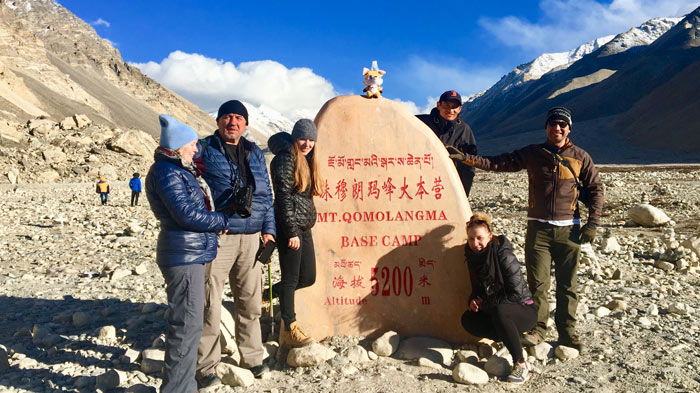 Our Clients Standing in Front of Mount Everest Base Camp Monument

These famous landmarks are the iconic examples of Tibet, and the things that make Tibet what it is, as well as symbols that mark the very essence of being Tibetan. Each of these famous landmarks has a different aspect of what it means to be Tibetan, yet each can be taken individually or all together as a whole, and one can still understand how these iconic landmarks are important in Tibet, both religiously and culturally.

Built high on the Red Hill above the Tibetan capital of Lhasa, the Potala Palace is one of the iconic landmarks that embodies the essence of Tibet. Once the center of Tibetan politics and governance, the Potala palace has a history that goes back several centuries, though it is not the oldest of Tibetan Buddhist buildings. It is, however, one of the most important.

Constructed in its present form by the 5th Dalai Lama in around 1645, it became the seat of power in Tibet for almost 100 years, until the construction of Norbulingka Palace in 1755. The palace was built on the site of an ancient palace fortress that had been built in around the 7th century by the ancient Tibetan king, Songtsen Gampo. 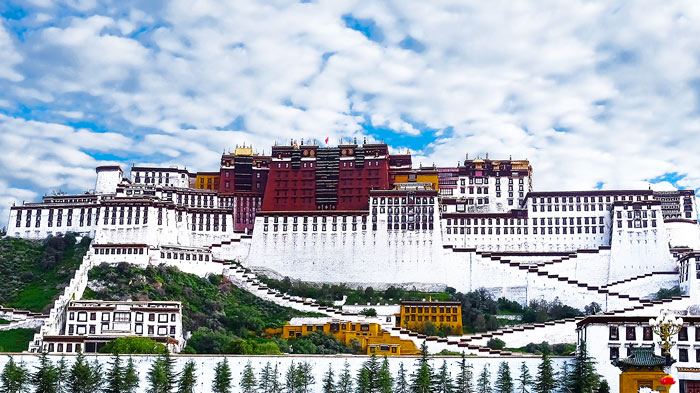 Potala Palace is one of the iconic landmarks that embodies the essence of Tibet.

Lying as it does on the hill above the city, the palace can be seen for miles around, its Red and White Palace walls clearly visible above the region’s capital city. Traveling to Lhasa by train, the palace is one of the first things you can see clearly as you arrive, and is the main visible landmark of Lhasa, and of Tibet. Once you can see the palace standing tall above the city like a red and white guardian, you know you have arrived at the world’s highest capital city.

Constructed in 647, six years after the arrival of Princess Wencheng of the Tang Dynasty, for her marriage to the king, it was originally built as a Buddhist temple for the princess, who was a devout Buddhist, and to house the gilded statue of the Sakyamuni Buddha aged twelve, that she had brought with her to Lhasa from China. 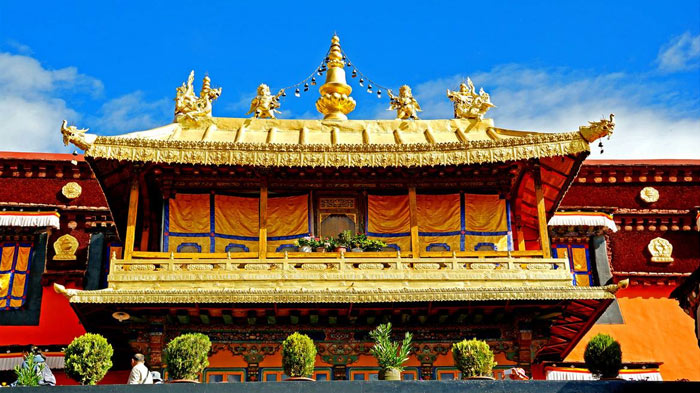 Jokhang Temple is the most sacred temple of Tibetan Buddhism.

Located in the center of the Old City of Lhasa, Jokhang Temple is the culmination of pilgrimage for many thousands of people every year, who travel across the plateau on foot to reach this sacred shrine and pray at its gates, prostrating themselves before the sacred temple before performing the ritual kora walk around the temple itself.

Known as one of the main monasteries of the Gelugpa School of Tibetan Buddhism, the Tashi Lhunpo Monastery in Shigatse, around 270 kilometers to the west of Lhasa, was constructed in 1447 by the first Dalai Lama, Gendun Drup. However, it has never been the home of the Dalai Lama, and instead became the traditional seat of the Panchen Lama, the second highest Buddhist incarnation in Tibet. 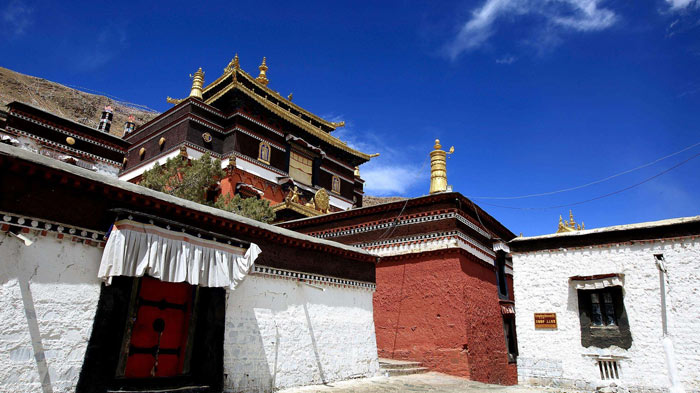 Tashilhunpo Monastery, one of the main monasteries of the Gelugpa School of Tibetan Buddhism.

Located on the small hill in the center of the city, the name means "all fortune and happiness gathered here" or "heap of glory". The monastery has been considered to be so stunning, that a British Army Officer that traveled there in the late 18th century is said to have stated: “…it made an impression which no time will ever efface from my mind." Around the monastery lies the traditional kora route, which runs around almost all religious sites in Tibet, and pilgrims regularly circumambulate the monastery in reverence to its holiness.

Set somewhat apart from the main tourist routes in Tibet, Yumbulakang Palace is the first and oldest palace in Tibet, and lies on the east bank of the Yarlung Zangbo River in Lhoka Prefecture to the south of Lhasa. Legend states that it was the first building in Tibet, as well as being the palace of the first Tibetan king, Nyatri Tsenpo. The palace stands on a small hill that overlooks the river and the Yarlung valley, some 120 kilometers to the south of Lhasa.

It is said that, when the first Tibetan king descended from the sky, the Bon people built the first palace for him to reside in. It is said that his reign began in around 127 BC, and that the palace was built on the place where he landed from heaven. 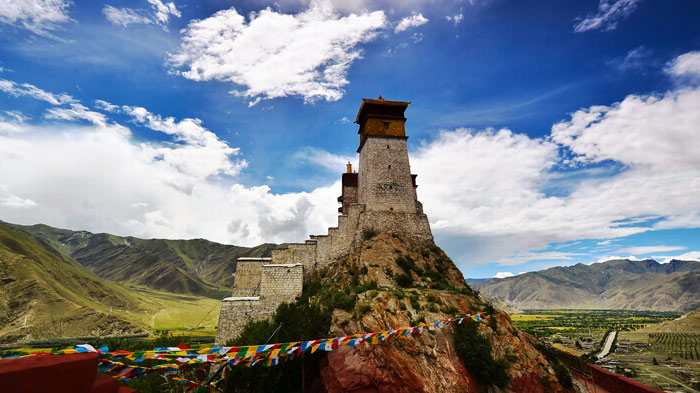 Yumbulakang Palace is the first and oldest palace in Tibet.

The palace served as the seat of royal power for more than 700 years, until the 33rd king of Tibet, Songtsen Gampo, moved the royal palace to Lhasa, in the palace fortress where Potala Palace now stands. After the move, Yumbulakang was transformed into a shrine to the great Tibetan kings of old, and was the honeymoon setting for the king and his “Chinese wife”, Princess Wencheng.

While it may be a shared mountain with Nepal, around the world, Mount Everest is known as the highest mountain in the world, which is in Tibet. Known locally as Chomolungma or Qomolangma, the mountain’s peak sits at an altitude of 8,848 meters above sea level. The peak of this great mountain is constantly covered in snow, and it has long been the most challenging mountain in the world for mountaineers.

One of the most popular tourist sites in the world, Mount Everest sees thousands of visitors every year just to stand at the base of the mountain and take photos. Everest Base Camp (EBC) on the northern side in Tibet is the most easily accessible base camp of any mountain in the Himalayas, and can be reached by road from Lhasa and Shigatse. 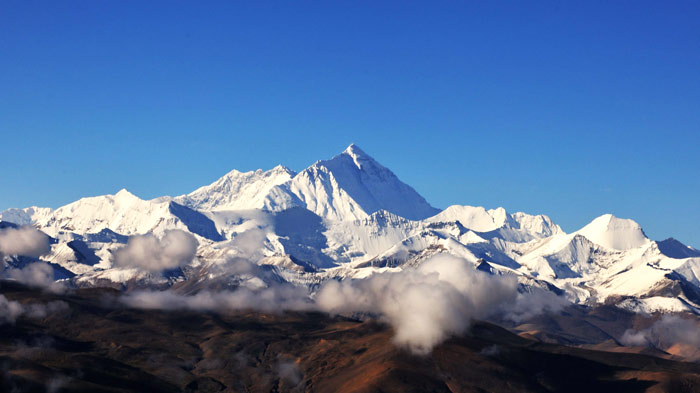 Mount Everest is known as the highest mountain in the world.

For those that want the thrill of trekking to the mountain, there is a trekking trail that starts in Old Tingri on the G318 Friendship Highway, that runs for 70 kilometers right up to the base camp itself. A four-day Everest trek for someone of average fitness, it is a constant delight to see the mountain getting closer as you crest each rise and mountain pass.

Also known as Kang Rinpoche or Gangs Rin-po-che in Tibet, Mount Kailash is the most sacred mountain in the world, believed to be the actual Mount Meru of Buddhist and Bon legend, and the center of the Universe in four different religions. For the Buddhists, Hindus, Jains, and Bonpo, the mountain is the embodiment of the center of the universe, and is believed to be so sacred that no mortal that has not become enlightened could set foot on it.

Mount Kailash is deemed in Tibet to be so sacred that attempts to climb its holy slopes have been halted before they ever began, and the government now forbids any attempt to scale the mountain in deference to its sacred status. In 1936, when asked if it was possible to climb the mountain, a local lama replied: “Only a man entirely free of sin could climb Kailash. And he wouldn't have to actually scale the sheer walls of ice to do it – he'd just turn himself into a bird and fly to the summit." 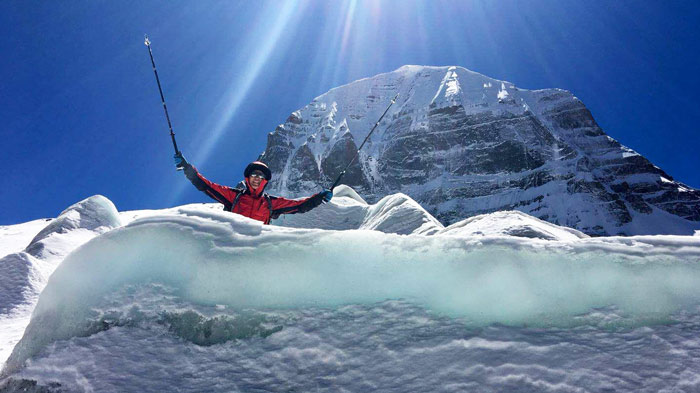 Mount Kailash is the most sacred mountain in the world.

Around the mountain’s base lies the world-famous Kailash Kora, the ritual kora route that is regularly traveled by pilgrims that come to the mountain. A trail that extends for 52 kilometers around Mount Kailash, the kora route is one of the hardest treks in Tibet, yet is also one of the most popular. Thousands of tourists head for the mountain every year to make the three-day trek around the mountain, crossing the Dolma La Pass, the highest point of the Kailash kora at 5,636 meters above sea level.

In Tibet, all lakes are considered to be holy, as it is widely believed that there are deities living within them all, be they good or bad. However, there are three large lakes on the plateau that are considered to be the most sacred lakes in the world. Lake Manasarovar in Ngari Prefecture, Lake Yamdrok in Lhoka Prefecture, and Lake Namtso, in Lhasa Prefecture, are known in Tibet as the great Three holy lakes, and are revered in Tibetan Buddhism. Lake Manasarovar, in Ngari just to the south of Mount Kailash, is also revered by the other three religions, Hindus, Jains, and Bonpo.

Lake Namtso is well known as one of the most stunning lakes in the world, and is translated to mean “Heavenly Lake” in English. Lying around 6 hours drive to the north of the Tibetan capital, it is a regular spot for tourists and pilgrims alike, and is a great place to stay overnight and watch the stars in the intensely black night sky. 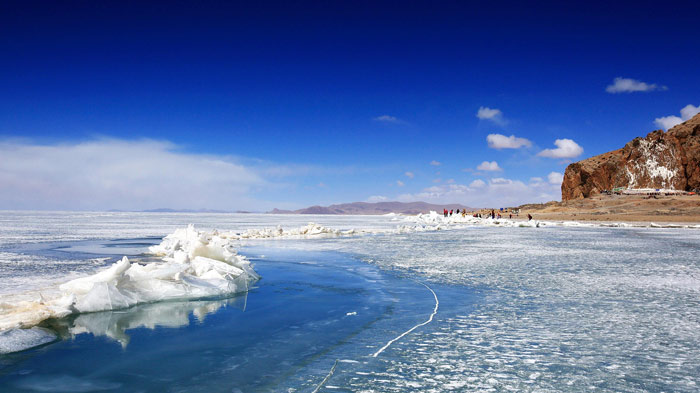 Lake Namtso is well known as one of the most stunning lakes in the world.

Lake Yamdrok, also known as Yamdrok Yumco, is a huge fan-shaped lake to the south of Lhasa, in Gonggar County of Shannan Prefecture, also known in Tibet as Lhoka Prefecture. Fed by many mountain streams, the lake is believed to be the transformation of the jade earring of a goddess. Considered to be a part of the life-spirit if Tibet, it is believed that if the lake dries up, Tibet will no longer be habitable.

Lake Manasarovar, probably considered to be the most sacred of all the lakes in Tibet, is revered in four religions, and it is believed that if one drink from the waters of the lake, or bathes in the lake, it will absolve you of the sins of a hundred lifetimes. The lakes all have their own kora routes around them, and are all popular pilgrimage destinations in Tibet.

0 Comment ON "Tibet Landmarks: what to see and should never be missed for any of Tibet tour "