The monk’s debates are a huge attraction for tourists to Tibet. Full of loud statements, hand clapping, and extravagant gestures, they are one of the most interesting parts of a visit to any monastery. In many monasteries in Tibet, you can watch the debates in the afternoons, held in special debating areas that are usually courtyards, orchards or grass lawns with shady trees. 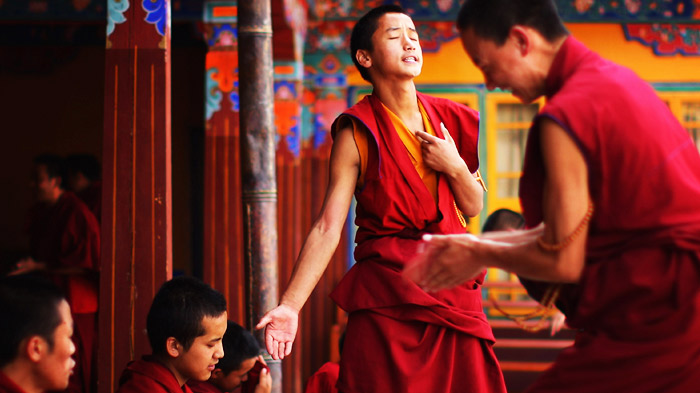 Sera Monastery in Lhasa, the Holy City of Tibetan Buddhism, is one of the most famous of all the debating monasteries. The monastery is one of the Three Great monasteries of Tibetan Buddhism, and is dedicated to the Gelugpa sect. Monasteries in Tibet were traditionally the center of Tibetan life, and still are in a lot of ways. Monasteries were used as the religious and education centers, with schools and universities, as well as hospitals and marketplaces. Even today, the monasteries provide a university-level education for some young people.

It is little wonder that, with these monasteries used as universities, the monks developed the habit of debating on various philosophical issues. Buddhism is a religion of wisdom, which means that it is based on the realizations and insights of the historical Buddha. They believe that a person can be freed by wisdom, and by seeing the nature of all things. In part, philosophical debate is one of the paths to wisdom. It is a practice to debate on the opinions of the philosophical concepts, and is so valued that if one loses a debate, one is compelled to accept the argument of the other debater.

The main purpose of the Tibetan monastic debates is to defeat any misconceptions. By establishing a defensible view, one can clear away all objections to that view. The monastic debates are not merely academics, more a way of using the direct implications of the obvious to generate an inference of a non-obvious state of a phenomenon. Debaters are seeking the understanding of the nature of reality through a very careful analysis of natural phenomena. This search for the basis of reality is the most essential part of a monastic debate.

Debating has had a long and distinguished history in Buddhism and during the early days if his teachings, the texts tell that he was of the opinion that a true monk argues with no one and stays apart from any public debates. However, there are later texts that show Buddha as a vigorous and successful debater, which have given rise to the modern use of debates in Buddhism. Originally, the Buddha simply taught those who were interested in what he had to say, but in a multi-religious environment in which he taught, and due to the natural tendency to critical inquiry into the beliefs and assertions of oneself, the need to explain and clarify his teachings to other religious leaders and laymen became necessary.

Over the years, as can be found in the ancient Buddhist texts, he became a master of debate, and was so successful in converting his opponents that he was often accused of using magic to sway their beliefs. In the later centuries, debating became a part of the normal life of the Buddhist monks, and played an important part in winning intellectuals over to Buddhism. It has also become a formal mechanism for the resolution of sectarian and monastic disagreements, and a person’s own critical engagement with the standard Buddhist doctrines. 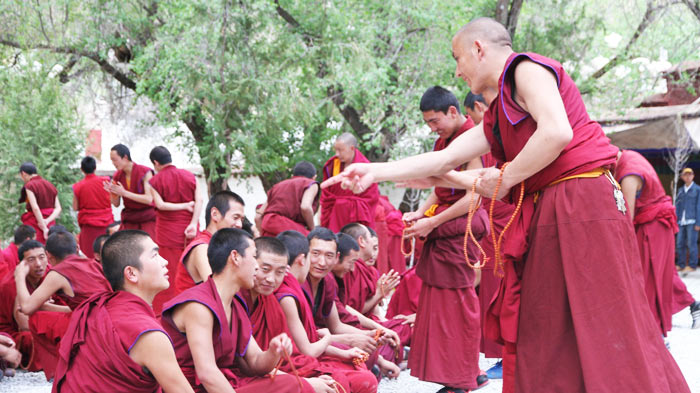 In the later centuries, debating became a part of the normal life of the Buddhist monks.

Debating was a true form in Buddhist doctrines before the religion first appeared in Tibet, and was used from the earliest days of the conversion of the Tibetan people to Buddhism. At the first introduction of Buddhism in Tibet, during the 7th century reign of King Songtsen Gampo, Buddhism was not taken in widely, and was mainly found to be centered in the royal court. It was almost a century later that it took a stronger hold in the region, during the reign of King Trisong Detsen, in the 8th century. During the 9th and 10th centuries, the religion took a firmer hold of the people, and became the predominant religion in Tibet, taking over from the shamanistic religion of the region, now known as Bon.

In 793, King Trisong Detsen sponsored a debate around the belief that Moheyan, a teacher of Chan Buddhism, did not hold the true Dharma. This is now known as the great Samye debate, after the place where it was held, Samye Monastery. The debate was held between the Chinese monk Hva-san and the Indian monk Kamalasida, who had been invited to Tibet by Trisong Detsen for the debate. Kamalasida won the debate, and Tibetan Buddhism went on to rely more on the Indian version of the religion than the Chinese version.

How Tibetan Monks Do the Debate

In modern-day Tibet, debate has become a part of the culture of Buddhist belief, and an essential part of the teaching of the path to enlightenment. Monks in Tibetan universities spend years studying the art of debate, and it is an important part of learning to sharpen the mind to aid the development of wisdom. In the learning and study of debate, the monks cover all of the main topics of the Tibetan methods of debate, as well as the teachings of developing wisdom. Combined with training in logic, a student learns how to clearly analyze and understand the teachings of Buddha. This is one of the most important parts of Tibetan monastic culture, as well as being a major part of the Buddhist religion in Tibet.

In Tibetan monasteries, debates are an everyday part of life, and an important part of learning. Monks debate almost every day, normally in the late afternoon and evening, and the debates can sometimes last for several hours each. The groups of monks normally pray for a few hours before the debate, to heighten their awareness and sharpen the mind for the philosophical debates.

Most monasteries have a designated area where the debates are held, and this can be a field, orchard or courtyard, depending on the monastery. At the start of the debates, monks are normally paired, with one monk standing and the other sitting. The standing monk poses the question that is the subject of the debate, and the sitting monk has to answer. As soon as the monk asks his question - which is normally composed of a logical argument on the philosophical teachings of Buddhism and includes many hand gestures and movements - the monk claps his hands together, signifying he is finished, and giving the sitting monk the time to answer. 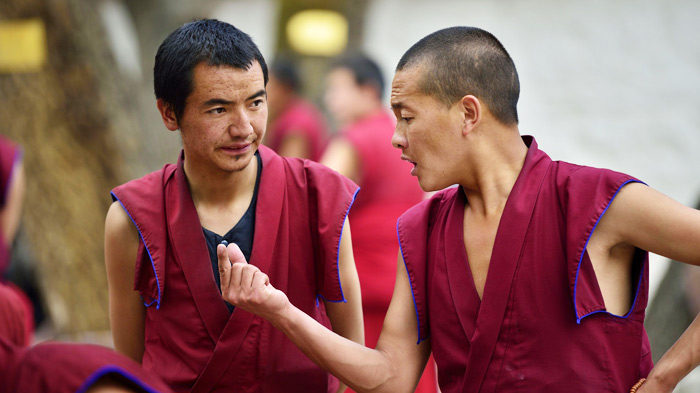 The whole debate rages back and forth between the two debaters, exchanging questions and answers in logical progression.

Another form of debate is with one monk asking the questions to a group of monks sat in a circle around the questioner, and the questioner gives his question and chooses one monk from the circle to make his answer. The refuting of the answer is then directed to another monk to continue the debate in a form of round-robin.

Tibetan debates are very animated and impassioned, as the whole debate rages back and forth between the two debaters, exchanging questions and answers in logical progression. A debate is a special system of logic where the debaters learn to work with the concepts of what they have been taught, and is a good way to train their thoughts to be logical and to use exact expression.

The form of the debates has been adapted over the centuries from the original Indian style of debating, and debates generally hold true consequences, which are logical implications drawn from the defender’s statements. While the questioner has an unlimited number of ways to ask the questions, the defender is limited in how he can form the answer to the questions. These answers include responses like:
“The reason is not established,” which is the way to deny the minor premise
“There is no pervasion,” which is how to deny the major premise
“I accept it,” which means the defender has accepted the argument and the conclusion.

The monastic debates at Sera Monastery usually start in the late afternoon, from around 3:00pm. Held in the inner courtyard, the debates are open to viewing from tourists and the local public. Debating in front of an audience is a part of their education, and the monks use several defined gestures to make their point. 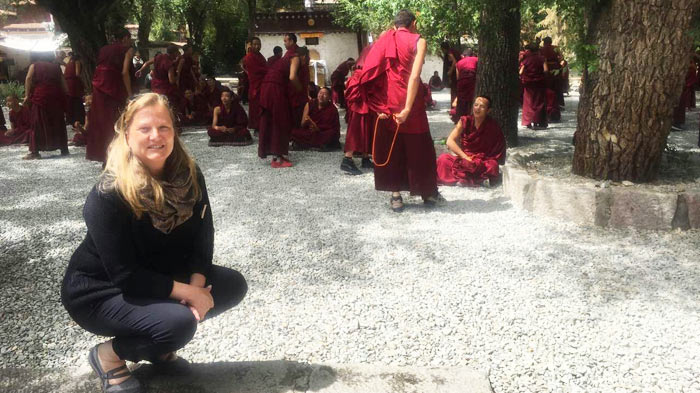 The courtyard is unique in that it is covered with crushed stone, and Sera Monastery has a long tradition of debating in this courtyard. In Sera, it is the senior monks who grill their young disciples on the various doctrines of Tibetan Buddhism. The senior monk will fire a question at the seated younger disciple, testing their knowledge of the Buddhist scriptures and their understanding of philosophical argument and logic. The dramatic hand slapping is part of the debate, and is the signal for the seated monk to respond to the questions.

As one of the primary monastic universities, Drepung monks study and debate on both esoteric Buddhism and Exoteric Buddhism, which studies the different instructions of the three disciples of Tsongkhapa. 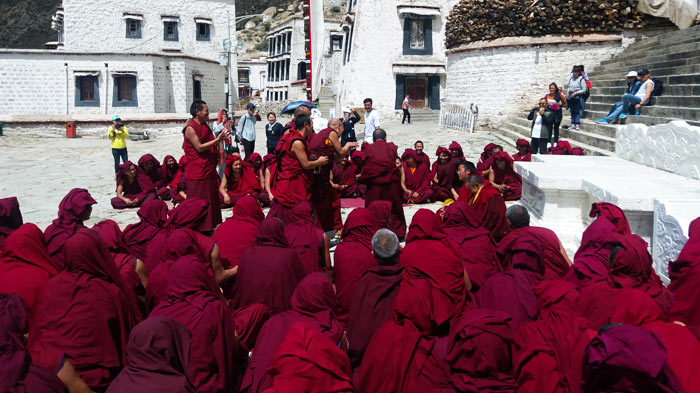 While the monastic debates are not on the large scale of Sera Monastery, they are a lot more intense, and well worth watching. The debating in Drepung starts at around 2:30pm, and lasts for several hours through the afternoon, and sometimes well into the evening. There are four Zhacangs (academies) in Drepung, and each has its own debating courtyard where the daily debates are held. Debates are usually internal in each Zhacang, and rarely happen between the different Zhacangs unless they are previously organized as part of the teachings. 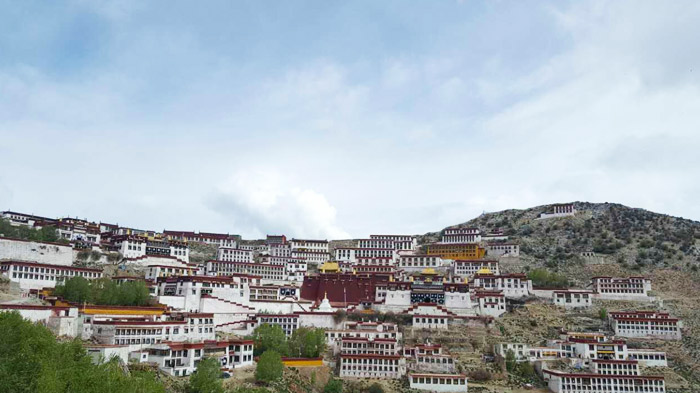 The monastic debates in Ganden Monastery are held daily from around 3:00pm, and can last all afternoon. The monks debate the sutras using traditional methods in any of the nine Debating Courtyards in the monastery. Ganden is also the primary monastery for the sutra debates of the graduating monks. Lamas from across Tibet who have passed their final tests will gather in Ganden to receive the highest academic degree in the study of Tibetan Buddhism. After the completion of the debates, the lamas will present a final dissertation at Jokhang Temple, before being given their “Gexe Lharampa”, which is the equivalent to a doctorate in modern education.

Thousands of people come to the monasteries every year to watch the debates in session. And while it is enjoyable to watch the monks in their debates, with the hand gestures and gesticulations and expressive movements, it is best to remain quiet while they are debating. Although you may not understand what is being said, the expressiveness of the monks can often convey part of their message, and interrupting them to ask questions, or disturbing their debate, is a major taboo. Enjoy the debates and have fun watching, but let them debate without interruption or disturbance, as this is part of their studies.

0 Comment ON "Monk Debate: A Bizarre Test of Tibetan Buddhism Study in Tibet"