Tibetan Prostration: A Way to Feel the Inner Buddha Nature in you

Traveling through Tibet, you can always see the snow-capped mountains and the stunning lakes, the grand monasteries, and the breathtaking beauty of the Tibetan plateau. However, one of the most impressive scenes you will come across in Tibet is the devout Tibetan pilgrims prostrating at the side of the road as they make their way to their pilgrimage destination.

Prostration in Tibetan Buddhism is performed as a wholesome spiritual practice to purify the mind from delusions, negativities, and bad karma. Just as reciting mantras and making offerings help to cleanse, so does prostration, either in front of a sacred site or on the road to the site.

Crowds of devout Buddhists gather outside the Jokhang Temple and perform local prostration in front of it.

Local prostration means prostrating without walking. The sacred Jokhang Temple in Lhasa, which worships the statue of Sakyamuni Buddha at the age of 12, sees hundreds of pilgrims performing local prostration in front of it.

Short-distance prostration refers to prostration when circumambulating a sacred or spiritual site, it can be the kora routes around holy sites such as the Jokhang Temple, Potala Palace, Mount Kailash, and holy lakes. 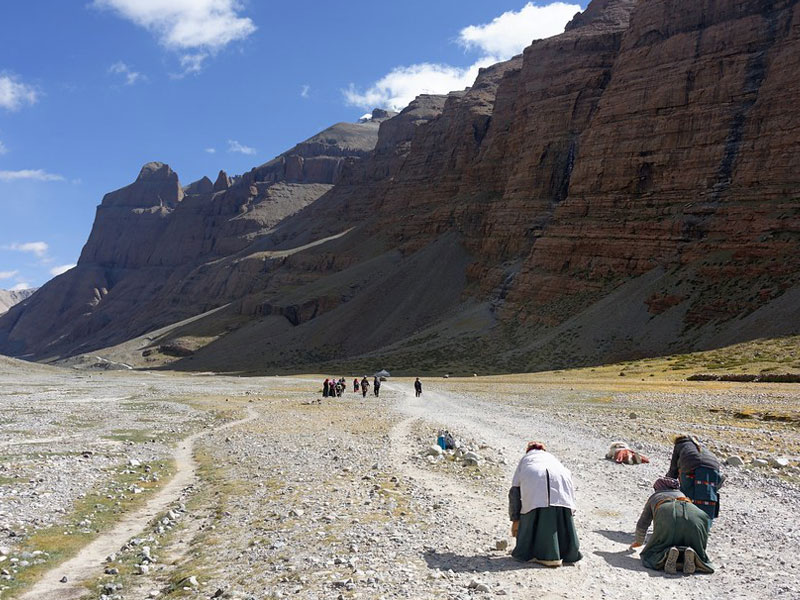 Pilgrims prostrate on the bumpy ground when circumambulating Mt. Kailash.

Located in Tibet’s western Ngari Prefecture, Mount Kailash is one of the most sacred sites for Tibetan Buddhists. Pilgrims to the mountain can often be seen prostrating along the kora route around the sacred site, genuflecting every three steps, for several months until their pilgrimage is completed. – Join in the 15 Days Kailash and Manasarovar Small Group Tour 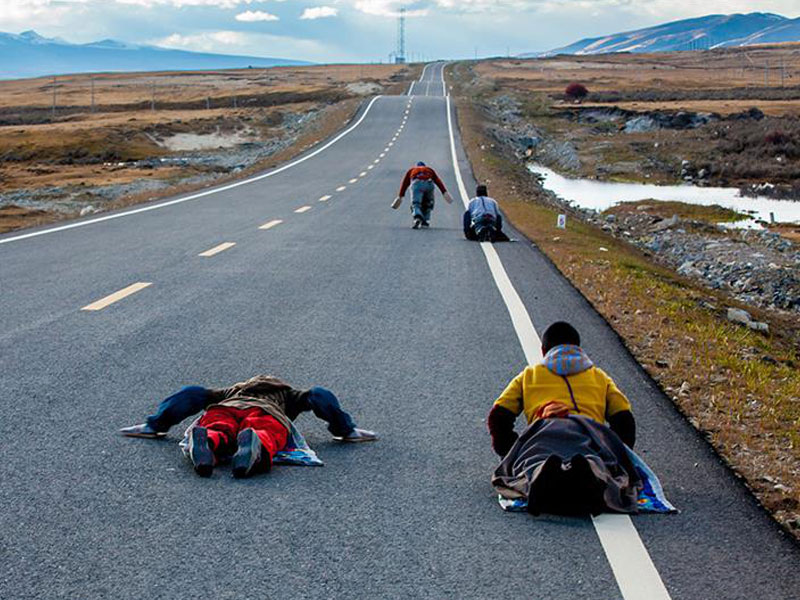 Pilgrims prostrating to Lhasa along the 318 Highway from remote areas between Sichuan and Tibet.

What is Tibetan Prostration?

Tibetan Prostration is performed by dropping to your knees and laying your body forward, stretching its full length on the floor, with arms outstretched above your head.

Tibetan prostration origins from the time of Buddha himself. The practice is as ancient as Buddhism itself, and in Buddhism, was performed in front of the Living Buddha in deference to his teachings, and to show reverence to the Triple Gem of Buddha, his teachings, and the spiritual community. In Tibetan Buddhism, prostration is known as the “Namas Kara”, which translates to roughly mean “I bow to the divine in you”, a reference to the divinity of Gautama’s Buddhahood and enlightenment. The term is actually from Sanskrit, where Namas means “bow” or “homage” and Kara means “doing”. A simple yet formal greeting in Sanskrit, the phrase has come to mean much more in Buddhism.

How to Perform Tibetan-style Prostration

1. Stand facing the sacred site with your feet together (but not so close that you are off-balance), and lift your hands into the prayer gesture in front of your chest. In the Buddhist prayer gesture, the palms do not touch together, and the thumbs connect along the outside edges, with the tips tucked down into space between your palms.
2. Raise your praying hands to a point directly above your head. Ideally, your wrists should connect with the top of your head or your “crown”.
3. Bring your praying hands down to your forehead or brow, and hold there for a second.
4. Keep bringing your hands down over your face to touch your nose.
5. Bring your hands back to their starting position in front of your chest.
6. Lower yourself onto your knees and bend forwards facing the ground, lowering your hands to the ground in front of you.
7. Lower your body to the ground into the “push up” position.
8. Stretch your arms out in front of you, repeating the prayer gesture with your hands and arms stretched out as far as they can reach. At this point, those performing long and short distance prostrations would mark the point where their hands touched the ground, as this would be where to step to for the next following prostration.
9. Keep your body straight on the ground and lift your praying hands above the back of your head.
10. Bring the hands back to the front, and then back to your body to return to the ‘push up” position.
11. Lift your body back up onto your hands and knees, in a reversal of the movement getting to the prone position.

Rollback onto your feet and rise to a standing position with your hands in the prayer gesture in front of your chest again, as in position 1.

In order to perform prostrations correctly, your entire body must be stretched out on the ground, hands above your head. When performing prostrations, you acquire merits for “every atom in the ground that is covered by one’s body”. The great Tibetan Lama, Purchog Ngawang Jampa said of prostrations: “If you believe in the benefits of making prostrations, you will feel, ‘If only my body, hands, and feet were longer.’”

Prostration has unparalleled meaning to Tibetan Buddhists. When Tibetans are prostrating, whether on the roads or in front of a holy site, make sure not to disturb them or even take a photo of them. It is ok to watch them to see how it is done, but it can be considered disrespectful to stare too long. If you want a more in-depth experience of the unique Tibetan religion, try prostrating for yourself, and feel the inner Buddhist Nature within your own body.

Kathmandu to Lhasa Tour by Bus: How to Plan a Tour from Nepal to Tibet by Bus

Essential Facts about the Accommodation at EBC in Winter

0 Comment ON "Tibetan Prostration: A Way to Feel the Inner Buddha Nature in you"