As one of the largest and most popular festivals in Tibet, the Shoton Festival actually dates back to around the 11th century, at a time when Buddhism in Tibet was recovering from the fractured period of the 9th to 11th centuries in the Tibetan Empire. The Indian lama, Atisha, was studying and teaching at Nethang Monastery at the time of the resurgence of Buddhism in Tibet, and instructed all monks and lamas to spend 100 days confined to the grounds of the monastery. The period was used for prayers and self-sacrifice, and the monks were not permitted to go outside the monastery to protect the small creatures from being harmed by the feet of the monks. 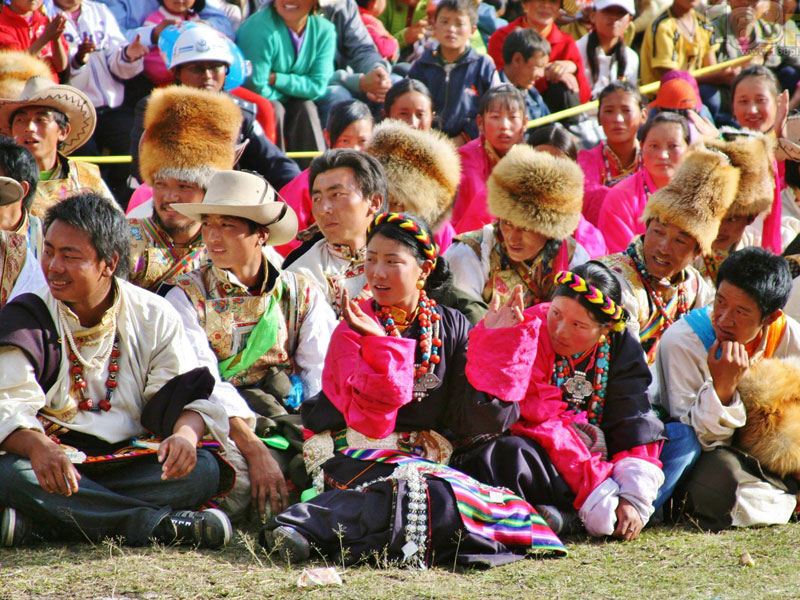 Locals gather together to celebrate the grand Shoton Festival with gorgeous Tibetan costumes.

This sacrifice of the monks on behalf of the common people was well-respected around Nethang, and would provide the rich curds from the yak milk, fruits, and seasonal vegetables and foods as a source of sustenance for the monks and lamas. Over the years, this changed to become the yogurt that each family would make and give as an offering and thanks. The first festival based on this historic sacrifice was held in the Drepung Monastery in the middle of the 17th century, and was later moved to the Potala Palace when it was completed in 1682. After the completion of the Norbulingka Palace in 1783, the festival was moved back to Drepung on the orders of the 7th Dalai Lama, with Norbulingka being the second host of the Yogurt Festival.

When to Enjoy Shoton Festival 2021 in Tibet

While the festival does last for around seven days, there are some major event within the period that is deemed to be special and sacred, and are amazing evens that you should not miss if you are in Lhasa for the period of the festival.

The main prelude to the whole festival is the unveiling of the giant Thangka in Drepung Monastery on the first day of the festival. In the early dawn light, as the sound of the Tibetan horns reverberates across the valley, where thousands of pilgrims and locals have gathered at the foot of the special Thangka platform to the western side of the monastery, around 100 monks carry the huge Thangka out of the monastery as mulberry smoke rises from all over the valley. Buddha exhibition in Drepung Monastery, one of the most important activities in Shoton Festival.

As the chanting of the lamas begins, the Thangka is slowly rolled up from the bottom of the platform. Pilgrims and locals alike rush to cast their white Hada onto the Thangka and kneel to pray at the hem of this ancient holy relic. Within two hours from its unveiling, the Thangka will be rolled up once more and disappear back inside the monastery, to be hidden away and protected for another year.

After the opening of the festival at Drepung, the main festivities of the event are normally held at Norbulingka, and one of the most popular performances of any festival, and especially this one, is the Tibetan operas that are held from the second day of the festival to its very end. The first performance normally starts at around eleven in the morning on the second day, and will continue until dusk each day. Enjoying Tibetan opera at the beautiful Norbulingka Palace in Lhasa.

Tibetan operas are plays based on history and legends from Tibet and Tibetan Buddhism, and a traditional Tibetan Opera can last for several days. For the festival, the operas are condensed versions, to fit several operas in each day, but still give the same meaning and lessons to the huge audiences that gather every day. Old and young alike, Tibetans of all ages and status will come to the park in Norbulingka to watch the festival performances of their favorite operas, and the park is dotted with colored tents that house entire families for the festival period.

Since the very essence of the Shoton Festival is based around the eating of yogurt, there would be no sense in not eating some while you are in Lhasa for the festival. In Tibetan, Shoton means “yogurt banquet”, though the festival is as much about the Thangka unveiling and operas these days. During the festivities in Norbulingka, Drepung, and other parks in Lhasa, people gather and eat copious amounts of yogurt, morning, noon, and night. You can enjoy the traditional Tibetan yogurt during the Shoton Festival.

Tibetan yogurt is somewhat different from the normal yogurt you might see in the supermarket back home, and is made from yak milk, instead of the normal cow’s milk, which makes it richer and creamier. Yak milk is high in butterfat, which is what makes it so creamy. The flavor is also much stronger, and a little sour, so most people in Tibet add sugar to sweeten the yogurt. Yogurt is popular all over Tibet, and you will find plenty of it during the festival to try.

How to Plan Your Shoton Festival Tour 2021

If you are planning to travel to Tibet for the Shoton Festival, then you will need to be on a pre-arranged tour of the region with a registered travel agency such as Tibet Vista. We have the perfect tour for your trip to Lhasa for the Shoton Festival, which gives you five days in the Tibetan capital to enjoy the best of the festivities at both Drepung Monastery and Norbulingka Palace.

The five-day Shoton Festival tour starts after you arrive in Tibet, and you will get to travel around the city and visit the main sights of this City of Sunshine, including the Potala Palace, Jokhang Temple, and the delights of Barkhor Street. On the third full day, you will travel to Drepung Monastery for the opening ceremonies and the giant Thangka unveiling ceremony, after which you will get to visit the amazing Sera Monastery, with its unique and explosive monastic debates held in the debating courtyard every afternoon.

On the following fourth day, you will get to travel in the morning to the Norbulingka Palace, and spend the day experiencing the amazing performances of Tibetan Opera, enjoy the company of the local Tibetans and pilgrims that travel across the plateau to the festival, and taste the delights of sweetened Tibetan yogurt. Held in the stunning gardens of the Summer Palace, you will be able to wander these beautiful gardens and enjoy the spectacular views, hundreds of trees, and the beauty of the local natural plants and flowers.

How to Get to Tibet for Shoton Festival

Getting to Tibet for the Shoton festival can be done in one of two ways: you can take a flight from mainland China or Nepal to Lhasa, or you can travel by train along the stunning Qinghai Tibet railway to the capital on the Roof of the World.

Flights to Tibet depart from more than two dozen cities across China daily, including Beijing, Chengdu, Chongqing, and Xi’an, to name a few. Flight durations and prices do vary depending on the departure location, with Beijing and Chengdu being the two most popular.

Trains to Tibet depart from seven gateway cities in China, including Guangzhou, Shanghai, Beijing, Chengdu, Chongqing, Lanzhou, and Xining. Travel time varies from 22 hours (from Xining) to around 55 hours (from Guangzhou), and ticket prices vary accordingly, with Xining being the cheapest and Guangzhou the most expensive. Chengdu is one of the most popular departure locations for the trains to Tibet.

Dining and Accommodation during Shoton Festival of Lhasa 2021

For the duration of your trip to Lhasa for the Shoton Festival, you will be able to stay in a hotel in the city, and the standard of hotel you choose is entirely up to you. Lhasa has a huge range of hotels, hostels, and guesthouses that are open for international tourists, and can provide accommodation up to and including five stars. The cost of the hotel you choose to stay in is included in the price we quote you, and we will make all the arrangements and bookings/reservations for you. You just need to let us know what your requirements are, and we can help with our best recommendations based on your criteria.

Meals in Tibet are normally included in the hotel, as almost all hotels provide you with breakfast and your evening meal. The type of cuisine does depend on the hotel you choose, though most hotels do have a wide range of dishes for you to choose from. Your midday meal is not included, and there are a huge number of cafes, teahouses, and restaurants throughout the city to choose from. You just need to talk to your guide about what you want, and he will be able to give you some good restaurant choices that can cater to your requirements.

The Shoton Festival is a very popular festival for Tibetans, and is an important religious event as well, since the festival began as a wholly religious ceremony. Whilst attending the Thangka unveiling, it is important to remember to respect the religion of the Tibetan people and behave with modesty and decorum. Tibetans are devout Buddhists, and there are some rules to remember, such as:
1. Tibetans are sensitive about their religious beliefs. Do not touch the heads of children and monks in Tibet as they believe that the gods inside their heads will get offended.
2. Follow the examples of the people around you when faced with delicate religious artifacts, and do not touch the Thangka. However, it is ok to have your own white Hada to throw if you wish. Tibetans love it when visitors join in with their ceremonies and celebrations.
3. Do not take photos of the people without their permission. Tibetans do like to have their privacy respected, so please be civilized and respect that. Many will say yes if you ask them politely, and will often take a selfie with you.
4. Always receive a gift from a Tibetan host with both hands together, even if it is just a bowl of yogurt or tea, as it is impolite and ignorant to accept it one-handed.
5. Allow yourself time to acclimatize to the increased altitude before trying to get too energetic in Lhasa. Altitude sickness can often get worse if you try to overdo the strenuous activity. Follow your guide’s advice on dealing with altitude sickness.

0 Comment ON "2021 Shoton Festival of Lhasa: biggest cultural gala you shouldn’t miss out in Tibet Tour"