The route to Lhasa from Chengdu in through highway G317 traverses many places of cultural and religious significance to Tibetan Buddhism. It passes through parts of Kham Tibet and many other Tibetan occupied areas in China before entering Tibet. Apart from rolling grasslands, towering mountains, pristine lakes, and endless switchbacks, the route is also graced by plenty of temples and monasteries. Temples and monasteries are the physical manifestation of the religious beliefs of people. They are a big part of people’s life and more than just a place of worship. Even if you want to know about the culture of Tibetans visiting monasteries will make you understand as culture and religion is intertwined. Here are some of the must-visit monasteries on Sichuan Tibet Highway northern route G317:

Tagong, located in Garze, is a picturesque town located at an altitude of 3,800m. In addition to Tagong temple, it is home to the endless grasslands, nomadic Tibetans, their Yaks, and dedicated monks. Located on the Sichuan Tibet highway, this temple enjoys a history of more than 1,000 years old. With vast tagging grasslands surrounding it and Mount Yala in the background, Tagong temple is located in a postcard perfect setting. Built during the time of Qing Dynasty, this temple was built to honor the journey of Princess Wencheng, who was on her way to wed the king of Tibet Songsten Gampo. The temple consists of a main hall, pagoda hall, statue hall, prayer wheel corridor etc. 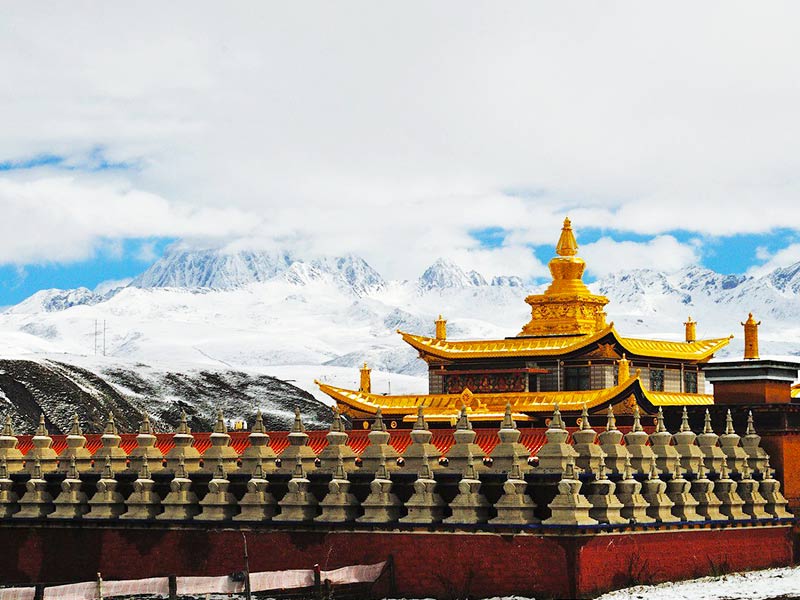 Tagong temple enjoys a history of more than 1000 years old

Tagong also houses another monastery named Lhagang Monastery. It is located scenically in the foothills of Yala Mountain. It has an iconic Muya Golden Pagoda built in 1997. It is said to be 100 kg of pure gold located in the middle of four towers.

This monastery with academy sprawls majestically over the mountains of Sertar County in the eastern side of Tibet. Founded in 1980, Larung Ngarig Buddhist Academy is said to be the biggest Buddhist Institute in the world. Thousands of students, monks, and nuns travel from all over the world to study here. Surrounding the main building, which consists of the monastery and study halls, you can see an endless wave of red block houses. The long winding road running behind the monastery divides the monks and nuns living quarters. View from afar makes it look like the monastery is surrounded by all sides by a red sea. In spite of its remote located, the monastery became steadily popularly over the years. At one point, it was housing 40,000 nuns and monks. This place is not easily accessible; tourists have to go a little out of the way to find this place. Till a couple of years ago, tourists were not regularly allowed to go, but in the recent years it has been accessible to all. There only one place to stay and very few restaurants to have from here.

Also known as the Derge Parkhang, this monastery plus printing press is one of the must-visit, star attraction in this road trip, even in the whole of Sichuan. This centuries old monastery was built in the year 1792. Located in Dege, this place is the cultural centre of Kham Tibet. This place is more than a monastery, it is also a place where some of the oldest literature in the world. It holds the only copy of wooden blocks that about Indian Buddhism. This place was founded by the fortieth King of Derge. The printing is still done in one of the oldest methods of printing in the world – traditional woodblock printing method. Watching them doing all the printing manually takes you back in time. 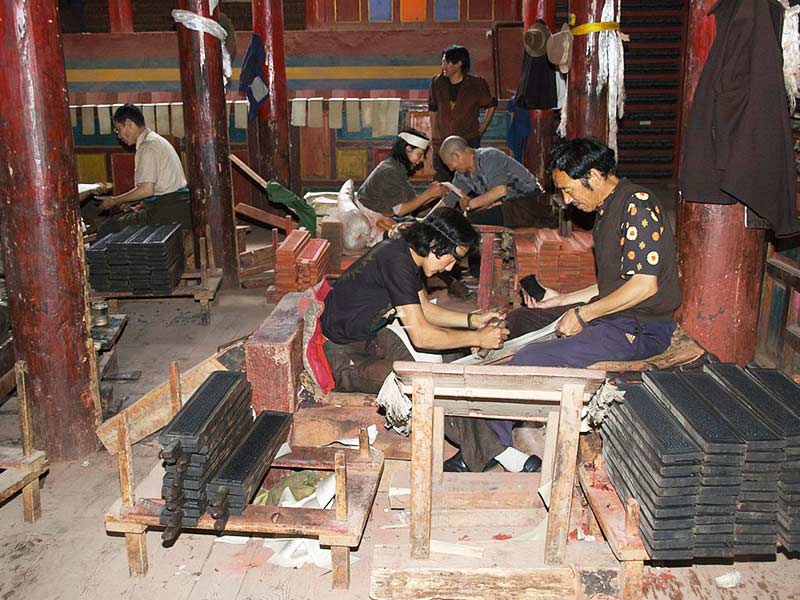 There is a monastery main hall, two levels of chapels which have beautiful murals, and upper levels are for printing and storage. The printing press still publishes Buddhist Sutras, and literature related to science, mathematics, technology, history, and many more. It advised that you take torch lights with you to enjoy the intricate designs of the murals. Photography is usually not allowed inside, but it doesn’t hurt to ask them if it is okay to snap a few pictures.

Located in Chamdo, this monastery is located where two rivers – Ongqu and Zhaqu – meet, which mergers into Lancang River, a very famous river in Chamdo. From the viewing platform in the monastery, you can see the two rivers merge into one. The monastery is only a 20 minute walk from the main square. It was constructed by a disciple of Tsongkhapa sometime between the years 1436 and 1444. Jampaling Monastery is located at the junction of the two rivers

It once contained five main temples and housed around 2,500 monks. The monastery was once destroyed in the year 1912 and was rebuilt in 1917. Even though it doesn’t house as many monks as before, it still has an important place in the history and still religiously significant. The exquisite architecture, thangkas, Buddhist sculptures, and beautiful murals are some of the highlights of this monastery. Good news is that photography is allowed in this monastery.

This is a unique looking monastery with its distinctive red, black, and white high outer walls. It is located 30km north of the Riwoche Town. At an altitude of 3,400m, the town is located in the Kham region, 134km from Chamdo. Located on a hill, this is one of the important monasteries in Kham region which was built in the year 1276. It is a three stories monastery which has been only recently rebuilt again after destroyed in the year 1985. Riwoche has been a significant contributor to Tibetan arts and music till today. This monastery does not usually see a lot of foreign tourists because of its remote location and is pretty much the only attraction in Riwoche. 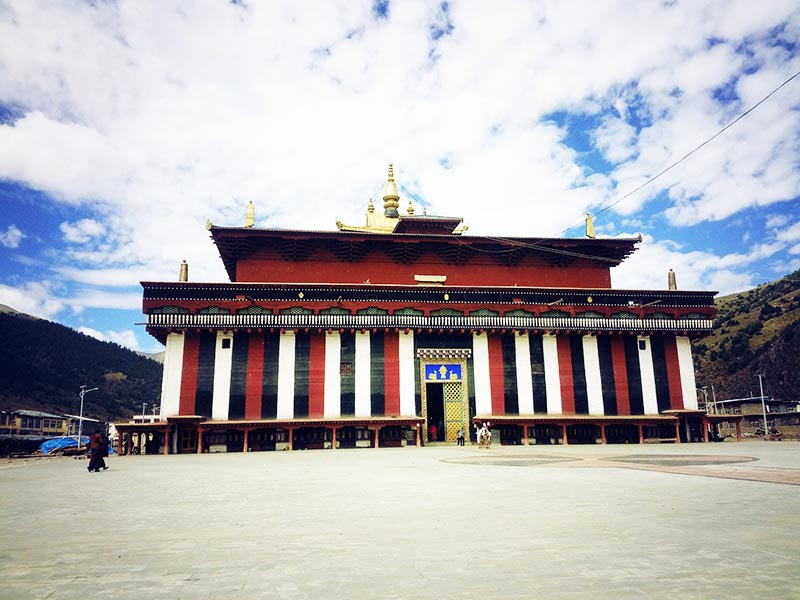 Riwoche Monastery is a unique looking monastery with its color 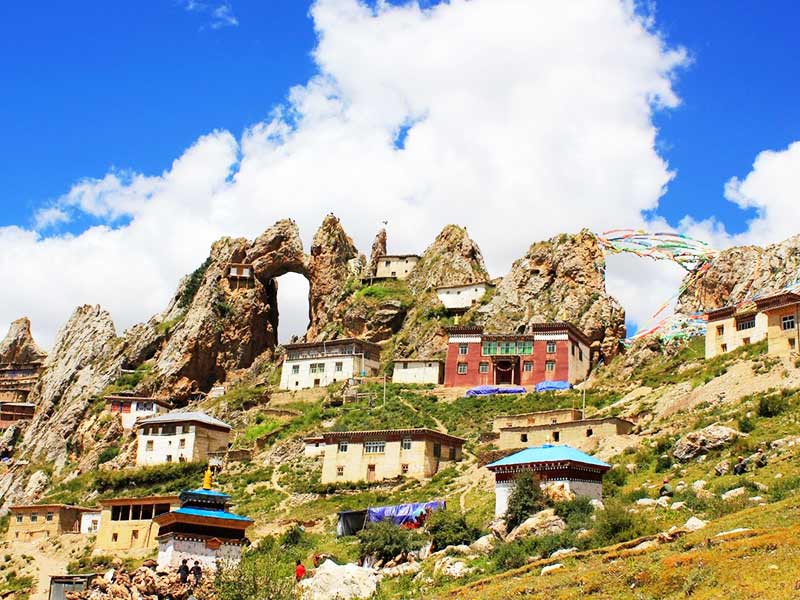 Located in the centre of old Lhasa city, Jokhang Temple is the spiritual centre of Tibet. Built in 647 AD, it covers a total area of 2.51 hectares. There is no dearth of things to do in Jokhang Temple. The main attraction of this temple is the life-sized statue of Shakyamuni. It is not only a treasure of the temple but also one of the holiest objects in Tibet. There are hundreds of Buddhist statues and elegant murals all over the temple. Being one of the oldest temples in Tibet, it also has the pride of being one of the oldest civil structures in Tibet. Jokhang Temple is the spiritual centre of Tibet

As you climb onto the higher levels, seeing the view of the temple is truly amazing. The view from the rooftop of the temple is even more amazing. You can see the full view of Potala Palace in all its glory. The architecture of the temple is something that deserves to be observed closely. The temple is the prettiest when it is fully decorated for the Tibetan New Year. Colorful prayer flags and butter lamps light up the whole place.

Visiting these temples and monasteries in Sichuan Tibet overland tour will not only give you an insight into the culture and religion of the people, but also an insight into the history. A lot of these temples and monasteries have withstood some harsh times and oppositions. The belief and unshakable persistence of the followers of Buddhism is truly something to marvel at.

How to Plan a Trip to Nepal?

Sichuan Tibet Routes: How to Get to Lhasa from Chengdu by Railway, Highway or Flight?