Tibet Autonomous Region or more popularly known as Tibet has many variety of experiences to offer to the enthusiastic wanderlusts visiting her. And except for its cultural and scenic charm, the festive spirit of the entire Tibet makes the travelers want to go back to her again and again. A lot of popular and unique festivals are present in Tibet, like the Shoton festival, Onkor festival, Linka festival and numerous others. Amongst all these festivals, horse racing is also adopted as a significant festival by the Tibetans in their culture. In this article, we are going to describe in details what the horse racing festival is meant and the various other details of the festival. Tibet is chiefly a mountainous region and therefore from the ancient times only, horses have been one of the most important means of transportation for the Tibetans. The Tibetan culture also ensures the worship of each important aspects of nature that not only hold great religious value but also importance.

Hence, with this cultural heredity, the horses along with the yaks have come to be celebrated, because of the fact that Tibetans acquire a great help from them. Horse racing festival is one of the biggest festivals in Tibet.

In many parts of Tibet, motorcycles are still inaccessible and horses are the only way to get access. Hence many Tibetans raise horses and cherish their intimate bonds with the horses. They treat the horses as their closest friends. Thus with this, the horse racing festival has come into being. In the recent years, it has also been promoted as a tourism event consciously by the government of Tibet. Thus with this, Tibetan Horse racing festival has come into vogue gradually.

Significance of Horses for Tibetan People

The horses play a vital role in the lives of the Tibetans. In an area where accessibility to many regions is questionable, the sturdy horses come to rescue. Even if Tibetans have turned towards many vehicles like cycles and motorbikes, the horses will still hold their importance. 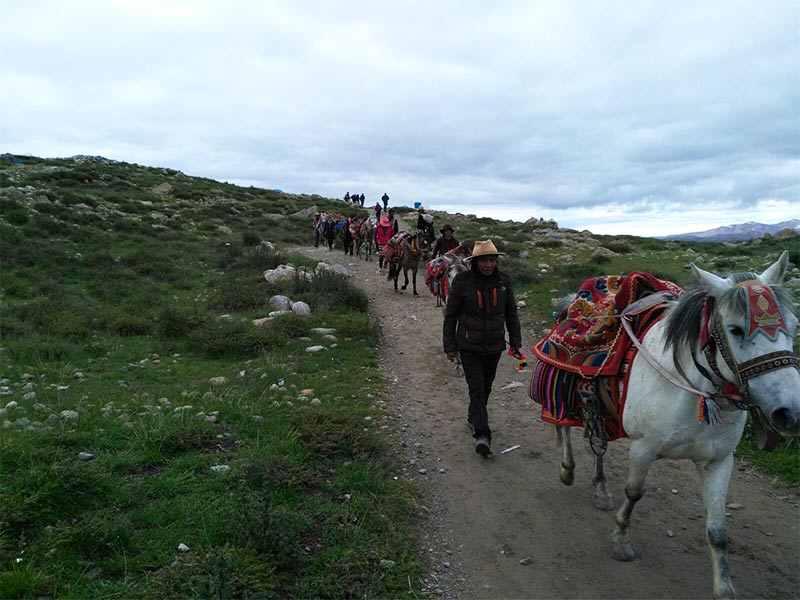 Even now, motorcycles are not accessible to many routes in Tibet where horses can easily reach. Also horses serve as important porters in the hiking routes like the route to Everest Base Camp and Mount Kailash Kora. They not only help you to ascend and descend the difficult path, but also their strength helps you to carry as much luggage as you want. Therefore Tibetans indeed treat their horses with great care. They raise them up and care for them like their own family.

Traditions and Customs in the Festival

In the horse racing festival, the Tibetan riders get a chance to show their skills and manliness. Therefore, it can be easily understood that riding on the horsebacks, racing and indulging in other games are a significant part of the festival. You have to wear your best folk dresses and also new dresses for the festival, complemented by the jwelleries.

Also you have to raise the horse and feed it sumptuously particularly in these days. You have to take extra special care of your pet horses in these days. Also except for taking care of your horses, there are other customs and traditions. You have to wear your best folk dresses and also new dresses for the festival, complemented by the jwelleries. The horses are also similarly adorned with colourful ribbons, laces, flags and other decorative materials.

In the first day of the festival, people only dress up and make acquaintances. They have a gala party constituting of dances and entertainments and some of the most delicious Tibetan cuisines. After the first day, the various sports indulging the horses start. These include archery on the horse back, single horse race, double men double horseback race, shooting on horseback and many such other games. There are also tug of war, singing, running and dancing competitions. The winners of the competitions receive prestige and honour amongst the Tibetans. Also people before and after the festival gets enthusiastic and buy horses also. Even Buddhist ceremonies occur in this festival along with other rites and rituals. 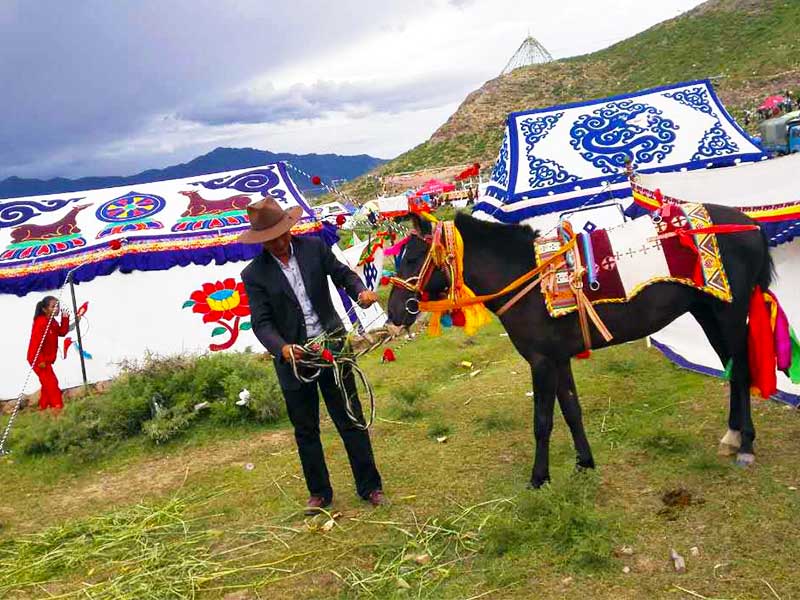 Tibetan people decorate the grassland of the Nagqu county with colourful tents and flags.

Nagchu offers some of the best moments of the horse festival. Before the horse festival starts, the local Tibetan people decorate the grassland of the Nagqu county with colourful tents and flags. Men and women dress up perfectly in traditional folk dresses and make acquaintances. There is an exhibition of the various Tibetan handicrafts which can be even bought.

The festival is accompanied by the delicious Tibetan foods which are the perfect treats to the tongue. Except for that, you will also encounter local dance and songs and opera performances. There are other types of competitions like tug of war, yak race and stone raising and long jumping. Along with these things, obviously there are performances indulging the horses. It is indeed a treat to the eyes with the riot of colours and the skills of the Tibetan people and Tibetan riders. The whole atmosphere is one of merriment and joy and therefore Nagchu should only be visited during this time of the year when you can witness the true spirit of festivity.

Gyantse horse racing festival is one of the earliest of the festivals, as ancient as the 1400s when there was the athletic competition involving the horses. With the passing years, this athletic competition became an important inter-village competition and with this the Gyantse horse racing festival gradually came into being. With time other important ceremonies like Buddhist worship ceremonies also got added, making it one of the biggest festivals of time. 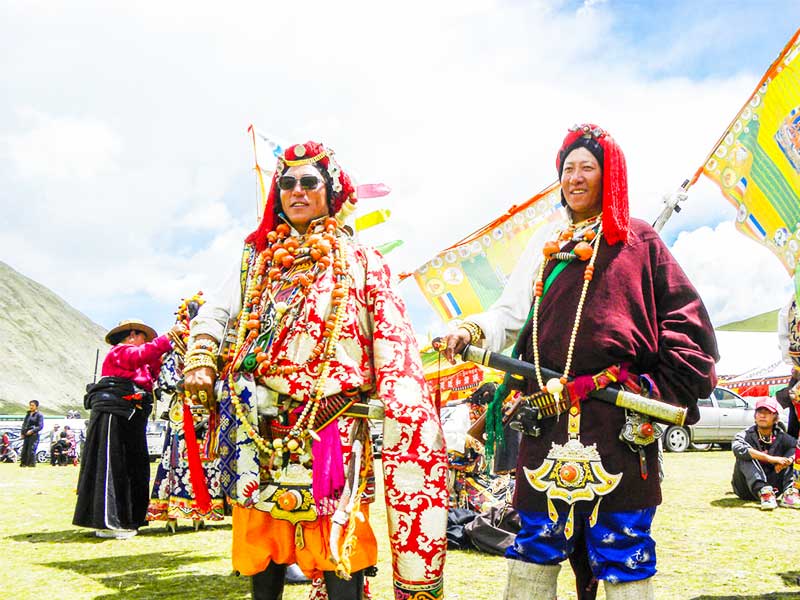 Gyantse horse racing festival usually starts at late June or early July which roughly constitutes the fourth lunar month of Tibetan calendar. Gyantse is also located very near to Lhasa and it might take five hours of drive to reach Gyantse via Shigatse from Lhasa.

In the Gyantse horse racing festival, you will get to see the local Tibetan people, dressed in ethnics and the horses are also decorated with beautiful colored flags and ribbons. There will be colourful Tibetan tents full of spectators watching the shows. The competitions include horse-racing, yak racing, ball games, track and field events and even wrestling.

In this festival, also people come to sell their handicrafts and buy other things or exchange their hand made goods with other people. The Tibetan operas perform and a lot of dance and singing occurs here. There is even an archery competition taking place here. You can also behold the traditional butter system in this festival. Thus overall the festival in a way helps you to get acquainted with the authentic Tibetan culture of the time.

Damgxung horse festival is also known as Damg Jiren festival in Tibet. The festival began with the usual horse-riding, commodity exchanging ceremony added with a bit of harvest festival. However quite after a few years, the lamas started chanting scriptures in the festival, making it a more religious oriented festival with political under hues. 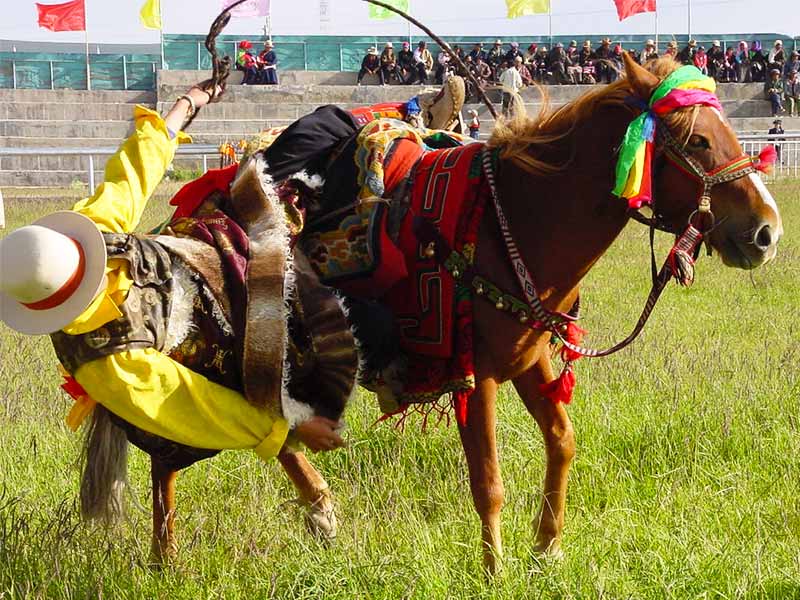 You will get to see the horse racing with skilled riders.

Usually it is held in the month of August which is actually 10th to 16th July of the Tibetan calendar. The festival usually occurs at Karba meadow which is about 4300m above sea level, in the Damgxung County.

From Lhasa, you can book a ride to Damgxung and reach easily. In the Damgxung horse racing festival, you will get to see the horse racing with skilled riders. They usually indulge in picking up prayer flags or small targets while riding.

Apart from this, you will get to see the handicraft market with people exchanging commodities. People dress up beautifully in local dresses with young men and women indulging in romantic pursuits. Singing, dancing and celebration of the new harvests form an important part of the festival. Archery is also a significant portion of the festival. Thus, the atmosphere becomes one of merriment and happiness during this time.

Yushu is located in the Qinghai Province which is accessible in every way, either by flight or by Tibet train. The horse festival in Yushu usually occurs during late July and early August. As in the other horse festivals, horse racing and other types of athletic festivals are extremely popular here. Along with that, people gather in the field with colourful tents above. They get dressed in traditional costumes and jwelleries and participate in the enjoyment together. Here also, different types of horse races are held along with singing, dancing and food distributions. 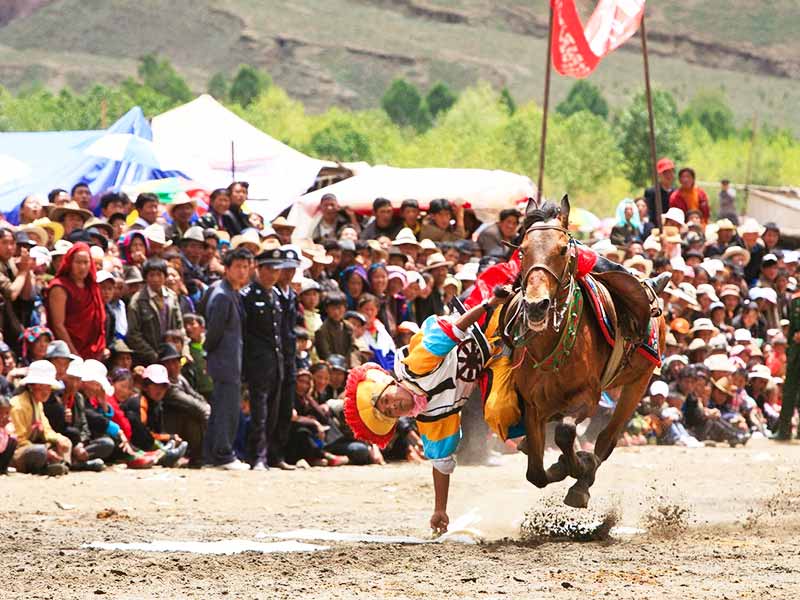 While in the horse back, they also indulge in picking up objects and shooting the objects.

There is a proper placement of honour and prestige for people who win the competitions and own the best horse. Thus it is a sort of hierarchical festival amongst the Khams or the nomads. Like the other horse festivals, it includes singing and jumping competitions. While in the horse back, they also indulge in picking up objects and shooting the objects. Thus Litang horse festival also holds its uniqueness in its own celebrations.

How to Plan an Overland Tour from Lhasa to Kathmandu?