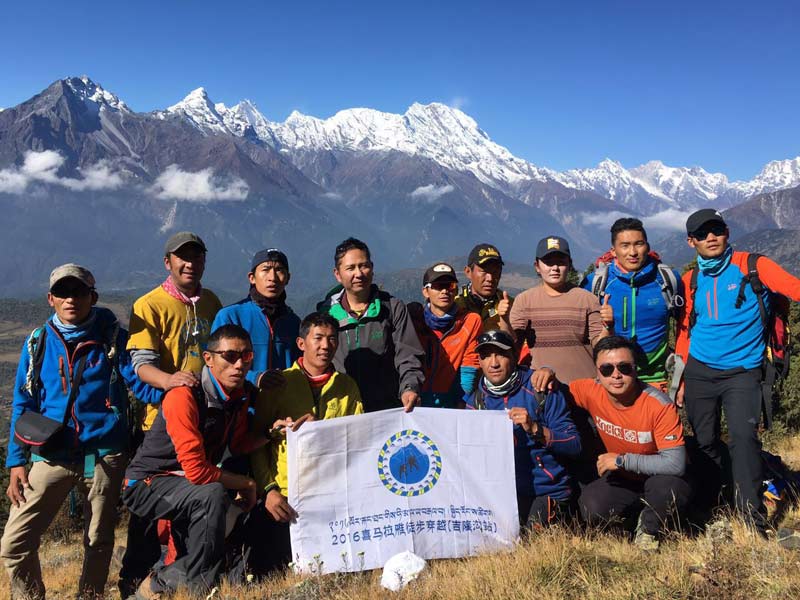 2016 Himalaya Trek has come to a successful end.

Sponsored by the Tibet Autonomous Region Sports Bureau and Shigatse City Government, 2016 Himalaya trekking via Gyirong Port has rounded off on October 27th. A total number of 52 participants have attended this grand event. Trekking at the foot of Mount Xixabangma The support staff were cooking for Himalaya trekking team. Himalaya trek 2016 was launched on October 22nd. In the past seven days, the whole team has smoothly completed trekking from Tingri County to Gyirong Port. Not only they have got closer to Lang barak glaciers and Mount Xixabangma, but also appreciated the tranquil Pekucuo Lake and Langji Lake. The highland scenery varies from snow-capped mountains, ice glaciers, lakes, moorland to forest, streams, flora and fauna. The complex Tibet climate and diverse natural landscapes have left an unforgettable impression on Himalayan trekkers. Yesterday, all the hikers have been awarded with commemorative medals in Shigatse and then driven back to Lhasa. Hence, 2016 Himalaya trekking came to a successful conclusion.

Shigatse, the core area of the Himalayan mountaineering industrial belt, has the world’s highest peak-Mount Everest and numerous unique mountain resources. However, due to its weak outdoor infrastructure and a limited number of professional mountaineering staff, most of adventurous walkers prefer to do Himalaya trekking in Nepal. “Shigatse has the absolute advantage in resources. Based on international Everest trekking service center and other major projects, we shall strive to build Everest demonstration area and Himalaya trekking model zone through the sports tourism industry. Besides, we shall guide the masses to fully participate in the sports tourism service and share more achievements in sports tourism development so as to lift people out of poverty as soon as possible”, said Hu Bin, the Director of Sports Bureau of Tibet Autonomous Region.

0 Comment ON "2016 Himalaya Trek Through Gyirong Port Rounded Off"