Tibet never fails to surprise the visitors as it has some vast untainted treasuries in it. In each nook and corner of Tibet, you are going to find some mosques or pagodas or other such buildings and relics that are vehemently carrying the age-old cultural importance bestowed upon them. Amongst many such popular and not-so-popular buildings and palaces in Tibet, one such is the famous Canggu Nunnery, located in Lhasa. Canggu Nunnery is considered to be the first Buddhist nunnery in Tibet, having places for women who have either started with the studies of Buddhism or are preparing themselves for doing so. Also women seeking peace of mind and total salvation and respite from the stark realities of life, are also invited here for staying and indulging in the peace here. In the present time, there are about hundreds of nuns living in this nunnery. There is a temple known as Canggu Temple. The temple is well-maintained, clean and neat even if it is not extraordinarily spacious. The stone steps lead to the front of the nunnery and the temple and inside the nunnery, the windows are latticed with black colours and the walls are beige colored.

The whole region is decorated with neatly maintained flower pots and short herbs. The temple is separated into a hall for chanting prayers only and another hall for daily activities. The temple initiates several ceremonial festivals and they worship Buddha Tara and Goddess of mercy. Each morning, at around 8:00 AM, the nuns go down to the recitation or the prayer hall and chants prayers ritualistically. If it is an official festival, it lasts till 4PM in the evening.

Tsamkhung Nunnery being the only nunnery in the old city of Lhasa holds quite a lot of importance and significance. Unique features and beautiful planning of the place have made it all the more enticing and favourite amongst the tourists. There is a unique underground chamber where Strongsten Gampo once meditated and achieved his enlightenment. The nuns work very sincerely here to keep the cave clean and lights the lamps. 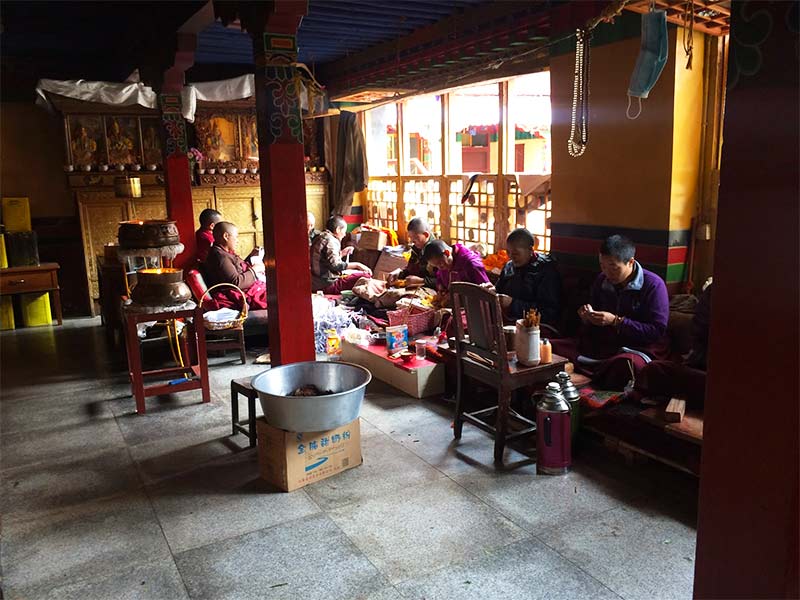 There are about hundreds of nuns living in this nunnery.

Except for this beautiful underground cave, the nunnery is associated with special features like raising funds all by themselves. The nuns here work indefatigably like running a clinic, a delicious teahouse, selling trifles that are both cheap and good in quality. By these, they raise money for the maintenance of their nunnery. Also, partaking in the great Tibetan festivals, the nuns have a lot of unique features embedded in their nunnery.

Amongst the activities of the nunnery, the basic is the devotion of the time to a life of prayer and study of Buddhism. The youngest of the nuns are none more than sixteen years old girls. There is a clear distinction because of which the younger people live downstairs and the elder people upstairs. Their main indulgence besides the prayers is the maintenance of the whole nunnery.

It is remarkable how the unified efforts of the nuns have kept the place so clean and attractive. Also because they raise their funds all by themselves, they run clinics, teahouse and spend their time in making certain trifles and items for sale. Also religious texts are printed here, that keeps the nuns busy. Weaving, making handicrafts and sewing are some of the activities that go on in this beautifully remarkable nunnery.

The famous Canggu Nunnery has cultivates tea inside it. It also bears a small garden full of tea trees inside. Like every other object of the nunnery, the tea garden is also taken great care and as a result we get to drink the loveliest sweet tea from richly cultivated tea trees. The sweet tea house in Canggu is very famous amongst the tourists. Sweet tea is made from Yak butter, tea and sugar. There are big umbrellas planted for the travelers to take rest. 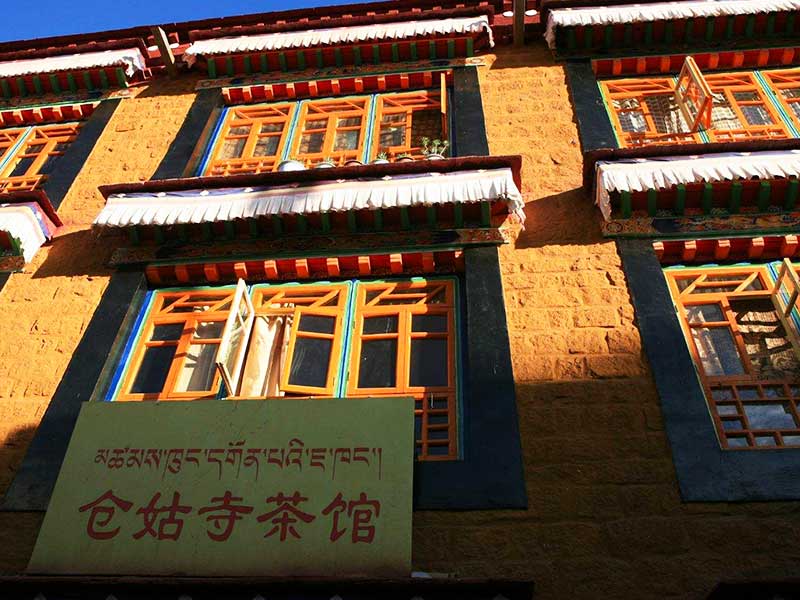 Also, as the tea house is located in the South Linkuo Road, near Barkhor Street, it attracts many pilgrims owing to the fact that Barkhor Street is one of the most famous kora routes in Tibet. The travelers are also attracted because of the remarkable quality of the tea served here that instantly refreshes tired minds and bodies. Tibetan noodles and stuffed steamed buns are also made and sold here that can be taken as the side dishes, along with the tea.

The opening hour of this famous tea house is between 8:00AM in the morning to 8:00PM, in the evening. A pot of tea costs around 7CNY, which is indeed very cheap. The buns may cost around 5-10 CNY and a plate of Tibetan noodles may cost around 10-15 CNY.

Potala Palace can be easily said to be the greatest of the tourist attractions in Lhasa. It is also known as the winter palace of repose and respite of the Dalai Lamas. There are many houses, chapel and towers in the vicinity of the palace. There are two types of buildings-the Red building and the white building. The palace has an enticing architectural beauty in it. The tourists are attracted to the palace for many reasons. Firstly it is a rich storehouse of the grand old Tibetan cultures and relics. Within the palace, you will be able to find the 698 numbers of murals, exotic Thangkas, paintings on silk, paper or cloth and framed by satin colour and other such crafts. Also there are a great number of precious statues, Buddha statues, a silver statue of Padmasambhava, wood carvings and clay sculptures inside it.

There are many stupas and Buddhist schools also for propagating Buddhism. Also, Potala Palace is a great place for photographic exploration. You can even organize wedding phototgraphy over here. You can also take the photography from Chakpori hills and Potala Palace square. However panoramic photography is allowed but cameras inside the palace require special permission. Always carry your Travel Permit with you.

Jokhang Temple is another most important tourist attraction around Canggu nunnery. The temple is very significant as it is a site of a distinct kora route. However, except for the prostrated pilgrims, exercising in kora, Jokhang Temple also provides other attractions within it. There is a life-sized statue of Shakyamuni in it. You will get to see some exquisite murals and about hundreds of images and statues of Buddha. There are some exotic Thangkas also, depicting the life stories of the important teachers in Tibetan Buddhism. Except for the various items to see, the serene atmosphere of the Jokhang temple with the constant chanting of the monks is worth visiting for. Surrounding the Jokhang temple, the Barkhor street is also a very significant kora route. However, besides the circumnavigation of the pilgrims along this path, with the constant chanting of the mantras, there are a lot more attractions in Barkhor Street. The most important is the market present here. It can be said to be the representation of the whole Tibet in miniature form. Every exquisite object, from all over Tibet can be found in this small street. The area is known more for its shopping stalls than its significance as a kora route. You will find prayer wheels, Thangkas, Tibetan jwelleries and spices and herbal medicines, caps and woolens here. 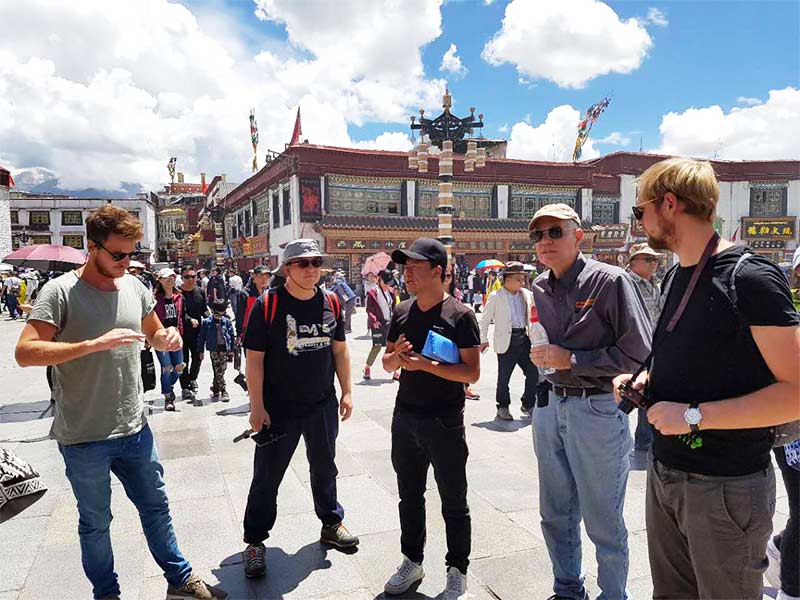 The place is very much well known for providing some of the best sweet tea and authentic Tibetan delicacies. Also the place is very significant for its photographic pleasure. It is always to be kept in mind that shopping in Barkhor street means you have to master the art of bargaining. Also do not buy the jewelries or the exclusive and costly materials from street side stalls. Rather go to some big registered shops for buying such materials. Even when you want to buy the medicines, it is better that you buy them from some renowned shops rather than any street side stalls.

Lhasa river, also known as Kyichu River, is the longest tributary of the most significant river namely Yarlung Tsangpo. Lhasa river has a great importance for the city of Lhasa in Tibet. Except for the economic and environmental significance, there is a lot more attractions in and around Lhasa river. There is this beautiful Lhasa-River bridge, more like an over bridge that has become the trademark of the Lhasa city. 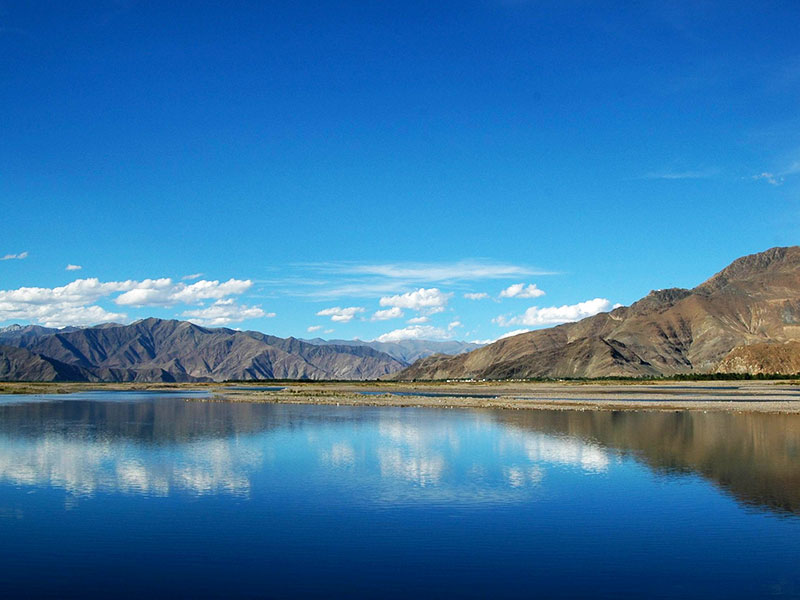 Also you will be able to enjoy the exotic butter sweet tea and delicious platters around the river. There is scope for camping and fishing beside the river. You can also bathe in the river. Holidays are spent with much fun around Lhasa river. There is this famous Qushui water burial platform that was once the sky burial site in Lhasa. So overall, Lhasa river is also a major attraction for people visiting Cunggu nunnery.

Tibetan secularity is best proved by the simultaneous presence of pagodas, chapels and monasteries in there. Thus, the presence of a mosque in Lhasa, also is no element for surprise for the tourists. Mosques are equivalently distributed in Lhasa and hence in the whole of Tibet. The famous Lhasa Great Mosque is located at two hundred meters of distance from the Barkhor Temple. It can be covered by walking so easily. The architecture of the mosque is very interesting. 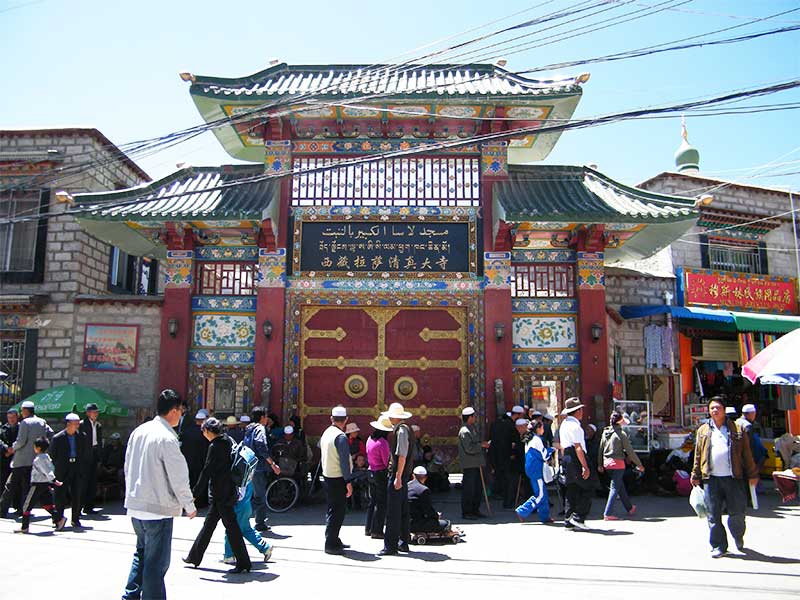 The entire mosque is blue in colour, decorated with traditional pattern resembling flowers. There is a minaret along with worship halls and schools and a dome. In the entrance, both Arabic and Chinese letters are inscribed. Thus, the mosque is also a place of interest for the tourists. In case you want to visit the mosque, follow their rules and regulations properly.

Thus the famous Canggu Nunnery not only holds a special place in the hearts of the tourists, but its surrounding places of interests, makes it even more attractive.

0 Comment ON "Canggu Nunnery, an Awesome Tea House in Lhasa"