Best Ways to Kathmandu from Lhasa – by Vehicle, Flight, Bike or Train

From the ancient Tibetan city of Lhasa, home and center of Tibetan Buddhism, to the colorful, lustrous city of Kathmandu, the center of all Nepal, it is a linear distance of 609 kilometers. However, unless you are traveling by air, the actual traveling distance between these two great cities is more like 1,300 kilometers. Traveling from Lhasa to Kathmandu is a normal trip for people visiting the high-altitude plateau of Tibet. Thousands of tourists come here every year to tour around the region, and see the amazing monasteries, lakes, and mountains that this land at the roof of the world has to offer. Travelling from Lhasa to Kathmandu

And many of those travelers go on to Nepal, to continue their tour in the high mountain, lowland hills, and tropical forests of one of the Himalayan regions most stunning countries. While there are several ways one can get from Lhasa to Kathmandu, each has its own merits and benefits, and it means that there is a route between these two places that should meet everyone’s requirements.

Lhasa to Kathmandu by Overland

Lhasa to Kathmandu overland tour is one of the most popular travel routes for tourists who want to visit both Tibet and its neighboring country Nepal. For travel overland there are also two choices for tourists; you may get to Kathmandu by vehicle provided by a travel agency such as Tibet Vista, or take a commuter bus, for Chinese nationals only. Chinese nationals can also drive from Lhasa to the border without a guide. All of the choices will give tourists chances to see panoramic views of the stunning landscapes along the route, which will surely make your trip a wonderful experience. The 1300km Friendship Highway is a scenic route connecting Lhasa with Kathmandu, the capital city of Nepal. The route has become very popular with foreign tourists in recent years. Lhasa to Kathmandu by Overland

Tibet overland tour is designed for those who prefer to soak in the sights by driving around. This tour gives you an opportunity to discover the real Tibet. From the bustling old cities to the ancient villages and settlements, you get to observe Tibetan lifestyle at close quarters. This overland tour connects two old capital cities, Lhasa in Tibet and Kathmandu in Nepal. The tour begins in Lhasa and ends in Kathmandu.

Tibet, which boasts of spectacular mountain scenery and a rich cultural heritage, is a place worth visiting. As you drive across the Tibetan plateau, you will be expertly guided around all the Tibetan monasteries, temples, monuments and important tourist sites by an expert local Tibetan guide. In Lhasa, you can explore the Potala Palace, Sera Monastery, Norbulingka, Jokhang Temple, Drepung Monastery and the busy Barkhor Square.

Leaving Lhasa, you will be driven through picturesque Tibetan settlements, where nomadic herdsmen can be seen wandering across the wide arid plateau. This overland journey takes you over several high mountain passes with spectacular mountain views, including those of the majestic Mount Everest, Cho Oyu, Makalu and Shishapangma. Your adventure tour continues to the historic cities of Shigatse and Gyantse. As you explore the ancient monasteries, forts, and citadels, you get an insight into the rich Tibetan culture and history. As you leave Gyirong and cross the border, you enter Nepal, and the Tibetan side of your tour reaches its final.

On August 30, 2017, the border crossing of Gyirong Port officially opened for international travel between Nepal and Tibet, after a closure of two years due to mudslides and landslides that occurred during the monsoon rains, which were loosened following an earthquake in the Tibet/Nepal region in April 2015. The border crossing for the Friendship Bridge at Zhangmu is still closed, however, and there is no time scale for its reopening as yet.

Lhasa to Kathmandu by Air

Taking a Lhasa-Kathmandu flight is the fastest and most comfortable transportation, and the most chosen option for travelers going from Tibet to Nepal. In fact, the Lhasa-Kathmandu flight is the only international flight connecting Tibet with other countries, and is considered to be one of the most beautiful air routes in the world, flying over several breathtaking mountains, including Mount Everest, Mount Kanchenjunga, Mount Lhotse and other peaks in the Himalayas. On the flight, you can overlook these spectacular peaks, and after the trip, stepping off a plane into Kathmandu for many travelers means an exhilarating shock – the sights, sounds, and smells can quickly lead to sensory overload. 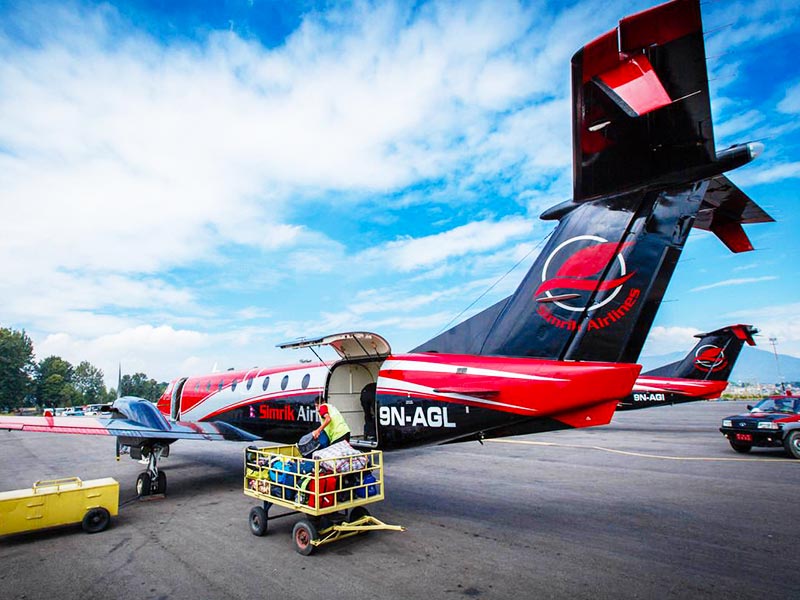 Obviously, the fastest way to get to Nepal from Lhasa is by air, from Lhasa Gonggar international Airport. There are two airlines that run flights from Lhasa to Kathmandu: Sichuan Airlines and Air China. Air China runs flights daily, both ways, while Sichuan Airlines flights run every other day, again in both directions.

Tribhuvan International Airport is situated around six kilometers from Kathmandu city center, on the Kathmandu Ring Road. As Nepal’s only international airport, the flight from Tibet would land here. The flight takes around three and a half hours, and you can be in Kathmandu by mid-afternoon. Direct flights can cost between US$280-US$300, plus airport taxes and transfers.

The other option is to take a connecting flight through Chongqing, Kunming, or Chengdu, which often adds several hours to the total travel time, but is still faster than traveling overland across the border at Gyirong Port.

Lhasa to Kathmandu by Bicycle

One great way to tour in Tibet is by bicycle. A cycling tour in Tibet is challenging, both physically and psychologically, but it is more rewarding as you get to see more of the unique scenery of this beautiful region. Every year more people choose to travel from Lhasa to Kathmandu by mountain bike. Tibetan climate is harsh, and you will need warm clothes for when it is cold, and waterproofs for rain. In summer, cycling gear is fine, as long as you have warm clothes for when you stop, or at night, as the night-time temperature can drop below freezing even in the summer. And it is important to remember to warm up before you start the day, and stretch after the day is over, to reduce the chance of muscle cramps, which can occur more in the higher altitude. 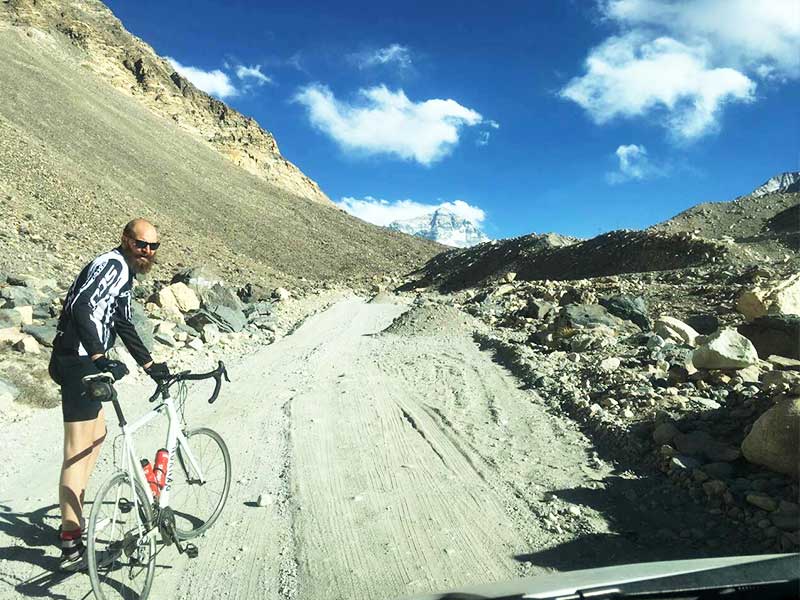 On The Way to Nepal

You can take your own bike, or you can buy or hire them in Lhasa. It is a good idea, if you are traveling in a group, to all use the same type of bike, as this will make it easier to share spare parts you may need along the route. The average cost of buying a mountain bike in Lhasa is around $75, or they can be hired for around $9 per day. If you wish to bring your own bike, it can be shipped by air or you can take it on the train.

Just like the driven tours of Tibet, a foreign tourist traveling by bicycle must have the same permits, and is required to have a guide along the whole route from Lhasa to the Nepal border. It is also a good idea to have a support vehicle when cycling in high-altitude conditions, as altitude sickness can be brought on by the extreme exertion of cycling up and down mountains in the thinner atmosphere.

The first days of riding from Lhasa are relatively easy, once you have spent a few days acclimatizing, and the harder stretches normally start after you cross the Karo La Pass, at an elevation of 5,010 meters. From here the elevations are increasing, and the highest point you get to on the tour is at the Gyatso-La Pass at 5,220 meters above sea level, which is the same altitude as the Everest Base Camp.

The easiest part of this journey between two cities is the ride after you reach Gyirong Port. From there, the route across the border and on to Kathmandu is almost completely downhill, with a constantly decreasing elevation that means you no longer have to worry about altitude sickness. However, some of the roads down from the high-altitude border crossing are rough and bumpy, and sometimes strewn with rocks, so care is needed when cycling along them.

Lhasa to Kathmandu by Train

As of this time, there is no overland railway linking Nepal with Tibet. The Lhasa to Shigatse extension of the Qinghai-Tibet Railway was opened in August 2014, and the Chinese government has plans of further extending the line into Nepal, for better travel between Nepal and Tibet. Once completed, the railway line from Lhasa to Kathmandu will cover a total distance of almost 1,000 kilometers, and will take less than one day to traverse. 1. Certain items are restricted from being brought into and out of Tibet, and the full list of restrictions is available from your tour operator, but includes flammable materials; explosives; corrosive, poisonous, or radioactive substances; weapons, firearms, or other lethal weapons such as knives and swords; and animals and goods that may affect public hygiene. There is also a list that includes manuscripts, printed matter, films, photographs, gramophone records, cinematographic films, loaded recording tapes and videotapes, etc. which are detrimental to China’s politics, economy, culture, and ethics, as well as rare historical artifacts, manuscripts, art, etc., that are not normally for sale, which are not permitted to leave China’s Tibet Autonomous Region.

2. During your overland trip, the altitude keeps increasing gradually. You are suggested to spend several days acclimatizing in Lhasa, and you can spend that time exploring the city and acclimatizing your body to the high altitude.

3. The road condition in Tibet is relatively good, but you need to drive along with winding and steep roads for better scenery sometimes. The road linking Gyirong Port and Kathmandu is narrow, and the driving speed is rather low for safety.

4. A Nepal Visa is required for all foreign nationals (except for Indian nationals) who enter Nepal. A visa upon arrival for Nepal is possible for USA, UK, Australia and Canada passport holders, and is only available for those who are flying into Nepal through Tribhuvan International Airport.

5. All Tibet tours must be booked at least 20 days in advance. It normally takes 2–3 days to confirm hotel bookings, and about a further 10 days for the Tibet Tourism Bureau to issue the Tibet Entry Permit. No individual travelers are allowed to travel to Tibet, and your whole tour in Tibet must be accompanied by a licensed tour guide.

6. Credit cards are not recommended as a way of payment in Tibet because only the Bank of China, up-market hotels and large shopping departments in Lhasa and Shigatse accept them. During your travel in Tibet, you should prepare enough cash, in local currency, for all your purchases during the trip outside Lhasa.

Ultimate Guide to Cycling from Lhasa to Holy Lake Namtso

0 Comment ON "Best Ways to Kathmandu from Lhasa – by Vehicle, Flight, Bike or Train"