In Tibetan, Mt. Kailash is known as Ghang Rinpoche, which translates to “Precious Mountain”, and it is just that. Holy Mt. Kailash is the most sacred mountain in the world, and it is not just sacred to Tibetan Buddhists. As a holy mountain to four different religions – Buddhism, Hinduism, Jainism, and Bonpo – the mountain is considered to be the most sacred place in the world. A precious and prominent peak, Mountain Kailash is a symmetrical, pyramid-like mountain made of black rock and is surrounded by a beautiful, yet dry and rugged landscape. 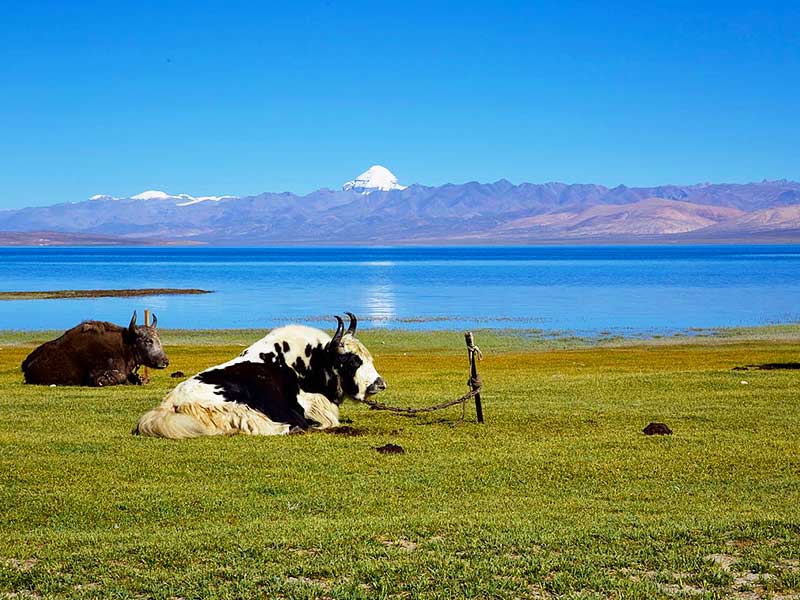 The highest body of freshwater – Manasarovar

Lake Manasarovar is also revered in Tibetan Buddhism, and is one of the most holy of lakes. The highest body of freshwater in the world, Manasarovar holds religious significance in Hinduism, Buddhism, and Jainism.

Traveling to these two beautiful sites is not possible all year round. Kailash and Manasarovar are in the northwest region of Tibet, in Ngari Prefecture, and winter in the northwest can be very cold, with plenty of snow on the ground, making travel in the region almost impossible. Knowing when to visit is important, as these two sacred sites are more beautiful at certain times of the year.

Obviously, the best time to visit Kailash and Manasarovar would be during the Saga Dawa Festival. This is one of the most important festivals in Tibetan Buddhism, and celebrates the birth, enlightenment, and death of the great Buddha Sakyamuni. However, the number of Indian tourists in the region at the time of the festival is huge, and they book up all the hotels and guest houses months in advance, so the chances are you would not be able to get in.

Outside then, the best time to visit Mt. Kailash and Lake Manasarovar is in the shoulder seasons in Tibet. The Tibetan tourist season runs from April to October, and the peak time for tourism is in July and August, the summer months. While it is not the ideal time, the rains are not that hard in the northwest of Tibet, and it is possible to tour Kailash. 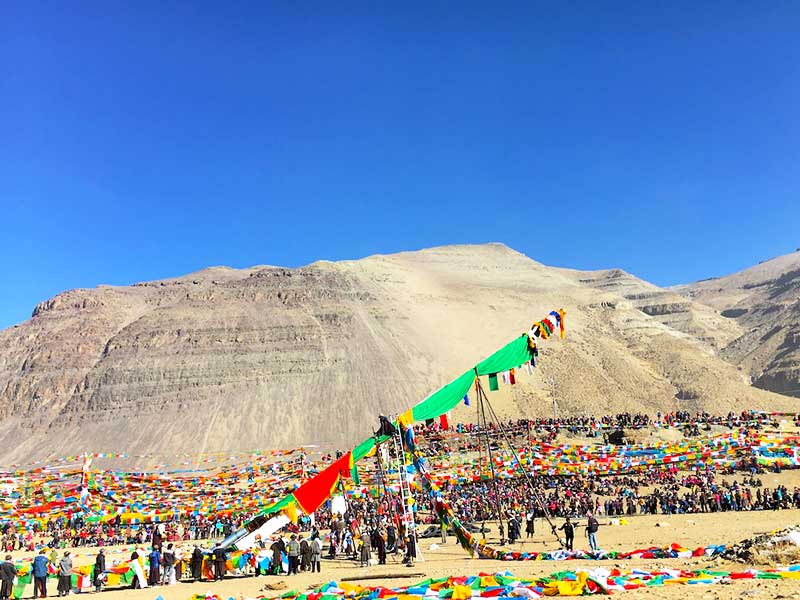 The “shoulder” seasons in Tibet are normally spring and autumn, from April to the end of June and from September to the end of October, or early November if the snow is not yet come. The skies at these times are clear, and the sun is strong, making the region a little warmer than it normally is. The highest part of the Tibetan plateau, the northwest region is still cold all year round, so bring some warm clothes.

Winter is an impossible time to try and visit any part of Ngari Prefecture. The snow is deep and blocks roads and mountain passes with heavy drifts, making travel in the region unfeasible. Even when trekking, it is dangerous to do so in the depths of winter, as the snow shifts with the winds, and heavy snowstorms and blizzards can come on suddenly, leaving trekkers stranded and lost.

The summer months in Tibet are also the rainy season, and while it is not impossible to visit Kailash and Manasarovar in the summer, it is not the ideal time to go, especially if you are intending to walk the kora route around the mountain. November to March is not an good time to visit the mountain either, since you may be camping out during the trek, and it is too cold in the winter months. The mountain and the passes are also covered by heavy snow in the winter, making it dangerous to trek the kora route. The best time to trek around Mt. Kailash would be either from late April to early June, or from September to the end of October. The weather at these times is the best for trekking around the mountain, as the skies are clear during the day and it is not too cold at night. What is more, is the views of the mountain. With the clear skies and warmer climate, the mountain seems to shine with its own light, as if the gods really do live there, and the views from the famous Dolma La Pass are at their most spectacular.

One of the most popular attractions of Mt. Kailash is the 52 kilometer long kora route that runs around the mountain. This route is popular with Tibetans and tourists alike, and many thousands of people travel to the Ngari region in the far west of Tibet for the experience.

The kora around Mt. Kailash is one of the hardest routes to trek in Tibet, and takes around three days to complete, if you are trekking at a normal pace. However, there are those in Tibet who will make this long circumambulation in just one day, to gain more merit on their journey towards enlightenment. While many pilgrims make just one circuit of the mountain, many others will make three, thirteen, or even an incredible 108 circuits. It is believed that to walk around the mountain once will cleanse all the sins of a lifetime, walking it 13 times will bring you to enlightenment within your lifetime, and walking it 108 times will take you to instant enlightenment. Mt. Kailash actually has two kora routes, an inner and an outer kora. The outer kora is the route normally used by tourists and pilgrims, as it circles the whole mountain in one big loop, starting and ending at the village of Darchen. While the outer kora is already a hard and arduous route to take, the inner kora is even harder. The route leads one straight to the south face of Mt. Kailash, in a small loop around the minor peak of Nandi, under the south face of the mountain.

The outer kora route starts in Darchen, a small village just south of Mt. Kailash. From here, pilgrims head west to the opening of the valley before turning north towards the first monastery of the trip, Chogu Gompa. The route continues past the gompa and heads up the valley to Drirapuk Monastery, where you stop for the night. On the second day, you will make the hardest ascent of the entire kora, climbing up to the 5,636 meter-high Dolma La Pass. Festooned with prayer flags from hundreds of thousands of visitors and pilgrims, the view from the top of the pass is breathtaking, and is one that you will remember for a lifetime. From there it is downhill all the way to the second stop, at Dzultripuk Monastery. After a restful night at the monastery camping ground, it is on for the last leg of the journey, as you head south towards the end of the valley, and then turn west once more for Darchen.

Another sacred place in Ngari Prefecture, and another kora route undertaken by many pilgrims right after Mt. Kailash, is Lake Manasarovar. One of the three holy lakes in Tibet, along with Namtso Lake and Yamdrok Lake, Manasarovar is the highest freshwater lake in the world. Located at the southern foot of Mt. Kailash, it has an elevation of 4,590 meters and is a divine place for the four religions. For religious believers, drinking the water or bathing in the lake is believed to cleanse all the sins of a lifetime.

According to Hindu legends, the lake was created by Brahma, the god of creation, for his sons to bathe in after trekking to the holy land. In Buddhist legends, the mother of Buddha was transported there by the gods, to bathe in the lake until her body was purified. While bathing, she saw a white elephant running towards her from the holy mountain, and then she gave birth to Buddha. 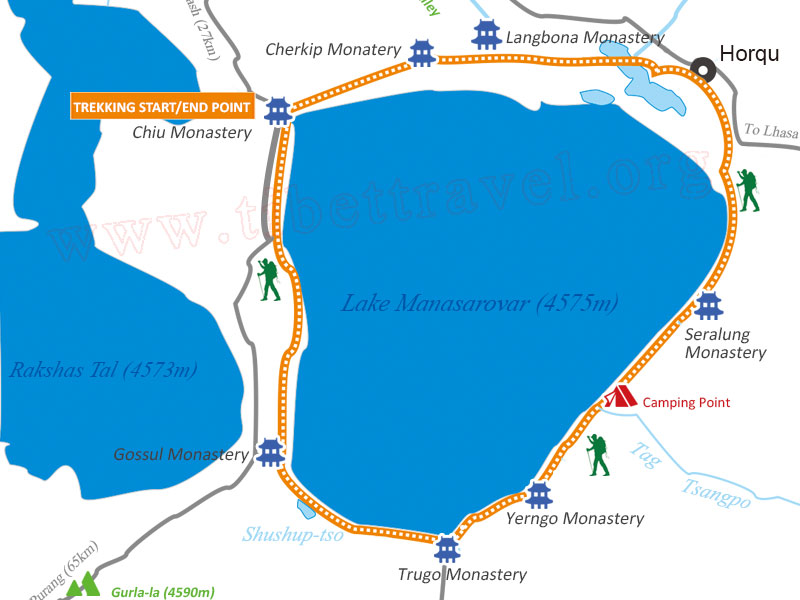 The kora around the lake is a four-day walk, and the lake reflects the blue skies and white clouds perfectly, as if looking in a mirror. It is a 110 kilometer trek around the shores of the lake, and you will pass by five Buddhist monasteries on the route; Chiu Monastery, Langbona Monastery, Seralung Monastery, Trupo Monastery, and Gossul Monastery. There are guesthouses in some of the monasteries, but majority of pilgrims camp out in the open, and it gives you a much better understanding of the kora to do so. Although it is good to stay at least one night in a monastery, as it is not that often one can spend a night in a real Tibetan Buddhist monastery, and it is an experience not to be missed.

Tibetan pilgrims always start at the Chiu monastery in the northwest corner of the lake as it is widely regarded as the best place to start the kora. As with all Buddhist and Hindu koras, the walk is done in a clockwise direction, while the Bonpo believers walk a counter clockwise route. If you have just done the Kailash kora, and continue straight to do the Manasarovar kora, you will feel a great sense of achievement, having completed two of the most famous and revered treks in Tibetan Buddhism.

How to Get to Lhasa from Kathmandu? What Is the Best Way?