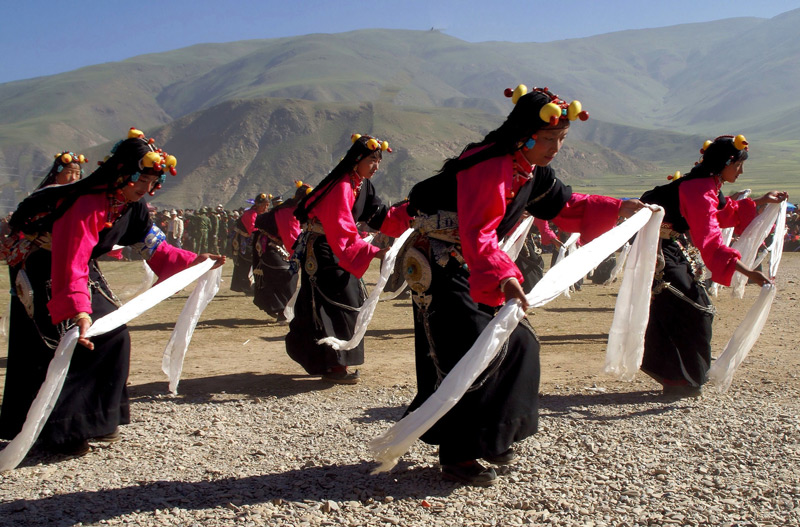 Make a Tibet Travel in your list. This Festival is good for your consideration.

Today is “Fairy Festival” in Tibet, which falls on the 15th day of October in Tibetan lunar year and the 25th day of November in Chinese calendar. This day is Tibetan women’s holiday. They regard it as their own holiday, and they are more happy and look forward to it than men. There is various kinds of religious activities held, such as singing, dancing, praying, etc. During the festival, many Tibetan women gather around the Jokhang Monastery to pray for a happy marriage and their true love. Come and experience this magical Festival in 2016 with Tibet Travel Agency.

In Jokhang Monastery, the statues of Sontzen Gampo and Bailamu will be moved from the hall of Jokhang Temple to the yard of Jokhang for Tibetan’s pilgrimage. Tibetan women will get up early in the morning. They will dress in their beautiful traditional clothes and gather at the yard to pray. There is a saying that Tibetan will grow more and more beautiful via pilgrimage to these two Buddhas. Later, they will go to the Barkhor Street to burn aromatic plant. After the entire festival, families will sit around the hillside and prepared food in the ground, and they eat, drink, sing and dance.

Two famous legends about “Fairy Festival”:
1) Once upon a time, a family have a beautiful daughter called Bailamu. They love their daughter very much. One day, they found she loved the Sontzen Gampo and pledged to marry without the permission of parents. After this affair was found, the parents were angry and did not let them to love each other. Therefore, they tried to prevent, but lose. Finally, they cursed that she would not have a husband, or even if she did, they could only meet each other on one day in a year. This day is the 15th day of October in Tibetan lunar year. Sontzen Gampo was exiled to the south side of Lhasa River. So, they could only see each other across the river. Year after year, Sontzen Gampo and Bailamu bear the torture and torment of their separation. Their story was sympathized by the local Tibetan, so the locals set this day as “Fairy Festival”.

2) A few hundred years ago, a beautiful girl called A Rong. She invented the sawali and overhead cable to fly cross Nujiang River, and still led sweet spring water for people from Gaoligong Mountain, and later in order to escape forced marriage, she hid in a cave and turned into a stone statue. To commemorate the bright and strong girl, people make sacrifice to her in the annual day.

The Beautiful Photos on the Way from Kashgar to Ali, taken on Oct.31