Sending a postcard from where you have traveled to is very meaningful and romantic in modern times. Everyone loves to send postcards from the places they visit. This has been a tradition for explorers and travelers since postal services first began. Postcards are the old-style of proof that you actually went somewhere else in the world, and serve as souvenirs to yourself, your friends and family back home. Since the picture postcard was invented in the early 1800s, postcards have been sent out from amazing places in the world. When traveling to Mount Everest, and you can also send postcards from the EBC post office, the highest post office on the planet.

Where is the Tibet Paradise Post Office at EBC?

The post office is located right in the middle of the Everest Base Camp (EBC), at an altitude of around 5,200 meters above sea level. The post office at the site has been upgraded as below in 2018 and has a lot more to sell for tourists looking for the best in souvenirs. You can send postcards from this beautiful ECB post office from July 2018.

The post office is decorated in traditional Tibetan styles, both inside and out. Cabinets and displays showcase the items you can buy there, from postcards and stamps to souvenir medal. The post office also includes seats and tables for you to write and address your letters and postcards before you send them. It even has the classic “pen on a string” stuck to the tables for you to write your postcards with.

When can I send postcards at the EBC post office and how long will it take to receive them?

The post office at EBC is actually only open for a certain time of a day during a certain period of the year. The daily opening hours are generally from 10:00am to 6:00pm seven days a week. The post office does not close for Chinese national holidays normally, and you can still send your postcards, though they will not actually go anywhere until after the holidays. 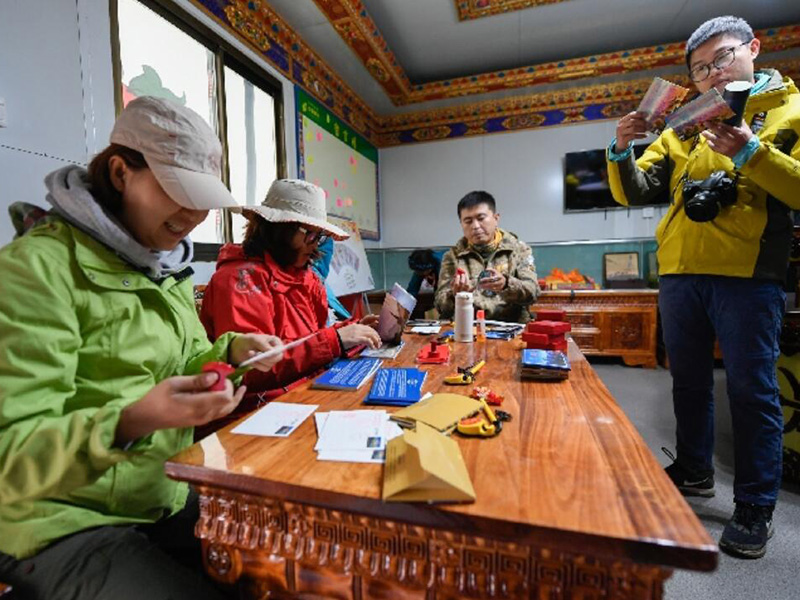 However, you cannot send your postcards all year round. Due to the inclement weather conditions in the winter months around Mt. Everest, the post office closes up for the low season. The post office opens for the tourist season on April 15th each year, and runs daily until the closure for the winter on October 15th. 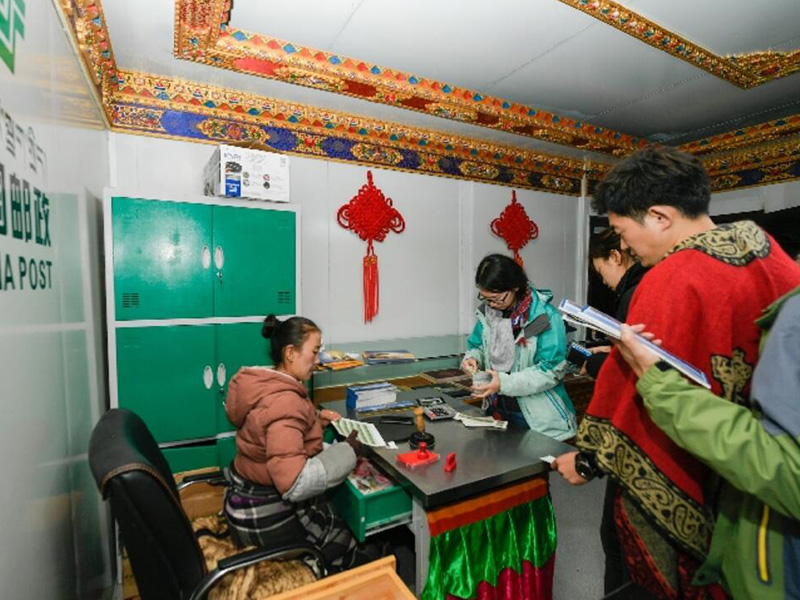 You can buy postcards and stamps in cash at the EBC post office.

One of the common questions about sending a post from the EBC Post Office is “How long will it take to get to my home?” This is a matter of some consternation, actually, and the normal postal delivery time only applies here once the postcard gets off the plateau and down to mainland China. Postcards sent from the ECB post office are collected to Tingri post office twice a week, and then sent out from Tingri.

Delivery time to overseas destinations varies depending on the destination. According to the statistics from China Post, postage to Canada and the United States takes around 15 days, and to the UK and Europe, between 10 and 12 days. Considering the traffic conditions in Tibetan Plateau, it takes a longer time to receive postcards sent from EBC.

How to send a postcard at the ECB post office?

Sending the postcard from the EBC Post Office is easy, and you can do it during your Mount Everest tour. Postcards and stamps are available for sale at the post office. Postcards are normally around 5-6 yuan each, or you can buy a set for around 50 yuan. Alternatively, you can bring your own postcards, prepared in advance, and send them from the EBC posts office. 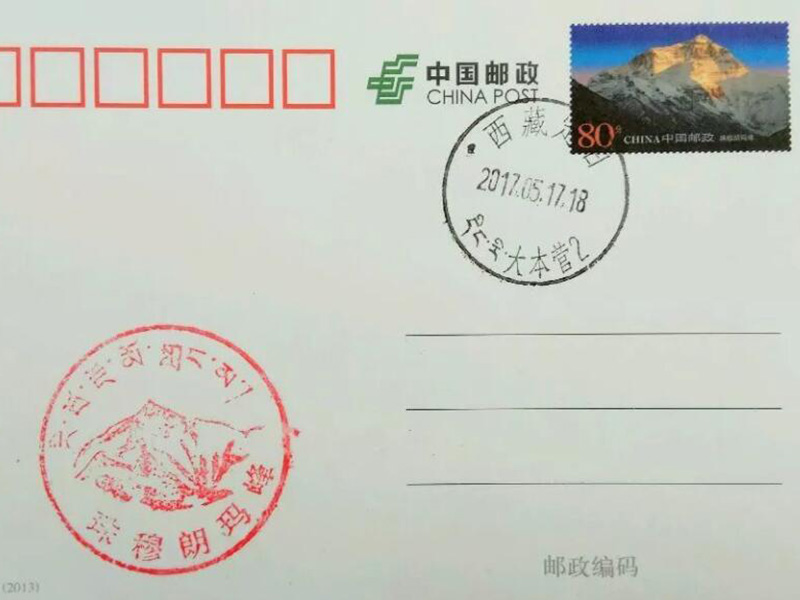 The red stamp means “Everest” in Chinese and Tibetan language, while the black one is the official stamp of the EBC post office with a date.

Once you have written your postcard, and pasted the postage stamp, you can take it to the staff at the counter to have it stamped and sent. The staff will put two ink stamps on the postcard, the red one is Everest in Chinese and Tibetan language, while the black one is the official mark of the EBC Tibet Post Office. You can also have the postcard stamped with Tibetan blessings before posting, to send goodwill around the world in typical Buddhist traditions. 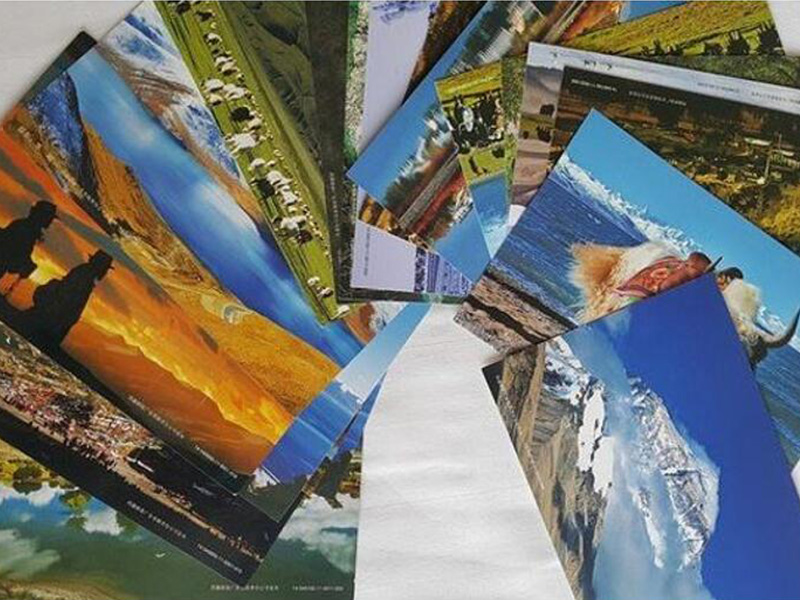 You can have your postcards stamped at the EBC post office.

If you are worried about failing to receive the post cards, you can send more than one card to the same recipient. Another option is to have your postcard stamped for free, and then take it with you instead of posting it.
Postage for your postcard does depend on where you send it to, it is a little higher than that in ordinary post office considering the distance these postcards will travel. For a postcard to Beijing, the cost is around 3 yuan. International postage costs 10 yuan to Europe and 12 yuan to North America, and payment is made in cash to the post office staff.

On April 18, 2008, a temporary post office was set up at Everest Base Camp for the arrival of the Olympic Flame on its way to the 2008 Beijing Olympics. The post office is a small green tent and lasted like this for almost ten years. 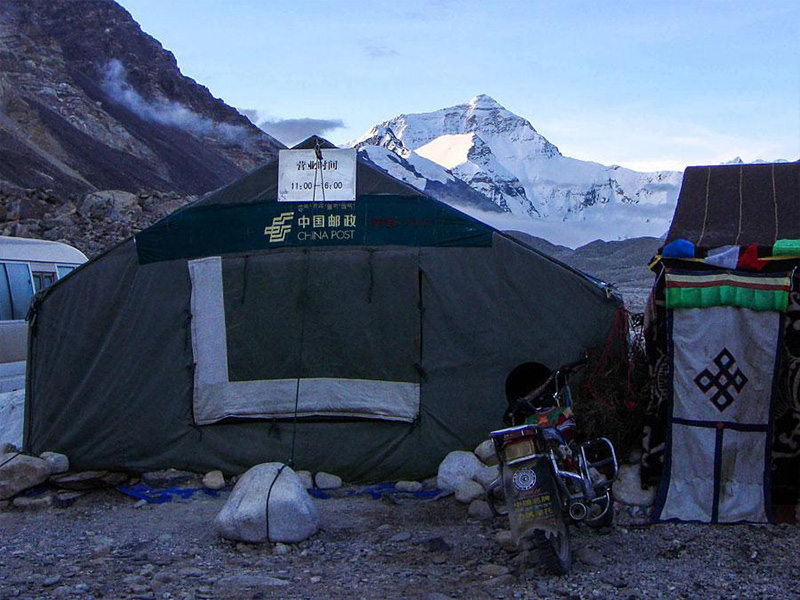 In 2017, it was upgraded to Tibet Paradise Post Office, complete with better facilities, as well as warmer and more comfortable amenities. Completed in a traditional Tibetan theme, the post office was inaugurated on 6 June 2017. In July 2018, the Tibet Paradise Post Office at EBC was open after the upgrade and reconstruction. Many Tibetan-style decorations were added. In addition to the traditional postcards, stamp collections, and postmarks service, it also adds express delivery service.

Having a post office at Mount Everest is the most unusual thing in the world, but it is a great way to send mail to your loved ones back home. It costs a little bit higher than usual and takes more time. But since it is the souvenir that is important, and no longer a means of letting people know where you are (that’s what social media is for these days), it is nice to get a postcard from yourself after you get home. And it is a nice little reminder of the wonderful time you had in Tibet, the amazing and awesome sight of the world’s highest mountain, and the highest post office in the world.

During the 3-Day Mount Kailash Trekking: What to Drink, Eat and Where to Stay?