One Day Private Tour to Potala Palace and Barkhor Street

Here are three streets, including Lingkhor, Barkhor and Nangkhor, in Lhasa for pilgrims to make ritual walks. They are respectively the outer, the middle and the inner sacred paths around Jokhang Temple, the most sacred temple in Lhasa.

Itinerary   Start from the hotel, drive to Potala palace and then Jorkhang monastery.

meet at the hotel, drive to Potala Palace in the morning, take a 3hrs visit and then to the Jorkhang moastery in the afternoon.

After the tour, we will drop you off at your hotel.

Potala Palace is the landmark of Lhasa and Tibet, Its history dates back to 630s, the time Songtsan Gambo, the King of Tibet, moved the capital to Lhasa. The Palace buildings stand 13 stories high and contain over 1,000 rooms, 10,000 shrines and 200,000 statues. It is the world’s largest and most intact ancient castle-style complex located on the highest altitude. The 5th Dalai Lama and his government moved into Potala's in 1649, construction lasted until 1694, some twelve years after his death. The Potala was used as a winter palace and the chief residence of the Dalai Lama from that time on.

Jorkhang monastery, located at the right heart of Lhasa, Jorkhang was built in 7th by King Songtsan Gampo. At first it’s called “Resa”, and later, “Resa” became the name of the city, and granularly became “Lhasa”, which we called today. Jorkhang has a history of 1300yers, and has a greatest reputation in Tibetan Buddhism. All Tibetan pilgrims form all over the world regard Jorkhang as the holy land in their mind.

Lingkhor is the most common name of the outer sacred path in Lhasa, matching its inner twin, Barkhor. In its heyday, it was about 8 kilometers long, enclosing Old Lhasa, Potala Palace and Chokpori Hill. It passed through willow-shaded parks where Tibetans used to picnic in summer and watch open air operas on festival days. In former times, it was crowded with men and women circumambulating clock-wise, sometimes by means of full-body prostrations. Unfortunately, most of Lingkhor has been wiped off by New Lhasa. Only one stretch still remains west of Chakpori. It stretches left before a bridge between walls and willow trees. The bridge is about 1 km west of Potala. 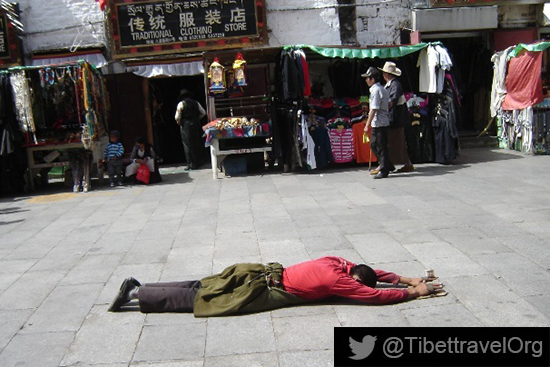 the pilgrim in Barkhor

In the middle sacred path Barkhor, generally the old and middle-aged pilgrims often walk around the old parts of the city in early morning till afternoon. In Tibetan “Bar” means middle and “Khor” means a street. This street popular among locals and tourists, is fully decorated with local customs. You can see Tibetan traditional constructions, and tourist souvenirs shops along the street. In early times, Barkhor was not only a place for practicing Dharma, but also a market center for Tibetans.

Nowadays, you can see thousands of pilgrims making circumambulations around Jokhang, while unceasingly murmuring prayer and turning prayer wheels in their hands for purifying their sins. The street is still densely surrounded by shops of handicraft articles, such as prayer wheels, daggers, rings and bangles. In addition, there is a very special restaurant, called Makye Ame, in the east of Bharkor. It was a romantic place where 6th Dalai Lama wrote love poems for his girlfriend.

Nangkhor is the innermost circumambulation path around Jokhang Temple. It is not as famous as Barkhor, but you can enjoy many kinds of delicacies on this street, like fried potatoes and Tibetan noodles. 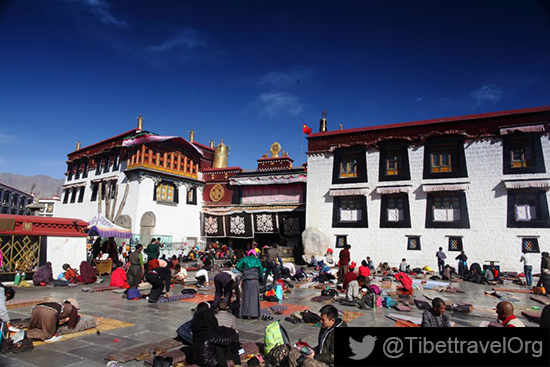 Tibetan People are in front of Johkang Temple, and it is common in their daily religious life