Nyingchi Mainling Airport is the third airport put into operation in Tibet, with a designed annual passenger flow of 120,000, located in Mainling, Nyingchi, Tibet Autonomous Region, China, which is just 52km away from Nyingchi city. It is suggested to be one of the most challenging instrument approaches in the world, because the airport is in a winding valley of the Yarlung Tsangpo River. In addition, surrounded by over 4000m high mountains enveloped by clouds and fogs throughout the year, it is known as 'the world's most difficult airport for planes to reach'. The narrowest flight path is less than 4 km from one mountain ridge along the valley to the opposite one. However, so many tourists choose to fly to Nyinchi for it is the lowest airport in Tibet, at an elevation of 2,949 meters above sea level.

Although Nyingchi Mainling Airport is known as one of the world's most difficult airports for aircraft to reach, there is still a swarm of tourists who are willing to get to Nyingchi by air, due to its lowest altitude in Tibet. To some extent, there are a lot of travelers entering Tibet to start Tibet tour through Nyingchi as the low altitude of Nyingchi can help them against the AMS. Besides, there are still many places that are worth to pay a visit.

With the development of tourism in Tibet, Nyingchi Mainling Airport can contain more passengers from different places like Chengdu, Beijing, Guangzhou, and so on. These flights are operated by Air China, China Southern Airlines, Sichuan Airlines and Tibet Airlines. Chengdu to Nyingchi is a busy airline, so if you want to travel to Nyingchi from Chengdu, you'd better book air tickets as early as possible. Here, in order to offer you convenience, we list the detailed flight schedule for reference.

How to get to Nyingchi Airport

Nyingchi is about 50km away from the airport, around one-hour drive via Mainlin Airport Expressway, there are three modes of transportation for you to choose from Nyingchi to Mainling Airport. The first is Airport Express, the cheapest but inconvenient one. You can take this shuttle bus at Civil Airport Base at 7:20 or 7:40, only two buses each day, the ticket takes about 25 CNY for one person. If you miss the shuttle bus, taxi is another option, expensive but convenient, the price also can be negotiable with the driver. The third one is the most reliable - contact us, wherever you want to visit as long as the laws permit, we will help manage considerately. On the contrary, these three ways are usually used, but the shuttle bus from Airport to Nyingchi will set out when being full. 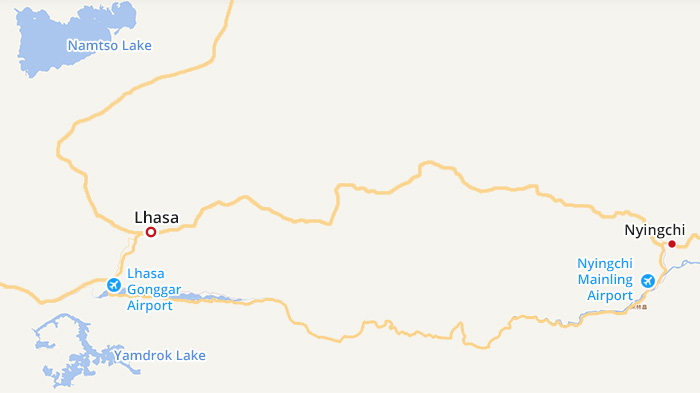 The location of Nyingchi Mainling Airport on the map

Nyingchi Airport is the closest one to Lhasa expcet the Lhasa Airport. Therefore, there is a swarm of tourists choosing to arrive here at first during peak seasons every year. If you are planning to visit Lhasa from Nyingchi, taking shuttle bus is also available, you will spend about 5 - 6 hours on the bus. Also, the bus will not stop along the road, which means you will lose a chance to visit the tourist attractions on the way. Fortunately, joining in our tour can avoid this problem, we will lead you to visit some famous sites, such as Draksum-tso Lake, Mila Pass and so on.

Many places in Nyingchi are reputed as Tibet’s Switzerland, there are the world’s deepest canyon - Yarlung Tsangpo Grand Canyon, the holy Mount Namcha Barwa, the breathtaking Midui Glacier, and the picturesque Draksum-tso. You will have a visual feast in Nyinchi.

Lulang Forest is a typical plateau-mountain-meadow, regarded as a fairyland with the special breathtaking landscape in every season. There is a village named Lulang, recommended by Lonely Planet, It's basically a large village with lots of swamps and yaks against a very Swiss Alps mountains, which will remind you of Switzerland. The scenery is beautiful and there are lots of lookouts along the way where you can take photos. It is a golden opportunity to breathe fresh air, refresh your spirit.

Draksum-tso is one of Tibet’s most famous scenic spots, about 90 km away from the county seat Gorlingka and 120 km away from Bayi Town. Draksum-tso, surrounded by 6000m snow-covered peaks, will offer you snow mountains, alpine lakes, natural falls, historic sites, ancient monasteries, and lots of animals, which is also a dreamed land for photographers. The turquoise lake will reflect the surrounding mountains, forests, and blue sky, as if you are traveling in the picturesque fairyland. 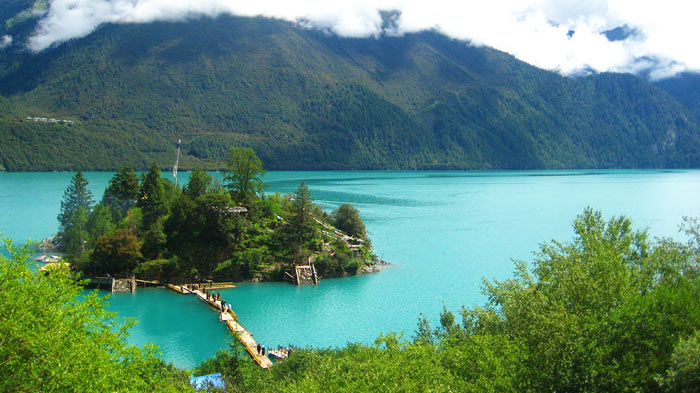 Midui Glacier, reputed as one of the six most beautiful glaciers in China by China National Geography, is located in Midui Village, Yupu Town, Nyingchi. It is also the lowest glacier in the world. There is very breathtaking landscape and you can do a short hike to very close the glacier. A well-constructed and maintained walking trail leads to a big observation platform from where the ice mountain’s glaciers which fall into a glacier lake can be viewed. The trail leads to areas of lush vegetation. If you are fond of photography, the landscape will surprise you.

Namcha Barwa(7782m) is the highest mountain in Nyingchi, standing inside the Great Bend of the Yarlung Tsangpo River. In Tibetan language, it literally means “burning thunders”. Mount Namcha Barwa is reputed as the holy land by Bonismo, a Tibetan Buddhism. Although you can’t trek or climb in Namcha Barwa, it is still lucky for you to view the mountain in the distance at Mila Pass via G318 or Segyi La Pass. Surely, if we help manage a tour when you go to Lhasa from Nyingchi Airport, we will stop for rest at Mila Pass, thus you can take some wonderful pictures.