Lying in the Lhoka Prefecture of Tibet, to the south of the Tibetan capital of Lhasa, Samye Monastery is one of the most stunning buildings in Tibet, and has been around for more than 1,200 years. For cultural explorers, Samye Monastery tour would be a delightful day trip from Lhasa to learn more of the ancient history of both Tibet and Tibetan Buddhism. Please follow our travel guide below and get ready to make most of your tour in Samye Monastery.

As with all tours of Tibet, the first thing you need is your valid passport and the Chinese Entry Visa, which can be obtained from any Embassy of the Peoples Republic of China. Processing takes around three days, and it is required before you can book the tour and get the rest of the permits for Tibet.

The second thing you need, and the most important for visiting Tibet, is the Tibet Travel Permit. This can only be obtained once you have booked a tour to Tibet, and it can only be applied for by your tour operator. Once your tour is booked, we will make the application on your behalf with the Tibet Tourism Bureau in Lhasa, using scanned copies of your passport and Chinese Entry Visa. Processing the permit usually takes up to 8-9 days, depending on the time of the application. Once completed, we will forward the permit to your hotel in China for you to be able to board the train or flight to Tibet.

You will also need the Alien’s Travel Permit, which is required for visiting the “unopened” areas of Tibet, of which Lhoka Prefecture is one. The Alien’s Travel Permit is issued by the Public Security Bureau (PSB) in Lhasa, and is often known as the PSB Permit. This can only be arranged by the tour operator, and is applied for by your guide once you reach the Tibetan capital. Processing takes around an hour, and requires your guide to have your original passport and Tibet Travel Permit. Once you have both of these permits, you can head out to visit Samye Monastery.

How to Visit the Samye Monastery

Samye Monastery is one of the most stunning examples of early Tibetan Buddhist architecture in Tibet, and once consisted of 108 buildings, an auspicious number in Tibetan Buddhism. Constructed as a means to start the revival of Buddhism in Tibet, which had declined after the death of the 33rd king of Tibet, Songtsen Gampo, the monastery has been a major influencing factor in the growth of Buddhism in Tibet, and is so famous that the Puning Temple in Hebei was modeled after it by the Qianlong Emperor of Qing Dynasty China.

The monastery is laid out in the form of a Mandala, with the central building, the Utse or Wuzi  Hall, representing the legendary Mount Meru of Buddhist and Jain mythology. The square in front of the main hall includes the protector chapel one of four chapels that surround the central hall and represent the four continents that lie in the ocean around Mount Meru. 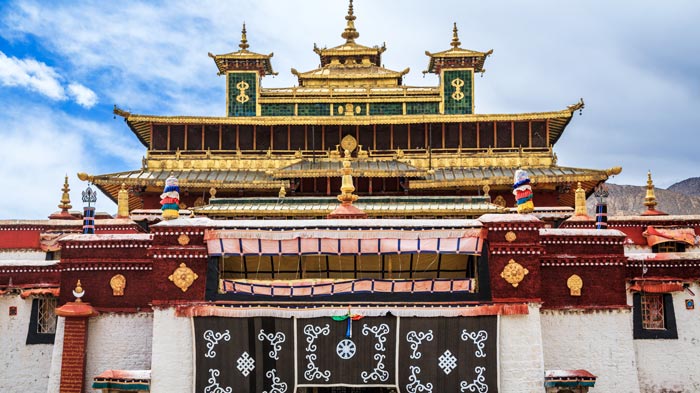 The Utse Hall was originally built over four floors, though the top floor during the course of turbulent years. The other three floors remain, however, and the stunning golden roof was restored in 1989. The inside of the main assembly hall contains the statues of many of the ancient Tibetan kings, as well as images of Padmasambhava and the Indian Buddhist master, Atiśa. Inside the inner sanctum of the hall is one of the most stunning images of Sakyamuni Buddha in the world. Known as the Jowo Khang, this inner sanctum is accessed through three tall doorways off the main hall.

To the left of the main assembly hall lies the Chenrezig Chapel, which is the home of the beautiful statue of Chenrezig, also known as Avalokiteśvara, the “one who looks with unwavering eye”. The most revered of all the Bodhisattva, he is visualized at Samye as having eleven heads and a thousand arms, with eyes in each hand to look for and help those in need.

It is possible to access the upper levels of the hall, and on the second floor, there is an open gallery with a huge string of murals covering the walls, which depict the history of Tibet from its early beginnings. The hall also includes a damaged mural of the legendary Shambhala, often called “Shangri-La”, the mythical kingdom that is said to be laid out in the form of a lotus blossom surrounded by snow mountains.

In the four corners of the monastery complex, there lie four sacred chortens, in four colors, red, green, white, and black, and each chorten is slightly different. The chortens, which are round hemispherical structures with tall spires that contain precious Buddhist relics, have their own chapels, and are often used as a place of meditation and contemplation. The chortens at Samye were specifically built to protect the central hall from devils.

Visit the Other Sacred Sites inside Samye Monastery

The monastery is a sacred site with many wonders inside its walls, including the outer wall, which is topped by 108 small stupas. The original royal chapels of the monastery, known as “ling”, surround the main hall, and in a clockwise direction, which should be walked when touring around the monastery, each of the chapels can be visited. The jampel Ling, the protector chapel, has the best view of the main Utse hall from its top floor balcony, while the ruined seven-floor Geku Ling that is used to display the thangka paintings during festivals has been restored to its former glory.

Tsengmang Ling was once the monastery’s printing room, for all sacred texts and scrolls, and just beyond that is the smaller Mela Ling. The Ngamba Ling is the Subdued Demon Temple, and is adorned around its interior with dozens of modern murals and two three-dimensional mandalas. Further around, past the college building of Shetekhang, is the Aryapalo Ling, believed to be the first building completed at Samye, and the Drayur Gyagar Ling, which was the original center for translating the Indian Buddhist texts into Tibetan.

The great debate of Samye was held in the next chapel, known as the Nugko Jampa Ling, and around the corner lies the Jangchub Semgye Ling, with its green walls and Chinese-styled roof. The Kordo Pehar Ling lies to the east of there, and was the traditional home of the Tibetan oracle, Pehar, until he moved to the Nechung Monastery outside Lhasa.

Climb to Hepo Ri to Enjoy the Panorama of Samye Monastery

Lying around 400 meters to the east of the monastery, the mountain of Hepo Ri is the site where Padmasambhava defeated the demons that plagued the construction of Samye Monastery in the 8th century. A short 30-minute climb from the monastery up the western ridge of the small mountain brings you to the summit, and a huge incense burner festooned with colorful prayer flags that blow in the wind, casting their blessings across the world. Hepo Ri is revered by pilgrims as one of the four sacred hills of Tibet. 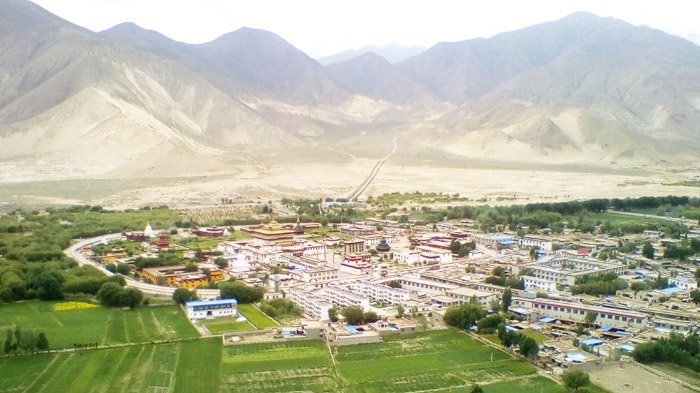 A panoramic view of Samye Monastery from Hepo Ri Mountain.

How to Travel from Lhasa to Samye Monastery 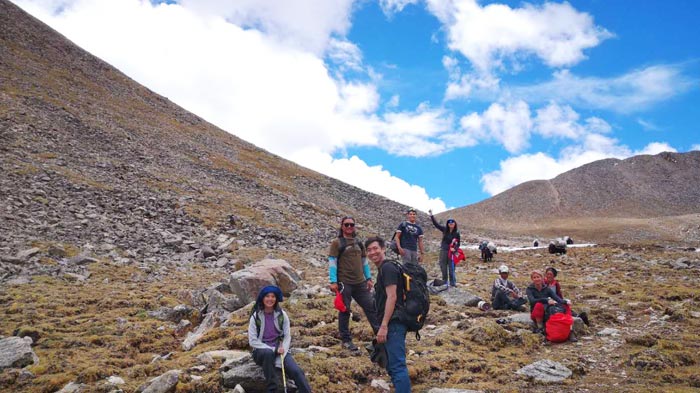 The wonderful trekking from Ganden Monastery to Samye Monastery.

If you are feeling particularly adventurous and enthusiastic, you can hike the distance from Ganden Monastery in Lhasa to the Samye Monastery, a trek which takes around 4-5 days, depending on your level of fitness. The trek takes you through some of the Yarlung Zangbo Valley’s most beautiful landscapes and scenery, as well as resting high passes that exceed 5,000 meters above sea level. For our clients in the guided tour, the convenient transfer service will take you from Lhasa to Samye directly.

Other Alternatives around Samye Monastery

Samye Monastery is not the only attraction in the area, and there are plenty of other things to do and see around the town of Tsedang that are well worth checking out.

A collection of cave shrines to the northeast of Samye Monastery, the Chim-puk Hermitage grew up over the centuries following the use of the area as a meditation retreat by the Buddhist sage, Padmasambhava. The tantric practitioners of Chim-puk were once renowned for their ability to protect the fields and crops of the local farmers from the intense hailstorms that plagued the region. Many of the caves are still used as hermitage caves by Tibetan Buddhist lamas.

Up the valley behind the monastery is the Yamalung Hermitage, easily visible on the high cliff face above the valley floor. Lying around 20 kilometers from Samye, along an old dirt track, the hermitage can be accessed by a 45-minute climb up the steep slope. The hermitage is said to be one of the places where Guru Rinpoche stayed to meditate, and where he received his empowerment from the deity of long life, Tsepame.

Samye Monastery is one of the most stunning monasteries in Tibet, and is well worth the additional day to take the trip down to Lhokha Prefecture to get a good close-up look around the oldest monastery in Tibet. Lying in what is believed to be the cradle of Tibetan civilization, this unique temple site has more history than anywhere else in Tibet, and is one of the most important sites in modern Tibetan Buddhism.