Tibet lies on the high-altitude Qinghai Tibet Plateau, the world’s highest plateau with an average altitude of around 4,800 meters. An unusual and unique landscape made up of vast plains, huge sacred lakes, lush green valleys, and some of the highest mountains on this green planet, Tibet is unlike any place you have ever been trekking.

Spring and autumn offer the best trekking conditions for high-altitude trekking, though treks are available year-round. A devoutly Buddhist region, Tibet is a stunning place to visit, with monasteries perched high on mountainsides and multitudes of colorful prayer flags at every pass and turn. There really is nowhere like Tibet for your best trekking experience.

Spring and Autumn are the Best Seasons for Tibet Trekking

The best time to trek in Tibet is in spring and autumn, which are from April to May and September to October. During these times there is little rain to interrupt your trekking tour in Tibet and it is not too hot to walk in the wilderness of Tibet. If you come to Tibet in the wrong season, then you will not be able to complete your trekking route due to adverse weather conditions. So, weather conditions on the plateau are very important for trekkers.

Spring in Tibet is a great time for trekking, when the ice melts and the temperatures start to warm up a little. Previously blocked roads are open once more, which makes travel around the more remote areas of the region much more pleasant. Early spring flowers begin to bloom in mid-April, and the plateau has a pleasant look of new growth. 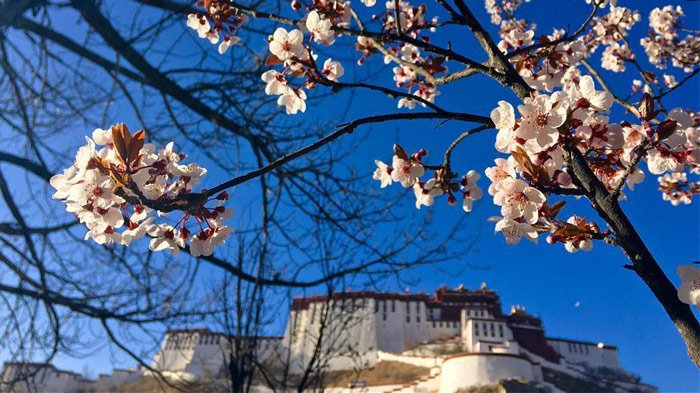 Beautiful view of the Potala Palace in spring.

Temperatures in April can still be fairly cold, with highs of just 8 degrees in the daytime, increasing in May to as high as 11-12 degrees. However, the nights are still cold, mostly well below freezing, and warm clothing is necessary. The main advantage of traveling in spring is that the weather is clear and dry, with bright sunny days that help make the temperatures feel a lot higher.

Autumn is the other great time for trekking, as the summer heat has gone and the rains have all but vanished, leaving the plateau lush and green, yet still dry and comfortable. All across the plateau, the lush green grasses cover the verdant plains. Temperatures in September can still be as high as 12-13 degrees in the daytime, with low temperatures at night in most of the areas outside Nyingchi and Lhoka.

October sees a dip in temperatures, with daytimes seeing highs of only 8-9 degrees, and at night it starts to drop below freezing once more. The bright sun does make a big difference, though, and the weather feels warmer in the intense sunlight of the plateau’s lower atmosphere. As October rolls around, the trees start to lose their leaves before winter sets in, and the ground becomes covered with a multi-colored blanket in the wooded areas of the plateau. Once again, autumn has the advantage of having less rainfall and pleasant weather, which makes trekking in Tibet in the autumn a joy.

Most Popular Tibet Trekking Routes in Spring and Autumn 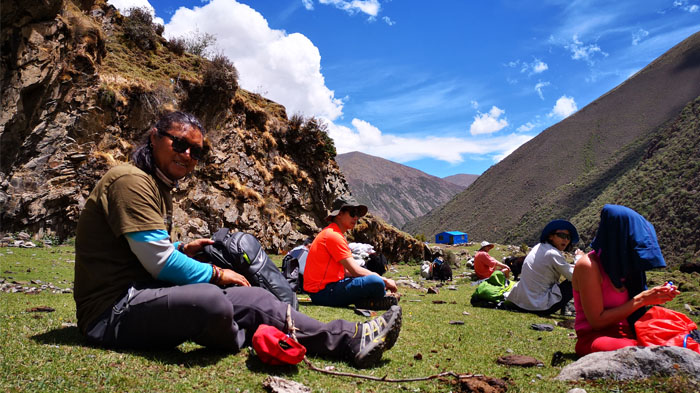 Having a rest on the hillside during the trek from Ganden to Samye.

This trek route covers lakes, beautiful alpine forests, and meadows, and you have a good chance of seeing nomads and their herds of yaks, as well as many of the beautiful birds in the alpine areas of the trek. This hiking may begin less than 50 kilometers from Lhasa, but it is a demanding 4-5 days of trekking, over a distance of 80 kilometers that crosses two high passes over 5,000 meters above sea level. And if you feel like you will not be able to finish it in the days given, you can extend it one day more to make the trek a little easier.

The trek from Old Tingri to Everest Base Camp, covering about 70 kilometers and taking 4 days, takes you through two high passes and across two flowing rivers. On the way, you will be able to see the stunning sights of Mount Everest, as well as other high mountains, such as Mount Cho Oyu, which is also above 8000 meters. 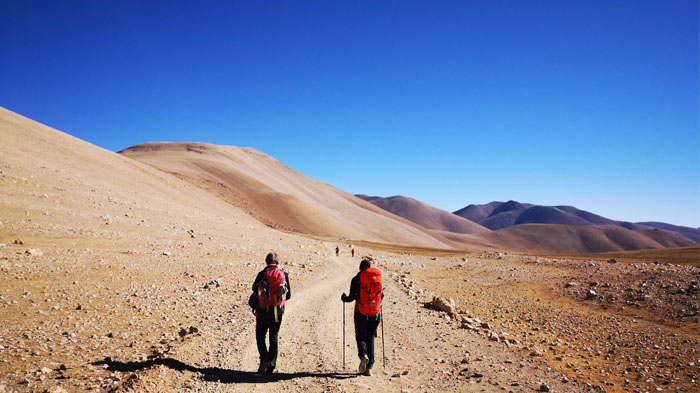 Our clients were trekking from Old Tingri to EBC.

The route is almost directly south from Old Tingri, and follows the valleys down towards the Qomolangma National Park, crossing through several local villages and settlements along the way. While this is not the hardest of the treks in Tibet, it is one of the most interesting in terms of cultural discovery, and the view of the world’s highest mountain getting nearer as each day passes is astounding.

The Kailash Kora trek, in the Ngari Prefecture in the far west of Tibet, is one of the hardest of all the trekking routes in the region, and while it may only be three days long, it is a tough three days. The trek follows the ancient pilgrimage route of the ritual kora around Mount Kailash. Renowned as the most sacred mountain in the world, Mount Kailash is held as sacred in four religions, and has never felt the tread of mortal man.

The kora route covers a distance of 52 kilometers, and trekkers take it in three stages: from Darchen to Drirapuk, the first monastery you will stay in; then on to Dzultripuk, the second monastery, crossing the high Drolma La Pass at more than 5,000 meters; and the final leg from Dzultripuk along the valley back to the plain to the south of the Gangdise Mountains. Not a trek for the faint of heart, the Kailash Kora is also something of a spiritual experience, knowing that you are trekking around a mountain that only gods and legends have set foot upon.

Trekking in Tibet in Summer

Summer in Tibet is the time of the warmer weather and the highest rainfall. Summer, from June to August, is the monsoon season on the plateau, and while the high Himalayas do prevent much of the rain from the Indian Monsoon from hitting the plateau, it is still very wet in some places. The higher oxygen content does mean that acclimatization can be a little easier in the summer months, but it is not always suitable for trekking. 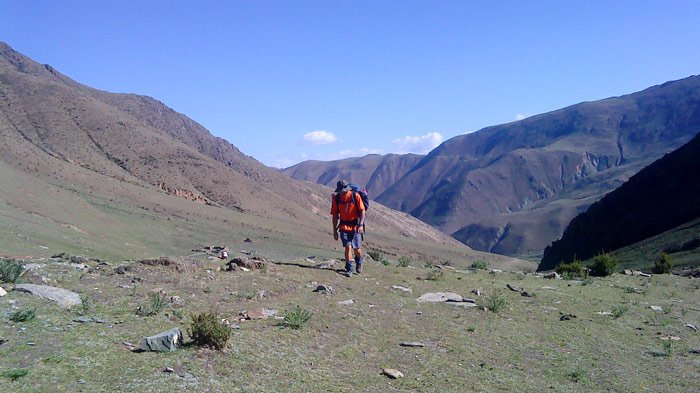 One of our clients is trekking in Tibetan summer time. 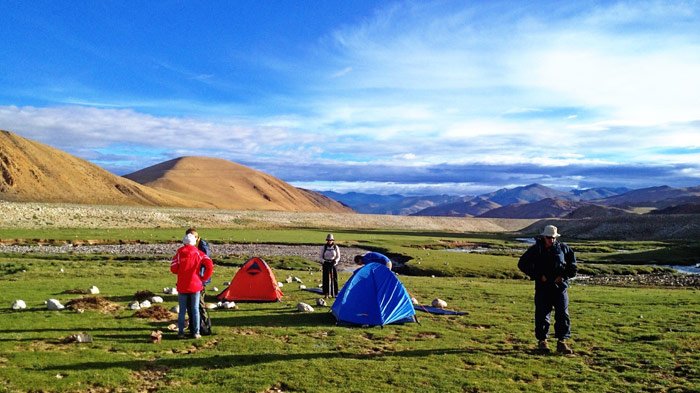 Tourists enjoy their Tingri to Mount Everest trek in June.

While some of the areas do have less rain, there is a danger of mudslides in the more remote areas of the west, so trekking there depends on how much rain has fallen. Most of the rain, however, falls in the late afternoon and evening, so days are free to trek and explore in sunny weather. And there are some treks that can be done despite the adverse rains.

Trekking in Summer is still Possible

One of the best treks to take on in the summer months in Tibet, this amazing trek from Damxung to Lake Namtso takes you over the mighty Nyenchen Tanglha Mountains, crossing the high Kyang La Pass at 5,330 meters above sea level. A three-day trek, you will pass through the spectacular gorges and valleys of the Nyenchen Tanglha Mountain range as you make your way towards the heavenly Lake, one of the Great Three Sacred Lakes of Tibet. With an average altitude of around 4,200 meters, the trek winds through rocky defiles and canyon landscapes with stunning meadows and rhododendron forests, ending at the ultimate destination for any trek in Tibet, the heavenly Lake Namtso.

Another great summer trek that you can take is the Kailash Kora trek, in the far west of Tibet in Ngari Prefecture. A three-day trek through some of the hardest terrain of any trek in the region, this amazing trek through the rugged landscape of the valleys around the world’s most sacred mountain is made even more astounding by the spiritual experience of the mountain itself.

Reaching altitudes of more than 5,000 meters at the Drolma La Pass, festooned with prayer flags and offering an outstanding view of the Gangdise Mountain Range, this trek is only for experienced trekkers. You will get some of the best views of this unusual pyramid-like mountain of black rock and get to stay at two of the sacred monasteries that are dedicated to the nearby mountain.

Trekking in Tibet in Winter

Winter in Tibet can be mild or extremely cold, depending on where you are. In the east of the region, in Nyingchi and Lhoka, the weather is milder and the temperatures not so cold, though it still reaches well below freezing at night. In the far west, the temperatures rarely get above freezing, even in the daytime, and the weather can be extreme at best, with snow on many of the high mountains and passes. 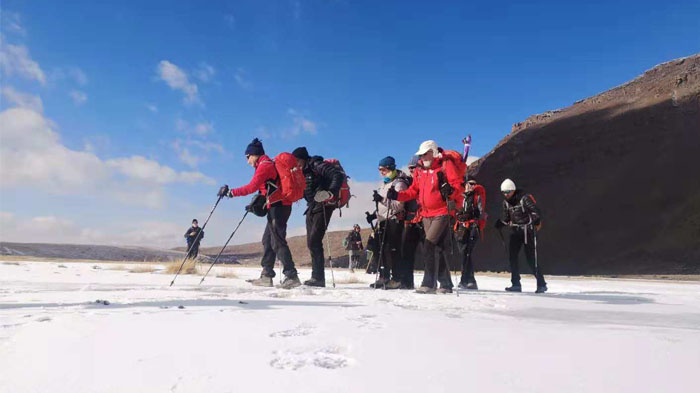 Trekking in winter is still available in Tibet.

However, in the area around Lhasa, it is not so cold, and there are some great treks that can be done in the winter months that will not leave you feeling like you just hiked to the North Pole.

The best trekking route for winter trekkers is the Lhasa Outskirts trek, a one-day trek from Pabonka Palace, on a cliffside around 15 kilometers to the west of the city center, to the Pubjoi Monastery, which lies to the north of Lhasa. The trek takes you through some of the area’s most beautiful countryside, as well as giving you the chance to visit such amazing sites as the Tashi Choling Hermitage, the meditation cave of kings; the remote cliff top hermitage of Tagden Ritro, with its clear natural spring and great views of Lhasa city; the Sera Utse Hermitage, one of the famous Sera Monastery’s many hermitages and nunneries; and the Raka Drak Hermitage, three caves that were used by the founder of the Gelug School of Tibetan Buddhism, Je Tsongkhapa.

Tibet has some of the beats trekking routes in the world, and the best high altitude treks on the planet, from the stunning Everest Base Camp trek and the rough and rugged Kailash Kora trek to the beauty of the Lhasa Outskirts Trek, with its amazing views and spiritual locations. While spring and autumn are the best times to trek in Tibet, with milder weather and clear skies, there is nothing to stop you trekking in both summer and winter too, and we have all you can hope for in amazing trekking experiences for your best Tibet trekking holiday.