While spring and autumn are usually the best times to go trekking in Nepal, the winter trekking season should not be dismissed out of hand. Most people tend to head for Nepal in the spring and autumn to trek around the higher Himalayan mountains such as the Mount Everest Base Camp Trek and the Annapurna Circuit Trek. But there is definitely something to be said for the winter treks in Nepal, though they may not be as high in altitude. The higher-altitude treks are not recommended for the winter months, as the trails can get blocked with snow and avalanches in the higher areas are more likely. In this page, we will present you the Nepal trekking routes available in winter as following.

It is still possible to trek to Everest Base Camp in the winter months, though you will be limited by the amount of snow, and there are times when the trail does get blocked as you get closer to the base camp. The EBC trek in winter is more challenging, so if you want something a little less drastic, the Everest Panorama Trek gives you that Everest taste in a shorter and more comfortable trek. 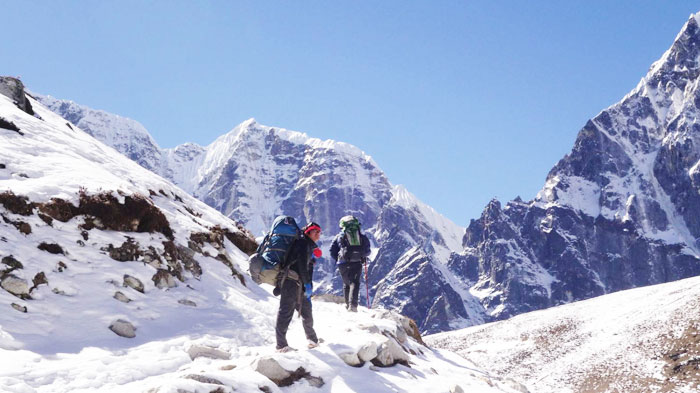 The trek starts with the flight from Kathmandu to Lukla, from where you start the trekking itself, and how long you want to trek for really depends on you. The first part takes you to Namche Bazaar, the Sherpa capital in the Himalayas, and the bustling heartland of the Sherpa people. From there, you can take the hike to the stunning monastery perched high up on the hills above the beautiful village of Thame. If you have more time, you can continue on to Tengboche, where you can visit the famous Dawa Choling Gompa, where the Head Lama gives blessings to trekkers and climbers heading off towards Mount Everest.

Throughout the trek, you get constant views of Mount Everest in the distance, and from Tengboche, if you trek that far, the views of AmaDablam are spectacular. As one of the best winter treks in Nepal, the Everest Panorama trek is ideal for trekkers that want to experience the stunning natural beauty of the Khumbu region but are limited by time.

Of all the winter treks in Nepal, the Annapurna Panorama Trek is undoubtedly one that deserves your attention. Not only is this trek immensely beautiful in terms of landscapes and scenery, but it is one of the most memorable treks in the region. The trek starts from Pokhara, to the west of Kathmandu, and heads through some of the most prominent villages and settlements of the Annapurna Region. Passing through both Gurung and Magar villages, you will be able to experience these unique cultures at first hand, and see the difference between those amazing people and the more westernized culture in the Nepali capital. 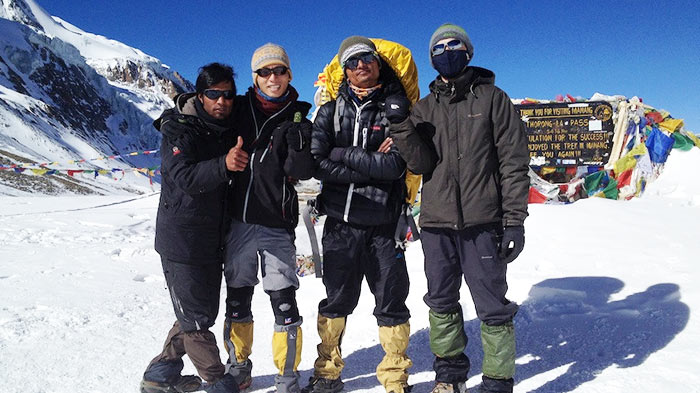 Annapurna panorama trek is one of the most popular trekking routes in Nepal.

However, the best highlight of the trek is the climb up to Poon Hill, the famous vantage point from where the view of the Annapurna Massif is unforgettable and indescribable. You also get to see the stunning sights of the other high mountains in the region, such as Dhaulagiri, Machhapuchhre, Manaslu, Nilgiri and the Lamjung Himal, which are all absolutely breathtaking. When you combine the trek itself and the visit to Poon Hill with the beautiful river valleys and the amazing Himalayan landscape, the Annapurna Panorama trek is among the best winter treks in Nepal.

If you are looking for that off-the-beaten-path winter adventure, then look no further than the Langtang Valley Trek, which passes through the Langtang national Park, close to the border crossing with Tibet. This trek is one that is not visited by many trekkers, even in the summer, due to the out-of-the-way nature of the valley. However, if you are looking for peace and solitude, there is nowhere better in the world than in this beautiful valley.

Known as the “valley of glaciers”, the Langtang Valley itself is one of the most stunningly beautiful places in Nepal, and the majestic views of the mighty Himalayas dominate the landscape at every turn. The wild and rough terrain of the valley is backed against the snow-clad mountains, with more than a dozen Himalayan glaciers that extend their long tongues into the valley. And the Langtang Mountain is an impressive sight when seen so close up. 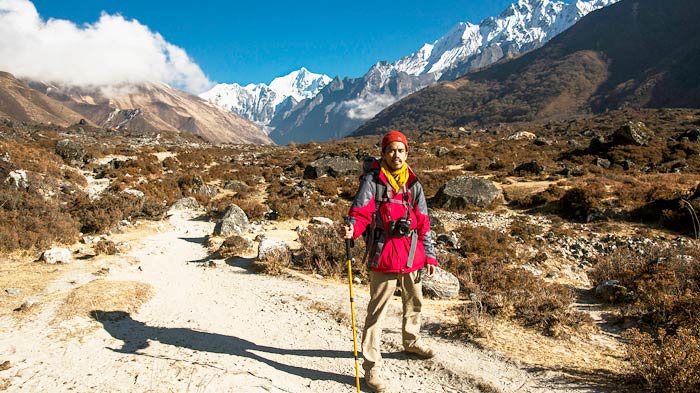 The valley itself is filled with jade-green grasslands that are the pastures of yaks and horses, and the landscape is as impressive inside the valley as the mountains that surround it. The valley is also the home to hundreds of species of local and migratory birds and dozens of species of wild animals, some of which are extremely rare. As you travel along the trail, you will also get the chance to visit some of the local sights, such as the famous cheese factory, where the cheese is freshly made from yaks’ milk, and the Kyanjin Gompa, one of the most revered monasteries in the region for the local people. The religion of the area is Tibetan Buddhism, and most of the people in the valley are of the Tamang ethnic minority, devout Buddhists with traditions and a culture that is akin to Tibetans.

If you are a little short on time, or do not want to head up to the higher elevations of the Himalayas and the panorama treks that are popular in winter, then trekking around the Kathmandu Valley is one of the best options for winter tourists. Even with its mild winter weather, the Kathmandu Valley is not full of people in the winter season, and the stunning sights of the valley itself are less crowded and easier to see. Without the crowds of people, the treks are also much more pleasant, and a lot more peaceful.

Kathmandu Valley has a wide variety of treks that you can take, from day-long treks around the most popular tourist sights to three and six-day treks around the rim of the valley, getting into the lower foothills of the Himalayas. The Kathmandu Valley Rim Trek is an amazing trek that takes you around the valley in a stunning experience of local culture, amazing sights, and spectacular panoramic mountain views. As well as being able to hike between the amazing temples of Pashupatinath and Swayambhunath, known locally as monkey temples for the huge numbers of small monkeys that have taken up residence, you also hike outside these tourist traps to the more natural landscape of the foothills that surround the valley. The trek gives you an amazing and constant panoramic view of the Himalayas, stretching from the Annapurna Range in the far west to the Everest Massif to the east, and passes through the beautiful Shivapuri Watershed and Wildlife Reserve, where many varieties of birds and wildlife can be seen in their natural habitats. 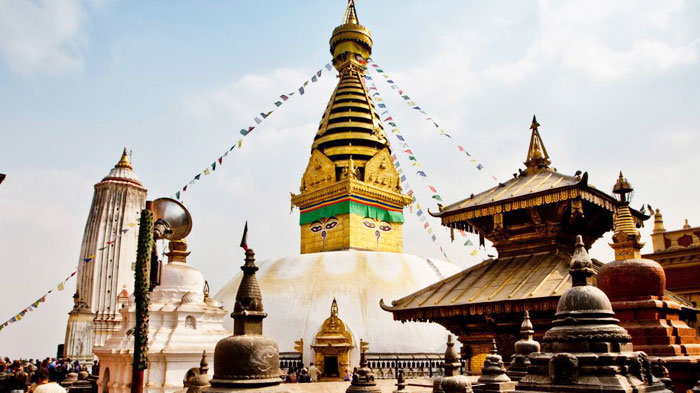 Swayambhunath is one of the famous landmarks in Nepal.

If one long trek does not appeal, then you can spend your days doing shorter treks, and relax in your comfortable hotel afterwards. Trekking through sub-alpine forests and the quiet countryside of the Kathmandu Valley’s surrounding hills makes a great short break from the busy life of the Nepali capital. There are many short treks to choose from, which can be done in a day, and give you a great experience of the cultures of the Kathmandu Valley area.

Day-long treks include the hike to Phulchowki, the highest hill close to the city, which runs from Godavari, 14km to the south of Kathmandu. The trek passes through thick ancient forests of rhododendrons and oaks, as well as wide meadows and bubbling streams. You can also take the trek to the summit of Champadevi, in the southeastern corner of the valley, or the trek through the Shivapuri National Park from Sundarijal to Chisapani, a settlement of Brahmin, Gurung, and Sherpa people.

Nepal’s first ever national park is not just a safari park where you can see the amazing Bengal tiger, as well as crocodiles, rhinos, and elephants from the back of a jeep. It is also one of the most amazing low-altitude treks in Nepal, taking to the trails through the jungles of southern Nepal on a half-day or full-day hike. It is not advisable to camp in the park, and indeed it is not allowed, and you will need to have a guide for the trek in the park itself, but it is worth it to get a better view of the immense amount of wildlife that calls this jungle home. 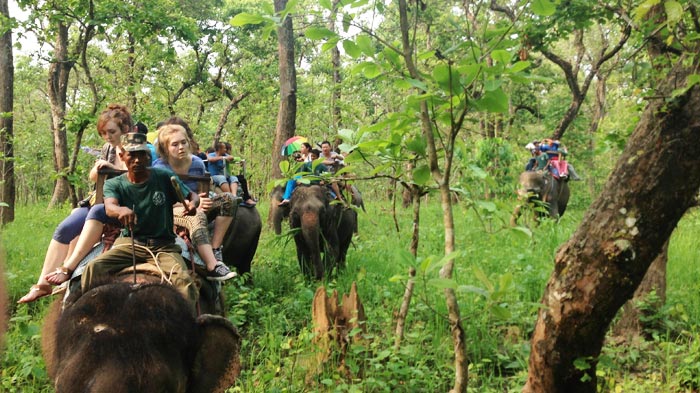 Nepal Chitwan National Park is a place where travelers can get a chance to have close encounters with wildlife.

If you are not into the wildlife, the Chitwan Chepang Hills Trail is one of the most amazing treks in the south of Nepal. Taking you to the highest hill in the Mahabharat Range, Siraichuli Hill, this beautiful trek through southern Nepal’s spectacular countryside is one of the most peaceful ways to spend a few days in the mild southern Nepal climate. The magnificent sunrise and sunsets seen from the top of the Siraichuli Hill is the highlight of this short trek, and the panoramic vista of the distant mountains is stunning.

It rarely ever rains in the winter months from December to February, which means the skies will be crisp and clear, and the views of the mountains will be the best of the year. And since the winter months are considered to be the low season for trekking in Nepal, you will easily be able to get a bed in the lodges and teahouses along the trails. Moreover, the trails will be less crowded, which makes the trekking much more enjoyable. And with the winter in Nepal’s lower altitude areas being relatively mild, it is possible to trek in the winter and not freeze.