Located to the northwest of Kathmandu and to the north of Pokhara, Annapurna region of the Himalayas is an ideal place to discover the delights of high-altitude trekking through a region of outstanding natural beauty. However, knowing when to go is one of the most important factors of any trek in the Himalayas. Travel to Nepal at the wrong time of year, and you may find that your opportunity to trek the mountains has gone. Let’s follow our trekking expert’s tips and learn more of the weather pattern and different trekking seasons in Annapurna Region.

Climate and Weather in Annapurna Region

Lying in the midst of the western Himalayas, the Annapurna Region has a distinct climate and weather pattern, and there are times in the year when it is almost impossible to trek there. Spring in the region is one of the best times of the year, though it can be a little cold. Spring in the region is one of the main seasons when trekkers head for the range, as the temperatures are mild and the rainfall is very low. Trekking conditions are close to perfect in the months from March to May, with temperatures around the Annapurna Base Camp ranging from freezing to around -8 degrees, and with warmer temperatures in the lower areas. 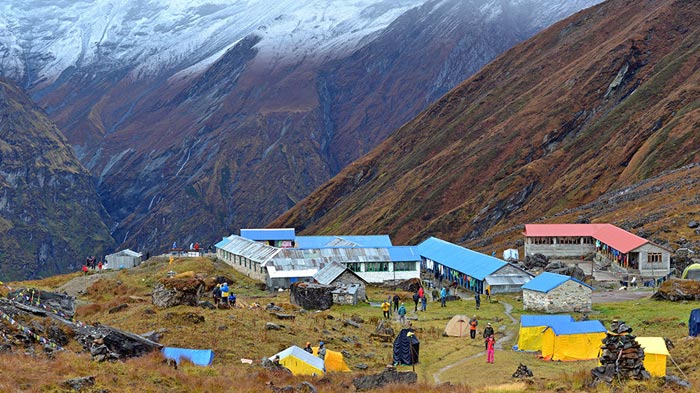 With the great temperature, summer is one of the best seasons to trekking in Annapurna Region of Nepal.

Summer in the region is the monsoon season, and runs from June to the end of August. Summer is also the months when the temperatures are hottest, with daytime highs of around 18-19 degrees, and lows of around 7-8 degrees at night. While this does give you great temperatures for trekking, the monsoon rains can make the ground wet and slippery, which makes trekking hard to impossible. Unlike in many of the mountain regions of the Himalayas, there is no defined rain pattern, and it can rain all day, with an average rainfall of around 130mm throughout the summer months.

Autumn is the ideal time for trekking in the Annapurna Range, and indeed in the rest of Nepal. Autumn runs from September to November, and like spring, it is a season that induces travelers to head for the mountains and the numerous trekking trails. The moderate temperatures and drier weather make for better trekking, while the aftermath of the monsoon season has left the landscape green and verdant, until the middle of autumn when the leaves start to fall. Winds are also milder in the autumn, compared to spring, which still has the biting winds of winter running through it. Daytime temperatures range from 17 degrees in September to around 6 degrees in November, and at night, the range drops to between 4 degrees and -5 degrees.

Winter in the Annapurna Range runs from December to January, and it is not as a popular time to trek due to the colder weather. Most of the area around the Annapurna Massif can get very cold in the winter months, and the daytime temperature of Annapurna Base Camp can get as low as -10 degrees, with extreme lows of around -19 degrees in the depths of winter. Daytime temperatures are usually around 1-4 degrees, which does make it comfortable for trekking during the day, as long as you have a good tent and sleeping bag for the nights of camping. February is not recommended for trekking in this region, as the temperatures are too low and the snows can block passes, and avalanches are a huge possibility.

The Annapurna Range is not one of the wettest of the regions in Nepal in the monsoon season, and while it may not have a lot of rainfall through the months of June, July, and August, it is enough to make the trails slippery and increase the cloud cover. This means that there is little chance of getting a good view of the surrounding Himalayas, so if good views are your preference, then summer should be avoided. Similarly, the depths of winter can be just as bad, with snowstorms covering parts of the region, and almost zero visibility. December and January can be clear, but with colder weather and a chance of snow, there is no guarantee that the views will be any good. 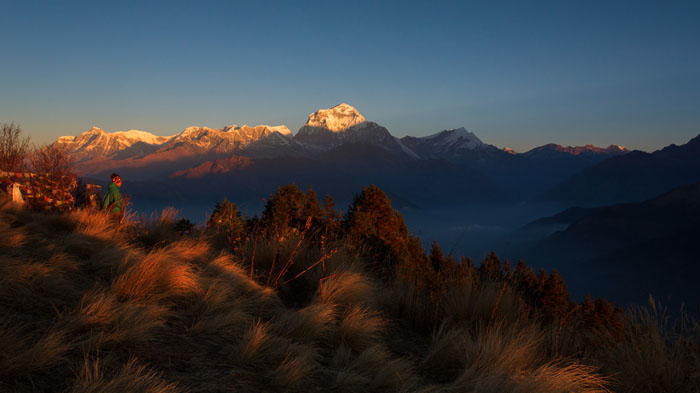 Enjoying the incredible sunrise of Himalayans in autumn.

Spring and autumn are the optimum periods to trek in the Annapurna Range for the best views, with autumn being the main preference. While both seasons have relatively clear skies, the approach of the summer and the monsoon season in May means that clouds start to increase as the monsoon gets nearer. The most ideal time is in the autumn, from September to November, when the skies are at their clearest. Once the monsoon rains have dissipated, the skies tend to be clear and bright most of the time and the area is dry with comfortable temperatures. Autumn is the most popular time for trekking in the Annapurna region, and the trails can get very busy with trekkers.

>> Best Time to Trek in Nepal: choose the right time for trekking in Nepal

Best Time to Trek in Annapurna for the Budget Travelers

If you are working on a budget, then you really need to avoid the peak seasons from March to May and September to November. These are the busiest times to trek in Nepal, and the prices of accommodation and food are at its highest. Even the teahouses can put their prices up in the peaks seasons, based on supply and demand. For most trekkers traveling to Nepal and the Annapurna Range on a budget, then the best times to trek are outside the peak seasons.

Summer in the Annapurna region can be a wet time of the year, but for those on a budget, it is still possible to trek in June, as the rains are not as bad or as frequent, and the temperatures are not yet as hot. June usually sees an average of around 39mm of rainfall throughout the month, which means that most of the days will be fairly dry, and with the average daily temperatures only reaching around 18 degrees, it is still comfortable for trekking. It is also warmer at night than in the spring and autumn, with temperatures ranging from 4 degrees to as low as freezing on the coldest nights. A good sleeping bag is essential, and you will not notice the colder nights. And with it being outside the peak season, the prices are already lower in preparation for summer.

Best Time to Trek in Annapurna for Cultural Explorers

If you are looking for the cultural experience of the Annapurna Region, then almost any time of year is possible for trekking, though you should still avoid the wettest and coldest months. The Annapurna region of Nepal is the home of various Nepali ethnic cultures, and through most of the valleys in the region, you will find small villages of Gurung, Magar, and Brahmin peoples, isolated from the rest of the country in the mountainous areas of the Annapurna Range. Trekking through the valleys of the region can give you a great insight into the cultures of these ethnic people, many of which are Buddhists, following the Tibetan Buddhist religion of the plateau. 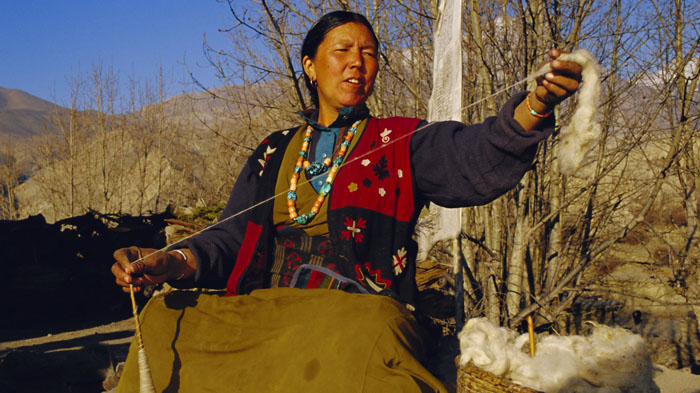 The people of the Annapurna region are mainly farmers and herders, with herds of yaks and sheep in the valleys and fields of rice and wheat lying across some of the valleys like a patchwork rug. It is also these people that are the basis of one of the world’s most famous military regiments - the Gurkhas. One of the British regiments of soldiers, made famous by their bravery and the unique “kukri” knife that all Gurkhas carry, the Gurkha soldiers are chosen from the people of these small villages high in the Annapurna Mountain Range, and to be chosen is considered an honor among the people of these villages.

The Annapurna region of Nepal is one of the best areas of the country for trekking, and the region benefits from the rain shadow effect of the mountains, which means it sees less rain than much of Nepal in the monsoon season. Trekking through the Annapurna Range, on either the Annapurna Circuit trek or the Annapurna Sanctuary Trek to the base camp, is an experience that should not be missed. From the delightful views of the spectacular Himalayan Mountains and the beauty of the region to the cultural experience of learning more about the many local ethnic people that inhabit the region, there are few better places to explore the mountains of the Himalayas in Nepal. Small wonder that this area of the Himalayas is one of the most popular places to travel to, and with the exception of the Mount Everest Base Camp trek, the major treks of the Annapurna region are undoubtedly some of the best trekking trails in the world.

0 Comment ON "Best Time to Trek in Nepal Annapurna"