Best Time to Trek in Nepal: choose the right time for trekking in Nepal

Shortly after you decide where to trek in Nepal, the next big thing would be when you can trek in this region, and what the weather is going to be like during your journey. While there are defined trekking seasons in Nepal in general, there are also different trekking seasons for a particular trekking region of the country. Knowing that beforehand is of primary importance to your trek. And let’s take a closer look of the weather in top 5 trekking regions in Nepal and learn how to choose your best time to trek in Nepal.

There are five main regions in Nepal for high-altitude trekking, and each has its own regional climate and weather patterns that dictate when the best time to trek in each region is. Knowing when these are, and when you can safely trek, is an important part of your trek preparation.

The Everest Base Camp (EBC) lies in the Khumbu Region of Nepal, close to the border with China, and while the highest areas of this region are known for having extremely cold weather conditions, as well as an adverse climate, there are certain times of the year when the weather is stable enough to trek safely in the region. These milder times of year make it the perfect time to trek in the Everest region. 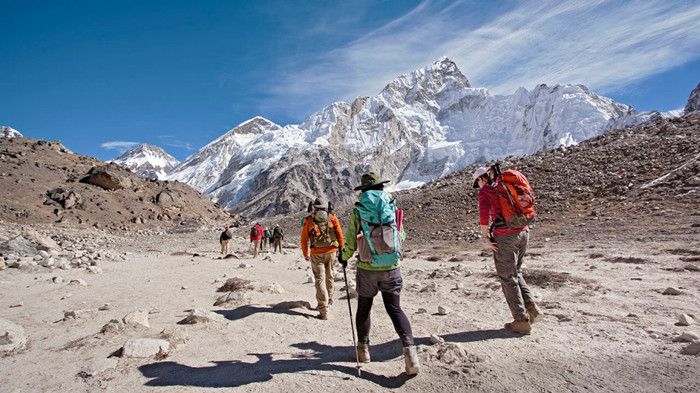 Autumn is the best time to trek Mount Everest Region in Nepal.

The autumn (mid-September, October, and November), is the best times to make the trek from Lukla to Everest Base Camp and around Gokyo. The weather is stable, albeit getting colder by then, and while clear days are more common now, colder days and nights can be expected.However, while this is the best time for weather, it comes at a price - the routes are always at their busiest at this time of year and the trails can become crowded.

February to May is spring in the Khumbu Region, and is the most popular time for trekking in the region as a whole. The weather is mostly stable and dry, though the occasional freak snow shower can still occur right into March.

While summer may be the warmest time of the year, it is far from the best time to trek, as the summer months are also the monsoon season in the Khumbu Region.IF you are after fewer people, from late Nov to early Dec can be a wise choice. You won’t experience the hustle and bustle caused by long lines of trekkers on the same mountain trails to EBC.

Equally important to trekking in Everest Region, the Annapurna Region is the area around the huge Annapurna Massif, the area of the Annapurna Circuit Trek. As with most trekking areas in the northern central region of Nepal, the spring and autumn seasons are the best times for trekking. The spring in the Annapurna Region is shorter than at Everest, running from March to the end of April, with May being a month that is much hotter and drier to trek comfortably. These two months are the second best option for trekking in Annapurna, as the rhododendrons are in bloom, and the weather, albeit a little chilly, is comfortable and the skies are clear and bright. 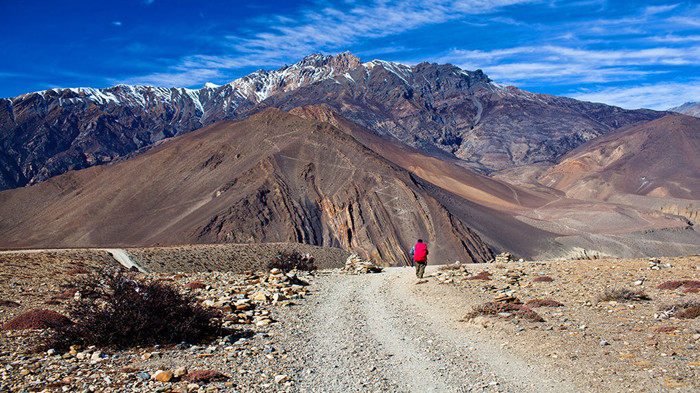 The best time to trek in Annapurna Region is from October to the middle of November.

For the best season for Annapurna, you need to come in the autumn, from October to the middle of November, when the rains of the monsoon season have passed, and the air is still warm, yet clear, with bright skies and dry conditions. The temperature is comfortable, and the slopes are not too moist and slippery by then.

Insider Tips: Due to the annoying leeches, muddy mountain trails, and dense clouds, you are not advised to trek in Annapurna Region from June to early Sept.

The Manaslu Region is well known for having a wide range of altitudes, temperatures, and unique micro-climates, which makes it harder to pick the best time of the year for trekking. However, with a little knowledge, you will soon discover that this unique region can be trekked at any time of the year, with a little care and preparation. January and February are cold, with clear skies and fresh air, and as long as you can avoid the irregular storms that visit the area, you can safely trek around the areas of Larkya Phedi and Bintang. 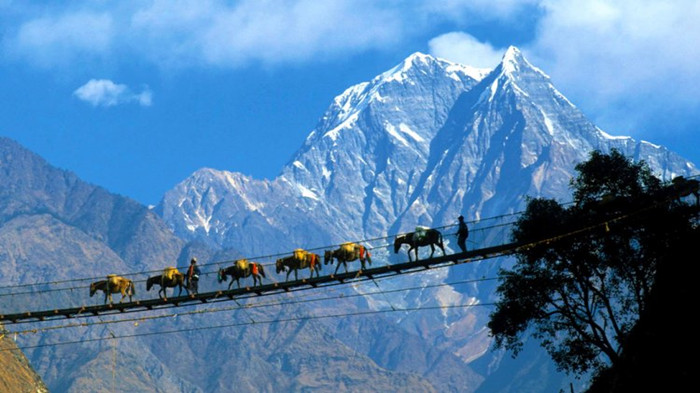 Trekking in Manaslu Region can be done at any time of the year.

March to April is the first of the good weather periods, when the temperatures are warming up and the skies are clear and bright, making them ideal for a Manaslu Circuit Trek. May is a hot month, and treks are best kept to the higher regions where the temperature is not so harsh, while June starts to cool down and some rains begin, which most trekkers avoid, so it is a nice time for solitude and tranquility. July and August are the monsoon months, and while it can be wet, there are few landslides in the region, and fewer open lodges and teahouses. As the monsoon dies out in September, trekking begins again in earnest, and right through to November, the trekking rails are at their busiest, with bright clear skies and dry trails. Even in December, while it may be starting to get cold, it is still possible to trek in the region, with little in the way of snow, and no rain at all.

Part of the Langtang National Park, the Langtang Valley is a very popular trekking area, and a great place to trek for the traditional Nepali cultures in the local villages. As the highest altitude you can reach in Langtang is around 5,000 meters, it means that you can happily trek there throughout most of the year. Spring and autumn, from March to May and September to November, are the best times of the year, with clear skies and bright sunshine. 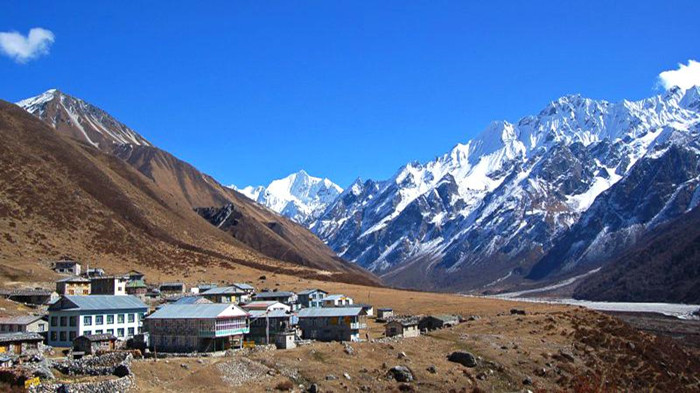 Lodges and teahouses along the trek route of Langtang Region.

Even the winter months, from December to February, are great for trekking in the Langtang Region, since the temperatures, while cold, rarely fall below freezing during the daytime. The summer, however, is the monsoon season, and as the park is in a lower altitude area than most of the major trekking regions, it is more susceptible to the heavy monsoon rains from India.

Lying to the northwest of the Annapurna region, the Mustang region is one of the most unique regions of Nepal, not only because of its unique geographical features and strange rock formations and colors. It is the one region of Nepal where you can safely and comfortable trek at any time of the year, even in the winter and summer monsoon seasons. The Mustang Region lies in the rain-shadow of the Annapurna Massif, which means that this region of Nepal gets far less rainfall than anywhere else in the country, making it the perfect destination for summer trekking. 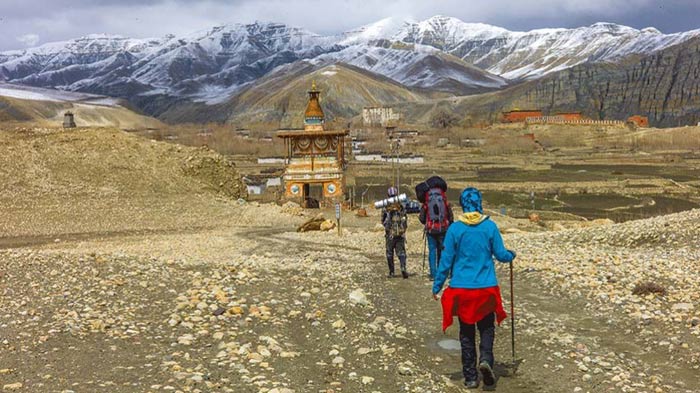 March to May is very suitable for a Upper Mustang Trek in Nepal.

March to May is the spring in Mustang, and the temperatures are increasing, with clear skies and no rain. Summer, the monsoon, runs from late May to the end of August, and is the hottest time of year, with temperatures reaching around 22 degrees. However, the entire region gets so little rain, you can safely trek in the area, especially in Upper Mustang, where it barely rains the entire year.

From September to November is the autumn season, which is less cold than spring, but just as bright and dry. Winter, from December to February, does see a drop in temperatures, especially in the late evenings and overnight. However, the daytime temperatures are still relatively warm, and trekking is good, and a lot quieter as there are fewer people on the trails.

When is the Monsoon Season for Nepal Trekking?

The monsoon season generally runs from June to August, though that can change a little in certain areas, extending sometimes into early September. Trekking in Nepal in the monsoon season is not advisable, as the rains in the summer months in Nepal can be heavy and dangerous. After weeks of heavy rainfall, hillsides start to become unstable, and landslides are a common occurrence in the monsoon season, as can be seen from the many news reports of dangerous mudslides and landslides that can be seen on the news around the world. Trekking during the monsoon in an area where rains can be heavy is foolhardy, and dangerous to yourself and others.

You can trek in many of the regions of Nepal throughout most of the year, and while there are some areas where there are inhibitions to your trekking, there is always somewhere else where trekking is still possible, no matter what time of year it is. So do not be afraid to try another region of Nepal for that summer or winter trek, if you cannot get to the country in the main trekking seasons of spring and autumn.

0 Comment ON "Best Time to Trek in Nepal: choose the right time for trekking in Nepal"