Sherpa people, meaning “eastern people” in Nepali, are an ethnic group at Tibet-Nepal Border. The word Sherpa often conjures up images of assistants helping western climbers reach the top of Mount Everest. Though the word has developed into a position title for anyone hired to help with a mountaineering expedition, it comes from the name of the Sherpa people. If you want a guide or porter to climb Mount Everest, do hire a Sherpa. Sherpa people are professional Mt. Everest Guide. 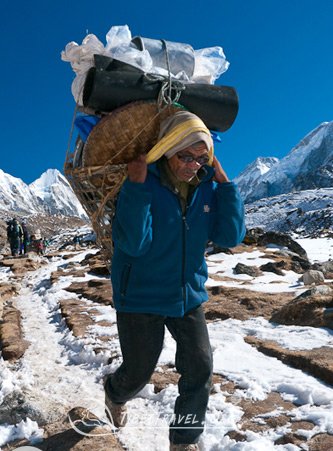 Most Sherpa people live in the south side of Himalayas, mainly in the eastern regions of Nepal. But some of them also live in Zhangmu, Dinggye and Tingri of Tibet. In Fact, the Sherpa migrated from eastern Tibet to Nepal hundreds of years ago. Prior to Western intrusion in the twentieth century, the Sherpa didn't climb mountains; they reverently passed by the high peaks of the Himalaya, believing them to be the homes of the gods. The Sherpa eked their livelihood from high-altitude farming, cattle raising, and wool spinning and weaving. 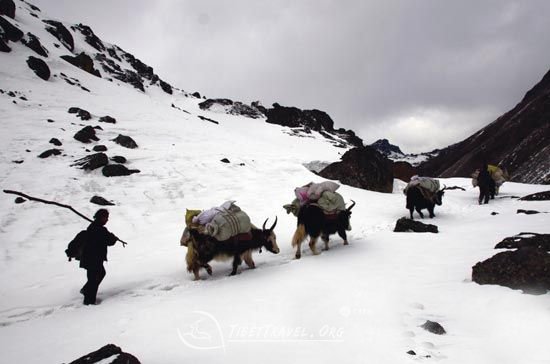 The Sherpa were nomadic people and then primarily settled in the Solukhumbu District (khumbu) district and then gradually moved further westward. Salt trade occurred along these routes. In oral history, four groups migrated at different times giving rise to four main Sherpa clans, Minyagpa, Thimmi, Sertawa and Chawa. There are over 20 clans today which are sub-groups of the four. About 1840 Sherpa ancestors migrated from Kham. Mahayana Buddhism religious conflict may have contributed to the migration in the 15th and 16th centuries. Sherpa migrants traveled through Ü and Tsang, before crossing the Himalaya. Sherpas are highly regarded as elite mountaineers and experts in their local terrain. They were immeasurably valuable to early explorers of the Himalayan region, serving as guides at the extreme altitudes of the peaks and passes in the region, particularly for expeditions to climb Mt. Everest. Today, the term is often used casually—and incorrectly—by foreigners to refer to almost any guide or porter hired for mountaineering expeditions in the Himalayas. Sherpas are renowned in the international climbing and mountaineering community for their hardiness, expertise, and experience at high altitudes. It has been speculated that a portion of the Sherpas' climbing ability is the result of a genetic adaptation to living in high altitudes. Some of these adaptations include unique hemoglobin-binding enzymes, doubled nitric oxide production, hearts that can utilize glucose and lungs with an increased sensitivity to low oxygen. It wasn't until the 1920s that Sherpa became involved in climbing. The British, who controlled the Indian subcontinent at the time, planned mountain climbing expeditions and hired Sherpa as porters. Though numerous expeditions made the attempt, it wasn't until 1953 that Edmund Hillary and a Sherpa named Tenzing Norgay managed to reach the 29,028 foot (8,848 meter) peak of Mount Everest. Due to their willingness to work and ability to climb the world's highest peaks, mountaineering became part of the Sherpa culture.