Like with any other culture, Birth and Death in Tibet are two stages of life that are attached a lot of importance. There are a whole host of rituals and philosophies associated with birth and death in Tibet. This is directly related to the Buddhist and local animist culture there. Tibetan Buddhists strongly believe in life after death and reincarnation.

In fact, the concept of death is so deeply interwoven in Tibetan culture that Tibetans try to spend their lives doing meritorious deeds and performing sin cleaning rituals in order to get a favourable rebirth. 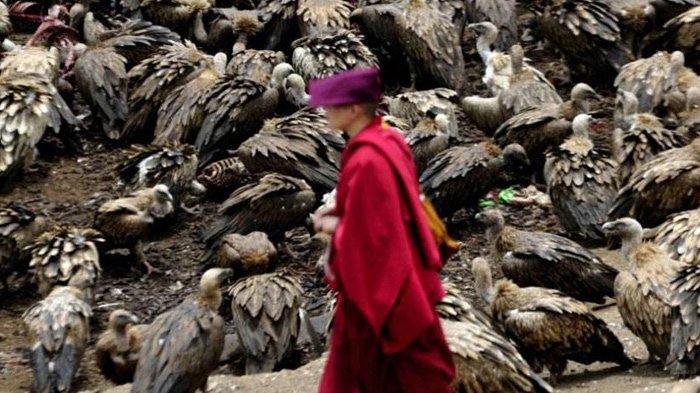 Tibetans have an interesting take on death. They believe that death is not the end but the gateway to a different beginning. In Tibet, there are different ways of burial and different funeral customs according to this burial. This article will discuss them.

Sky Burial- The first in our list is Sky Burial. Sky Burial is a very unique and rather macabre way of disposing the dead. It is not really a burial because the corpses are not buried anywhere. Instead they are left on very high, isolated places for vultures to devour. Yes, you read it right, Vultures eat the dead bodies. This method is primarily used by commoners. 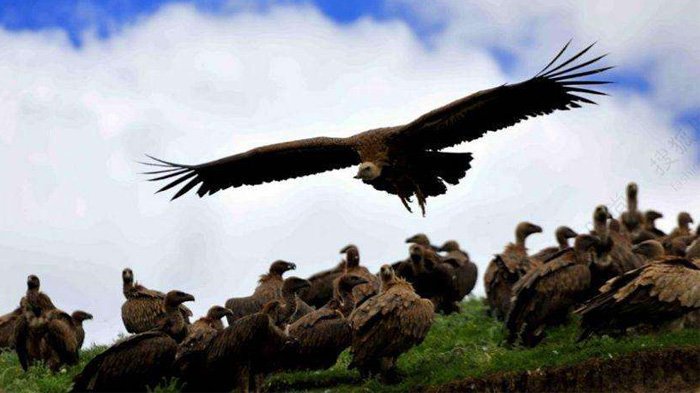 Philosophy behind the sacred ritual 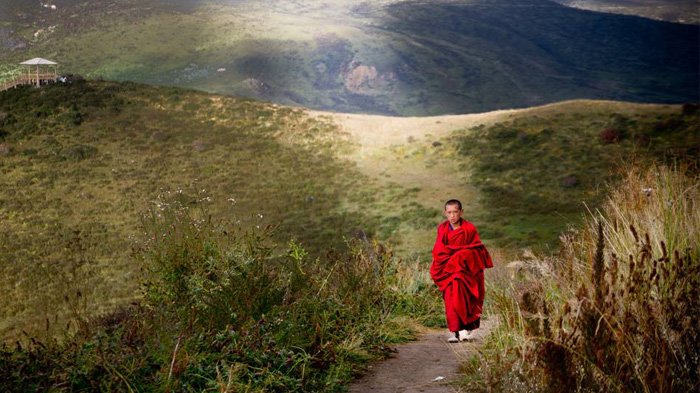 Vultures which eat the body are considered sacred. Tibetans believe that if a vulture eats the body, the soul was pure and has attained a good rebirth. There are certain rituals to this practise. When the body has died, it is kept outside the house for 3-5 days and monks chants mantras and sutras for the soul to migrate from death to the next life. Then it is carried away by the body carrier to a mountain top. There the body is bent into fetal position. A special smoke is released to signal to the birds that a body is available for feasting. Once the birds have finished eating, monks collect the remains and burn them. The ashes are then mixed with barley flour (Tsampa) and made into a broth which is fed to the vultures. This ritual is famous in the Drigung Monastery.

An interesting ritual in this is when the body carriers are carrying the body to the mountain and then dissecting them so the birds feed on the flesh, the body carriers never do this sadly. They instead laugh and tell jokes while doing this as they believe a light-hearted atmosphere will let the soul pass into next life positively.

Some of the taboos which Tibetans observe for this ritual are- Family members as well as strangers are not allowed to attend the vulture ceremony or witness the birds eating the bodies as Tibetans believe that this will bring them bad luck and also prevent the soul from passing on peacefully.

Stupa burial is only used for the living Buddha, high ranking lamas like the Dalai Lama and Panchen Lama. When an important monk dies, his body is embalmed and then placed in the stupa where it will be worshipped. 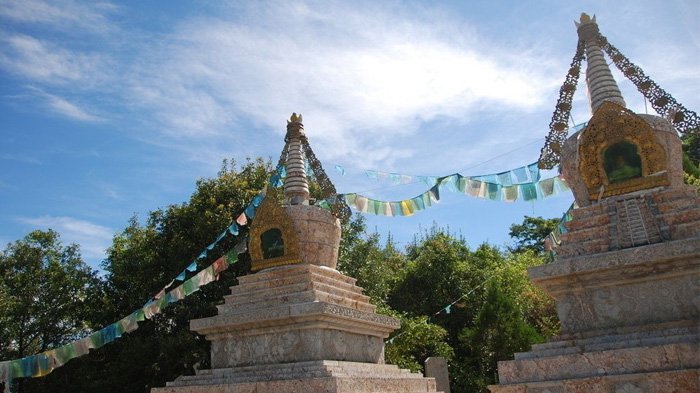 When a Buddha or Dalai Lama or Panchen Lama dies, the body is embalmed using various things like camphor water, mercury water, saffron, and sometimes even gold flakes. All the internal organs are removed. It is wrapped in silk and put in a stupa. Butter lamps are kept burning day and night for weeks on end to show devotion. There are different kinds of stupa and the monk is assigned a stupa based on his rank. The different stupas are made of Gold, Silver, Bronze or Wood. The stupa type depends on the ranking of the lama.

Fire Burial is another type of funeral practise in Tibet. This is primarily meant for other high ranking monks (not Dalai Lama/Panchen Lama) and high ranking officials. The bodies of these people are cremated when they die. Generally after cremation the ashes are collected and scattered in a river or to the winds or buried underground. In some cases the ashes are kept along with some special beads, prayers books, chanting beads, etc. and worshipped. This is usually done only to monks. 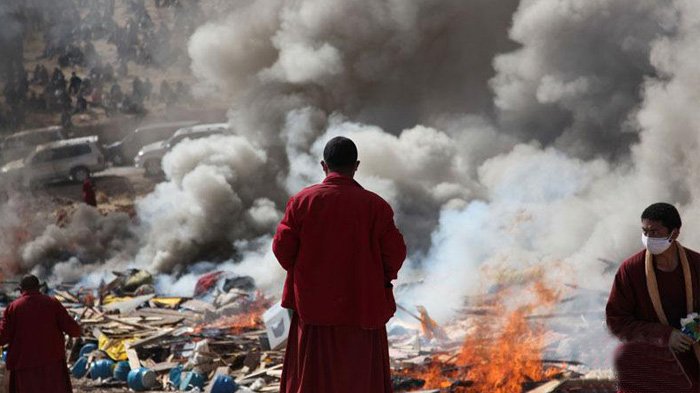 Water burial is not aspopular a funeral style as sky burial or even cremation. It is used for commoners and very low ranking people like beggars, the poor, etc. However this form of burial is more popular in the South of Tibet than in the north as vultures are not widely available. 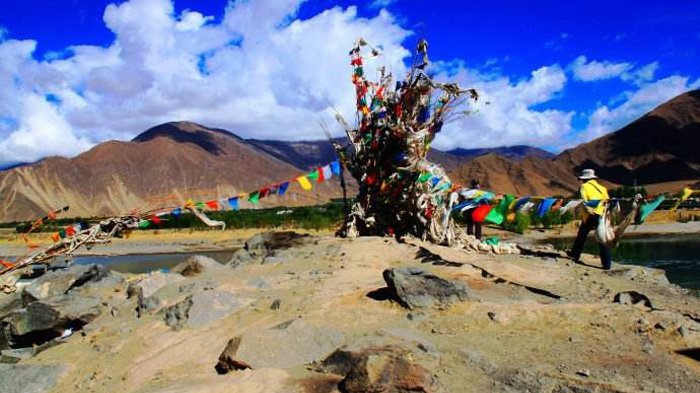 In water burial the body is wrapped in a white cloth and disposed off into a river, where it will be carried away by the waters. It is said to represent one's continuing journey in the waters of life or Samsara. The body is sometimes cut up first and then thrown into the water or it is just thrown whole. The body is eventually eaten by fishes and other life forms in the rivers. People in the south of Tibet have do not eat fish.

Tree burial is another bizarre form of funeral where the dead are buried in a coffin and the coffin is then hung on trees, far away from human habitation. This is practiced primarily in the Nyingchi region. 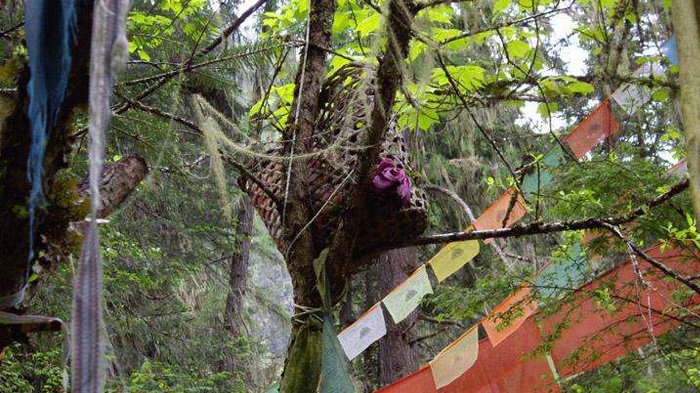 This form of burial is used only for children and aborted fetuses. In this, the body is cleaned with salt water, then it is placed in a fetal position. Then the body is placed in a wooden coffin or basket and this is hung far away from the village, usually in a dense forest. This is done as it is believed doing so will prevent the death of another child in the family. It is also kept far away from the view of the other children as it is believed that if other children view this, similar misfortune may befall them. The casket eventually disintegrates and the body falls to the earth, where it will decompose further.

The above listed practises are the main funeral and burial forms practised in Tibet. There are other forms too like earth burial and cliff burial but they are hardly practised anymore and are extremely rare to encounter. For our Tibetans, death is the beginning of a new journey not the end.