Sky burial is simply the disposal of a corpse to be devoured by vultures. In Tibetan Buddhism, sky burial is believed to represent their wishes to go to heaven. It is the most widespread way for commoners to deal with the dead in Tibet.

a.Preparation And Mantra Chanting
If a Tibetan dies, the corpse is wrapped in white Tibetan cloth and placed in a corner of the house for three or five days, during which monks or lamas are asked to read the scripture aloud so that the souls can be released from purgatory. The Family members stop other activities in order to create a peaceful environment to allow convenient passage for ascension of souls into heaven. 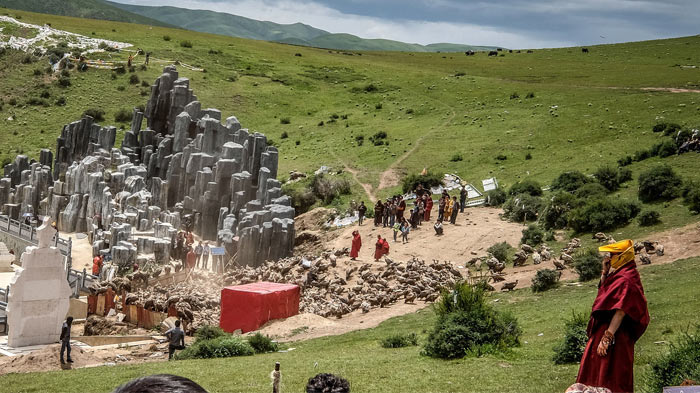 b.Body Dissection for Vultures to Eat
Later, the Family members will choose a lucky day and ask the body carrier to carry the body away to the celestial burial platform. On the day before the burial, the family members take off the clothes of the dead and fix the corpse in a fetal position. Specifically, the body is bent into a sitting position, with the head against the knees. At dawn on the lucky day, the corpse is sent to the burial site among mountains which is always far from the residential area. Then "Su” smoke is burned to attract condors, Lamas chant sutras to redeem the sins of the soul, and a professional celestial burial master deals with the body. 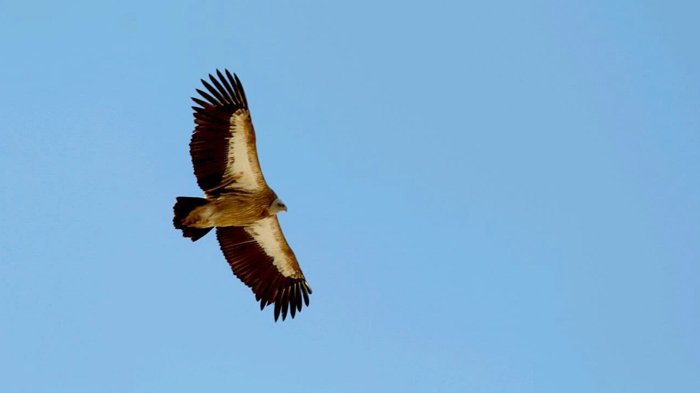 Vultures hovering high above the sky

Practice of sky burial is closely related to philosophy of Tibetan Buddhism. Tibetans believe that if the vultures come and eat the body, it means that the dead has no sin and that his or her soul has gone peacefully to the Paradise. And the condors on the mountains around the celestial burial platform are "holy birds" and only eat the human body without attacking any small animals nearby. Any remains left by the holy birds must be collected up and burnt while the Lamas chant sutras to redeem the sins of the dead, because the remains would tie the spirits to this life.

Besides, there are a lot of taboos in the process of the celestial funeral in Tibet. Strangers are not allowed to attend the ceremony for Tibetans believe it will bring negative efforts to the ascending of the souls. So visitors should respect this custom and keep away from such occasions. The family members are also not allowed to be present at the burial site.

In addition to fierce and menacing vultures, the most intriguing part of sky funeral ritual is the body carrier (also known rogyapas or body breaker). They drag the dead body to the mountaintop and dissect it with blade. The whole process, as opposed to most people’s expectation, is done not with solemn expression or deep sorrow on their face. Instead, body breakers chopped the body with laughter and smell as if they are doing other ordinary farm work, because Tibetan Buddhists believe that keeping a light-hearted atmosphere can help guide the dead to transcend from darkness to the next life. When the flesh is eaten up by vultures, the body breaker will smash the bone into pieces and mix it with tsampa (a staple food for Tibetans, made of barley flour) to feed the vultures.

The following sky burial video may give you a glimpse of the sky funeral in Tibet:

Documentary about sky burial in Tibet

In fact, there are two well-known destinations for sky burial in Tibet. One is the Drigung Til Monastery, located in Maizhokunggar County around 150km east to Lhasa city. The monastery is embedded on the steep rock face of the cliff, overlooking the picturesque Mum Pa Valley.

At the mention of Tibetan funeral customs, sky burial (celestial burial) would pop into our mind immediately. However, sky burial is not the only funeral ritual in Tibet. Greatly influenced by the Tibetan Buddhism and Bon Religion, funeral rituals practiced in Tibet are stupa burial, sky burial, fire burial (cremation), water burial, and internment. Cliff burial and tree burial are also practiced occasionally. The funeral services must follow the rigid hierarchy of ranks, sharp demarcation, and also mainly depends on the divination from Lama.

Stupa burial is the most noble and sacred funeral ritual in Tibet. Stupa is a Tibetan Buddhist religious monument and a sacred burial site. It is reserved for Dalai Lama, Panchen Lama or the Living Buddha. After the nirvana of a high Lama, the embalmed corpse is dehydrated and wrapped with rare medicinal herbs and spices. Gold flakes and saffron are scattered on the body in some cases.

Finally, the corpse is moved to the stupa and preserved for worshiping. Stupas can be elaborate or simple. It can be constructed of gold, silver, bronze, wood, or earth. The type of stupa selected is based on the ranking of the Lama.

Cremation is considered less noble than stupa burial and is reserved for high monks and aristocrats. The corpse is seated on a stack of wood and straw poured with butter and burned. The ashes of the sainted monks will be put in a wood box or an earthen jar and thus and buried in the earth at home or on the top of a hill or in a piece of pure land. Or the ashes will be taken to the top of a tall mountain and scattered with the wind or into the river.

But the sainted Living Buddha or Lama's ashes usually is put into a small gold or silver tower some together with classical books, joss, musical instrument (used in Buddhist or Taoist mass), and treasures. The tower for worship is usually called mourning tower or mourning bone tower.

In water burial, the corpse is wrapped with white cloth and disposed into a river. There are two different views towards water burial. In areas where sky burial is the dominant practice, water burial is considered an inferior way to dispose of beggars and those with low social status. In places where vultures are not available for sky burial, water burial is widely adopted by commoners and the ritual follows a strict set of rules, sacredly and solemnly.

To the Tibetans, earth burial is the inferior form. Earth burial was prevalent in ancient times and was widely practiced by many ethnical clans. However, with the introduction of Tibetan Buddhism, sky burial became the dominant burial rite. Earth burial is now rarely practiced. Only those who suffer from infectious diseases or those killed by robbers or murderers will be buried in this way.
According to Tibetans, these bodies are not clean enough to be presented to the vultures. Earth burial indicates two meanings: One is to eradicate the spread of murrain. The other is to act as a way of penalizing the dead by putting it into the hell.

This is a burial for children. It is commonly practiced in Nyingchi, southeast of Tibet. To avoid being seen by other children, the corpse of the child is placed in a wooden case and hung on a tree in a remote forest.

Cliff burial is practiced in southern Tibet. The embalmed corpse is placed in a wooden box. The box is then placed in the cave off a cliff. The caves are usually 50-300 meters (164-984 feet) above ground.

0 Comment ON "Sky Burial in Tibet and Tibetan Funeral Customs"