Tibetan people are very kind, hospitality and easy-going. They have unique life style and charming Tibetan culture. In daily life, they follows special Tibetan Etiquettes. If you are planning a Tibet tour, you should know how to respect local Tibetans before travelling to Tibet.

If a Tibetan encounters a friend or an acquaintance, he will remove his hat and bow while holding his hatin front of his chest. However, if he meets an official, a senior, or a highly respected person, he should lower his hat as much as possible when he bows. The other person should show exactly the same courtesy in return. Although this custom is fading, it is still regularly used.

Presenting Khatag (a white, loosely woven scarf) is very popular in Tibet. It is a traditional practice of respect and hospitality in Tibet, and will be appreciated by your host. People present Khatag when they visit parents, worship the Buddha, see somebody off, welcome someone home, and so on. Generally, the presenter holds the Khatag with both arms stretched out evenly before him, and makes a little bow. The receiver accepts it with both hands held in front of himself (but not overly stretched out) and immediately puts it on around his neck and wears it, because putting it down immediately is very rude. However, when presenting Khatag to seniors, the two arms should be raised up above the head. When presenting a Khatag to people of the same age or younger, the presenter can tie the Khatag directly to their necks. It is interesting that some Tibetans even take a Khatag with them when they go out in case that they meet friends or relatmoives; and some Tibetans even seal Khatag in letters so that they can send their very best wishes. This custom is derived from the ancient practice of adorning deities with clothing and has evolved into a greeting of respect and caring. 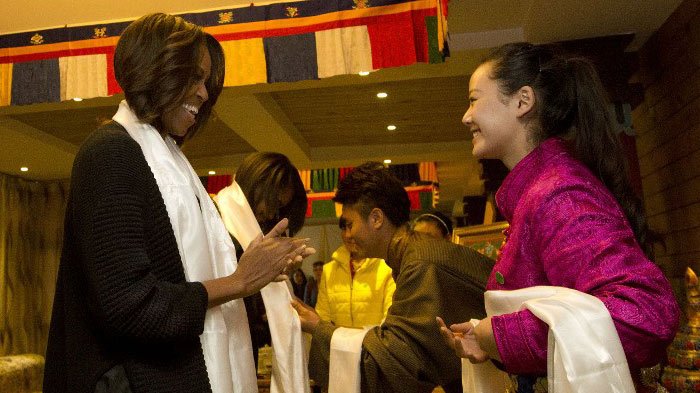 Khatag represents the highest respect to the recipient.

Etiquettes of Visiting Monasteries in Tibet

When you pay a visit to a monastery, remove your hat as entering the temple. Generally, it is not necessary to remove your shoes, even though monks do that. Tourists are allowed to come inside while monks are chanting. Sit or stand in the rear, or walk clockwise around the room— unless it's a Bon monastery, in which case walk counterclockwise. Do not talk aloud or irreverent conversation. Do not photograph anything inside without permission (photography outside is okay). Don't touch the murals, butter sculpture, or other things you see displayed. Do not sit with the soles of your feet facing the altar or any other sacred object or person. It would be a nice gesture to add some money to the little piles of cash you see around, but it's not required. 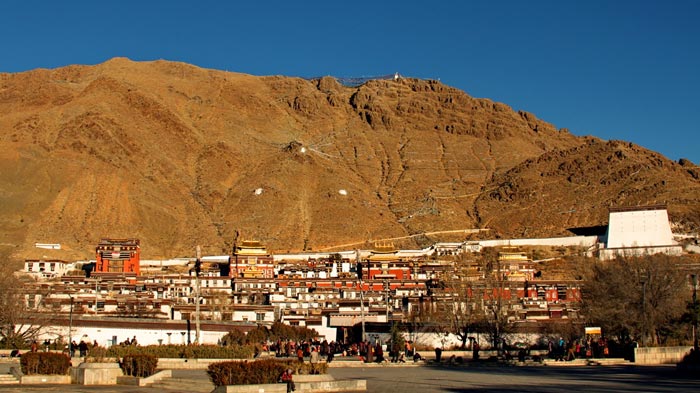 If you have purchased butter or oil as an offering, spoon it into the lamps yourself. You may follow the lead of other pilgrims in bowing to various shrines, but if your heart isn't in it then it's quite acceptable not to. In general, it's okay to wander around the building, and you can go to the roof or enter any room that's not locked—however you should stringently avoid entering chambers on the roof of the monastery where monks may be in retreat. Don't worry a lot about committing faux pas in a monastery, because if you're about to do something wrong, and there's someone around, then they will stop you. Tibetans are really very good natured and will not take offense.

When Tibetans worship the Living Buddha, stupa s and pagodas, they prostrate. Devoutly, they raise their hands together high above their heads, take one step forward, lower their hands to the height of their forehead, take another step forward, lower their hands before their chest and take a third step forward. Then they kneel down and stretch themselves out upon the ground. After arising, they repeat this process. While they are performing prostrations, they chant sacred words, usually: Om Mani Padme Hum. Many pilgrims spend several years traveling from other provinces to Tibet performing prostrations each and every step of the way. Even though some people have died while on the road, it is never considered a pity as having traveled toward Tibet in this manner is a lifelong honor. 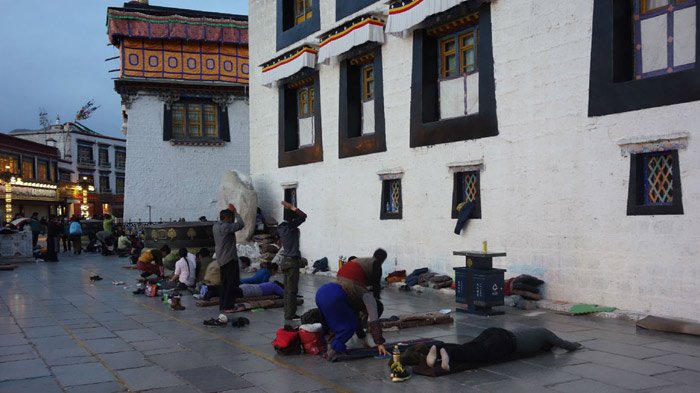 Sincere pilgrims are prostrating in front of Jokhang Temple.

Being a Host or Guest

As a host, a Tibetan should always let the guest be first, no matter walking or talking. People must sit cross-legged as it is very rude to let the sole of your shoes or feet point towards other people. And a hostess or one of the family's children will pour a bowl of yak butter tea for the guest. The guest must wait quietly until the host carries and presents the bowl of tea with both hands and the guest takes the tea from the host in the same manner. Then, the guest can enjoy the tea and conversation. As a polite guest, one does not empty his bowl as a never empty bowl signifies lasting abundance. The host will add more tea to your bowl to ensure that it is never empty. 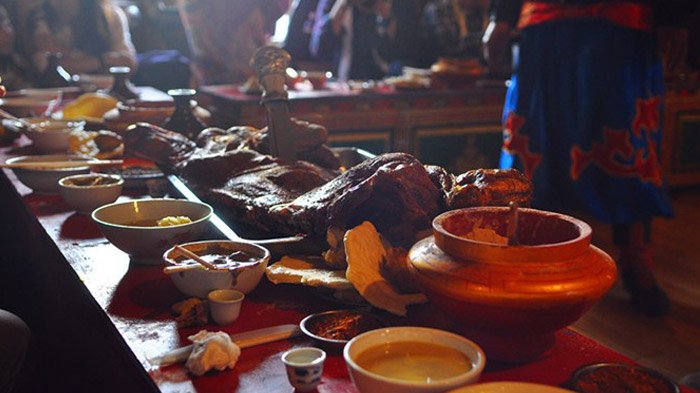 During festivals, a guest will be offered chang (a special Tibetan drink). Before drinking, the guest first lightly dips his third finger in the bowl, and upon withdrawing his finger from the bowl, snaps the liquid on the finger into the air. This should be done three times as a symbol of making a sacrifice to the sky, the earth and one's ancestors. Afterwards, the guest sips only once from the bowl, and then allows the host to fill it. This is also done three times, and the fourth time the guest drinks, he must empty the bowl. After this process is completed, the guest can drink as much as he likes. In fact, he must drink a lot or the host will think that he is not pleased with the treat or that he is very unfriendly. There is a saying that underlines the importance of this ritual: 'One bowl only will make good friends enemies.'

Tibetan practice what is known as Sky Burials are very private ceremonies where the family and close loved ones of the deceased pay their last respects. This practice is not familiar to most of us and is very unique. Even so, it is considered highly offensive to intrude upon a family at this time, including taking pictures.

Tibetans are exceedingly courteous and have rules governing their relationships. For example, polite language is widely used in Tibet. Tibetans use it when they are addressing seniors, people with higher social status or people of the same age and same status. If they call someone, they will add 'la' after the name to show their respect. Some Tibetans still believe that photos can steal their soul and whether or not you agree, taking pictures of people without their permission can be intrusive.