When you are traveling in Tibet, it is very common to come across many mounds of stones almost everywhere, in monasteries, beside villages, crossing, along paths and on mountains. Some of the stones are inscribed with pictures or characters, with prayer flags stuck in the middle usually. Sometimes they are decorated with sheep and yak horns. They are Mani Stones used as the worship and rogation spots for the local Tibetans, especially villagers who have difficulty accessing to temples. Tibetan people build these unique works of art to show their piety to their deities and the Buddha's teachings.

Upon encountering a mani stone mound, Tibetan people circumambulate it clockwise as a prayer offering for health, peace, and protection. Some devout Tibetan will pick up a stone by the way and cling it to the forehead, while murmuring mantras at the same time. Then they will drop it into the mound. That equals to praying or murmuring sutra texts. Thus, the piles get into larger and larger massifs. The divine subjects such as heads, horns and wools of animals and even hairs of human can also be added to the mound. It is believed that the sincere wishes begged to the Buddha would come true one day by circumambulating the mound. 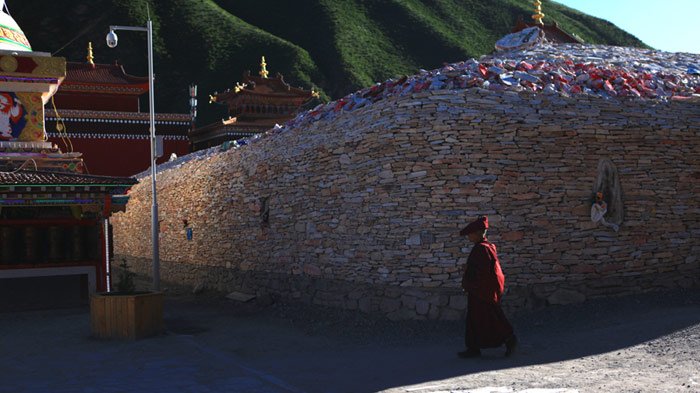 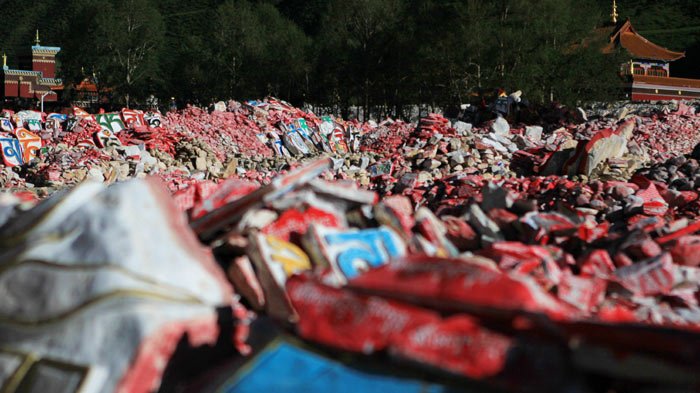 Mani stones are regarded sacred as the sacrifice to the Buddha. In Tibetan area, Mani stones in different colors, shapes with different images and texts engraved can be seen everywhere. They showcase the artistic charm of Tibetan culture. Mani stone is called Man Zha in Tibetan, meaning Sanskrit mandala. In the vast land of Tibet with sparse population, Mani stone mounds become the prayer halls and shrines for local Tibetans. 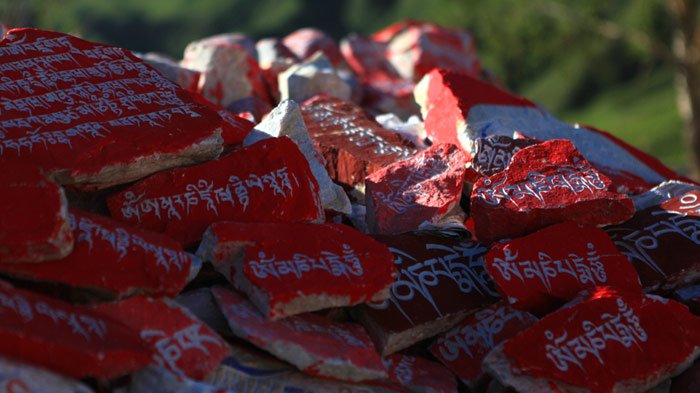 Another type of Mani Stone is the Mani Stone Wall inscribed with characters and pictures specially designed by the expert. The common designs are 'Om Mani Padme Hum' mantras, with images of deities, monsters, strong animals and other Buddhist themes decorated sometimes. These walls mainly stand near the temples, which illuminate their golden halls and stupas and add much holiness and blaze to the temples. The widely spread sculptures in Tibet are made in the form of shadow relievos. These include the sculptures in the steep cliffs in Lhasa, Shigatse and other areas. 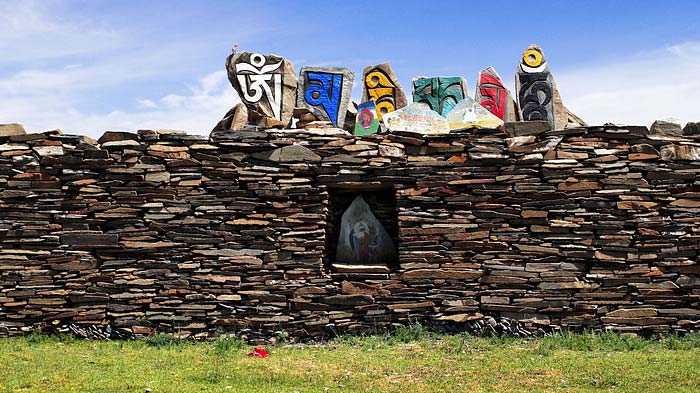 Nowadays Mani Stone has become a form of art in Tibet, and a group of specialists engaging in the sculpture has emerged as required. The Mani Stones are often considered as patron saints to be stored in the house or taken along when going out.

Mani Stone handicraftsmen are peasants or herdsmen in spring, summer and autumn. They only engrave stones in winter. Long ago, Buddha paintings, incantations and Buddhist mottos are the main content on those stones. Enlightened by pictorial sutras from other countries, mani carving with both inscriptions and images were also made for illiteracy folks. There are commonly two kinds of Mani mounds: one is piled by rocks of different sizes and the other is characterized by blocks and pebbles carved with inscriptions and sculptures, which are upbuilt in an undulating line.