One of the most important religious festivals in Tibet is the Tashilhunpo Monastery Festival, which is also known as the Buddha Exhibition Festival. A major festival in which one of the famous giant thangka paintings is unveiled for the devotees in the crowds of people that gather, it is an amazing festival full of awesome sights and sounds, and a great way to learn more about the Tibetan culture.

If you have the chance to travel to Tibet during the Tashilhunpo Monastery Festival, then you should not pass up that opportunity to see what is deemed to be one of the most stunning sights of the plateau. The festival is held on the 14th to 16th day of the fifth month in the Tibetan calendar, which is normally in around the end of June to the beginning of July. In 2023, the festival will be held from the 2nd to the 4th of July.

An important festival in Shigatse for more than 500 years, the festival consists of two days of celebrations and ceremonies, which bring in people from all across the prefecture to spend time doing what Tibetans love to do best, celebrating their faith. The tradition of unveiling thangkas at ceremonies developed from the traditions of early Buddhist paintings that survived in a few caves across China and India. These paintings were later done on cloth, usually, silk, using natural colors and pigments to make the vibrant pictures. 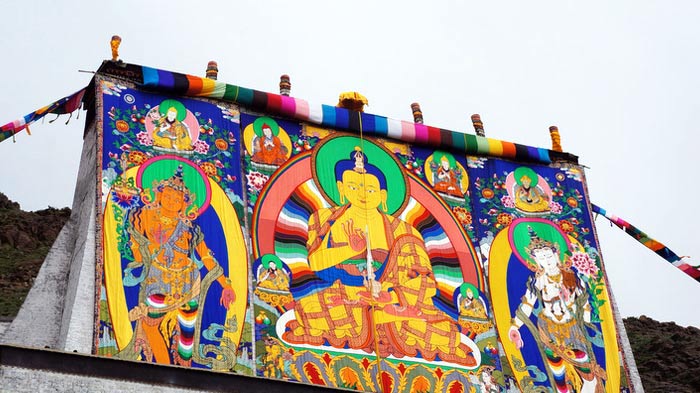 The huge Tibetan Thangka is unveiled at Tashilhunpo Monastery in Shigatse.

The word thangka actually means “thing that one unrolls”, hence the use of cloth for the thangka paintings and the fact that they are rolled up for storage until the next event. The thangka would originally serve as a teaching instrument for monks, and was mostly made on smaller pieces of cloth. The thangkas would depict images from the life of Buddha or one of the other famous Buddhist masters, as well as the Buddhist gods, and would be instrumental in teaching Buddhism to uneducated people and monks. The teachings would often include a ritual or ceremony, that would be used as a medium for people to offer prayers and thanks or make requests.

The event was first initiated in 1447 by the first Dalai Lama, Gedun Drupa, as a celebration of the completion of the monastery. The ceremonies were designed to bring a feeling of hope and happiness to the people of the area, and to thank the gods for the events of their past that led them to this point. When the monastery became the seat of the Panchen Lama, after the title of “Great Scholar” was endowed on the first Panchen Lama, Lobsang Chökyi Gyaltsen, who was the tutor of the fifth Dalai Lama, the ceremony became an instituted festival that was continued every year until the present day, even after the sacking of the monastery in 1791, following the invasion of Tibet by the Gorkha Kingdom from what is now western Nepal.

What to expect for Tashilhunpo Monastery Thangka Festival?

The festival is one where several thangka paintings are exhibited for the viewing of the people, who revere these ancient paintings in the same way they revere the statues of Buddha that can be found in monasteries and temples across the plateau. The first day of the festival sees the unveiling of the Buddha Amitabha, that is revealed to remind people to cherish their memories of the past. The Amitabha Buddha is believed to have been an intellectually advanced monk by the name of Dharmakara, who vowed to save all life on earth. He is said to have created the heavenly realm known as the Pure Land for the people that need his help to live in.

The second day sees the unveiling of the Sakyamuni Buddha, an image of Sakyamuni that is exhibited to remind people to pray for a life of joy and happiness. The thangka exhibited in the monastery was made by the ninth Panchen Lama. The Sakyamuni Buddha normally refers to Shakyamuni Gautama, the original Nepali prince who gave up his wealth and position to travel the world in search of enlightenment. Believed to have lived somewhere between the 6th and 4th centuries BC, he preached to all castes of people in India, and across the entire sub-continent, which broke the normal traditions, and raised opposition against him in India. Sakyamuni Buddha is generally regarded as the first and greatest of the Five Buddhas. 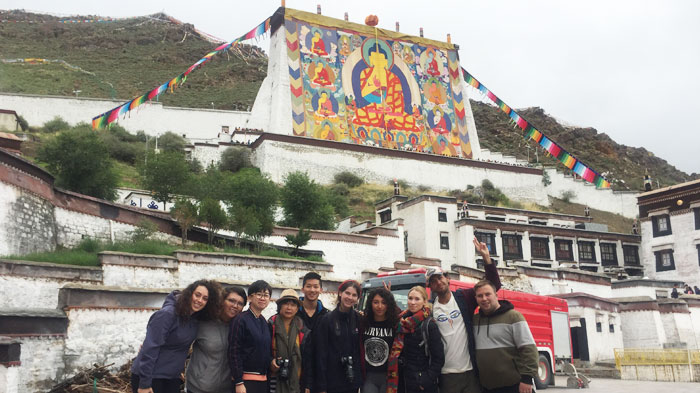 Our clients were appreciating the thangka painting in Tashilhunpo Monastery Festival.

On the third day, the image of the Maitreya, or Future Buddha, would be displayed for the people, to encourage them to have hope for the future. Known in Tibetan as BYams-Pa, the Maitreya Buddha is expected to come as the fifth and final Buddha to live on the earth and preach to the people. The Maitreya Buddha is said to live in the realm of the “fully-enlightened” gods, known as the Tusita heaven, and will wait for the decline of Buddhism and the collapse of the faith before coming to the world to save all the creatures of the earth. Buddhists believe that this date will come in around 30,000 years after the coming of the first Buddha, and many Tibetan Buddhists prepare for his coming.

Also on the third day, a huge thangka, standing more than four storeys tall, would be unveiled on the thangka wall behind the monastery. After the thangkas are rolled up and put away again for another year, the Buddhist Tibetans would make a circumambulation of the kora route around the Tashilhunpo Monastery, which lies against the Nyma Mountain, and sit together in the large square in front of the monastery to discuss their day and drink barley wine. Then the people begin the festive part of the celebrations, and the food and drink come out in abundance.

For visitors to the region, the festival is a unique chance to see Tibetan Buddhism at its best, in one of the most devout ceremonies on the plateau, the thangka unveiling ceremony. Few western visitors get the chance to see the stunning display of these amazing pieces of art, many of which are hundreds to thousands of years old. These giant thangkas are never kept on display, due to the delicate nature of the cloth and the painting, and are stored rolled up in a dry place within the monastery until the time of the ceremonies. As they are not the kind of thing that one can see when touring the Tashilhunpo Monastery during a normal visit, it is a great honor to be able to see them during the festival.

If you are planning a trip to Shigatse for the Tashilhunpo Monastery Thangka Festival, then you will need to plan your trip to coincide with the festival dates, normally 30 days in advance. The festival happens on the 14th to 16th day of the fifth month in the Tibetan calendar, which is normally in around the end of June to the beginning of July. Knowing the dates in advance is important to make sure that you can get to the festival. 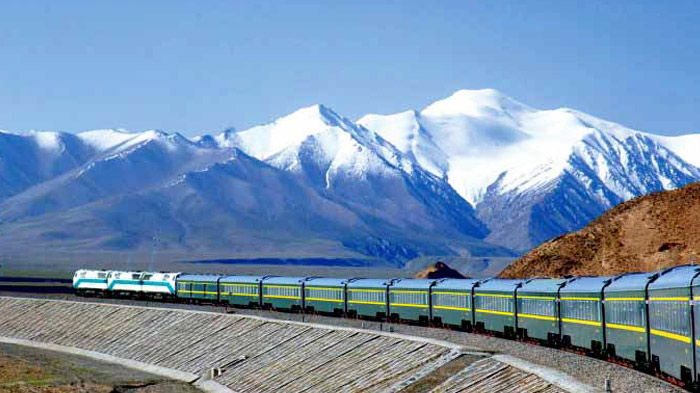 Enjoy the alpine scenery on the train from Lhasa to Shigatse

You should also think about giving yourself plenty of time to book the trip, as well as your transport to the plateau. June and July are part of the peak season for travel to Tibet for international tourists, and this can be a busy time of year. You should make sure that your tour is booked early enough so that you will not get disappointed by not being able to get the dates of travel that you want, either due to lack of spaces on the tours or the inability to get train or flight tickets to Tibet at the right time. Meanwhile, do properly arrange your travel time from Lhasa to Shigatse. Normally, you need to spend 3 days in Lhasa (3650m) for acclimatization before heading to Shigatse (3836m).

All of the festivals in Tibet are normally of a religious origin, and many of them have devout religious Buddhist ceremonies that are attached to the main festival. The ceremonies are always held at the start of the festivals, and are the main part of the celebrations, with the following games and feasts being the latter part of the day. Tibetans get up very early on festival days, and for the thangka unveilings like the ones during the Tashilhunpo Monastery Thangka Festival, will be standing to wait for the thangkas to be unveiled before the sun even comes up over the horizon.

It is considered to be good luck to be able to touch and pray at the hem of the giant thangkas, and the crowds of people arrive early to try and get a good position from where they will be able to touch the thangka and pray and throw hada, the long white scarves, onto the painting as a mark of respect and offering. Thousands of people attend the events at the Tashilhunpo Monastery on each of the days of the celebrations, and many of them travel for hundreds of kilometers just to be at the festival.

For tourists that are coming to the festival, it gives them a unique opportunity to experience the reality of Tibetan Buddhism practices first hand, and this kind of festival, with several thangkas and the devout religious ceremonies that go with it, is an amazing thing to experience, and one that could well change your life. It will definitely change the way you see the Tibetan people and their religious fervor, when you see how devoted they are to their religion, yet still manage to live a normal life, with the religion incorporated into their everyday lives.