King Gesar is a heroic epic created by the Tibetans from a collection of ancient legends, myths, verses, proverbs and various other folk cultures of Tibet. Originating via folk oral traditions, King Gesar was passed down from generation to generation orally in a combination of song and narration for over 1,000 years.

The Tibetan epic was formed between around 200 BC or 300 BC and 600 AD. In the later years, some folk balladeers continued to pass on the story orally; this enriched the plots and embellished the languages. The story had gradually become near perfect and very popular in the early 12th Century. The epic began to be compiled mainly by the monks of Nyingmapa (Red Sect of Tibetan Buddhism) in about the 11th Century, and were mainly hand-written books.

So far, King Gesar has been collected in more than 120 volumes, with more than one million verses (over 20 million words) - 25 times the length of the Western classic, Homer's Iliad. King Gesar, the greatest work of Tibetan literature, is easily the longest epic in the world, which has also appeared in ballads among the Mongols and Tus. The epic has been translated into languages of other brother nationalities of China as well as English, French, Russian, German, Indian and other foreign languages. It has now become a subject on study and is even discussed as a topic in the international seminar. 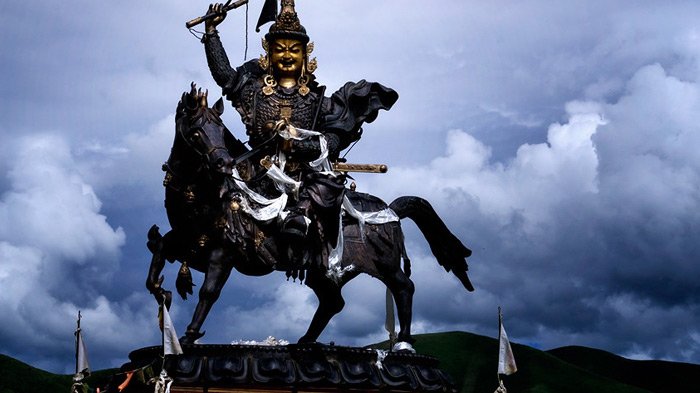 King Gesar of the Ling Kingdom

In Tibetan-inhabited areas Gesar was known as the king of the ancient Tibetan kingdom of the Ling. The great hero and his brave army are kept alive in the rich, imaginative retellings of the epic. From early times, the epic was passed on orally. Today, a small number of inscribed woodblocks of the epic can be found in Lhasa, Xigaze and Dege County in Sichuan Province; a few handwritten copies are also dispersed among some families. The Potala Palace contains a statue of Gesar, which still attracts pilgrims on a daily basis. Gesar's deeds were recorded in the Kangba region more than anywhere else, and handwritten and printed versions of Gesar from Dege are considered the most authoritative works. People still argue that the village of Ngaxu in Northern Dege County was the birthplace of Gesar.

King Gesar of the Ling Kingdom was born in the 11th century as the son of the supreme god Indira. As a boy, he was very mischievous, but divine by nature and full of supernatural powers. His greatest enemy was his uncle - a cowardly, vain and pretentious man who hoped to rule the country. Although the hero and his mother were banished, Gesar's exile enabled him to nurture his hidden strengths. He emerged victorious in a horse race to become king of the nation. King Gesar then began conquering the "kingdoms of demons" - the Jiang and Hor (northern Mongolian people) kingdoms. The war between the Ling and Hor kingdoms constituted one of the central parts of the story. It began with a beautiful girl, Qomu, who was King Gesar's queen. The Hor king, also known as the "White Tent King," heard about her beauty and sent for her. When his request was refused, he sent troops to attack the Ling kingdom. After several battles, another girl was sent to the Hor king in the place of Qomu. But once the truth was uncovered, the battles resumed. The Ling capital, along with Queen Qomu, was finally captured by Hor troops. But King Gesar organized all his troops with the help of an important Hor general, captured the Hor capital, killed the White Tent King and rescued his queen.

Gesar's image and story are immortalized in carvings, paintings, murals, woodcuts, embroideries, songs, dances and plays. Tibet has a research institute specializing in the study of the epic, whose research projects are listed as key State projects. Since 1979, the institute has collected more than 180 different song and narration versions of the epic, 55 woodblock, and mimeographed editions and has recorded 70 performances of the epic on more than 3,000 recording tapes. Since liberation, China's related research institutes have been working on this monumental portion of world literature by gathering, sorting, collecting, studying and publishing the material on a large scale.

By the means of the integration of romanticism and realism, the epic tells the story how the hero, King Gesar, conquers all the devils and brings happiness to the people with his perseverance and magic strength. The epic also expresses the theme of the people's wish for justice and bliss. The background of the story spans from the three periods of ancient Tibet: Clanship in the late Prehistoric Times, the Slavery Period, and Serfdom in the Feudal Society. The epic is really an encyclopedia of the social and historical changes, relationships among classes and nationalities, ethnical cultures and customs of Tibet.