Guozhuang means singing and dancing in a circle, homophonic with Guoxie in Tibetan language. It originated from the form by which Tibetans danced around a campfire, all the time. This dance has been with the Tibetan ethnic group throughout their history. 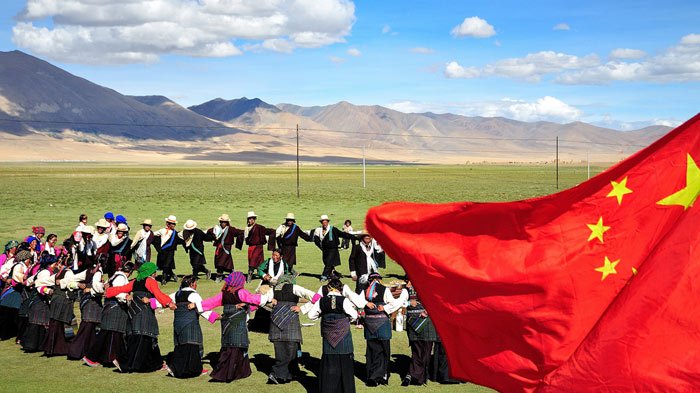 The Temple Guozhuang event is organized for religious purposes in temples or monasteries, or for greeting and sending-off the Living Buddha. It is solemn with strong religious implications, through which believers dance in honor of the Living Buddha, grateful for their expected bliss in their afterlife.
The Farm Guozhuang consists of two parts: singing, and quick singing and dancing. The tempo is subdivided into slow, medium and quick. At the beginning of a performance men and women stand in two separate circles and sing in rotation while swaying and stamping their feet. They conclude their singing by shouting "Ya!" Then their steps quicken and come to a stop at an exuberant allegro. The allegro music is often a condensed version of the slow music. The Farm Guozhuang is popular in Qamdo in eastern Tibet, while the Pastoral Guozhuang is popular in the vast pasture land of Damxung, Heihe and Sog Xian.
The form of pastoral Guozhuang is largely the same as farm Guozhuang, but there is a big difference in movement. In pastoral Guozhuang, for instance, the dancers jump while waving their hands in front of their chests and step forward, and then turn left or right, and their hands and feet move in the same direction. The sonorous singing produces a magnificent effect.

The movements of Guozhuang are agile and vigorous. The loose, wide trousers of the male dancers look like the feathered legs of eagles, and the men's movements are imitative of creatures, especially eagles, such as an eagle spreading its wings, hopping, and soaring. Women expose their right arms during dancing, with the right sleeve waggling behind. Moving around a circle, they sway their joined hands frontward and backward, keeping beats of their steps, until very late at night.