Tibetan Buddhism is considered a fancy form of the traditionally simple religion, with its brightly colored extravagant art and rituals. All of the colors used in Tibetan art and its rituals hold specific meanings. Then, what are the meanings of different colors in Tibetan Buddhism. There are five main colors that are known as pancha-varna in Sanskrit, which means The Five Pure Lights, according to Religion Facts. Each color represents a state of mind, a celestial Buddha, a body part, a part of the mantra word Hum or a natural element. 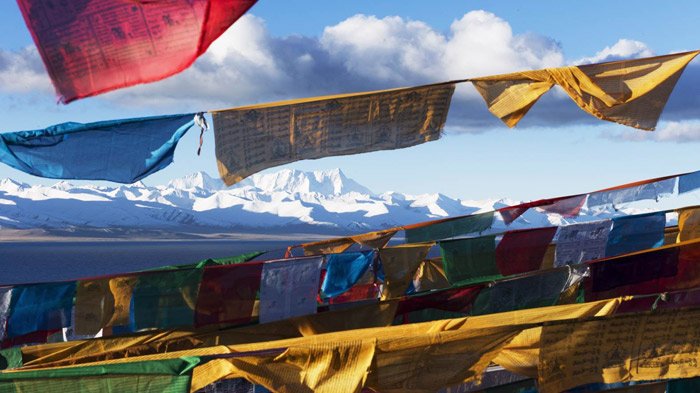 Blue is associated with purity and healing. Akshobhya is the Buddha of this color. Ears are the body part that is represented by the color blue. Air is the element that accompanies this color. It is believed, when meditating on this color, anger can be transformed into wisdom.

White is the color of learning and knowledge in Buddhism. It is represented by the Buddha Vairocana. The eyes are associated with white. White is in the elemental group water. If meditated upon, white can cut the delusion of ignorance and turn it into the wisdom of reality.

Red is related to life force and preservation. The Buddha Amitabha is depicted with a red body in Tibetan art. The part of the body associated with this color is the tongue. Fire is the natural element complementary to the color red. In Buddhism, meditating on the color red transforms the delusion of attachment into the wisdom of discernment.

Green is the color of balance and harmony. Amoghasiddhi is the Buddha of the color green. The head is the body part that is associated with this color. Green represents nature. Meditate on this color to transform jealousy into the wisdom of accomplishment.

Yellow symbolizes rootedness and renunciation. Buddha Ratnasambhava is associated with yellow. The nose is represented by this color. Earth is the element that accompanies the color yellow. Yellow transforms pride into wisdom of sameness when visualized in meditation.

These Five Pure Lights are often seen in Mandala and Tibetan Buddhist prayer flags and mani stones at mountaintop which you can see everywhere as you enjoy your Tibet tour. The colors may vary, but there is always a set of five.

It is believed that by meditating on the individual colors, which contain their respective essences and are associated with a particular Buddha or Bodhisattva, spiritual transformations can be achieved. 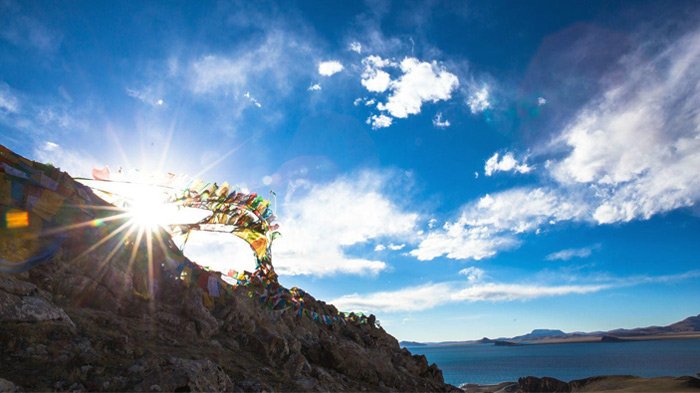 Colorful prayer flags are a unique and frequently-seen sight in Tibet Autonomous Regions in China and neighboring countries like Nepal, Bhutan and Kashmir, etc. On these flags are densely-inscribed Tibetan Buddhist mantras, image of Tibetan Buddhas and auspicious creatures or gods. And they are often seen hanging on the mountaintop, branches, mountain passes, bridges, etc.

As a symbolic object to spread good fortune, peace, sympathy and wisdom to human beings, prayer flags bear a fixed color pattern and order which can’t not be altered randomly. And normally a string of prayer flags consists of 5 colors:

On the top is blue flag, which symbolizes blue sky; Next comes white flag and it stands for white clouds; Following white flag is the red flag and it is the color of flame; The last but one is green and it shows green river; The bottom is yellow which represents earth.These 5 colors mirror the 5 natural phenomena of our world and each is closely-connected and indispensable. To some extent, it also shows Tibetans’ longing for peaceful and happy life.

Why Red and Yellow Are Preferred in Tibetan Buddhism

Traveling in Tibet, hardly can you find red and yellow colors for ornament of ordinary Tibetans’ houses. While as you tour Tibetan monasteries, these two colors are widely used and the red or yellow are also considered to be orthodox for Tibetan monks’ clothing.

Red Color and Tibetan Buddhism
No one knows for sure why red color is preferred by Tibetans. However, two explanations are generally accepted. First one is that as the early Tibetans are entirely nomads and generally adapt themselves to both nomadic and farming life, the meat (yak, sheep, etc.) they eat are known to be red. As time goes time, the red color becomes one of their favored colors.

Another belief has something to do with religion. Bon Religion, an ancient Tibetan religion, believes that the universe is made up of three realms, i.e. God, Mankind, and Ghost. To shield from ghost’ harassment or evil spirits, Tibetans apply red mineral substance on their face. Such religious tradition is still kept yet with a fine twist. Instead of be spread on one’s face, red color is painted on the wall of holy Buddhist halls that houses the tombs of prominent monks (such as Dalai Lama or Panchen Lama, etc.) A good case in point is the red palace of Potala Palace which protects the tombs of successive Dalai Lamas.

Yellow Color and Tibetan Buddhism
A number of yellow temples, nunneries or meditation halls can also be found in Tibet. The earliest yellow architecture dates back to the “ Buzi Golden Palace”, built by Songtsen Gampo in Samye Monastery. It’s has been a tradition that only the prestigious monasteries or residence of eminent monks can be coated with yellow color. Therefore, you can find yellow on Qangba Buddha hall of Drepung Monastery, main building of Mindrolling Monastery, etc.

Tips: To ordinary people, their house are painted white to express their reverence for holiness of gods as well as an effective way to prevent strong ultraviolent radiation on the plateau. 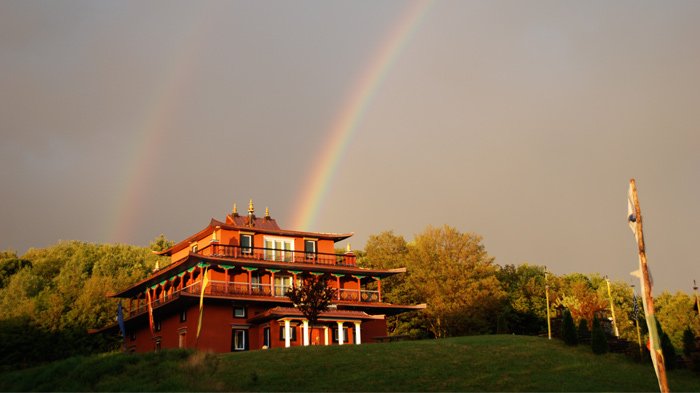 Rainbow appears over a Tibetan Monastery after sudden rain. (photo by padmasambhava.org)

In addition, there is the Buddhist concept of the "rainbow body”. The rainbow body is a concept in Tibetan Buddhism when everything begins to transform into pure light. It is said to be the highest state attainable in the realm of samsara before the "clear light" of Nirvana.

As the spectrum contains within itself all possible manifestations of light, and thus of color, the rainbow body signifies the awakening of the inner self to the complete reservoir of terrestrial knowledge that it is possible to access before stepping over the threshold to the state of Nirvana. Understandably, when depicted in the visual arts, due to the profusion of colors, the result is spectacularly unique.

0 Comment ON "Meanings of Different Colors in Tibetan Buddhism"