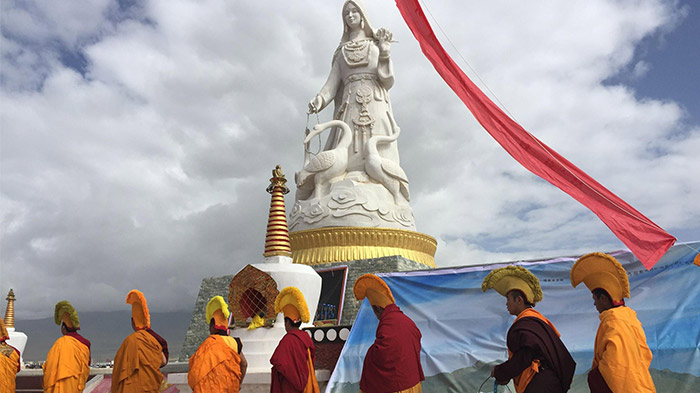 This is the most fundamental teaching of Buddhism and is found across every single sect of Buddhism. These teachings were the first teachings taught by Sakyamuni Buddha when he attained enlightenment and form the crux of the rest of Buddhist philosophy.

1.Right View - Knowledge and acceptance of the Four Noble Truths (above-mentioned).
2.Right Thought- The thought of having good-will, renunciation, and non-violence.
3.Right Speech - Refraining from false, or malicious, or Idle, or rough speech.
4.Right Action - Refraining from killing living beings, stealing, and sexual misconduct.
5.Right Livelihood - Refraining from engaging in livelihoods which harm oneself or others.
6.Right Endeavour - One makes an effort to improve their mind or action when an unwholesome thought arises or action is done.
7.Right Mindfulness - Contemplation of the nature of the body, mind, feelings, and other phenomena. The nature according to Tibetan Buddhism is that everything is inherently empty and transient.
8.Right Concentration - Concentrating the mind on meditative states, and on the practise to end suffering.

What is Karma in Tibetan Buddhism?

Karma is a Sanskrit word which means action. The concept of Karma is very important in Buddhism. Contrary to popular belief, Karma is not only cause and effect or consequence. It also basically means the action every being does at every moment. This in turn sets a chain of events in motion where every action has a result. Some types of actions have immediate results, and other types of actions have results which appear much later (maybe years or even lifetimes later). Buddhists believe that doing wholesome deeds and thinking wholesome thoughts is good Karma or good action which will have benefits later. The good deeds will give rise to a positive mentality which in turn will affect the lives and future lives of the doer.

What is Reincarnation in Tibetan Buddhism?

Buddhists also believe in rebirth and reincarnation. This is a particularly strong  belief in Tibetan Buddhism. It is believed that beings are born on different realms of existence like animal realm, human realm, godly realm, ghost realm, etc depending on the Karma committed in different lives. If you do bad karma, then your rebirth will be in a low realm befitting your actions until you use up the consequences of that action. Alternatively, if you do good Karma, your birth will be in a favourable realm where you will enjoy a good life until the fruits of your action are used up. Beings take birth after birth in different planes of existence depending on their karma until they attain enlightenment after which they will have no more rebirth.

The concept of reincarnation on the other hand is slightly different. A reincarnate is called a Tulku in Tibetan Buddhism. Reincarnation is also a form of rebirth but there is a fundamental difference between them. Rebirth is an involuntary process which is due to one's karma. Reincarnation on the other hand is a voluntary process, not dependent on Karma, where the Tulku chooses to be born again. The Tulku will choose where and when to reincarnate. An examples of famous Tulkus who have chosen to reincarnate are the Dalai Lama, Karmapa, Panchen Lama, etc. It is believed that this happens through the power of the Tulku’s compassion and prayer. The purpose of reincarnation is to keep coming back to lead all sentient beings into enlightenment. Thus, by coming back the Tulku delays his/her own enlightenment for the benefit of other beings. The new Tulku is identified using a series of visions, dreams, divination, consulting of oracles, and sometimes the Lama before he dies gives instructions for where he will reincarnate. This is something that can be done only by the monks specified by the Lama and cannot be done by any government agency or external force.

Bodhisattva Concept of Tibetan Buddhism and Its Roles

Lama is a Tibetan word meaning chief or high-priest, and it is a title given to the teachers of Tibetan Buddhism (Dharma). Tibetan Buddhism is sometimes called Lamaism, although this is not entirely accurate. But the concept of Lama is quite unique to Tibetan Buddhism. Lamas are generally thought of as guide and teachers in the path to Dharma. In Tantric practises of Buddhism, they may appear alongside the principal deity of the practitioner (called Yidam), alongside other tantric guides such as Dakinis (female tantric guides or goddesses), and other Buddhist deities. Traditionally the title Lama was conferred only upon those Buddhist masters who had some level of spiritual attainment or enlightenment. These days Lama is used to refer to almost all monks, and sometimes even nuns. 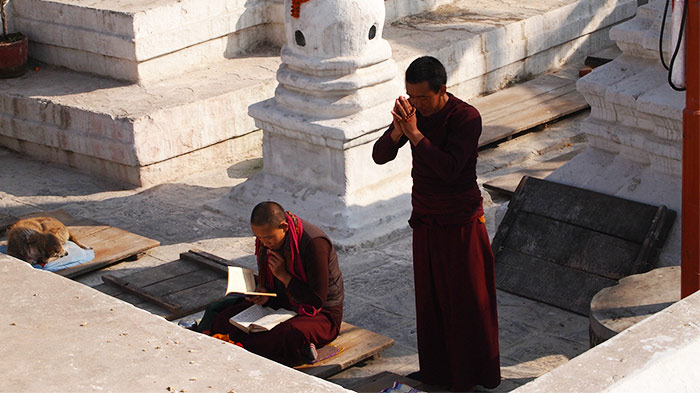 Some monks who are reincarnate Tulkus may have Lama attached to their names as a title. An example of this would be the Dalai Lama, Panchen Lama, etc. The​ Lama tradition is almost synonymous​with Tibetan Buddhism. It had its roots in Bon traditions but was merged into Tibetan Buddhism when Buddhist masters began coming into Tibet.

Mantra is a Sanskrit word which roughly means a set of syllables or words that are changed repetitively. Mantras have deep philosophical meanings and are used in many different practises in Tibetan Buddhism. At its most basic level a mantra is used as a form of meditation. Mantras are said to represent enlightenment. Mantras in Tibetan Buddhist practise is often associated with a deity. For example, the mantra “Om Mani Padme Hum” is associated with Chenrezig (the Bodhisattva of compassion). 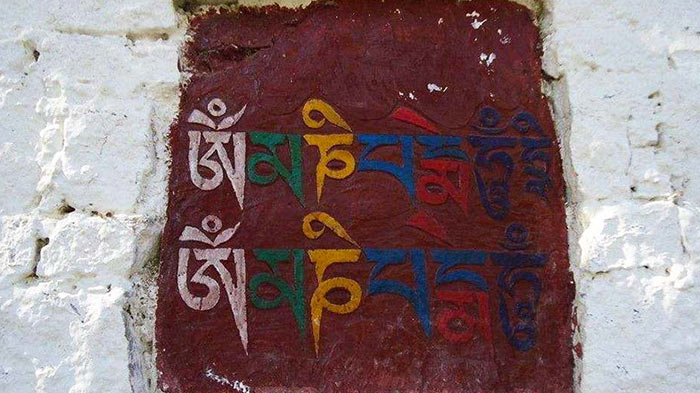 Meditation is something that is very intrinsic and an essential part of Buddhism in general. Thus it is no surprise that Tibetan Buddhism has a rich tradition of meditation. There are so many meditation techniques in Tibetan Buddhism that one article would not suffice to discuss them. This article will briefly explain about meditation. Buddhist meditation can be narrowed down to two main types - Analytical and Concentrative. 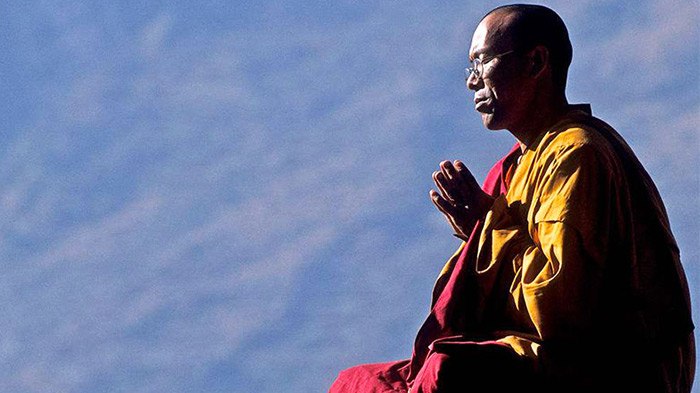 The first category of meditation is Analytical meditation. This includes techniques mentioned in texts such as Lam Rim (Gradual path to enlightenment), applying logic to examine parts of the identity, consciousness, mind, etc.

Mandalas are spiritual and ritual symbols which represent the entire cosmos. Mandalas are generally made by skilled, trained monks and they use coloured sand to create the mandalas. Mandalas take weeks to make and involve a group effort by different monks. There are special rituals conducted before, during, and after the mandala construction. 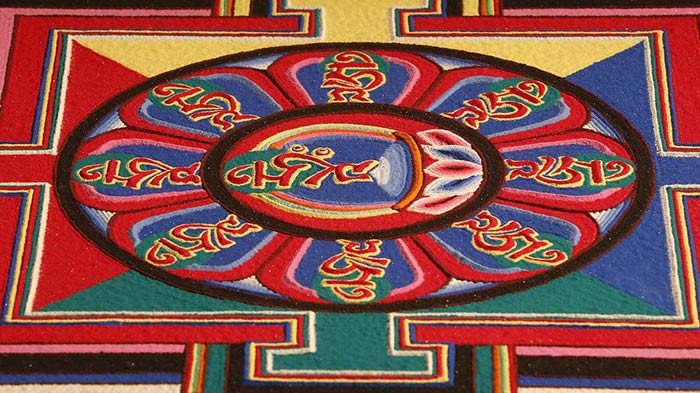 Mandalas also represent the concept of Samsara or cyclic existence (birth, death, and rebirth). Images of Buddhas, animals, skulls, and fire are common symbolisms in mandalas. These represent enlightenment, rebirth in lower worlds, death, etc. Mandalas also represent impermanence, an important aspect of Buddhist philosophy. After the painstaking work involved in constructing a mandala, it is destroyed in one sweep by a broom. This is to represent the impermanence of all phenomenon. Also mandalas are used as meditation aids in Tantric practises, where the practitioner contemplates the mandala as a visual guide and as a representation of enlightenment.

Tibetan Buddhism is rich in deep philosophy, cultural traditions, and rituals. For someone looking from an outsider’s perspective it can seem confusing and even primitive. But it is far from any of that. Tibetan Buddhism has deep, logical philosophies on life, death, rebirth, and existence. Most of these insights are derived from the rich meditation and contemplation culture in Buddhist practise. To fully enjoy the aspects of Tibetan Buddhism, a background knowledge as well as an open mind is necessary.