Sand Mandala in Tibet and Its Profound Philosophy

Tibet is known for its colourful artwork involving Buddhist deities, Buddha figures and aspects of Buddhist philosophy. Anyone who is even remotely familiar with Tibetan culture will be familiar with one particular type of artwork- the Sand Mandala. A mandala is basically a spiritual symbol depicting the universe and the cosmos. It is generally a geometric pattern which represents the universe metaphorically. 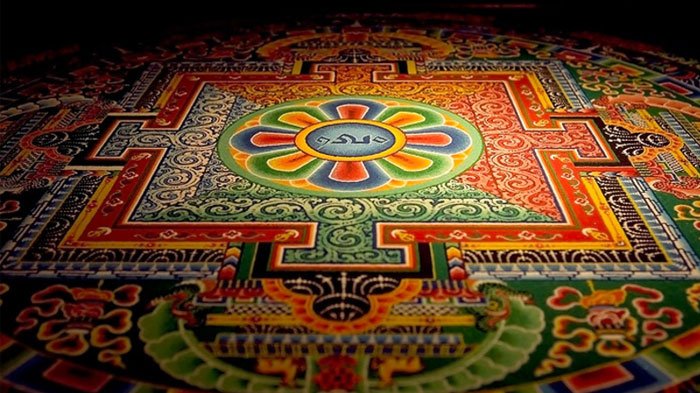 Mandalas are very common in Tibetan culture where they represent various philosophies found in Tibetan Buddhism like the structure of the Universe, Wisdom and Impermanence, Nature of Enlightenment, etc. Tibetan Mandalas are always made using coloured sand hence the name the Sand Mandala. For a traveller visiting Tibet for the first time, understanding the significance and philosophy of Sand Mandalas will make the experience of seeing one in reality a profound one.

Sand Mandalas or Dul-Tson-Kyil-Khor (Mandala of coloured powders) as they are known in Tibetan, is an ancient art form of Tibetan Buddhism. Tibetan Buddhism has many colourful art forms like painting Thangkas, Butter sculptures and Sand Mandalas. Like all the other art forms of Tibet, the sand mandala is associated with Buddhist culture and Buddhist philosophy. 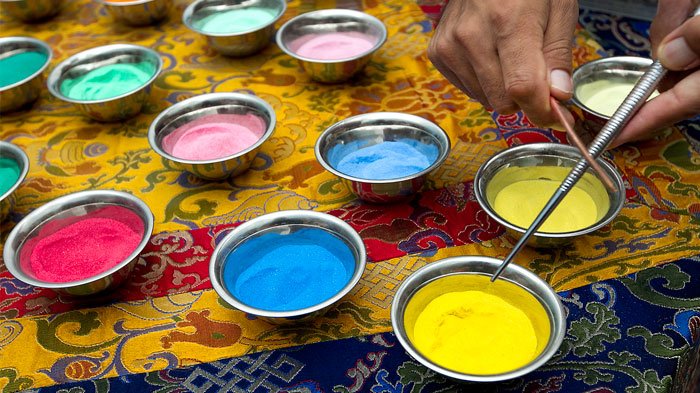 Sand Mandalas have been in the Tibetan art culture for centuries. In the olden days, monks would use precious and semi-precious stones in place of coloured sand. Nowadays using gemstones is not practical so monks use dyed sand. The sand in usually very dense so it doesn’t easily scatter if there is a wind or some disturbance while the mandala is being made. 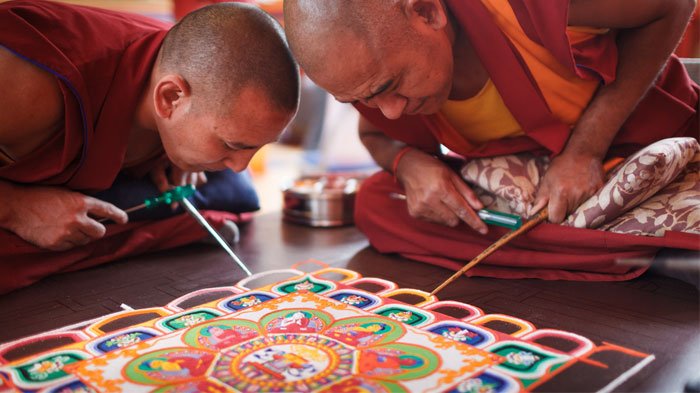 First the monks draw the basic design of the mandala on a flat board. Then they start filling in the outline with the coloured sand. Usually they start at the centre and work outwards. Creating a mandala involves a lot of cooperation and the aim is to maintain harmony throughout the entire process. Completion of a mandala can take several weeks, which is why it is a group effort by the monks. It is generally a very meditative process for monks due to the intense concentration involved.

The mandala starts with a dot in the centre which represents the primary deity of the mandala. At this dot, the image of the deity is drawn. Work on the mandala is started first by holding a few ceremonies. Outsiders are rarely permitted to view the beginning ceremonies, which involve dancing, chanting and prayers. Once these ceremonies are over, work on the mandala begins. 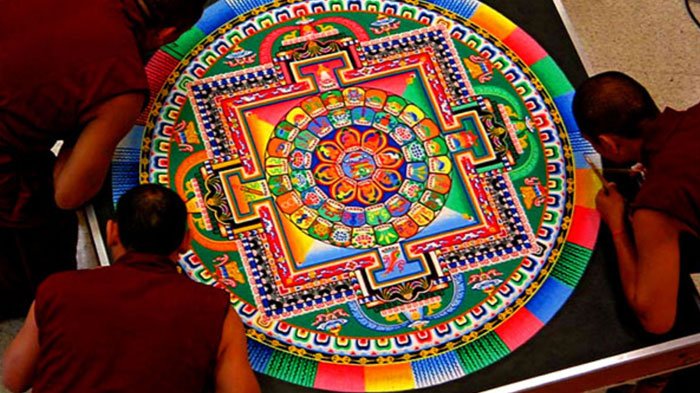 The sand mandalas are done by skilled professionals, who are always monks. These monks are trained in this art form for many years before they are allowed to create them in public. They are trained in the very specific rules of mandala design and its philosophy. Training can go to more than three years. Mandalas are created using the rules given out in various Tibetan esoteric texts. There are specific rules for different types of mandalas. 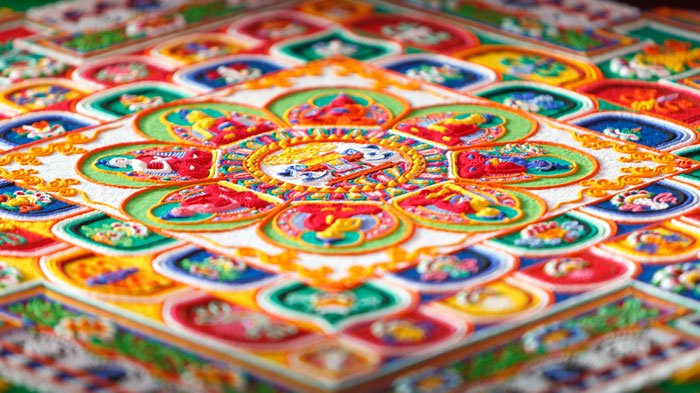 Each mandala will vary in its colour, shape, size and design depending on the lesson it aims to teach. Creating a mandala involves enormous patience, perseverance and willpower. It is a painstaking work that produces breathtaking results at the end. What is even more awesome is that after all this work is finished and the traditional ceremonies associated with it are over, the mandala is destroyed by being swept aside. The significance of this will be explained further in this article.

The mandala is steeped in symbolism and philosophy. Before a monk ever makes any mandala, he is first educated in the philosophy behind it. Since a mandala is so rich in symbolism, the very act of creating the mandala is believed to be sacred. On the whole a mandala usually represents the universe. It can also represent various other things like the Enlightened mind, Wisdom and Impermanence, etc. 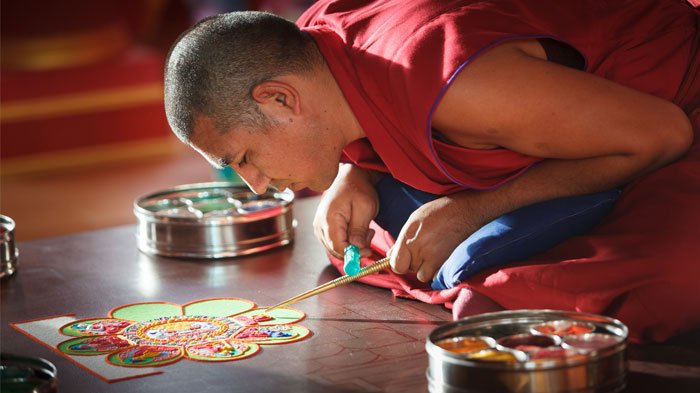 Generally a mandala is represented in the form of a palace. In the middle of the mandala palace is where the Buddha essence lies. Surrounding him are the four “gates”, which form a square. They in turn represent the four directions as well as the four immeasurables of Buddhism, which are loving-kindness, compassion, altruistic joy and equanimity. 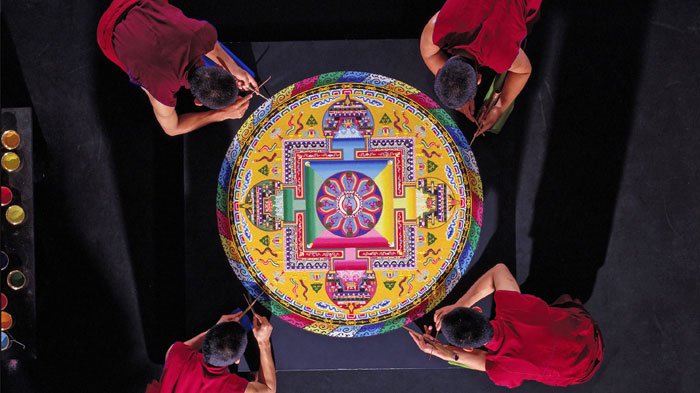 In each of the directions is a Buddha called a Dhyani Buddha. While these Buddhas are usually the same colour, they can be distinguished by their hand gestures. They each represent overcoming a particular defilement like ignorance or anger or lust. Outside this are generally concentric circles which also have deep meanings. The outermost ring is usually drawn as a ring of fire. This denotes the burning of ignorance. The mandala is technically a representation of the enlightened mind. So an outer circle showing a ring of fire means the first step towards enlightenment would be the burning away of ignorance. It also symbolizes the transformations that humans must go through to reach enlightenment.

The next circle is depicted by thunderbolts and diamond scepters. This is linked to the Tibetan tradition itself which is called Vajrayana or Diamond Vehicle Buddhism. It represents illuminity and indestructibility of the the ultimate truth of the Buddha’s teachings. 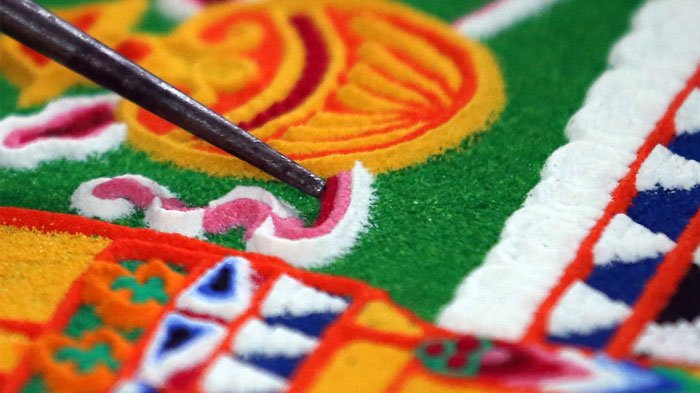 The inner two layers depict eight graveyards and finally lotus leaves. These represent the eight aspects of human consciousness that bind a person to the cycle of rebirth and religious rebirth, respectively. After that is the square “palace”, the meaning of which has been discussed earlier.

The mandala represents the human journey from ignorance to Buddhahood. One interesting thing about the process of mandala making is that, after the mandala is completed, the accompanying ceremonies and public viewing is over, the mandala is destroyed in one swift sweep. This represents the ultimate impermanence of all conditioned things. The sand is then swept into the rivers where it is believed that the river waters will carry the blessed sand far and wide.

Mandala making is very important in Tibetan Buddhism and it is heavily laden with symbolism and deep philosophy. Sand mandalas are beautiful, colourful and a definite treat to the eyes of those seeing them.

0 Comment ON "Sand Mandala in Tibet and Its Profound Philosophy"