As the home of the capitals of the ancient Xiangxiong and Guge kingdoms, the vast stretches of the Ngari Prefecture is also the birthplace of the Bon Religion. Buddhism was passed on to hinterland Tibet via this plateau as well. During their long history, ancestors of the Tibetan ethnic group created a splendid culture and left the Ngari Plateau numerous historical treasures, including Donggar frescos and Rutog rock paintings. Donggar frescos are a recent and important archaeological discovery made by cultural heritage departments in Tibet. They are yet another form of China's cave art, and provide the missing link on the subject of ancient Buddhist cave art in western Tibet. The frescoes also provide important material for studying the history of the well-known Guge Kingdom.

Donggar, located in Zhada County, is a small village with only a dozen households. It is about 40 kilometers northwest of the ruins of the Guge Kingdom. The county is built at the foot of a mountain, neat the river. Many important archeological discoveries are found here, for instance, two grottos were unearthed here. One was discovered on the cliff near the Donggar Village, and the other, in the neighboring Piyang Village. The two are the largest Buddhist caves in Tibet at the moment. 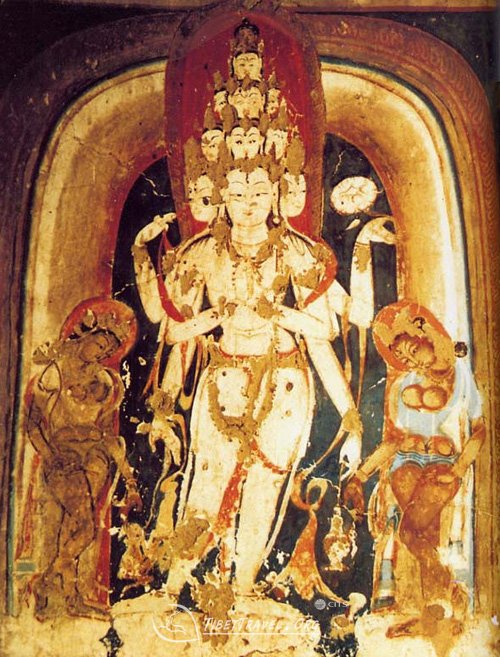 Donggar frescos are housed in three caves. The caves are located half way up the mountain. Since no records are left, the numerous Tibetan historic, religious and cultural files remain a cultural mystery. What we only know is that the grotto frescos are over 1,000-year old. The archaeological and research value of it is definite.

These frescos are of high craftsmanship. They were well knitted with smooth, easy lines, using bright colors and unique designs. The contents include exotic figures, patterns and designs. What is amazing is that the frescos still appear new after so long a time. People think the special mineral dye it uses is the key. 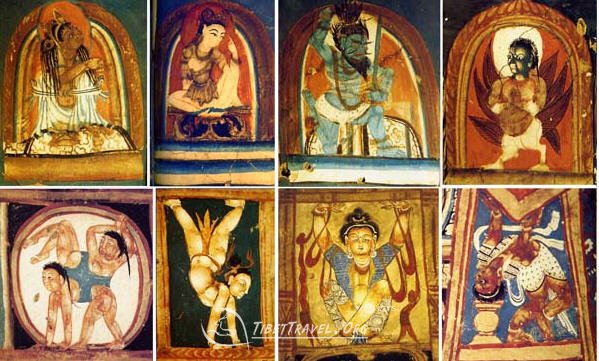 Figures of Buddha are the main images of the frescos. There are also images of Bodhisattvas, protectors of Dharma, and men with unnatural strength. The frescos also depict legendary stories about Buddhism. We can also find pictures expounding on Buddhist texts, and pictures of people worshipping Buddha. Other images include various decorations like peacocks, dragon fish, twin dragons, two phoenixes standing opposite each other, and the Tantric Mandala. There are foreign animals in the frescos, like the dragon, phoenix, lion, horse, sheep, cattle, wild goose, duck and elephant. The most common images are heavenly girls. 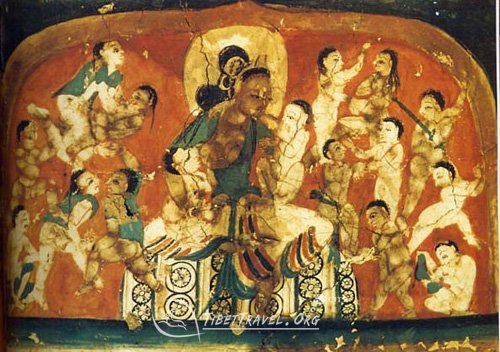 The universe described in the Donggar frescos is both colorful and figurative. Preliminary investigation indicates different types of cave groups. There are caves for worshipping Buddha, caves for monks and caves for the storage of sundry objects. In the caves for worshipping Buddha we can find the most exquisite and marvelous frescos. In order to protect these precious frescos, public are not allowed to get close to the frescos.