As the rainy season comes to an end and the temperatures begin to cool down, the cloudy days begin to clear away, and the bright sunshine once more takes precedent in the plateau skies. On average, temperatures across Tibet range from around 7 degrees to as high as 21 degrees in September, with less rainfall and higher humidity. In the Tibetan capital, the temperatures have dropped a little, ranging from 6-8 degrees at night to around 20 degrees during the day, with fewer days of rain in the evenings. 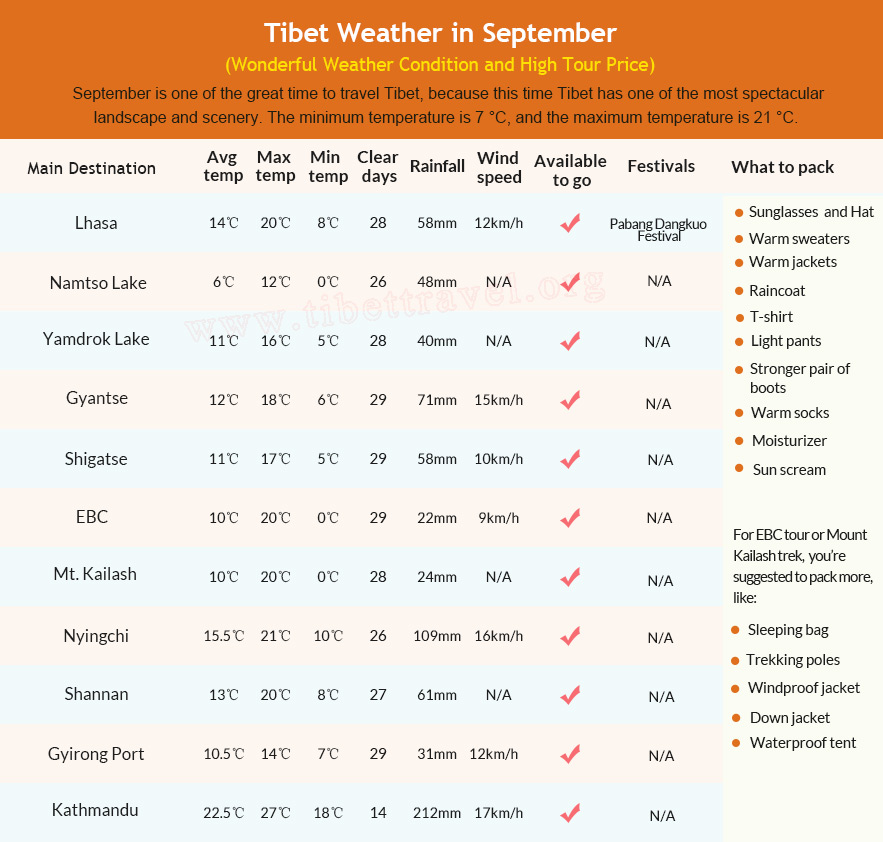 September is the last of the summer peak season months, and a great time to visit Tibet. As well as being one of the best times to visit the world’s highest mountain, Mount Everest, it is the resumption of the trekking seasons, and the start of the period when Tibet has one of its most spectacular landscapes and scenery. The weather in Tibet is still warm, though starting to cool down, and the rains are beginning to lessen, ready for the drier autumn season at the end of the month. Skies are bluer and clearer than in the peak monsoon season, and the clearer skies make the temperature fell higher than it really is. And, once again, those sweaters will need to come out as the evenings begin to get colder.

As a whole, September is one of the best months for travel to Lhasa. While the weather is beginning to cool down, the dry air is starting to come in, and the rains have dropped drastically, with more sunny days in the month than rainy ones. The warm weather feels even warmer because of the reduced oxygen content, and sun cream is still necessary throughout the month.

September is the start of the autumn season at Lake Namtso, and temperature begin to drop as the year heads towards its end. However, the decline in temperature is not yet noticeable, and the rains have almost gone, making it the ideal month to take a trek along the lakeshore and explore the stunning Tashi Dor Monastery and surrounding area.

September is only a little colder than August, though with less rain, and the landscape around the Yamdrok lake is still lush and green. The summer birds are prevalent on Bird Island, which makes September another good time to go bird watching at Lake Yamdrok, before they head off south at the end of October. 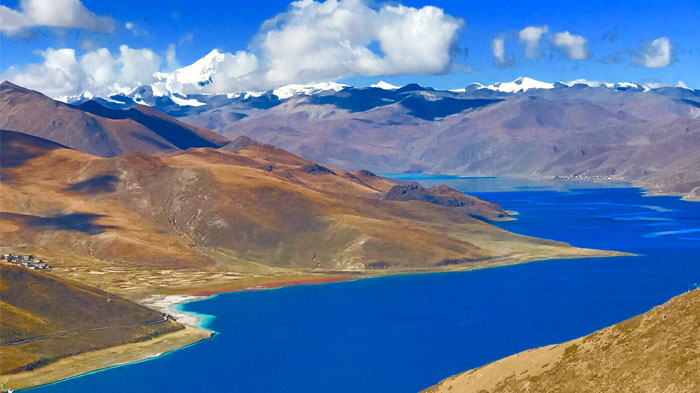 You can capture the best vista of the holy Yamdrok Lake in September.

September comes and the rains start to die off, leaving Gyantse with lush green landscapes and warm weather for the last of the summer months. With more than 25 clear days throughout the month, it is an ideal time to explore the monastery and sights of the county, and there is less chance of getting wet while touring.

September, and the rains are dying off, leaving Shigatse a little drier and more pleasant in which to travel. Temperatures are not too cold either, with daily highs of around 17 degrees, and dropping only to around 5 degrees at night.

Finally, the rains of the monsoon have abated and the summit of the world’s highest mountain is once more visible, as the clouds have sped away to the south. The base camp is still warm, with highs of around 20 degrees, and the stunning scenery of the area, despite being a little arid still, is awe-inspiring, set against the backdrop of Mount Qomolangma.

>> Click here to know more about Everest Base Camp tour 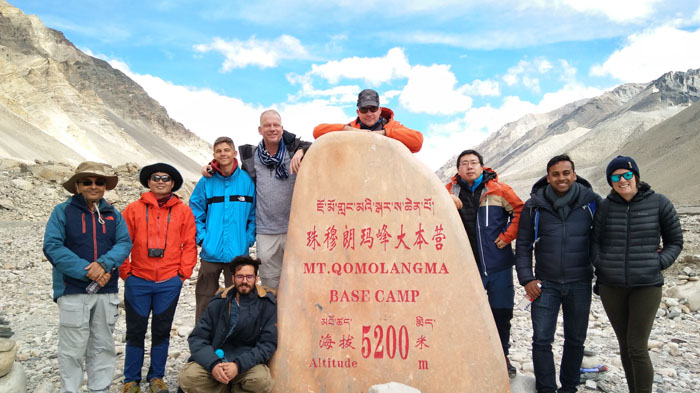 September is one of the best time to visit the imposing Mt.Everest in Tibet.

September is the best time to trek Mount Kailash. Temperatures are warm and comfortable, though it can get as low as 0 degrees at night, so warm jackets are a good idea.

Another of the great times for trekking in Nyingchi, September sees a reduction in the amount of rainfall, and the major trekking routes such as the Namcha Barwa Mountain Base Camp trek, Holy Lake Nalatso trek, and Yarlung Zangbo Grand Canyon trek become even more popular. September is also harvest time in Nyingchi, and the villages hold their festivals in the hopes of a bumper harvest.

As the summer draws to an end and the autumn season takes over, Lhokha becomes a little cooler and a lot drier, and September is one of the best times to visit the area of the Yarlung Zangbo River Valley. As autumn begins, the strong winds dissipate, and the area changes to a less subtropical climate, ready for the northeast monsoon season. Daytime temperatures are still warm enough to explore the area, though, and the Yumbulakang Palace is stunning as he leaves begin to turn brown. 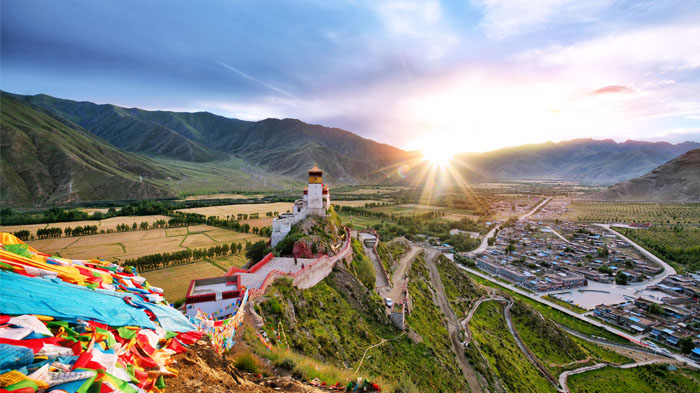 Bathing in the sunshine, Yumbulakang Palace shows its unique charm in September.

Lhasa to Kathmandu Overland in September

Rains in the Kathmandu Valley have decreased more, and the area is getting drier with bright sunshine for around half the days in the month. Gyirong is still pleasant, and the lush green Gyirong Valley is one of the most beautiful sights of the trip across the plateau from Lhasa.

The Tibetan Bathing Festival is one of the most important times of the year for Tibetan Buddhists, as it is a time when they can cleanse the body and soul of all ailments and illness, allowing them to be more pure in their thoughts and devotions. The festival usually starts in the first week of September, and lasts for around a week, and is known in Tibetan as Gamariji, which means “Venus”. 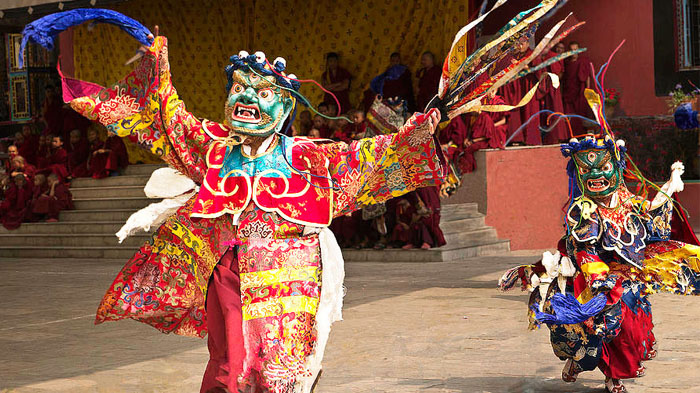 You can appreciate Tibetan Buddhist dances during Pabang Dangkuo Festival in September.

The Pabang Dangkuo Festival, which is held at the Reting Monastery to the north of Lhasa, is an important festival in the area, and the festival is a purely religious prayer event, which has evolved into a more varied festival with entertainments and markets over the centuries. Pabang means “big stones”, while Dang means “glass lawn”, and the Pabang Dang is a holy place located to the side of the monastery, which lies in Tangguo Village in Linzhou County, around 240 kilometers to the north of the Tibetan capital.

What to pack for traveling Tibet in September?

September is a little like May in Tibet, with little rain, cooling temperatures, and generally dry weather. While you can travel in light pants and t-shirts around most of Tibet still, there are evenings and nights that can get colder now, so a couple of warmer sweaters are useful to have around, or a light warm jacket. As always, good boots for the rough and rocky landscape is a must, and the need for warm socks is starting to come back again. And it is useful to have that light raincoat to hand, just in case you get caught in a shower.

As with most of the year in Tibet, the sun is bright and strong, and while the air is a little thicker, the rays can still cause sunstroke and sunburn, so sun block and a good hat are essentials, as are sunglasses. The winds are getting up again, so bring lip balm and moisturizer to protect you face and lips from the chilly breeze. If you are planning Tibet trekking tour, then bring layers to moderate your temperature between warm and cool, as the temperature changes from night into day can get a little colder. And if you are camping along the trek, a good warm sleeping bag and waterproof tent will be necessary. While the land is drying, it can still be slippery in places, as well as rocky along the trails, so trekking poles are very useful when trekking in high altitudes.

September is really the last month when you will find much rain at all in Tibet, and even then, there is already very little, especially in the west of the region. Temperatures will begin to fall, and by the end of the month, can get much colder, as the autumn comes in and the leaves begin to turn brown. From here on, the weather starts to get colder, the landscape and scenery changes dramatically, and the Tibetan experience takes on a different turn for the rest of the year. Enjoying the tail end of summer is what September is all about, and this last summer month is one of the most beautiful times of year. 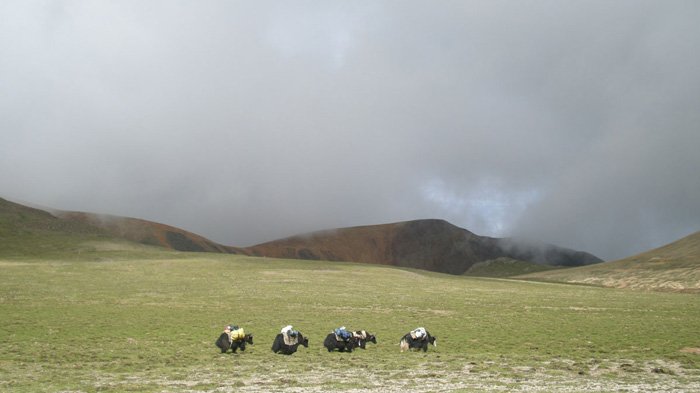 September is one of the best time to travel in Tibet. 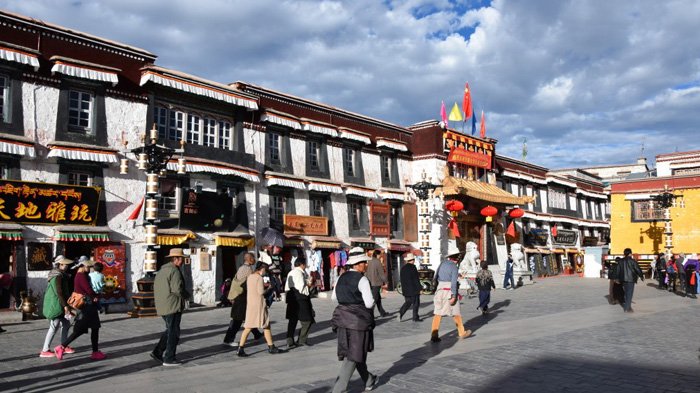 Tibetans and tourists makes Barkhor Street getting bustling in September. 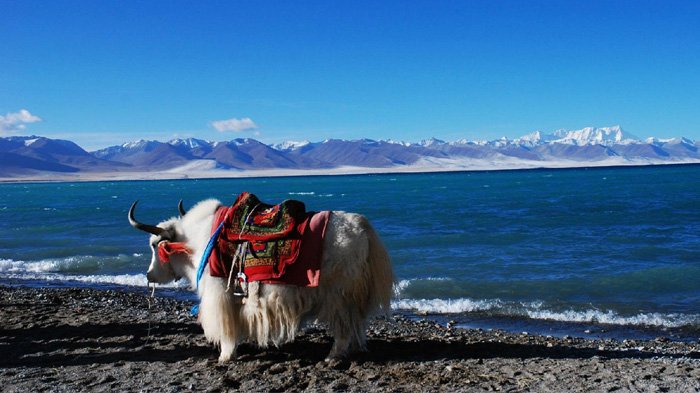 The white yak and Namtso Lake enhance each other's beauty in September. 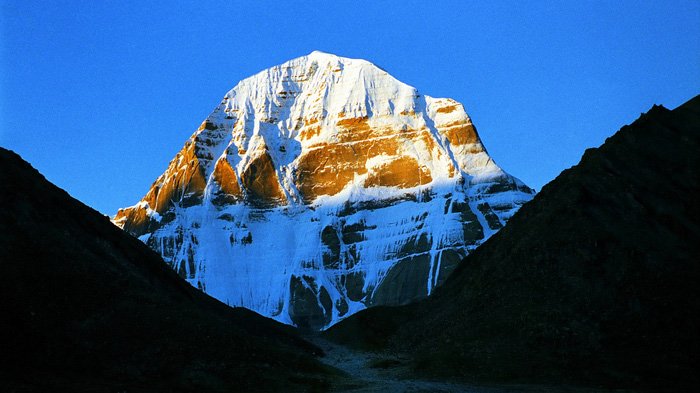 The stunning view of Mount Kailash at twilight in September.