Tibet Weather in October: Tibet temperature and how to plan a Tibet tour in October

In October, the temperatures are starting to cool down, although most of the region still stays above freezing. Average temperatures across the plateau range from around 1 degree to as high as 17 degrees, with a large temperature difference between day and night. While it can get colder at night in October, the bright sun and clear skies at the high altitudes of the plateau mean the days are still fairly warm.

The entire plateau is filled with bright sunshine throughout October, with almost no rain at all, and the thinner clean air makes the ultraviolet rays of the sun stronger again after the summer. In Lhasa, known as the “City of Sunshine”, temperatures are still mild, ranging from 2 degrees at night to around 18 degrees during the day, with more clear days than cloudy and less than 10mm of rain through the while month. 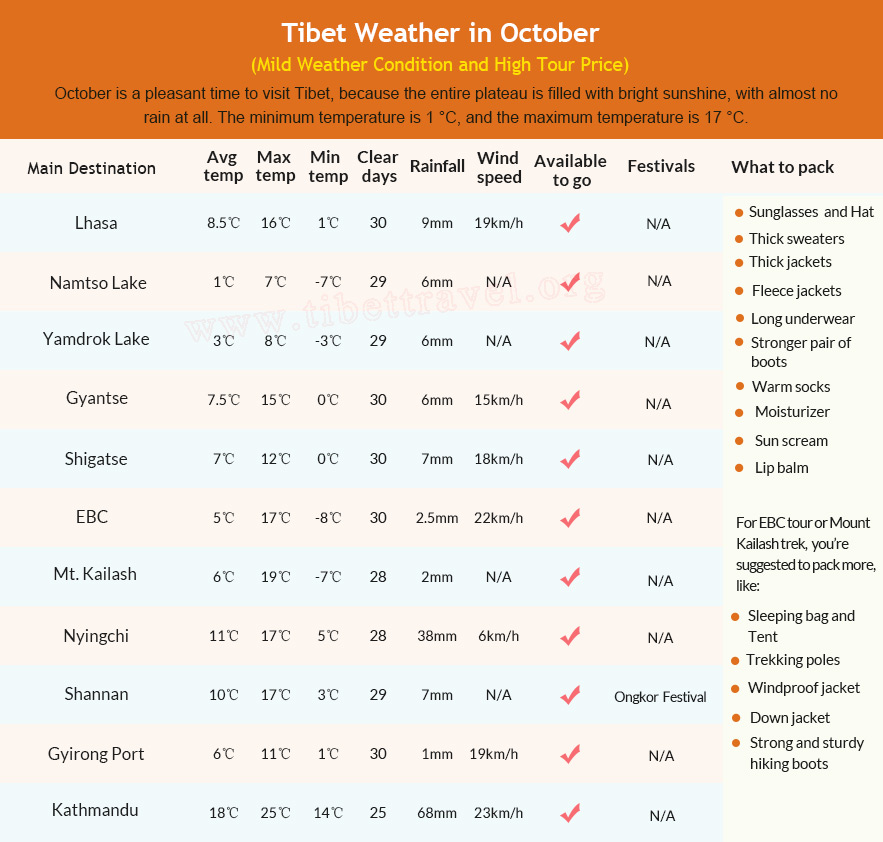 Autumn in Tibet is one of the most beautiful times of the year in most of the plateau region. Still a relatively popular time of year for tourism, trekking is the biggest pull to the plateau for many, while for others it is the fewer tourists and lowered costs that are the main reason for visiting in October. October is the main start of the low season for tourism in Tibet, as well as being the second trekking season for the year, which runs up to the middle or end of November.

Pilgrimage is an important part of Tibetan Buddhism, and the autumn months are the best time to experience the pilgrims making the ritual kora around Lhasa’s Jokhang Temple, and prostrating in front of the doors, one of the most spectacular sights of the Tibetan plateau. October has one of the best weathers of the year, but is still crowded with tourists, which make touring crowded. October is also the Chinese National Day holiday, and a very busy time for domestic tourism in Lhasa. 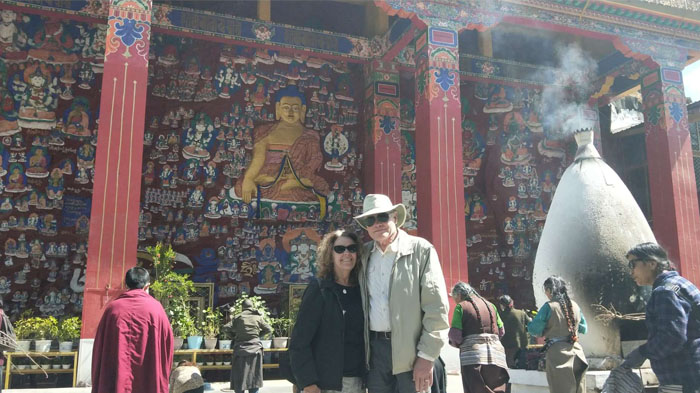 Experiencing the pilgrims make the ritual kora around the holy Jokhang Temple in October.

The last month of autumn, Lake Namtso is getting cooler, and the nights are now getting very cold, as the lake heads towards winter and icy covering. The yaks of the meadows are no longer apparent, having been moved to warmer climes for the upcoming winter. The tail end of October is when the ice starts to form on the edges of the lake.

October is the main autumn month in the area of Lake Yamdrok, and the area is drying up fast, ready for the rest of the dry season. The rains are almost completely gone, with only the odd shower in the late evening, and bright sunshine prevailing throughout the long days. The summer birds begin to gather ready to fly south for the winter, and the beauty of the azure blue waters reflects the view of the surrounding mountains in the lake’s surface. 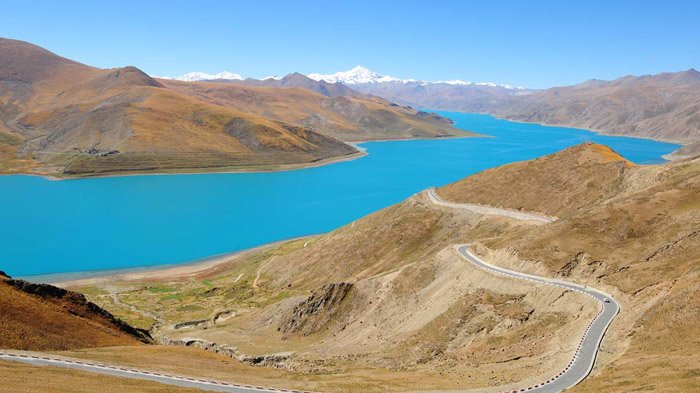 Yamdrok Lake looks like a blue mirror in the sunlight in October.

Autumn comes around with the start of October in Gyantse, and the trees in the valley start to see their leaves turning brown and red and burnished gold as the cooler weather enters. The rain has almost completely gone, and the area is drying up ready for the winter season. The nights are also getting colder, dropping to below freezing once more as the year draws towards its end.

October is the start of the autumn season in Shigatse, as well as being the best time to go trekking in the region. The month is almost completely dry, and the weather is pleasant, if getting a little cold at night now. Daytimes are warm and bright, with only around 1-2 rainy days in the month, and temperatures as high as 12 degrees.

>> Further reading about Best Time for Trekking in Tibet

Mount Everest is a great place to travel to in the month of October, as the weather is finer again, with clear skies for viewing the summit of the world’s highest mountain and fewer tourists at the base camp. The stunning trek from Old Tingri on the Friendship Highway to Everest Base Camp, which takes four days through some of the area’s most beautiful countryside, is a must in October, giving you some of the best views of Everest and the surrounding mountains.

Mount Kailash in October is also a great place to be, as the kora trek around the world’s most sacred mountain is dry, the weather is cool and comfortable, and the views of the unclimbed peak of sacred Mount Kailash are the best in the year. October is also a time when pilgrims from across Tibet make their way to the various sites of pilgrimage worship, often trekking or prostrating for thousands of kilometers from their distant homes to get to Mount Kailash and the Jokhang Temple in Lhasa. 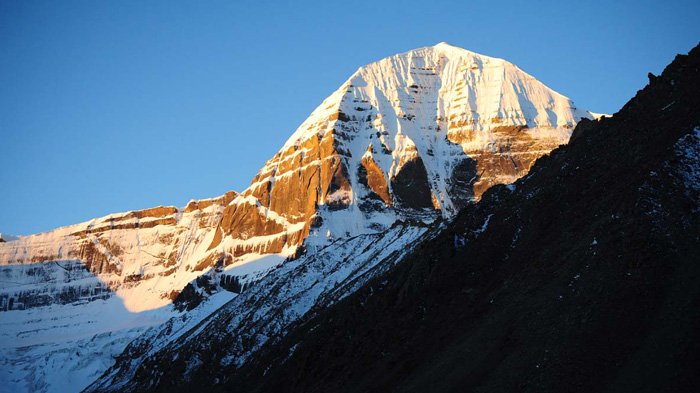 The beautiful twilight view of Mount Kailash in October.

October sees the start of autumn, and the leaves begin their change to browns and reds, ready to cover the ground with a scenic pastel carpet. The weather in October is fine and ideal for trekking and touring Nyingchi, and the clear skies give a great view of the snow-capped mountains.

As the temperatures drop through autumn, Lhokha sees almost no rain, and the dry weather combined with cold winds from the northeast can make it feel a little chilly, despite the 17 degree temperatures in the daytime. Trekking is ideal in Lhokha in October, and the falling leaves give the area a colorful yet arid look.

Lhasa to Kathmandu Overland in October

As the autumn continues, the trees across the plateau lose their leaves and cover the ground with a multi-colored carpet of rustic hues. The trip across the plateau to Kathmandu becomes one of amazing discovery, as the autumn turns to winter and the temperatures begin to drop. Gyirong is still pleasant, being at a lower altitude, and Kathmandu, now the rains have almost gone, is an amazing exotic city that has some of the best Buddhist and Hindu sites in the world.

Held in the farmlands across Tibet, the Ongkor Festival is an important event in the Tibetan calendar, and happens annually in late September of early October, just before the harvest. In Tibetan, Ongkor means “surrounding the farmland” or “circling the fields”, and the festival does just that. Young women are chosen from the village to make a group of 100 people, who then perform a kind of kora around the fields to be harvested, led by religious leaders and the community leaders. This form of offering and sacrifice is done to ask for a good and bumper harvest, and the festival can be found across the farming areas from Ngari to Lhokha. The festival originates in the lower reaches of the Yarlung Zangbo River, in the area around Tsedang in Lhokha Prefecture. 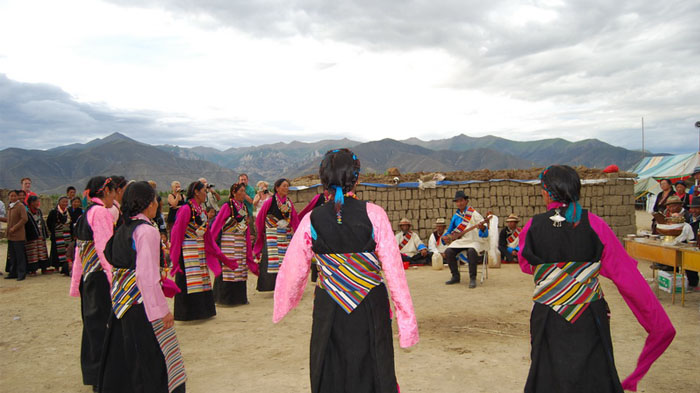 Friends and relatives get together to sing and dance for the Ongkor Festival in October.

What to pack for traveling Tibet in October?

October is the time when it starts to get colder at night across Tibet, and as well as having comfortable clothes for the warm and sunny Tibetan days, you will need to have some thick sweaters and jackets for the evenings and nights across the region. Long underwear can also be beneficial at this time of year, especially for those traveling to the outlying areas in the west of Tibet. Strong and sturdy hiking boots are the best footwear in October, as the ground is dry and rough, and many of the trails are rocky and tough to pass along.

Warmer fleece jackets can also be useful in the colder areas of Tibet, around Lake Namtso and Mount Kailash, to ward off the chill winds that blow across the plateau, and you should remember lip balm and moisturizer to protect your lips and face from the biting cold winds that have come back for winter. While it may be getting colder, the sun is still just as strong, and that ever-essential sun block and hat are a major requirement. And do not forget your sunglasses, to protect from the bright autumn sunlight.

October is one of the most beautiful times of year, with the leaves on the trees changing colors to give the plateau a multi-colored hue. Aside from the first week, the plateau is a little less crowded, with fewer tourists in the big cities and along the trails, giving you a more pleasant and tranquil vacation. And if you can get to Tibet during one of the stunning festivals that can be found, then you will get a unique chance to uncover a little more of the unique Tibetan culture, and gain a greater understanding of the Tibetan Buddhist people. Just try to avoid the Chinese National holiday, which lasts for an entire week from October 1. 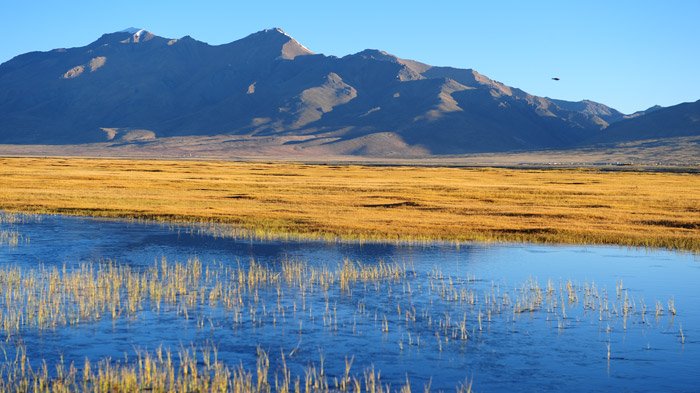 The stunning landsacpe of Tibet in October. 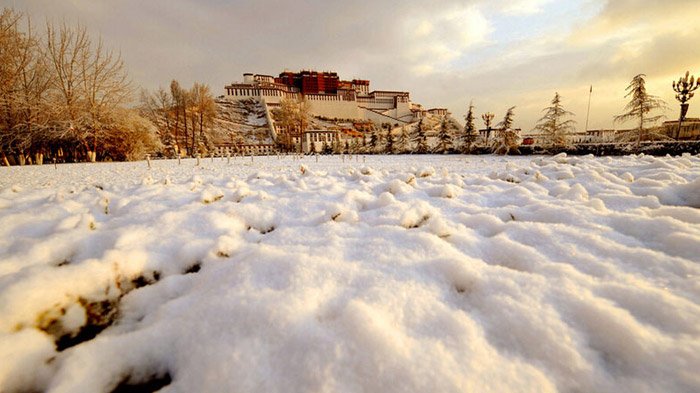 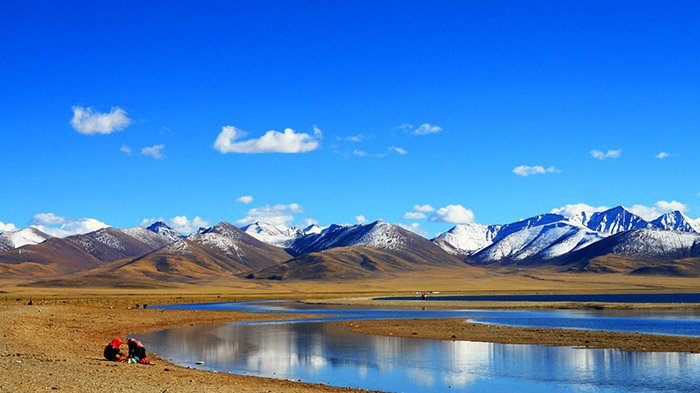 The clear water of Namtso Lake and surroundings attract lot of tourists in October. 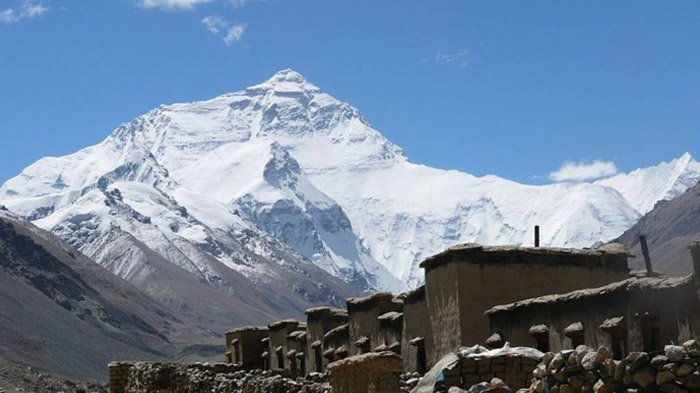 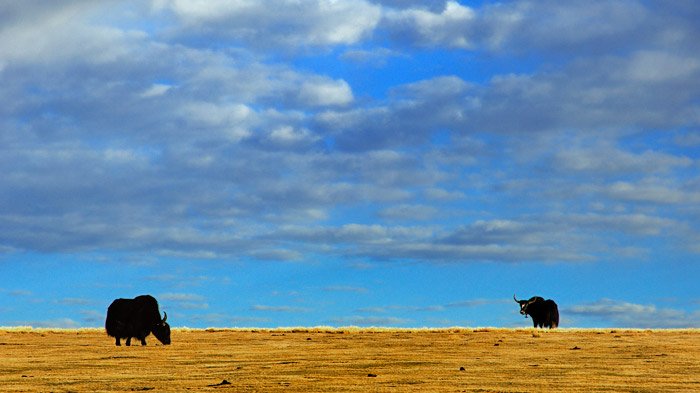 The golden yellow is the dominant color of October in Tibet.

0 Comment ON "Tibet Weather in October: Tibet temperature and how to plan a Tibet tour in October"