Tibet Weather in July: Tibet temperature and how to plan a Tibet tour in July

July is one of the warmer months of the year, and is the beginning of the main part of the monsoon season in Tibet. Temperatures across Tibet rarely get above 30 degrees in the month of July, with a high of around 23 degrees throughout the month. While this is one of the hottest months, the average temperature is normally around 16-20 degrees, and at night, the temperature rarely gets above 8-9 degrees in much of the region. These cooler nights will mean you still need to have that sweater to hand. 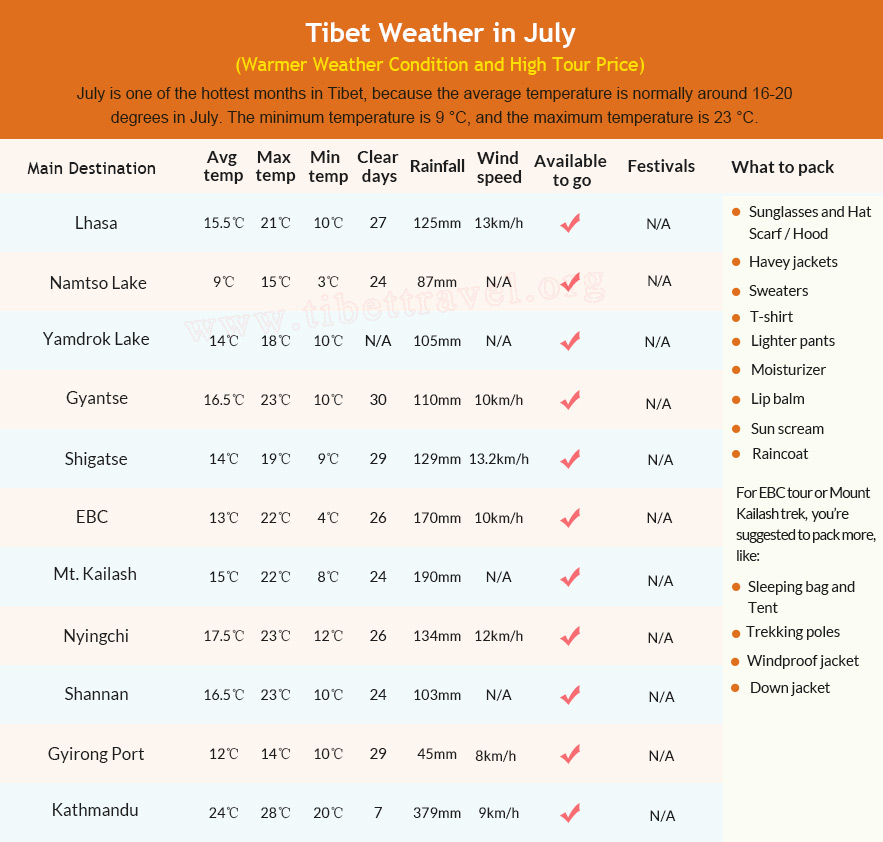 July is the first month of the main peak season for tourism in Tibet, yet is also one of the wettest months of the year on the high-altitude plateau. Despite this, thousands of tourists flock to the plateau for the middle of summer, and thankfully the rains do not have much effect on their enjoyment of the region. The capital city of Lhasa is filled with crowds of people as the main tourist season gets under way, and the attractions are filled with wonder-struck travelers, rushing to the plateau to experience the unique Tibetan culture and the abundance of Tibetan festivals that can be found across the region.

In Lhasa in July, you will get some of the best views of the Potala Palace from the square in front of it, glowing in the bright sunlight, and the climb up the many steps to the palace itself is a feat of stamina, capped by the amazing experience of the Dalai Lama’s winter palace itself. Below the palace lies the Jokhang Temple, a spiritual center of Tibetan Buddhism and the most sacred building in the region. While the weather may be wetter, as well as hotter, it is a great time to tour the city, as even the nights are warmer and more comfortable. 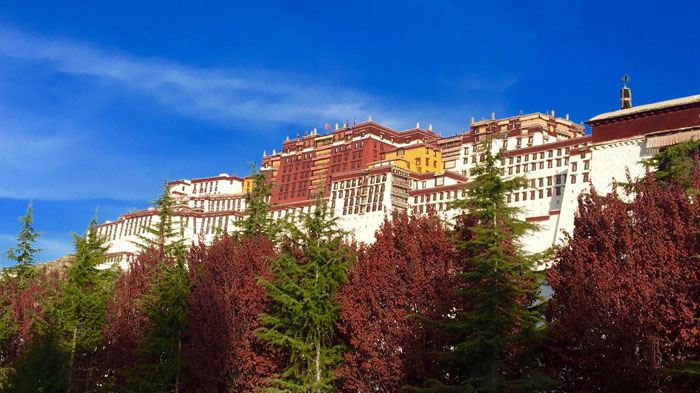 Potala Palace is glowing in the bright sunlight.

As summer progresses, the grasslands become richer and the herds of yaks are a common sight across the vast plains to the west and along the shores of the lake. Temperatures are much more comfortable now, and there is also the option of staying at the Namtso lakeside for the night, making your trip to this holy lake much better.

While the rains may not have become heavier in July, Yamdrok still sees plenty of wet days, with only around 17 clear days throughout the month. The pure azure blue of the lake shimmers in the sunlight on those clear days, and the temperature reaches highs of around 18 degrees, making sun block and hats a necessity to ward off the harmful UV rays.

July is the true start of the monsoon season in Gyantse, though the rains are still not as heavy as Shigatse, a little way to the west. Slightly protected by the surrounding mountains, Gyantse is a delightful city in July, with warm days reaching around 18 degrees and comfortable nights.

Head out to Shigatse, and you can take a tour of the Tashilhunpo Monastery, the seat of the Panchen Lama, Tibet’s second highest incarnations, and take in the stunning sight of the Gyantse Kumbum on the way, a 32-meter stupa that contains an auspicious 108 chapels and is the only one of its kind in Tibet. While the rains are heavier, they mostly come in the evening and overnight, leaving the days open for touring. 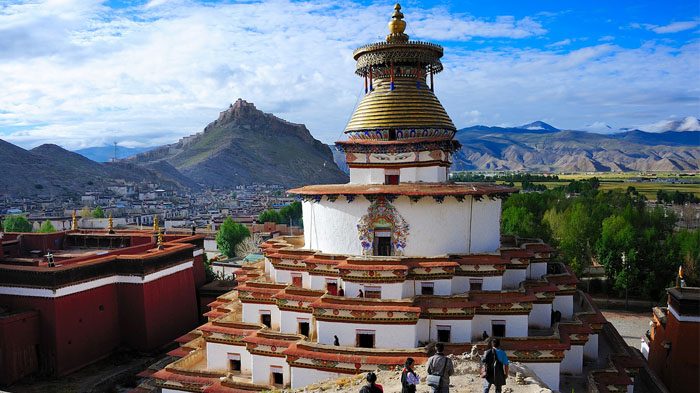 Gyantse Kumbum has been described as the most important of its kind in Tibet.

While the rains may be getting stronger around Mount Everest, the temperatures are also warmer, with highs of around 22 degrees in the daytime, making it an amazing experience to visit EBC in July. Most of the rain does fall at night or in the late evenings, so the days are mostly bright and clear, with around 20 clear days through the month.

July is an amazing month to take in the views of the world’s most sacred mountain as you take a trek around Mount Kailash. High temperatures of around 22 degrees make the trek more challenging, and there is a high chance of rain through many of the days of July.

As the rains get heavier, July is one of the best times to take shelter and enjoy the toothsome foods of Nyingchi, including the unique matsutake banquet. Used for the famed Stone Pot Chicken dish of Nyingchi, the fresh mushrooms are gathered from the mountains to add to this unique local dish. And while the rains are heavier, there are still plenty of opportunities to visit the stunning sights of Nyingchi Prefecture. Click here to know more about the best time to visit Nyingchi

July sees an increase in both temperature and rainfall, with heavier rain for more days throughout the month. The formation of the summer monsoon has a greater effect on Lhokha than in Lhasa, and the winds become stronger, influenced by the Indian Southwest Monsoon combined with the higher pressures of the northwest Asian monsoon activities.

Lhasa to Kathmandu Overland in July

Traveling across the plateau to Kathmandu in July is an awesome experience, with the vast plains and prairies covered with lush green grass and grazing yaks and sheep. Even Gyirong is warmer, with highs of around 14 degrees as you exit China for Kathmandu, where the rains are hammering the exotic Nepali capital in the wettest month of the year.

Universal Prayer Day, also known as Dzam Ling Chi Sang, is one of the most spiritual celebrations in Tibet, and is held on the 15th day of the sixth month in the Tibetan calendar. Also known in some parts as the Incense Festival, Tibetans go to high hills and mountaintops to burn incense and Juniper branches, as well as hanging prayer flags and praying. 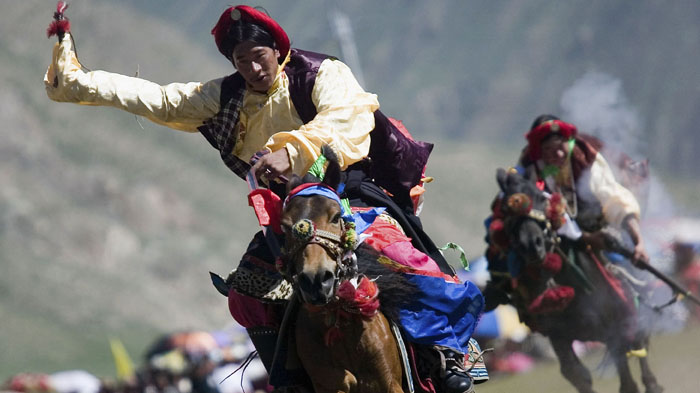 You will have a chance to appreciate the furious horse racing during Yushu Horse Racing Festival.

Held in the Amdo area of ancient Tibet, in Qinghai Province, the Yushu Horse Racing Festival is one of the bigger events of the Tibetan festival calendar in Qinghai Province. Held towards the end of July, the festival celebrates the use of horses in Tibetan culture, and is one of the top three horse-racing events in the Tibetan areas. Held just outside the town of Yushu in Qinghai, this amazing festival has become very popular with tourists, and the annual event sees thousands of Tibetans from across the region attending to racehorses, show their skills at horsemanship, and play other games and competitions.

What to pack for traveling Tibet in July?

July is a warm time of year, though it can rain at times as this is the main monsoon season in Tibet. Packing must, therefore, take this into consideration, and while you may not need many sweaters and heavy jackets, you will probably need to bring a raincoat with you, and a good hat or hood. The warmer weather means that you can get away with light tops and t-shirts during the daytime, though you might want a warmer sweater at night when the temperature drops.

Good strong boots are a must, as the rain can make the ground muddy and soft, which will ruin normal shoes when you are walking. Lighter pants can also be worn, through you are advised to not wear shorts, especially in the monasteries and temples. For the ladies, it is advised that you refrain from wearing short skirts and shorts and skimpy or halter tops, as this is considered to be inappropriate, even when it is very hot in Tibet.

July is one of the best months in Tibet for warm weather, and this makes it also one of the most popular times of year too. The peak season for tourism in Tibet is now under way, and the plateau sees a massive influx of international and domestic tourists, who crowd the temples and monasteries of Lhasa and Shigatse. It is also one of the most expensive months to travel to Tibet, and not a good time for budget tours. July and August see the prices at their maximum in Tibet. However, if you can handle the crowds and are not concerned with the cost, July is the ideal time to travel to the plateau, with less rain than in August. 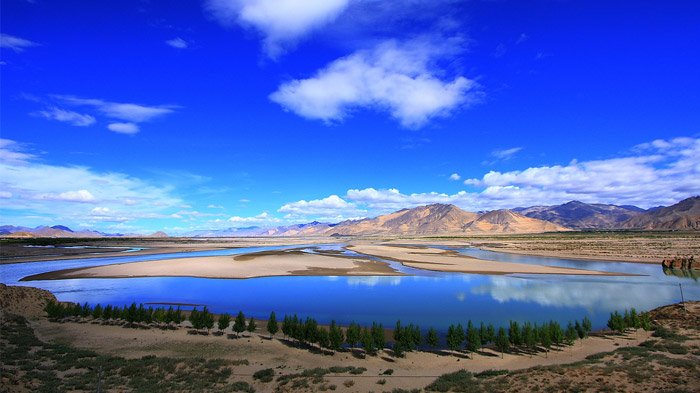 Beautiful landscape of Tibet in July. 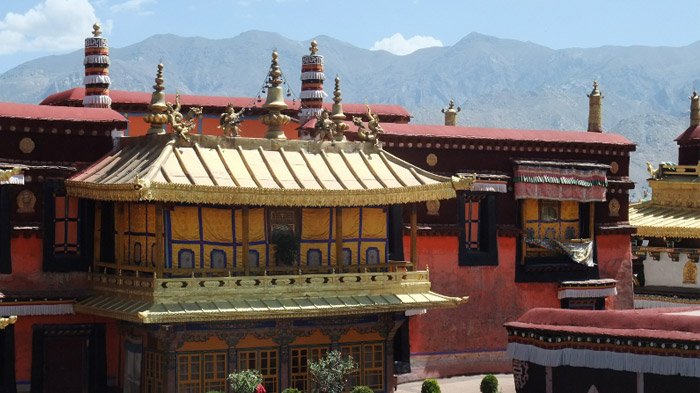 Sublime Jokhang Temple is bathing in sunshine in July. 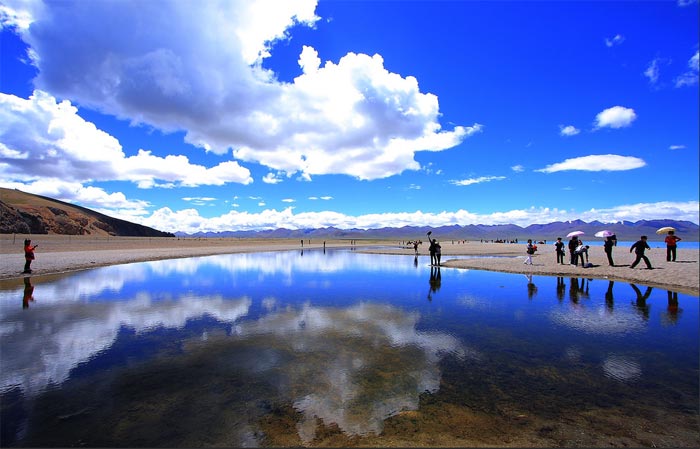 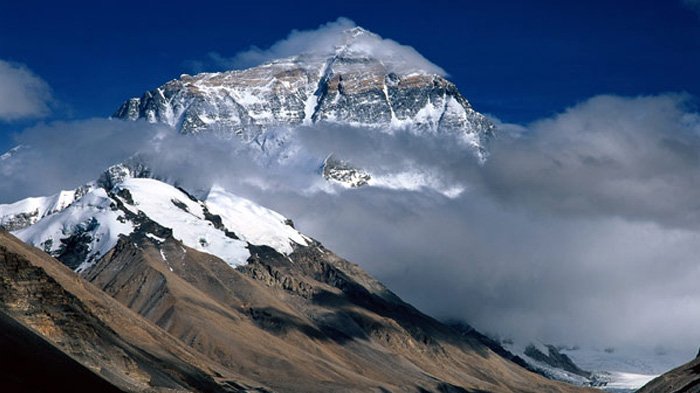 The peak of Mount Everest is covered by mist in July due to rainy season.

0 Comment ON "Tibet Weather in July: Tibet temperature and how to plan a Tibet tour in July"