Tibet Weather in August: Tibet temperature and how to plan a Tibet tour in August

August is often known around the world as the main holiday season, and in Tibet, it is no different. It may be the monsoon season on the plateau, but it is also the peak season for international tourism, and the plateau sees thousands upon thousands of travelers entering the capital city every day. The rainiest month in the year, August often sees rainfall of up to 125mm throughout the month, as an average. This heavier and more frequent rainfall can mean travel in the region is much harder in some of the more remote and outlying areas. Overall, though, August is still the best month of the year to visit Tibet for most people, as the warmer weather and milder climate is more comfortable for travel. 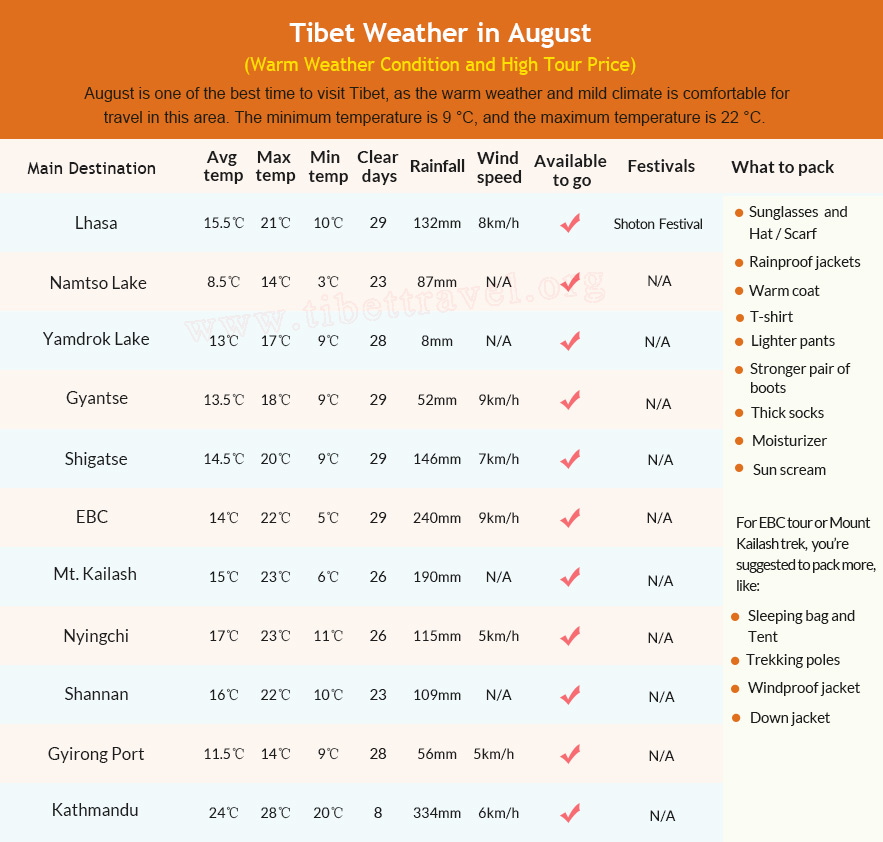 August is the wettest month of the year, but is also the most popular, thanks to the “normal” rainfall pattern on the plateau of mostly falling in the late evenings and overnight. However, while it is the busiest season in the year, there is a need to take more care during August, as the rainy monsoon season can often bring landslides and mudslides, which can cause havoc with travel in the region. August is the height of summer, and is one of the most popular times of the year to visit Tibet.

August is the wettest month of the year in Lhasa, but it is warm, and the rains still tend to fall in the evenings and overnight, which leaves the days free to explore the city. However, the UV rays are at their most intense in August, so it is important to cover up, despite the temptation to relax in t-shirts.

Lake Namtso is at its warmest in August, and the stunning scenery of the grasslands has reached its peak, with colorful flowers blooming in the rolling plains of the north. The lake shows no signs of the ice that covered it for half of the year, and is a tranquil and peaceful place to contemplate and explore. The last of the warmer months of summer, August is one of the best times to head to this awesome lake. 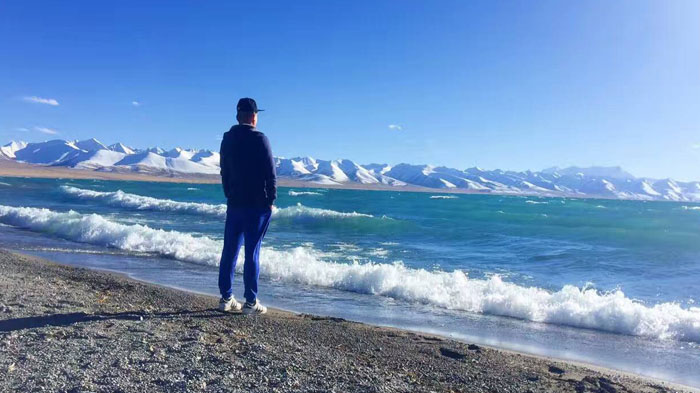 Enjoying the stunning scenery along the holy Namtso Lake in August.

June is the hottest month at Yamdrok, and the lake starts to see cooler weather and less rain as August rolls around. As the rains dissipate they leave the lakeside and the surrounding hills with lush green grass that is ideal for the grazing yaks and sheep, and the nomadic herders can be found around the lake in the vast open meadows of Lhokha.

In August, the monsoon season starts with a vengeance, and the area sees as much as 276mm of rain throughout the month, with only around 12 clear days for the entire month. The wettest month of the year in Gyantse, the temperatures drop slightly, and the rain is strangely refreshing, turning the valley into a lush green paradise.

August is the wettest month of the year in Shigatse, but is not even that bad, with only around 146mm of rain covering the whole month. Summer temperatures in Shigatse are fairly constant throughout the summer, with highs of around 17 degrees in the day and dropping to as high as 9 degrees at night.

The wettest month of the year at EBC, August is often too wet and cloudy to visit EBC and the mountain to get good views of the summit. The wetter monsoon weather from the Indian Monsoon covers the mountain’s high peak with clouds for most of the month, making it impossible to see, or to guarantee a good view. 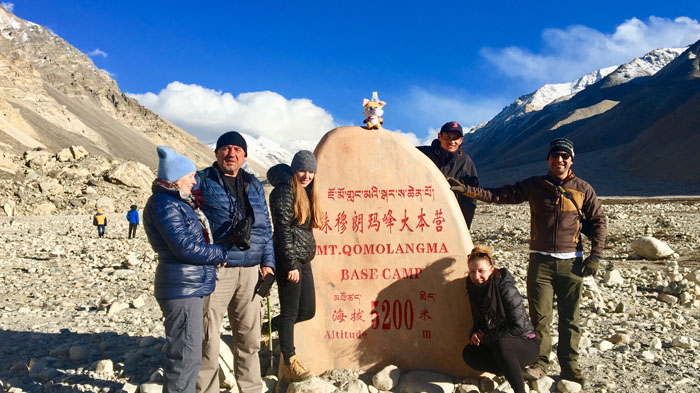 A lifetime journey to Everest Base Camp in August.

While Mount Everest can sometimes be a little wet, and the peak can often be covered in clouds, Mount Kailash is a great place to visit in summer, though you should take care when trekking around the kora because of the rains.

August is the time of the flowering of the main ground plants in the stunning Lulang Forest area of Nyingchi. Primroses, irises, gentian, and many other flowers start to bloom in August. The pastures of the area are filled with colorful flowers among the lush meadow grasses, and the area is reminiscent of the Swiss Alps in summer.

The wettest month of the year, August is still relatively dry in Lhokha, thanks to the mountains reducing the amount of rain that can cross into southern Tibet. With only around 109 millimeters of rainfall throughout the month, as well as higher temperatures reaching as much as 22 degrees, even trekking is still a good activity in the prefecture as the summer draws to a close. Click here to know more about Tibet Trekking Tours 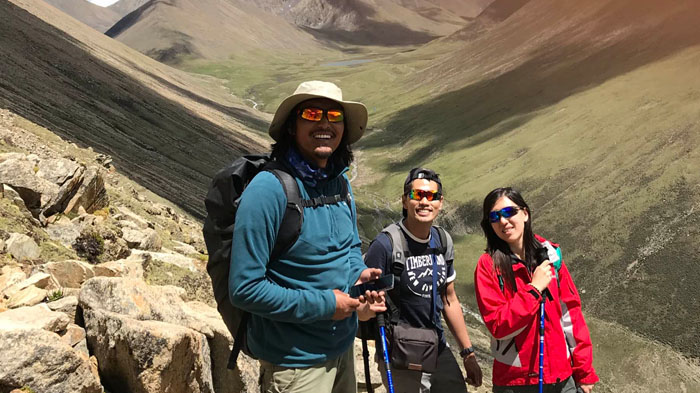 Our clients are enjoying their trekking in August in Shannan, Tibet.

Lhasa to Kathmandu Overland in August

While Kathmandu’s rainy season is starting to abate, there is still enough rain to drench you when you get to the Nepali capital. The trip across the plateau in August is awesome, though, with the peak of the monsoon making the scenery lush and verdant, and with wildflowers blooming all across the plains.

The Ganden Thangka Unveiling Ceremony is also held on the fifteenth day of the sixth month, at the Ganden Monastery in Lhasa. Held in the memory of the enlightenment of the founder of the Gelug School of Tibetan Buddhism, Je Tsongkhapa, the monastery puts on show the many relics that it houses, which are some of the holiest relics in Buddhism. The huge thangka, a painting of religious images on a giant cloth, is unfurled on the thangka wall of the monastery, and thousands of pilgrims and devout Buddhists come to honor the Buddhist master and pray at the lower hem of the thangka. 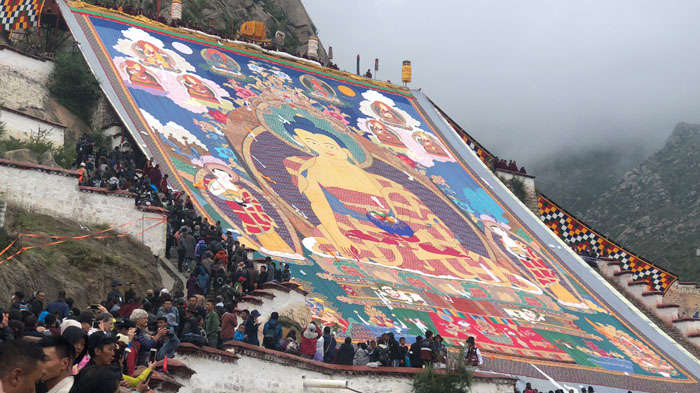 The festival includes thangka unveiling and the performance of Tibetan operas

Shoton Festival is the most important and attractive festival for Tibetans.The Shoton Festival in Tibet is a major event in the Tibetan Buddhist calendar of religious events, and while it is sometimes called the Yogurt Festival, it has more to do with the celebrations of the end of the monk’s period of fasting than yogurt. That said, yogurt is the main food of the festival, as it symbolizes the milk curds that the locals would give to the monks at the end of their 100-day Yarné, or fasting period. These days, the festival includes thangka unveiling and the performance of Tibetan operas, and is a great time to be in Tibet.

What to pack for traveling Tibet in August?

Packing light is the order of the day in August. However, take a sweater, since it can still get chilly, even after the warmer days of summer. A light raincoat is also necessary, to throw on over your t-shirt when the showers sometimes fall. Jeans can be too hot and heavy in the summer, so lighter pants are a much better idea. With temperatures reaching the mid-twenties and higher, you will find that sun cream, moisturizer, and sunglasses are a must, and that hat with the brim that you never wear will finally come in handy.

Some of the outlying areas will be pretty wet, so a good strong pair of boots, preferably waterproof, is actually necessary. Take some comfortably thick socks, especially if the boots are new, to give your feet the softness they deserve, though they are not really needed for warmth this month. August may be hot and sunny, but there are rules on the dress in Tibet, and skimpy or short clothing is usually frowned upon, so avoid taking spaghetti tops, halter tops, crop tops, and short skirts or shorts.

A tour to Tibet in August is the peak season for tourism, and the busiest time of the year, as well as the most expensive. Planning is definitely the key this month, since there are a lot of tourists in the region throughout August. Make sure you book well in advance, to avoid disappointment, and prepare for a very crowded region throughout the month. The warmer weather does mean that it is more comfortable to travel, and with a few exceptions where the rains are heaviest this month, most of the plateau only sees the rain falling in the evenings and overnight, so there is little to worry about rain spoiling the holiday. Just make sure that you cover up, especially if you are under the sun, as sunburn or sunstroke can be a major concern. 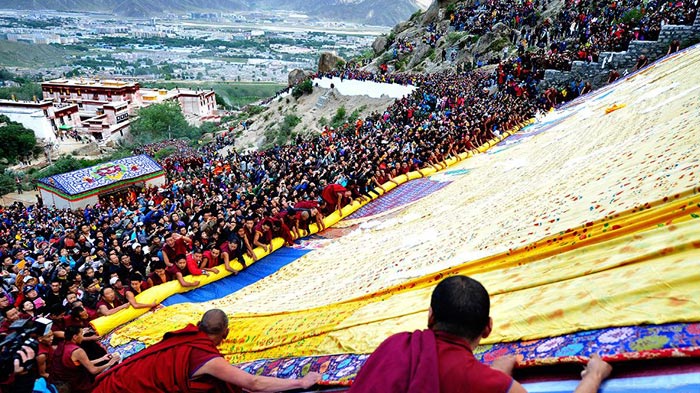 Monks are displaying the giant painting of Buddha during Shoton Festival. 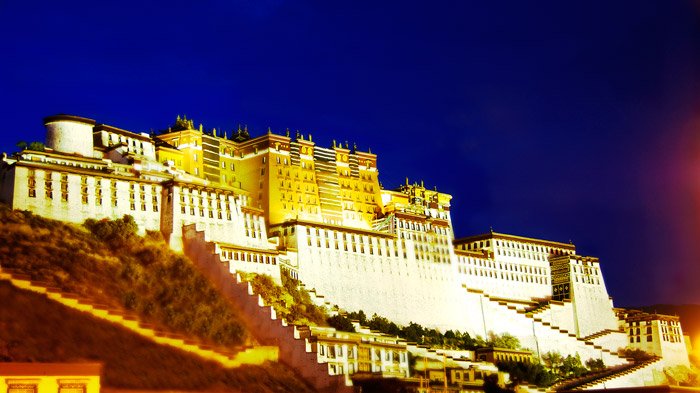 Splendid night scene of the Potala Palace in August. 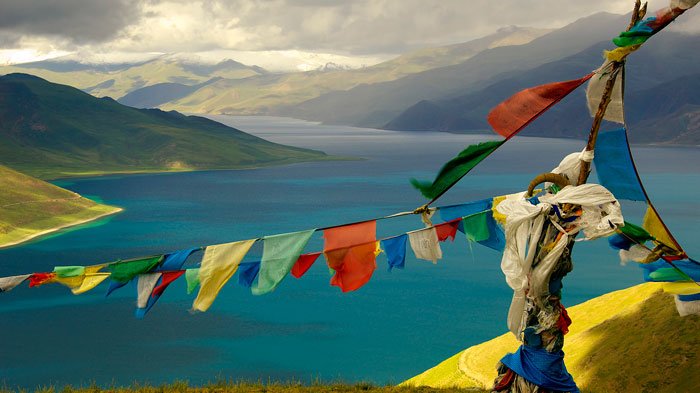 Yamdrok Lake is just like an extraordinarily picturesque in August. 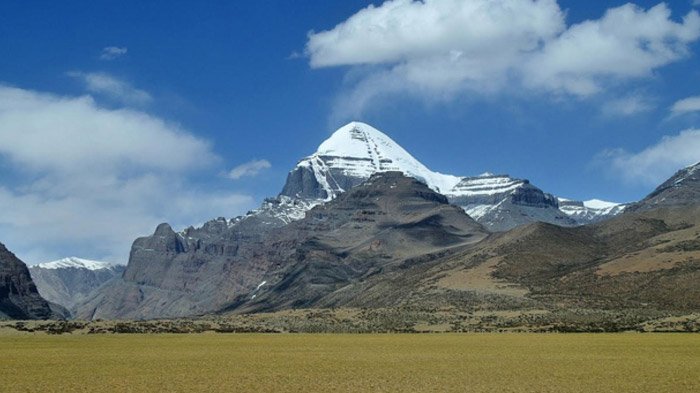 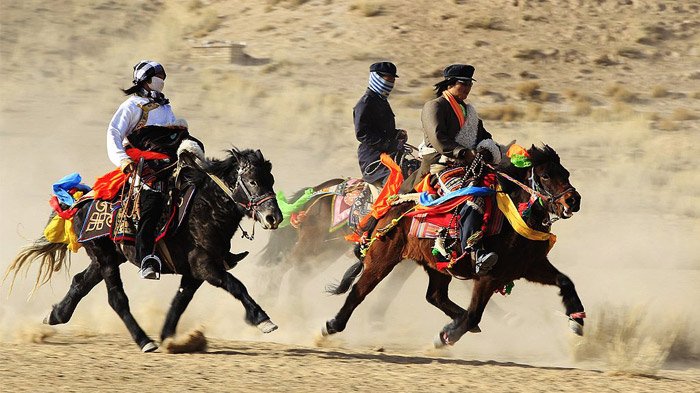 Tibetan are racing horse intensely in the Nagchu Horse Racing Festival in August.

0 Comment ON "Tibet Weather in August: Tibet temperature and how to plan a Tibet tour in August"