Why Tibetan Yaks are Indispensable in Tibet?

Tibet. What comes to your mind when you first hear the word? In most of us the word alone conjures images of monks, meditations, mountain peaks with ice rolling over, blue skies, red robes and may be, the divine Shangri-La. But in reality, Tibet is much more than that. This paradise, known as the Roof of the World, is the highest place to heaven, with an average elevation of 4900 m. This enigmatic, yet striking abode in a plateau north of the Himalayas, is a longed spot for many outsiders. 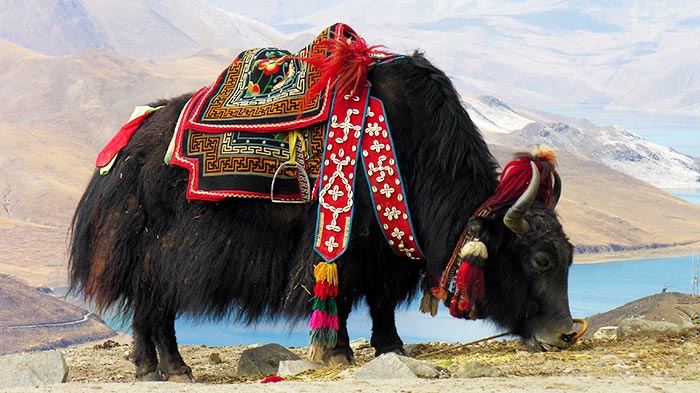 Why Tibetan Yaks can work in plateau without trouble?

Yaks have three times more red blood cells than normal cows. This enables them to live without any hurdles on the high elevation grasslands of Tibet. Their long, thick hair insulates their bodies from winter temperatures that can get to -30 degree Celsius or colder. Most yaks are black, explaining why the heat radiation from the bodies can provide an upper hand. However, it is not uncommon to see white or grey ones especially on the grasslands of northern Amdo (modern day Qinghai province). 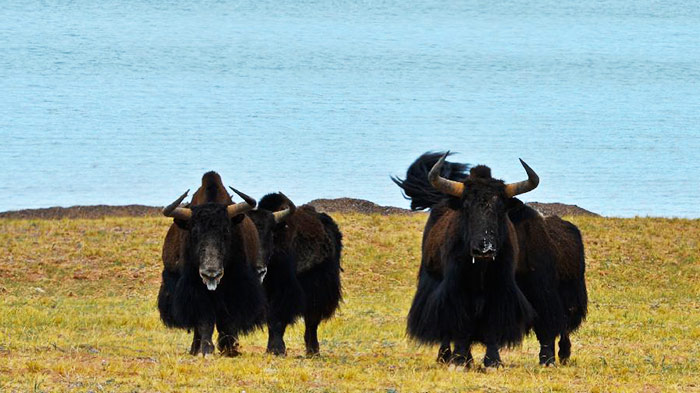 Most yaks are black.

The number of yaks in Tibet is larger than the population of Tibetan people. The whole Tibet has a population of more than 260 million, while, the number of yaks in the first producing area (Naqu) is more than 300 million. Most of the yaks grow in China's Qinghai-Tibet Plateau and its surrounding regions which are above 3,000 meters high. Yaks have an aptitude to endure the cold, with a limit of climbing the glacier to 6400 meters.

The yak is also good at walking on steep and dangerous roads, climbing snow-capped mountains and going across swamps and rivers. The yak also has an ability to recognize the road. If it meets the marshes, it can make a detour to avoid the trap. Yaks are able to carry heavy loads for long distances. They can carry goods up to 100-200kg and walk for about 15km a day. 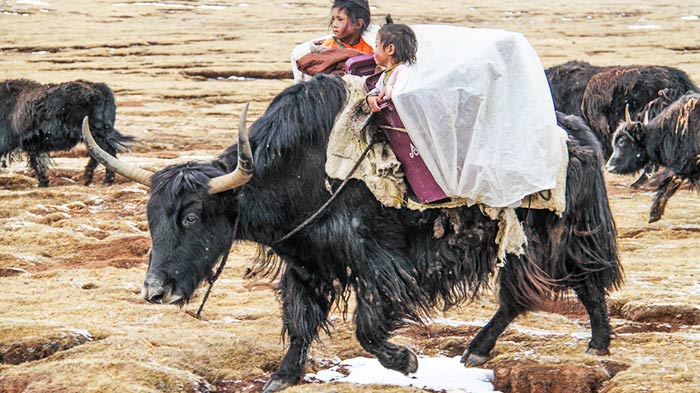 Genetically, yaks are wired to survive in environments with little oxygen and forage. Their lungs are surrounded by 14 or 15 pairs of ribs, in opposition to 13 for cattle, and they act like accordion baffles to help yaks inhale and exhale.

Why are Tibetan Yaks so significant to Tibetans’ daily life?

Yaks are regarded as the treasure and boat in the Tibetan community. These unique species play a significant role in the daily life of Tibetans. The locals rely on the yak milk for cheese and butter that serves as the delectable ingredient for their ubiquitous butter tea and offerings to butter lamps in the monasteries. 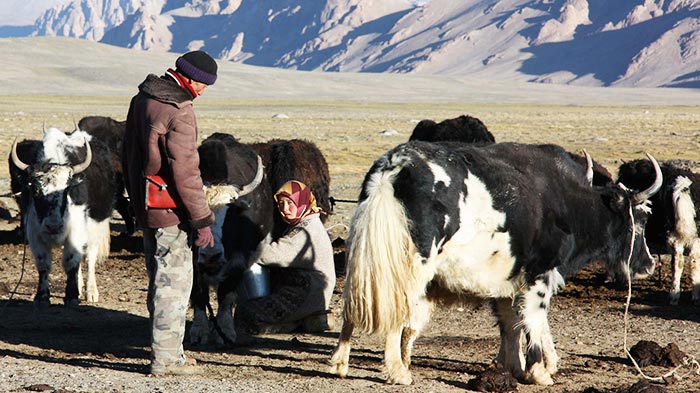 The locals are milking the yak.

Furthermore, the outer hair of the yak also proves to be significant. It is woven into tent fabric and rope while the inner wool is spun into chara, a type of felt, for religious practices. The hide of this animal is used in the soles of boots. You will be amazed to know that even the yak’s rug dung is useful. It is utilized with yak dung for fundamental fuels, left to dry in little cakes of walls of most Tibetan abodes. In addition, the yaks’ skins serve as building materials for Tibetan boats and aprons. Yaks are important to the extent that Tibetans name them just they name their children. 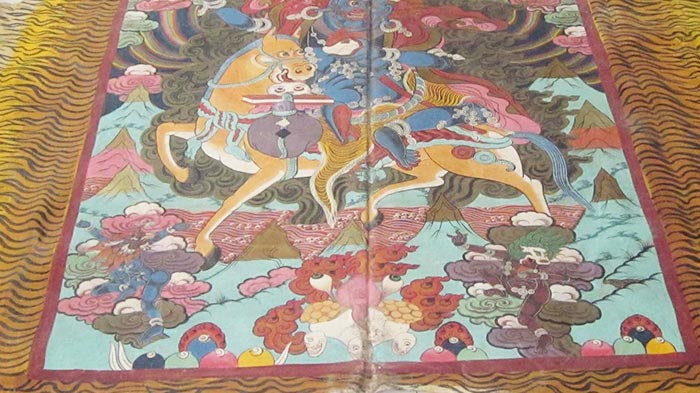 Yak meat comprises high protein. It tastes fresh and delicious. Especially in winter, it is a kind of nourishing food. If you go to Tibet, yak meat is the most delicious food that you should not miss. The flexible and smooth hair of this animal is used to make advanced textiles and Tibet wool. The yak's tail hair can be used to make wigs and false moustache for opera performance. Yak leather is used to make Tibetan high boots and senior leather shoes which are of high quality. These shoes are quite popular with customers from all cities in China. Dried yak dung is the main fuel for herdsmen. They rely on it to keep warm, cook tea and cook meal. Even the bones which are grinded into powder are also very good for fertilizing the farmland. 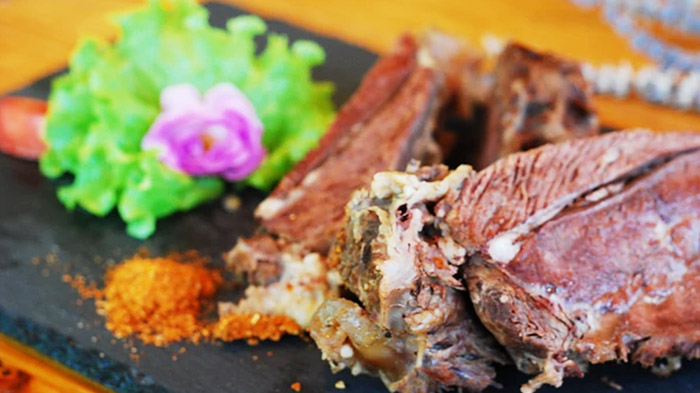 Yak meat is the most delicious food that you should not miss.

Moreover, yaks are used as a mode of transportation in the nomadic areas and villages of Tibet. They start to be used as pack animals from the age of 2 and can often live for more than 20 years. Travellers who choose to make Tibet trekking tour often hire yaks to carry their luggage for them. You will find a wide use of Tibetan yaks on the farmland across Tibet. Tibetan yak caravans are frequently used for adventurous trips and mountaineering. 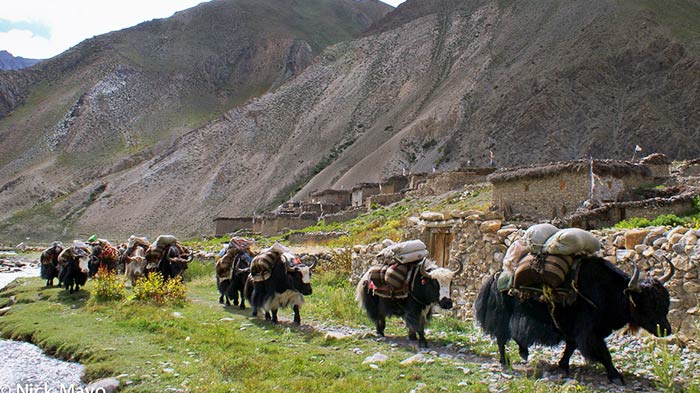 The yak's cardiopulmonary function is very strong. Carrying more than one hundred kilograms supplies, it can also climb the peak at six kilometres above sea level where the air is thin. People find it hard to adapt to the high altitude, but yaks do not need to worry about the lack of oxygen, their blood pressures or their heart vessels. Yaks do not only work hard to serve their master in the plateau day by day, but also play an important role in sports event. Every year, a yak racing is held. All the yaks show their great sports spirit on the field. 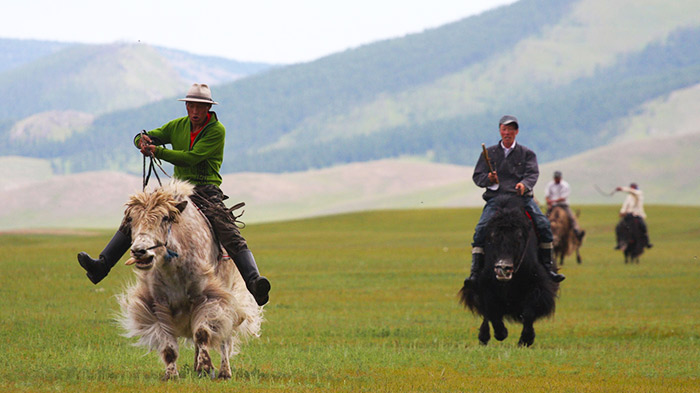 The locals are holding a yak racing.

Tourists can see and experience this spirit animal of Tibet in many different areas here. Some instances to name can be during a tour from Lhasa to Namtso via the Nagqu, during the trekking adventure from Everest Base Camp to Advanced Base Camp and in many different trek spots of Tibet.

In parts of Tibet, yak racing is a form of entertainment at traditional festivals and is considered an important part of their culture. More recently, sports involving domesticated yaks, such as yak skiing or yak polo, are being marketed as tourist attractions in Tibet.

Tibetan life revolves around the yak, which the people have herded and placed at the centre of their culture for at least two thousand years. Tibetans are warmed by yak-dung fires and lit by yak-butter lamps. They eat yak meat, blood, butter, cheese, and yoghurt. They use yaks for transport and weave clothing, blankets, shelters, and even boats out of yak hair. 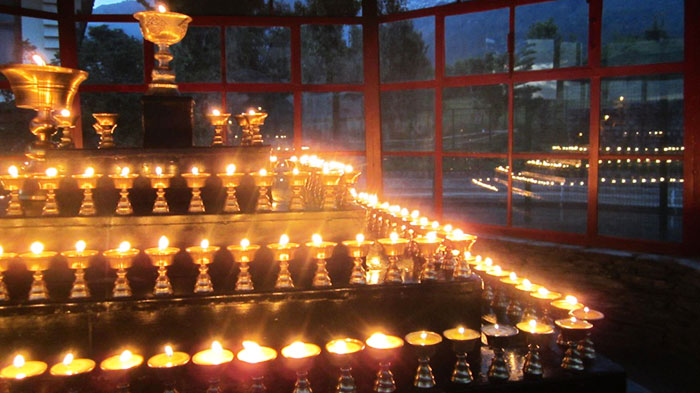 Tibetans are warmed by yak-dung fires and lit by yak-butter lamps.

Their staple dish is tsampa, made of salted tea pounded together with yak butter, to which toasted barley flour is added and mixed by the hand before eating. The dependence in so many ways upon their particular animal herd is typical of pastoralists, the original "butter caters," as known throughout the world. Now you know very well why this amazing animal is indispensable in the lives of Tibetans and even in the lives of some people who make their way to Tibet for touring or trekking.

Exciting, isn’t it? Tibet is full of many such wonders and if, like me, you cannot wait for many such mysteries to unfold before your eyes, plan up your Tibet tour now! You will love it here.

Tibetan culture and identity are prominently linked to Tibetan Buddhism. Religious exercise and Buddhist ideologies are a part of daily life for most Tibetans. Monks and nuns play a significant role in their communities, providing guidance and education. They are often very active in protecting and promoting Tibet's environment, language and culture. Tibetan people have not only managed to survived in the high altitudes of the Tibetan plateau, but have thrived. They have created a unique culture all their own. 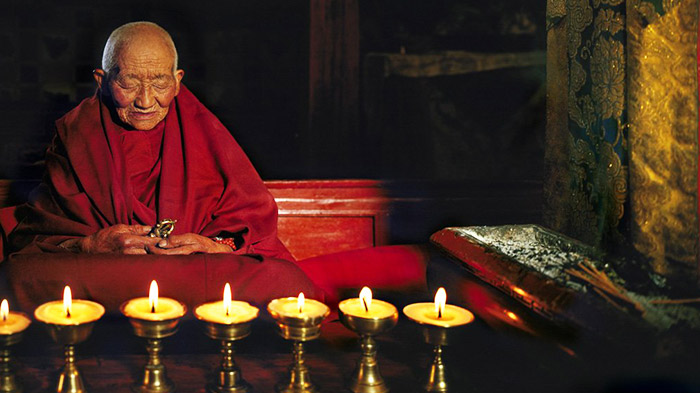 A nun is meditating.

Tibetans living in the grasslands live in large tents, which allow them to be able to move to greener pastures for their livestock. Their tents are beautiful and appear simple, but they are quite complex. People who live a less nomadic lifestyle live in wooden houses that are covered with Buddhist carvings. Every square inch of their houses are decorated with bright colours, and visitors are always welcome.

Different seasons bring out the different faces of this enigma, thereby making it an ideal spot for vacation for you regardless of whether you adore mild temperatures and endless sunshine or shivering snow and blurred isolated surroundings. The place hosts different kind of festivals all throughout the year.

0 Comment ON "Why Tibetan Yaks are Indispensable in Tibet?"