Tsedang Weather and Climate: when to visit Lhoka at the right time?

Lying to the south of Lhasa, Lhoka is one of the more temperate areas of Tibet, with milder weather and warmer temperatures in the winter months. Known as the cradle of Tibetan civilization, this ancient land lies in the lower reaches of the Yarlung Tsangpo River Valley, and is bounded by Lhasa to the north, Shigatse to the west, Nyingchi to the east, and the borders of Bhutan and Arunachal Pradesh to the south.

The administrative center of the prefecture, Tsedang is the fourth largest city in Tibet and lies in the Yarlung Valley, 183 kilometers to the south of Lhasa. One of the upcoming tourist destinations in Tibet, Tsedang has become popular with international tourists in recent years, and lies close to two of the area’s major tourist attractions, Yumbulakang Palace and Samye Monastery.

The climate in Lhoka is one that is a little different from the rest of Tibet. Lhoka does not have the usual four distinct seasons that are found across the plateau, and has moderate temperatures, a diverse climate, and very uneven distribution of annual rainfall. Seasons are odd, and can be short or long, depending on the Southwest monsoon that pushes the warmer air up from India or the colder air of the northeast monsoon in from December to March. As a whole, the temperatures average from 7-18 degrees throughout the year, with highs of up to 25-29 degrees and lows of between -15 and 10 degrees.

Lhoka has a long winter without a real summer, and with no normal shoulder seasons, yet even the winter is mild and not cold. April to May is characterized by a colder climate with more rain than in the north and west, and the south of Lhoka often experiences high winds and some snow until around April. Spring temperatures range from 6-12 degrees on average, with highs up to 20 degrees towards the end of May, and lows that can get right down to -2 degrees in March. 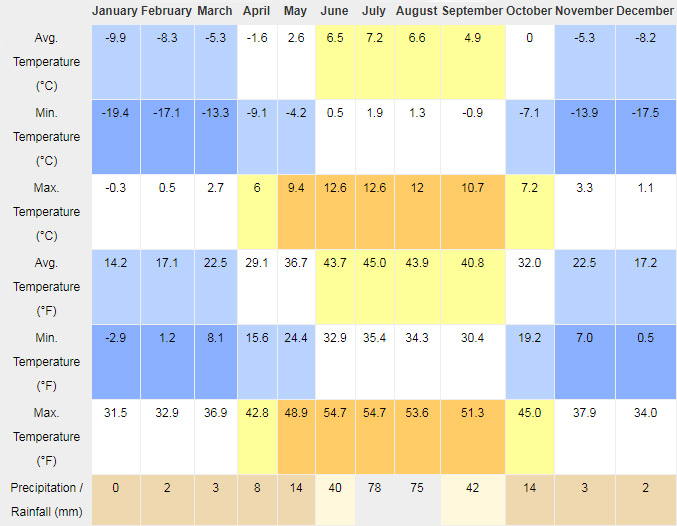 The monthly average temperature and precipitation of Tsedang.

The period from June to August is the rainy season, though most of the rain falls in July and August, with much lower averages throughout the rest of summer. The highest average rainfall in July and August is usually no more than around 78mm for the whole month. Temperatures are not high in the summer months, unlike in Lhasa to the north. Temperatures reach a peak in June and July, with the hottest temperatures reaching only as high as 23 degrees, and averaging around 16 degrees across the two months.

September starts to turn dry, and has less rainfall, with clearer skies for most of the month, rolling into October, where there is very little rain at all. Temperatures in September run as high as 20 degrees, but as low as just 7 degrees, while in October, the temperature at night is already dropping close to freezing, with daytime highs of just 16 degrees.

June to August is usually the best time to visit Lhoka, although the prefecture is good for visiting throughout the year. Lying in the more temperate sub-tropical zone of Tibet, Lhoka has a semi-arid and sub-humid climate, that is good for all kinds of travelers throughout most of the year.

The weather in Tsedang is proportionate to the rest of Lhoka, and as it lies along the banks of the Yarlung Tsangpo River, is milder than Lhasa to the north. The stunning area around Yumbulakang, which lies to the south of Tsedang, just outside the town itself, can actually be visited at any time of the year, thanks to the mostly mild climate of the area throughout the whole year. Tsedang weather is milder than most places, thanks in part to the river valley in which it lies, which makes the area the perfect place to visit all year round. 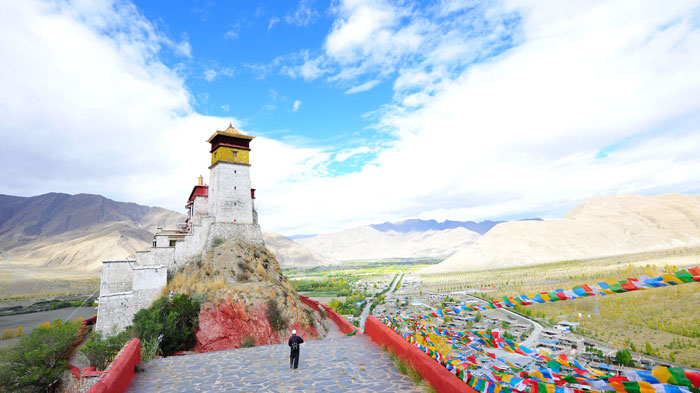 Bathing in the sunshine of summer, Yumbulakang Palace shows its charm to us.

Lake Yamdrok, in the west of Lhoka, is one of the Great Three Sacred Lakes of Tibet, and a great place to come for bird watching. With twenty-one different islands spread across the lake, there are many places where you can get a good view of the summer and winter birds that call this stunning lake home for the seasons. Bird Island is the most popular, as it is the largest, and has the largest population of migratory birds in both summer and winter.

In the winter months, you can see plenty of northern birds that have migrated from northern Tibet to spend the winter on the slightly milder waters of the lake. In the summer months, you also get the migratory birds returning from their more southern winter feeding grounds, and taking over the many islands as their summer homes. Bird watching at Lake Yamdrok is definitely a summer and winter affair, with the best times to see the birds coming in being around April, when the seasons change and the winter birds fly back to the north for the summer, with the summer birds return from their winter feeding grounds. Alternatively, November is also a good time to come, as the winter birds are just arriving from the north of Tibet, and the summer birds are flocking to fly south for the winter. - See the detailed itinerary of 5 days Lhasa Yamdrok Lake tour

Best time to trek from Ganden to Samye Monastery

Trekking in Lhoka can also be done throughout the year, as the rainy season is not as rainy as everywhere else. However, the best time of year to make the trek from Ganden to Samye is from April to June and September to November. This is mainly due to the harsher weather in Lhasa in the summer and winter months, and the trek over the mountains to the stunning Samye Monastery, which sits below the summit of Mount Gongbori. The route of this trek lies across the mountains to the south of Lhasa, and follows the ridges and valleys all the way to Samye Monastery, on the northern edges of the Yarlung Tsangpo River Valley. 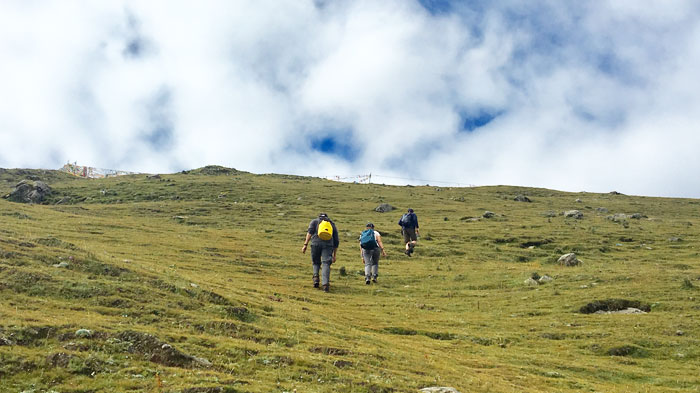 Trekking over the grassy mountains to the stunning Samye Monastery from Ganden Monastery.

Where Check Lhoka Weather Forecast before You Come

Weather forecasting for touring in Tibet has become more popular over the last ten years, with more tourists coming to Tibet for a holiday in the peak season months of summer. The internet is filled with climate data and temperatures for the coming months for Lhoka, so there is no shortage of places to find out the weather before you come. However, with Lhoka’s weather often being a little unpredictable, you can always contact us for a better idea of what the weather is like on the ground right now, and we can give you the local predictions for the weather in Lhoka for the time you will visit.

What to Wear for Lhoka Travel

Packing for Lhoka is not as dependent on the seasons as it is in the rest of Tibet, with the exception of Nyingchi. With cooler summers and milder winters, it can be hard to determine what to bring. However, cold weather clothing is advisable throughout the year, as the temperatures can get a little chilly at night, even in the hottest months of June and July. T-shirts and light pants are fine for most of the year, with a few added sweaters for when it does get chilly, and with some warmer tops and thicker pants in the winter months, when it can get colder at night.

If you are trekking in Lhoka, then you will need to have good strong hiking boots, with warm comfortable socks, a good hat, and your sunglasses, as the sun can be bright and strong. Most of the treks in Lhoka are in remote locations, so you may find that the rough and rocky terrain can require a couple of hiking poles to make the trek a little less arduous. Sleeping bag and tent are both essential for trekking, as there are few guesthouses along the treks, and you may want to bring some food for the treks, especially if you are not partial to local cuisine.

At the higher altitudes of Lhoka, you will need to ensure that you have sunblock, even in the winter months, as the sun is bright and strong in the lower atmosphere. Winds can be harsh and chill, especially in the remote areas to the south, and these biting winds can easily chafe your face and lips. Bring moisturizers to counter this, and a light pair of gloves to keep your hands warm in the colder weather.

Lhoka is an amazing area of Tibet that can be visited throughout the year, and which has some of the most awesome attractions. Known as the cradle of Tibetan civilization, this is where the modern Tibetan people began, and then spread out across the plateau more than 2.5 millennia ago. If there is one place you visit in Tibet this year, then it should be Lhoka and Tsedang, the birthplace of the Tibetan people and the place where the ancient Tibetan Empire first began.

0 Comment ON "Tsedang Weather and Climate: when to visit Lhoka at the right time?"