Tsedang Transportation: how to travel easily in Tsedang and beyond

Known as the cradle of Tibetan Civilization, Tsedang is the political, economic, cultural, and transportation center of Lhokha Prefecture of Tibet. Transportation to Tsedang from Lhasa has improved greatly with the development of Tibetan tourism in recent years. The location of such amazing sites as Samye Monastery and the former Royal Palace of Yumbulakang, Lhoka is the area of Tibet that was first inhabited by settled farmers and villagers, rather than the nomadic peoples that wandered the plains of the plateau, following the grazing for their herds of yaks.

Variously known as Tsethang, Zedang, and Zêtang, Tsedang has been the capital of the Yarlung region since the time of the ancient Tibetan Emperors, and has long been a city of great importance in Tibet. The first Buddhist monastery in Tibet, Samye Monastery, was founded nearby by the Tibetan King, Trisong Detsen, in around 779 AD.

Tsedang, the administrative center of Lhoka, lies in the northern area of the prefecture, on the banks of the Yarlung Tsangpo River. Known in Chinese as Zedangzhen, Tsedang is located in Nêdong District, the only district in the prefecture, along with 11 counties. The city, which is the fourth largest in Tibet, lies around 75 kilometers from Lhasa, the Tibetan capital, as the crow flies. However, if you are traveling by road, then you are looking at a distance of around 160 kilometers. Geographically, the town is located close to the flanks of Mount Gongbori, the location of many ancient ruins, some of which date back more than 2,000 years.

How to Get to Tsedang by Air, Road or Train?

Get to Tsedang by Flight

Lhasa Gonggar Airport is located at Gonggar county of Lhokha Area, about 98km south of Lhasa City. The Gonggar Airport operates flights from/to many inland cities of China, like Chengdu, Beijing, Shanghai, Chongqing, Xian, Xining, Guangzhou, Kunming, Chamdo and Nyingchi. The airport’s only international air route is the Kathmandu-Lhasa flight. Check all flights to Lhasa, Tibet. Our local Tibetan tour guide and driver will pick you up on time and escort you to your hotel in Lhasa. It’s highly recommended you to spend the first few days in Lhasa for better acclimation before traveling to Tsedang, Lhoka.

Get to Tsedang by Road

Getting to Tsedang by road is not as hard as it may look, based on the map route. While it may be 160 kilometers from Lhasa to Tsedang, and while the route may appear to go well out of the way to the west before turning east to the town, there are plenty of transport options for road travel. 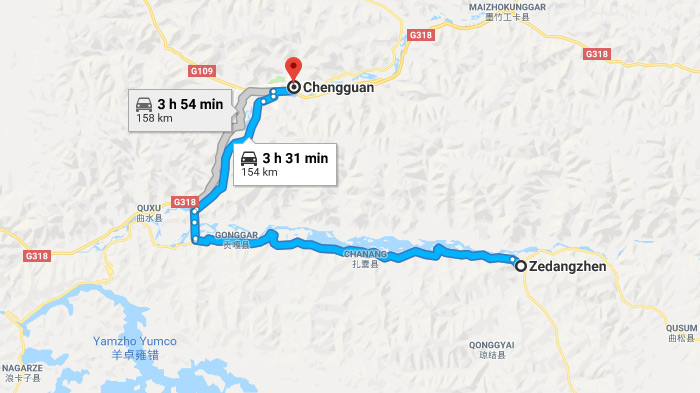 Lhasa to Tsedang by bus (road distance: 160km)
Buses do run to the town, mostly from the Lhasa Gonggar International Airport, which lies in Gonggar County of Lhoka. To get to the airport from Lhasa, you can get a bus from Jokhang Square, which runs directly to Tsedang. However, there is only one bus per day each way, which departs from Lhasa at around 8:00 am and arrives in Tsedang at around 12:00 pm. Fares for these direct bus tickets are usually around 50 yuan per person. All buses from Lhasa to Tsedang go via the Gonggar Airport.

Travel to Tsedang with Tibet Vista’s tourist car (road distance: 160km)
The final alternative for getting to Tsedang by road is by car. While international tourists are not permitted to hire a car and drive to Tsedang, Chinese tourists do have that option, and can rent a car in Lhasa to get to Tsedang, which takes around 3 hours. For those international tourists wanting to make the trip to Lhoka’s administrative center, you can make the arrangement with our Tibet travel guru to include it in your tour itinerary, and our guide and driver will take you there.

Get to Tsedang by Train

Currently, there is no rail link to Tsedang and Lhoka. However, once the Lhasa-Nyingchi section of the Sichuan-Tibet Railway opens, traveling to Tsedang by train will be possible. The proposed Lhasa-Nyingchi section of the line from Chengdu to Lhasa is already under construction, and is expected to open sometime in 2021. The route of the railway to Nyingchi will follow the course of the Lhasa River to Quxu, and then heading east, following the Yarlung Tsangpo River across the northern area of Lhoka, through Gonggar and Chanang to Tsedang and beyond. The new route is expected to cut the travel time to Nyingchi to just 2-3 hours, which means getting to Tsedang should take a little more than an hour by train from Lhasa, and around 2 hours from Nyingchi.

How to Travel in Tsedang

Hire a taxi in Tsedang

If you are traveling around in Tsedang, then you do have the option to hire a taxi to take you to the various sights of the district, including Samye Monastery and Yumbulakang Palace. Taxis normally have a pricing schedule for trips within the city itself, and have their own set prices for traveling to the various attractions in the area. When hiring a taxi, it is best to agree on the price before you ride, or you may end up paying an amount that you did not expect.

The other option for tourists to Tsedang is to take the provided vehicle for your Tibet tour. All international tourists to Tibet are required to be on a pre-arranged tour, which includes a guide and driver, as well as a private vehicle. International tourists are also not permitted to travel alone in Tibet, outside the main area of the city of Lhasa, so getting to Tsedang and touring the area must be as part of an organized tour. 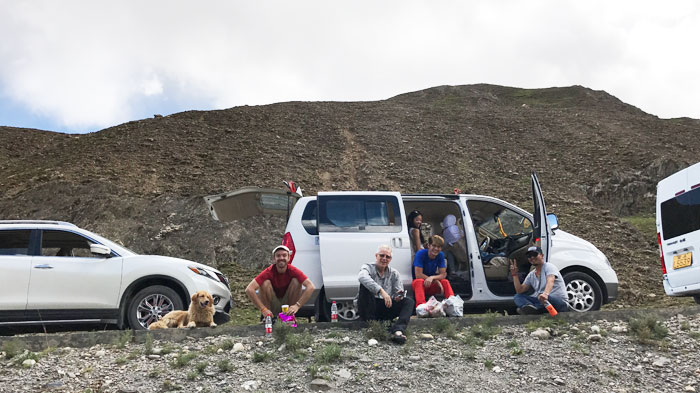 Our clients were taking our tourist vehicle to visit Tsedang.

How to Tour around Tsedang and Surroundings

As the transportation center of Lhoka, Tsedang is ideally located to get you to just about anywhere in the prefecture with the minimum of concerns. Routes from Tsedang lead out to all 11 counties in the prefecture, and the roads have been much improved due to the increase in tourism in Lhoka in recent years.

Formerly the first palace in Tibet, first built in the 3rd century BC for the first King of Tibet by the local Bon followers, this ancient structure has been destroyed and rebuilt several times over the centuries, and was the original seat of the Tibetan King, Songtsen Gampo, before the Tibetan capital was moved to Lhasa in the 7th century. The closest of the major attractions to the town of Tsedang, the Yumbulakang Palace lies just 12 kilometers to the south of the center of Tsedang. Driving there takes around 20 minutes, and follows the S202 Provincial Road south out of the city.

Renowned for being the oldest Buddhist Monastery in Tibet, Samye Monastery lies to the northwest of Tsedang, on the northern side of the Yarlung Tsangpo River. A distance of just 25 kilometers, the road distance is around 40 kilometers, as you will need to cross the river before traveling west to Samye. 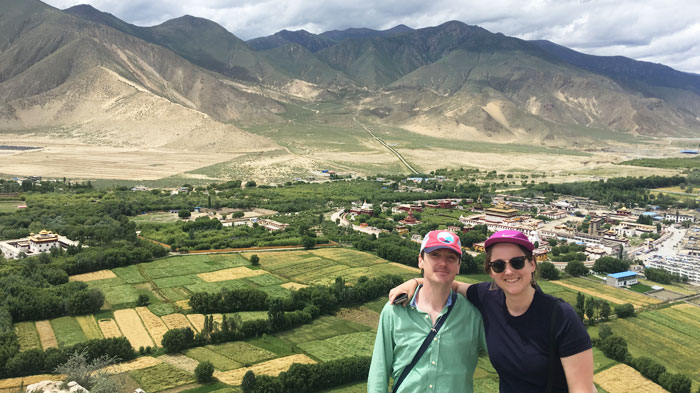 Capturing a panoramic view of Samye Monastery in Tsedang, Tibet.

From Tsedang, the route takes you north along the S306 Provincial Road and then across the Zedang bridge, continuing up to meet the S302 Provincial Road to head towards the monastery. The 302 road follows the Yarlung Tsangpo River Valley all the way to Sangyezhen and the Samye Monastery. While the distance may be relatively short, the minor roads that you will travel along make the journey one that takes around 1 hour 50 minutes.

Traveling from Tsedang to Lake Yamdrok is an easy trip along a good highway, as it is part of the main route to the airport at Gonggar County. The route follows the S101 Provincial Road heading west, towards the Lhasa Gonggar International Airport, passing through Chanang, Jiedexiuzhen, Gonggar, Dagaxiang, Jiangtangzhen, and crossing the Gampa La Pass. The route covers a distance of around 161 kilometers, and takes around three hours. Yamdrok Lake lies around 113 kilometers to the west of Tsedang, as the crow flies, and is one of the Great Three Sacred Lakes of Tibet, along with Lake Manasarovar and Lake Namtso.

Lying as it does in the stunning Lhoka Prefecture, Tsedang is the ideal place to center for touring around the area of this beautiful part of southern Tibet. Its unique location gives you great access to all of the major tourist attractions in Lhoka, and the improved road network means that it is not hard or long to get to most of them.

Tsedang is also located in one of the most stunning areas of Lhoka, along with the banks of the Yarlung Tsangpo River Valley. The area also has the distinct advantage of having a milder climate than in most of the rest of Tibet (with the exception of Nyingchi), which makes Lhoka an amazing place to visit all year round. If there is anywhere in Tibet that you should try and get to, then Tsedang and the surrounding area, which are less popular with international tourists still, is the ideal location.

0 Comment ON "Tsedang Transportation: how to travel easily in Tsedang and beyond"