Samye Monastery History: unveil the mystery of the first Buddhist site in Tibet

Built in the 8th century, Samye Monastery was the first true Buddhist monastery to be built in Tibet, and lies in the stunning area of the Yarlung Zangbo River Valley in Tsedang County of Lhoka Prefecture. Lying around 51 kilometers from Lhasa as the crow flies, the monastery is 121 kilometers from the Tibetan capital by road, and takes around 2 hours to drive.

The monastery is believed to have been constructed in around 775-779 AD, under the patronage of the 38th king of Tibet, Trisong Detsen, and was constructed as a way to revitalize the failing Buddhist religion on the plateau. Buddhism had taken a downturn since the death of the 33rd king of Tibet, Songtsen Gampo, who first introduced it to the region in the 7th century.

As the first monastery of Tibet, Samye is an important monastery for the Tibetan Buddhist culture, as it marks the true birth of Tibetan Buddhism, and was the site of the decisive debate that installed the Indian version of Buddhism as the national religion, instead of the Chinese Chen Buddhism that had previously been favored by Songtsen Gampo after the marriage to his wife, Princess Wencheng. For any explorer of the unique Tibetan religious-culture, this is a must-visit destination in Lhoka Prefecture and the monastery lies in a stunning location on the northern bank of the beautiful Yarlung Zangbo River.

The Legends and Buddhist Gurus of Samye Monastery

According to the ancient legends that surround the Samye Monastery, a building was originally attempted to be constructed on the site by the Indian monk, Santaraksita, who found the site of the monastery to be auspicious during his journey through Tibet to promote Buddhism in the region. However, the building was not completed, as parts of it would collapse for no reason during the construction. The local workers believed there to be a demon that was hampering the building of the Buddhist monastery, and it was never completed.

When the Indian sage, Padmasambhava, visited the area of the monastery, he discovered the demon hampering the construction, and through a performance of the Vajrakilaya dance and the use of yarn to create the Endless Knot, was able to subdue the demon, and allow the monastery to be completed. Because of his triumph over the demon, the monastery was marked as the foundation of the first school of Tibetan Buddhism, the Nyingma school od tantra-centric Buddhism that was taught by Padmasambhava.

It was also at Samye Monastery that Padmasambhava first drew signs on the ground to invoke his powers for the tantric dances, which were watched by the local lamas of the region. These dances were later emulated by the monks of the Samye Monastery, and were soon spread across the entire Tibetan empire. The dances are still performed across all the areas where Tibetan Buddhism is found, to commemorate the victory of Padmasambhava over the demon at the Samye site. Nowadays, they are widely known as the Cham Dances. 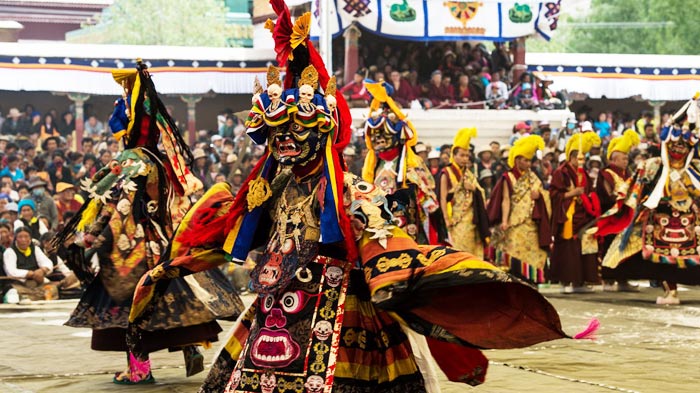 Monks are performing Cham Dance during the Samye Monastery Festival.

The monastery was heavily influenced by Indian Buddhism, and this caused a disagreement to arise between the understanding and translations of the Indian scriptures against the Chinese Chen Buddhism that was originally disseminated in Tibet. In the year 792, to decide on which form of Buddhism was right for the Tibetan people, King Trisong Detsen declared that there would be a debate held at the original monastery building to decide on which interpretation of the scriptures was right.

The debate was to be held between the student of Santaraksita, Kamalasila from the Indian Nalanda University, and the Chinese monk, Moheyan, from the East Mountain Teaching of Chen Buddhism in China. The position of Moheyan was that enlightenment could only be achieved by the total emptiness of the mind, while Kamalasila argued that enlightenment could only be attained through practice and merit. The Indian argument of practice and merit won through, and began a new era for Tibet. Indian Buddhism was declared as the official religion of the kingdom, and that it would be the Middle Path beliefs that would be followed. It also meant that the remainder of the monastery would be built in the style of Indian temples.

An important monastery for the reintroduction of Buddhism, it was designed based on the Odantapuri, a Buddhist Mahavihara, which lies in what is now the Bihar State of India. It became such a figure in Buddhism in Tibet, that it was used as a model for the Puning Temple in Chengde in Hebei Province of China, which was built by the Qianlong Emperor of the Qing Dynasty in the late 18th century.

The design of the monastery is based around the sacred Mandala, the map of the world according to the Buddhist scriptures. The central building represents the legendary Mount Meru, the center of the universe in Tibetan Buddhism, and around it four large chortens were built, which represented the island-continents that lay in the oceans that surrounded Mount Meru. Around each of these halls were built smaller halls and chortens, which represented the islands that lay in the oceans around the continents, which included the four colored chortens that lie at the four corners of the world, east, west, south, and north, and are colored black, green, white, and red. 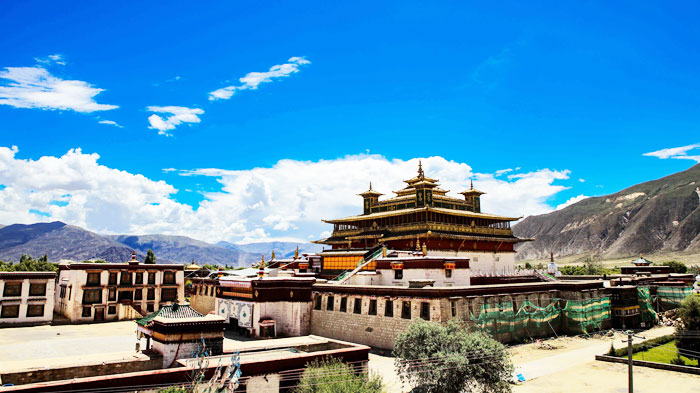 The main hall at the center, known as the Utse Hall, was originally constructed over four floors, with a huge golden roof topping it off, in accordance with the Buddhist doctrines. The hall was built to include all three styles of Buddhist architecture – Tibetan, Chinese, and Indian - on every floor. Composed of several units, including a central Buddha Hall, sutra halls, side halls and passages, and a circumambulation passage, it is the core of the entire monastery and the center of everything. Enshrining the statue of the Sakyamuni Buddha, the circumambulation passage was designed so that the pilgrims and monks could kneel or prostrate at certain points in front of the statue, within sight of it and the other myriad of deities that are held in the central hall.

The wall around the monastery is considered to be the earthly representation of the legendary Mount Chakravada which symbolizes that the monastery is protected by an invincible iron fence. Constructed in differing heights and sizes, the sections of the wall are flawlessly arranged to be in complete harmony, as the sutras dictate. The monastery was also originally constructed with 108 temple buildings, an auspicious number in Buddhism, which matches the number of beads on the Tibetan Buddhist rosary which is used for praying and meditation.

The School of Samye Monastery

Samye Monastery was the first monastery in Tibet of the original school of Tibetan Buddhism, the Nyingma School. The oldest of the four schools of Tibetan Buddhism, which includes the Kagyu, Sakya, and Gelug schools, Nyingma literally means “ancient”, and refers to the ancient translations of the Buddhist scriptures, often referred to as Ngangyur in Tibet. Founded on the first full translations of the original Indian Sanskrit texts, which were all translated in the translation hall of the monastery, the Tibetan alphabet and grammar was created in the 8th century to accomplish this massive endeavor.

The Nyingma school is based on the hidden termas and incorporates many of the local practices of the former Bon religion of the plateau, including some elements of Shamanism. All the different lineages of the Nyingma school throughout the ages can trace back to the Indian master, Padmasambhava and the Seven Examined Men. 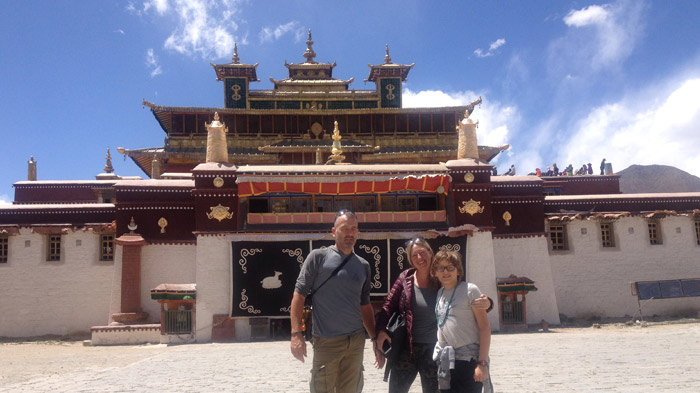 A tour to Samye Monastery can help you learn more about Nyingma Buddhism.

The practice of Nyingma Buddhism was originally spread orally among the monks and lamas of Tibet, using a network of lay teachers that would instruct the people and the monks on the practices of Buddhism. It was the translation of the Indian Sanskrit texts that brought about the advancement of written scriptures in Tibet, many of which are still used today. The monks and nuns of the Nyingma school were also not originally celibate, a practice which developed man centuries alter, along with the practice of using reincarnations of the spiritual leaders.

The Nyingma School of Tibetan Buddhism dominated the region for centuries before splits in some of the beliefs, which began with the introduction of tertons, or “treasure revealers”, and the revealed Terma texts that were “hidden” and found by the tertons. Many of these texts appear to be of original Tibetan construction, while being said to have been written in the past by Padmasambhava and hidden for centuries.

Since the beginning of the establishment of the three major classes of the Nyingma literature, several other schools of Buddhism have arisen in the region, the most recent being the Gelug School in the 14th century, founded by Je Tsongkhapa from the Sakya School.

This ancient and historic site is the center of the beginnings of Buddhism in Tibet, and is an important monastery to visit if you are interested in the history of the plateau’s main religion. It also shows how the ancient Bon religion of the region was incorporated into many of the practices of Tibetan Buddhism in the early days, and is an ideal place to visit to learn more about the history and religious influence of Buddhism on the Tibetan people. Part of the culture of Tibet, this oldest of monasteries in the cradle of Tibetan civilization is a must-see site for anyone visiting Tibet.

0 Comment ON "Samye Monastery History: unveil the mystery of the first Buddhist site in Tibet"