Vulture, the Sacred Bird of Tibet

The enigma of Tibet has remained skillfully embedded in its cultures and popular beliefs. The various traditions that Tibetans follow are quite quizzical to the outer world, especially to the foreign lands. However like every other civilized countries, Tibetans hold strong to their beliefs, ethnicity and traditions. Like many other mysterious regulations and traditions of Tibet, one such is its consideration of the scavenger bird, Vulture, as a sacred bird. 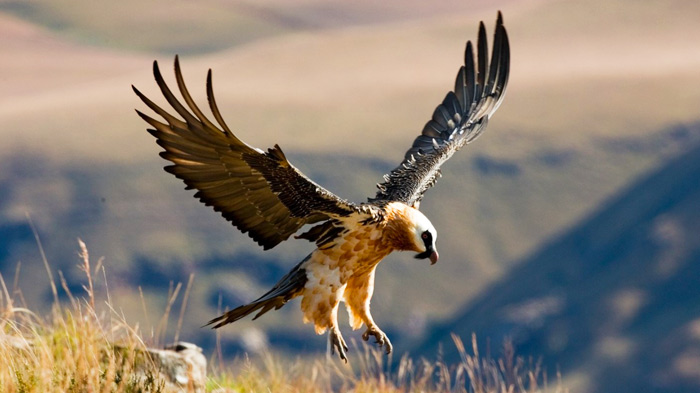 Vulture, the Sacred Bird of Tibet

In Egypt also, same enigmatic practices are observed where the Egyptians worship the fox, vulture and even snakes as their preachers and Gods. They have an amalgamation of the human body with animal head as their own forms of deities. Likewise in Tibet also, the scavenger bird is considered to be holy. While majority of the nations despise the bird as being untidy, unruly and wild, Tibetans hold a great respect for it.

In this article a detailed demonstration has been provided on the Tibetan reverence for their sacred bird, the vulture, and the other important information that will interest any wander lust to tour Tibet besides the place’s other charms like the scenic beauty and the hiking facilities.

Unique Habitat of Vulture in Tibet

Tibetan sacred bird, the vulture, falls mainly into the category of the bearded vultures, the largest scavenger birds in Eurasia. There is a scientific as well as a beautiful history behind Tibet’s consideration of vulture as its sacred bird. As vultures do not usually prey on living animals and instead live by the body of dead living beings, they are considered to be sacred. 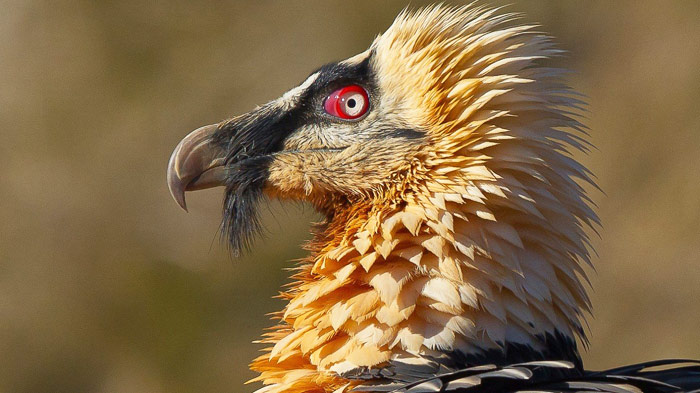 Moreover they are considered to be the protector and the cleaner of the country because of which they are hold holy. In Tibet, usually the bearded vultures also known as the Himalayan vultures abound the region. These species are prone to be founded in regions having high cliffs, alpine atmosphere, lofty mountains and regions having crags and precipices. They also consider the nearness to meadows, grasslands and alpine pastures as their important breeding place as these regions provide the easy availability of food for them. 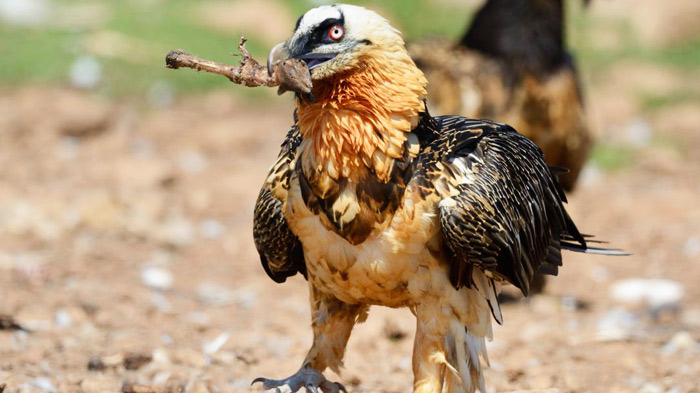 The Cleaner of the Country

In Tibet, all these requirements are available to provide the vultures with excellent breeding sites. Many Tibetan regions like the regions of Nyingchi and Shannan are marked by remarkable alpine meadows. Also in Tibet, due to excessive snowfall and harsh weather in winters, many animals die. This occurs especially in the areas near trans-Himalayan range, near to the biggest peak, Mount Everest. The carcasses of these animals become extremely difficult to dispose off. 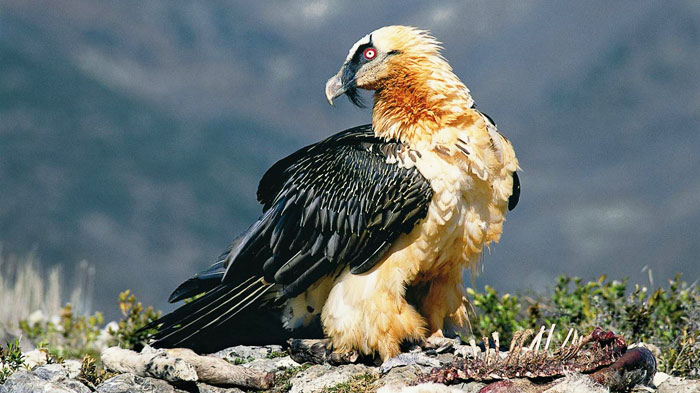 Vultures help human to get rid of the corpse of animals.

Another facility in Tibet is that the Himalayan Mountain serves as the water source of the rivers throughout the South and East Asia, like Yellow River and Yangtze River of China, the Ganges River of India. These rivers are Asian’s main drinking water source. But it is impossible for human to get rid of the corpse of these animals which might pollute our source of life. Thanks to the vultures on the Tibetan plateau, we can continue our life and make great progress in our life. 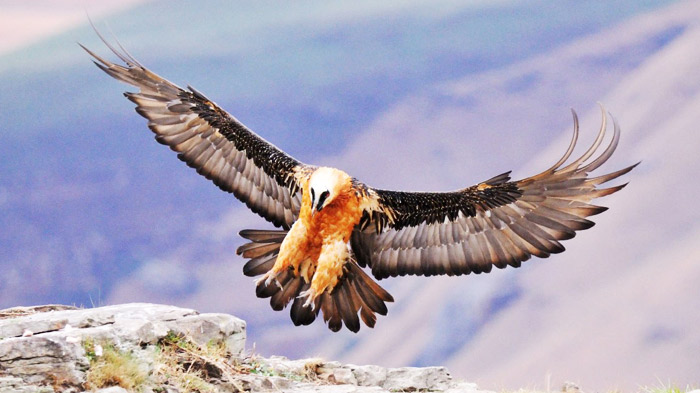 Vultures made their habitats in high mountains.

Hence the vultures have made their habitats in the Tibet plateau, especially in the regions of high mountains where there is not only easy availability of food, but also water and perfect atmosphere. As they have found fulfilled habitat in the hilly areas of Tibet, similarly the Tibetans are finally relieved to find a disposal method of the carcasses of the dead animals. They simply dispose them near the habitats of the Himalayan vulture where the vultures feed on these animals and help in their disposal. In this way, they eventually keep the region of Tibet clean, earning respect as the sacred bird of Tibet.

The Tibetan sacred bird, vulture, is the special species of the bearded vultures. The name has been derived from the soft tufts of feathers below their strong beaks that look like beards from the distance. The vultures are characterized by sexual dimorphism, with the females being larger than the male. The whole species comprise of a very large and heavy vultures having 4.5 to 7.0 kg of weight. The wingspan is very large having an extension of almost about 231 to 283 cm. The length of these birds may be about 94 to 125cm. 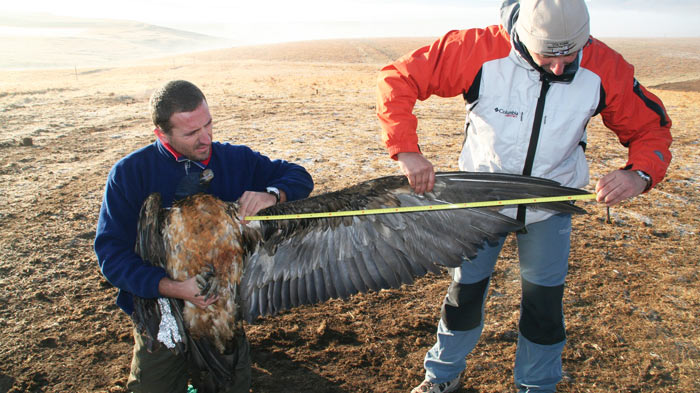 The wingspan of vultures is very large.

The male adults are usually grey in color and the females are slightly lightly coloured. The coloration of these birds gradually changes from bluish grey to orange owing to their bathing in iron-rich waters of the Himalayan ranges. They are totally bald in the head and are characterized by sinewy and sharp talons. There are variations even amongst this particular type of vultures. The variations may include the presence of feathers in the head, or the feature of having joint eye-patches and streak faces. Sometimes variation in colourations is also observed. In the Himalayan Vulture, the beards are absent. 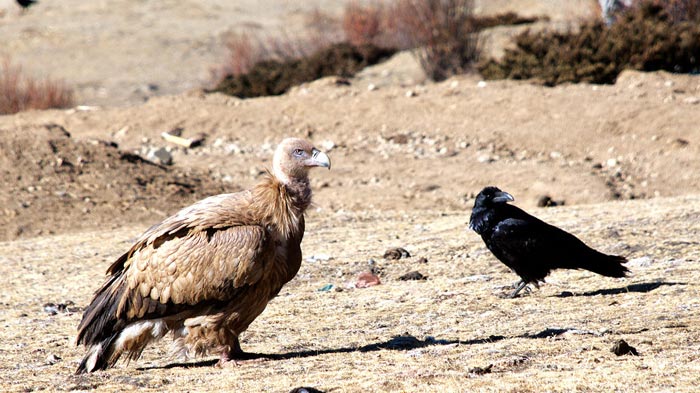 The coloration of vultures gradually changes from bluish grey to orange.

Overall these vultures are characterized by extremely hard and sharp beaks and talons. In their full flight, the back feathers are often seemed to protrude like the form of tail that often draws comparison with the legendary birds Griffons, characterized by lion body and tail and vulture head. Hence they are also sometimes known as Tibetan griffin birds or griffon vultures. The Himalayan vultures of Tibet are generally known as the Griffon birds. 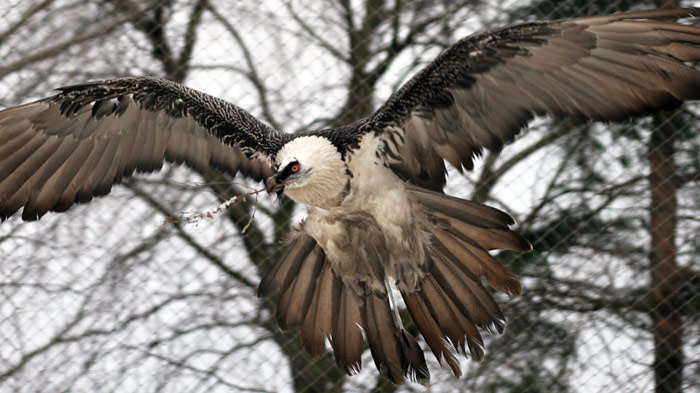 The back feathers are often seemed to protrude like the form of tail.

The diet of the sacred bird of Tibet mainly comprises of the carcasses of small birds and animals, sometimes even large animals and human corpses. The main item in their diet is the bones of the carrions of the animals. It is said that they derive nutrition out of the bone marrows. The bones are either eaten full or they are broken by the beaks. They also feed on tortoises and even live birds and mammals. Vultures, because of this reason, mainly choose their habitats against the meadows, in the high remote cliffs and hills, because of the easy availability of the dead bodies of the animals and even living animals. They usually do not compete with each other for the food and wait patiently. They even sometimes feed on the urban wastes when food is scarce.

Vultures play important roles in Tibetan festivals known as Sky-Burial. The involvement of the vultures in this unique and exotic Tibetan festival includes the popular belief of reincarnation and after life after death. 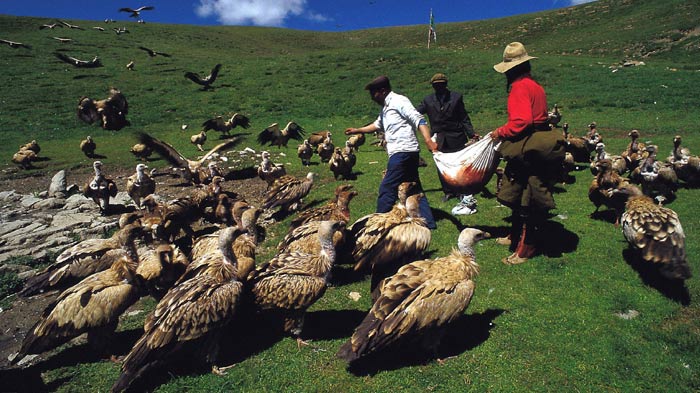 Vultures are waiting for their food at the sky burial site.

In the festival of Sky Burial, a human corpse is offered to the vultures. The corpse is placed on the mountain tops, near the abodes of the vultures, indirectly luring them to feed on the corpse and provide the soul of the dead person a chance of rebirth, according to the popular Tibetan belief. According to the Tibetans, the vultures are the disguised ‘Dakinis’. To the Tibetans, Dakinis are angels; hence offerings to the angels are thought to be the sacred way of the end of one life. Dakinis will take the soul into the heavens, which is understood to be a windy place where souls await reincarnation into their next lives. 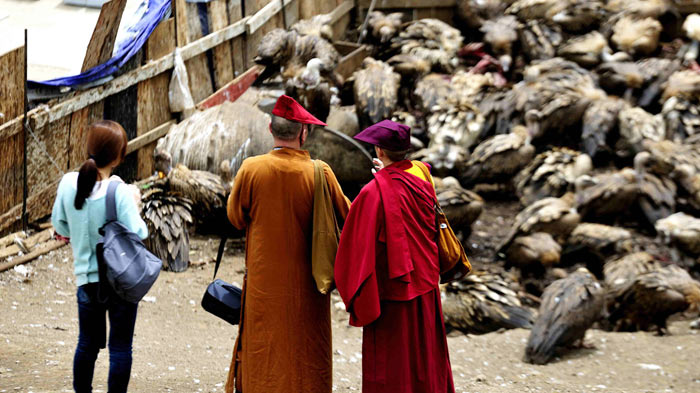 In the festival of Sky Burial, a human corpse is offered to the vultures.

Tibetans believe that Dakinis or the angels or the ‘Sky Dancers’, by feeding on the soul actually transports it to the sky or heaven where the soul gets a chance of reincarnation. This practice is said to be the Vajrayana Buddhist culture. It is considered to be a very ancient practice in Tibet. Even there is a book known as the Bardo Thodol or the Book of the Dead where a detailed recording of this custom can be found. However in the book that records its ethnicity bank to twelfth century has said that in this process the body is cut up into pieces according to the instruction of the Lama or the writer of the book.

Process of Sky Burial in Tibet 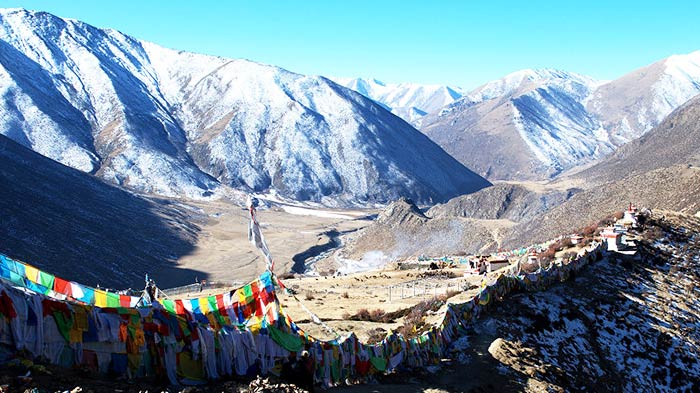 Most of the time the whole body, without any dissection, is provided to the vultures. After the vultures have completed feeding on the flesh, the remaining bones are acquired and broken into small specks. Thereafter these bone specks are ground with tsampas and are provided to the crows and other scavenger birds that have waited to feed on the body. 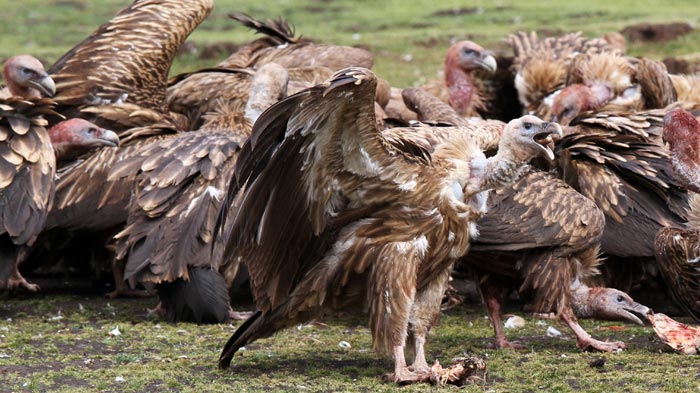 Vultures are feeding on the body.

In some cases, the body is distinctively dissected and are grounded together forming a pulp. This pulp is mixed with the tsampa and is provided to the vultures. At another times, the internal organs are removed as also the hairs. The hairs are sometimes preserved in the monasteries. The organs after processing are fed to the vultures. In this way, the sacred festival is carried out with the notion of providing relief to the soul and help in its reincarnation. In some other cases, the festival is chiefly carried out to save the small birds and animals from the rage of the vulture. By offering the corpses, the people tend to save the smaller and weaker animals. It is said that Sakyamuni Buddha once sacrificed his flesh to protect a dove from a vulture. It is from that tradition that the offering of the corpse to the vulture has begun in some regions.

As has already been said that the most favourite habitats of vultures are high cliffs and remote areas where the precipitation is very high and the availability of food is also easier. Basically on considering these factors the whole of Tibet, especially the mountainous areas are the best for the vultures. 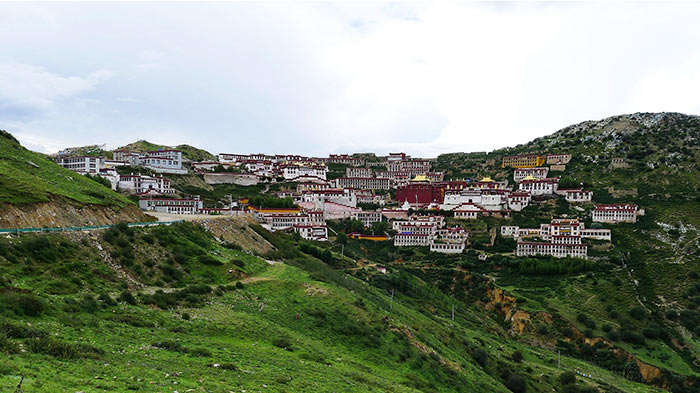 Drigung Til Monastery, a famous sky burial site in Tibet

But in Tibet also there are certain places where the vulture population can be found. The bearded vultures can be found in the town named Drigung, located in the remote Maizhokunggar County in Lhasa. However the Himalayan Vulture or the Griffon vultures are found in regions like Drigung and Damshung towns of Tibet.

Insider tips: In fact, sky burial is a holy ritual, forbidden to be seen to outsiders. Normally, tourists can't watch it in Tibet since it is a taboo.