Known in Tibetan as "Black River", Nagqu is the largest region in Tibet, with almost 47 percent of the total land area of the region, yet with less than 20 percent of the population, most of whom are nomadic herders. And lying in the north of Tibet Autonomous Region, Nagqu is a sparsely populated area with more animals than people. An area of unspoiled grasslands and protected wildlife, this is Tibetan culture at it's most rural.

The natural landscape and features have formed their own distinctive tourist attractions in the region, which includes the unique culture and folk customs of the people. Colorful religious legends pervade the area, associated with the various mountains, rivers, and lakes, all of which have retained their natural appearance through limited tourist interaction.

An area of infinite beauty, Nagqu has one of the most unique landscapes in Tibet, with its vast Changtang Grasslands surrounded by mountains on all sides, and stretching across the entire plateau, from Qinghai in the east to Ngari in the west. Lying on the northern edge of the plateau, close to the edge of the tectonic shift that created the plateau in the first place, Nagchu with an average altitude of around 4,500 meters is one of the higher areas of Tibet as well as one of the harshest on the plateau. 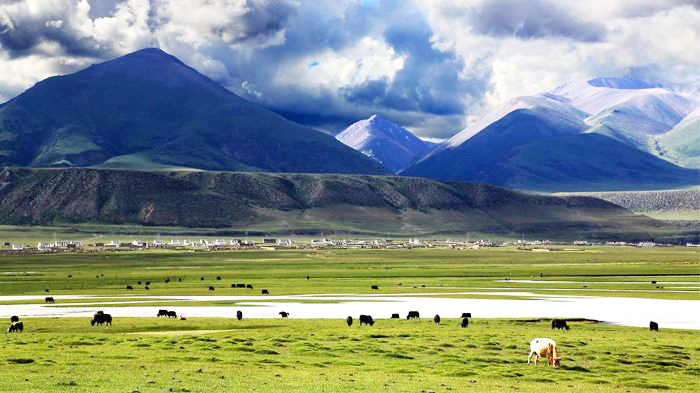 With an area of over 334,000 km2, Changtang Nature Reserve is the second largest nature reserve in the world.

Lying within the sub-frigid zone of Tibet, Nagqu experiences extremes of cold and wind, and is an area prone to extremely dry air and violent storms. Throughout the year, there is no period where there is no frost in the prefecture, and the land is under a state of semi-permanent permafrost, even in the summer months.

The area has two main seasons, wet and dry, and the dry season runs from November to March, with the air being dry and arid. The typical sub-arctic climate means that, through the dry season, it is also at its coldest, with temperatures dropping to as low as -21 degrees in January. Even the daytime temperatures in the dry season are low, with highs of around -3 degrees during the day in January, and staying below freezing until around mid-March. 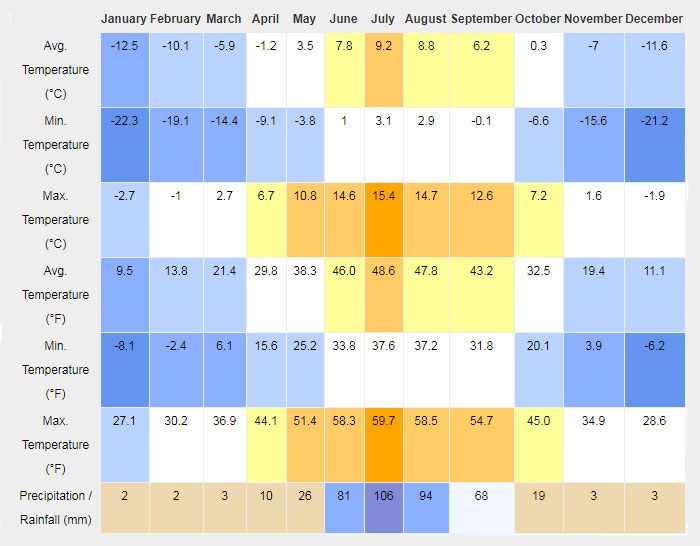 From May to September, it is the rainy monsoon season, though most of the rain falls in late July and August. Around 80 percent of the rainfall comes within the period from May to September, and during this period, which is also the growing period for the farmers, the grasslands are an emerald green color and filled with grazing yaks and sheep. Temperatures are much lower than the rest of Tibet, with daytime highs of no more than 15 degrees, and nighttime lows that range between -3 in May to around 3 degrees in July, the hottest month of the year.

The horse racing festival is just one of many that are held throughout the year in Tibet, but none is as popular and expansive as the Nagqu Horse Racing Festival, held on the Changtang Grasslands every year in August. The festival can last anywhere from five to fifteen days, and is the most extravagant of all the horse racing festivals in the region. A time for the local Tibetans to get dressed up in colorful local costumes and spend several days enjoying the festivities of the festival, many families travel hundreds of kilometers to visit the festival, setting up their tents in the hundreds around the horse racing track. 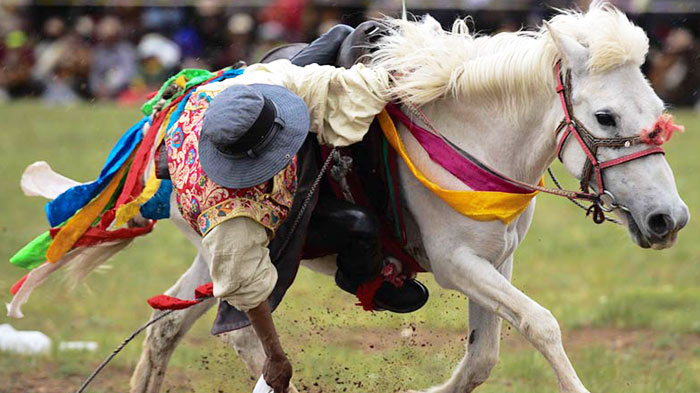 Nagqu Horse Racing Festival is the most magnificent of all horse racing festivals in Tibet.

August is a great time to visit Nagqu for the horse racing festival, as it is when the lush grasslands are at their greenest, and the verdant prairie is covered with small summer flowers that grow in the grassy landscape of the prairie. An ideal time to visit to see the most colorful aspects of this northern Tibetan culture, most of which have descended from the ancient Zhuodai culture of nomadic tribes that first inhabited this region of Tibet more than 5,000 years ago.

The festival normally starts around the 10th of August in the western calendar, and is the most magnificent occasion in the north of Tibet. Tens of thousands of herdsmen from all across the region head for Nagqu City. The area turns into a town of tents, with tent homes and shops, selling and bartering their goods for the whole period of the festival. The colorful tents, most decorated with images of Buddha, stretch for miles on the grasslands, smoke rising from the tops of the tents as the sun drops on the horizon.

How to adapt to Nagqu climate and altitude for newcomers?

The climate in Nagqu is arid for the period from November to March, and not much better from May to October, when the rains have set in. While the climate of the summer months is wetter, there is still a dryness to the air that cannot be taken away by the monsoon rains. The area only sees around 300 millimeters of rain a year, and even in the wettest months, the daytimes are dry and clear.

As an area that is always cold, with high temperatures of only 15 degrees in the summer months, adapting to the intensely harsh climate of the area is hard for tourists, though it is not as bad if you are only traveling there for short periods. The most important thing to adapt to is the altitude, as this area of Tibet has a much higher average elevation, with most of the area reaching altitudes of more than 4,500 meters above sea level. If you are traveling from Lhasa, you should be acclimatized to the height of the capital before you travel north, or you will be in a much higher risk area for getting altitude sickness.

Even for those that are properly acclimatized to the lower altitudes, you should remember to acclimatize again once you arrive in Nagqu, as the higher elevation can increase the risk once more. Excessive exercise and strenuous activity should be avoided for the first few days, and plenty of rest, water, and healthy food can help prevent altitude sickness in the area. And since it is the time of the festival when most tourists visit the area, it means you can relax and enjoy the delights of the grasslands without the need to exert yourself. Just let the horses do all the strenuous exercise, they are more used to it.

What to pack for Nagqu tour and travel?

Knowing what to pack for a tour to Nagqu in northern Tibet can be a little harder than packing for anywhere else. You need to take into consideration the climate of the area, which is pretty unique, and can be harsh even in the summer months. You will need to take plenty of clothes to stay warm, as the area is pretty cold throughout the year, with daily temperatures never getting above 15 degrees. Layers are better than thick jackets and sweaters, and can help you stay warmer. It is also easier to warm up or cool down by peeling off layers of thinner clothes. 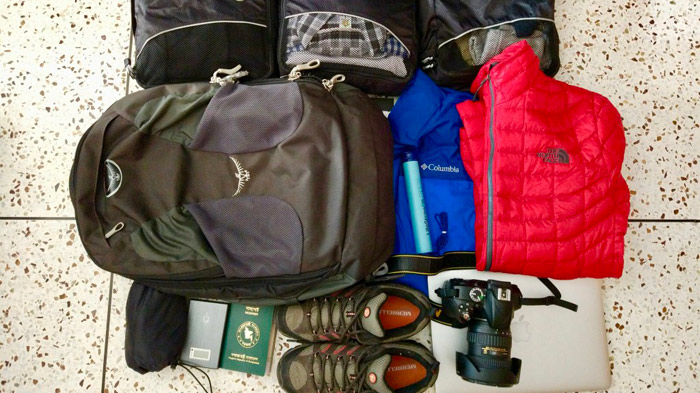 A sample of basic packing items for Nagqu tour.

Rugged boots, preferably hiking boots, are a necessity when traveling on the grasslands of Nagqu, as there are few good roads to walk along. Even areas off festivals and monasteries in the north of Tibet have rough ground and dirt or gravel tracks for roads. Take thick socks as well, to keep your feet warm in the boots, or you may suffer from a little frostbite.

While the sun may not be hot, it is still strong, often stronger than most of the rest of the plateau, the atmosphere is much thinner on the prairies of the north, and the air has less oxygen content, which means the UV rays of the sun are more likely to burn the skin and cause sunstroke. A good 30-50 factor sun cream is a necessity, even in the winter months, and a hat and sunglasses are also essential, to protect your head and eyes from the intensity and brightness of the sun.

For travelers to the region, it is a good idea to bring along a face mask, to help protect yourself from the dry, arid winds and air of Nagqu. The air can leave your throat dry and sore, and the harsh winds of the prairies can chap lips and dry skin to cracking. The wind is always cold, mainly due to the higher altitude and colder climate of the area.