Lhasa Valley: the most enchanting valley on the roof of the world

Located in the south of the high-altitude Tibetan plateau, the Lhasa Valley is one of the most stunning valleys in Tibet. The Lhasa River, also known as the River Kyichu, flows through the center of the valley to the sough of the city of Lhasa, the Tibetan capital. One of the major tributaries of the Yarlung Zangbo River, which is the upper section of the Brahmaputra, the river runs in a zig-zag course, passing through the valley to enter the Yarlung Zangbo further downstream near the town of Quxu, around 10 kilometers north of Lake Yamdrok.

In its upper reaches, the valley is narrow, fed by the three converging rivers known as the Phak Chu, the Phongdohla Chu, and the Reting Tsangpo. Around 450 kilometers long, the Lhasa River Valley gets wider as it heads west, with one of the widest points being where the city of Lhasa is located. Surrounded by the dominant peaks of the Nyenchen Tanglha Mountains, the area around Lhasa is a marshy part of the valley, which supports a wide variety of bird life and wildfowl, many of which are migratory birds that head for the plateau during the summer months, moving further south as the winter weather turns colder.

Lying in the valley is the Tibetan capital, built on what was once part of the marshland that was reclaimed more than 1,300 years ago. The area of the city is dominated by three natural hills, Marpori (Red Mountain), Chakpori (Iron Mountain), and Barmari (Rabbit Mountain).

Altitude and Formation of Lhasa Valley

With an altitude ranging from 5,200 meters at its start to around 3,950 meters at the mouth of the river where it joins the Brahmaputra, the valley is one of the most lush and verdant valleys in Tibet. At its widest point, it is more than 5 kilometers wide, which is where the river runs into the Brahmaputra. 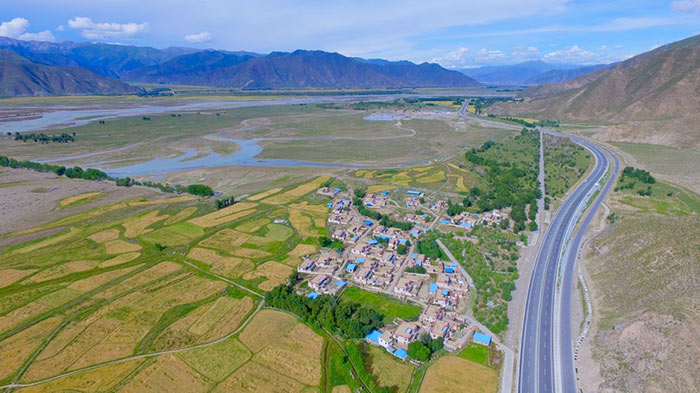 The valley itself was formed more than 50 million years ago, with the lifting of the Eurasian tectonic plate due to the movement of the Indo-Australian plate northwards, which slid under the Eurasian plate, lifting it skywards more than 6 kilometers. Small springs formed on the newly-risen plateau, which found small ripples between the mountains that had been pushed upwards, winding their courses between mountains and mountain ranges. Over time, these small streams joined other small streams, becoming fast-flowing rivers that cut huge channels through the soil and rock of the plateau, creating the valleys we see today.

The Lhasa River valley was similarly formed, starting at the confluence of two rivers in the Nyenchen Mountains to the north of where the Tibetan capital now stands. As the three rivers converged in the narrow valleys in the midst of the mountains, at an altitude of around 4,200 meters, the river followed the naturally formed valley to the west, weaving its way among the high mountains, and eventually changing course to head west around the high spur at the point where the Reting Tsangpo River meets it.

The valley that we see today is much wider than the river that flows through it, suggesting that at some point, the river was much larger and stronger. Caused by the melting snow and ice from the mountains during the end of the ice age that occurred around 2 million years ago, carving out wide valleys and canyons through the high mountain, the Lhasa Valley was slowly formed over time to be the valley we see today.

Weather and Climate in Lhasa Valley

The climate of the Lhasa Valley is variable depending on the season, something that is unique to the Tibetan plateau due to the very high elevation. In the summer months, when the monsoon season starts, the climate is more akin to that of the humid continental climates of northern Europe, with warm sunny days interspersed with moderate to heavy rainfall, mostly in the afternoons and evenings. Temperatures range from as high as 30 degrees during the day to as low as 4-5 degrees at night. 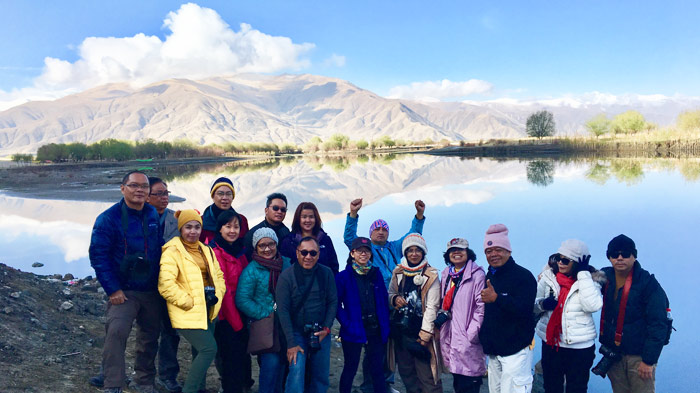 In the winter months, the climate is more of a sub-tropical highland climate, that leaves the land dry and arid, with frosty days filled with long hours of sunshine. Temperatures in the winter can drop to as low as minus 7 degrees at night, with daytime temperatures averaging around eight degrees. For a typical high-altitude plateau climate, this is relatively warm, due to the lower altitude of the Lhasa valley and the fact that the area is more protected by the surrounding mountains. - Check details of Tibet Lhasa Winter Tour Packages

In Lhasa, you may enjoy your visit all year round. However, the temperature differential from day to night, while still being roughly the same as the rest of the year, can leave the nights being quite cold. Nighttime temperatures range from 3 degrees to minus eight degrees, while the days are comparatively warm, ranging from 3-9 degrees.

With it being the location of the Tibetan capital, the Lhasa Valley has a multitude of great attractions. However, the area outside the city has just as many natural attractions as the city has man-made ones.

Inside the city are the more popular tourist attractions, such as the Potala Palace, sitting on the top of the red hill, or Moburi. Built in the 16th century as the center of government in Tibet, it lies on the remains of an ancient fort that dates back to the time of the Tibetan king, Songtsen Gampo. The Jokhang Temple, the most sacred temple in Tibet, lies in the center of the old quarter of the city, and is the end of many long pilgrim trails from across the region. Thousands of pilgrims make the journey to Lhasa every year to worship at the temple, which houses one of the oldest statues of Buddha in the world. 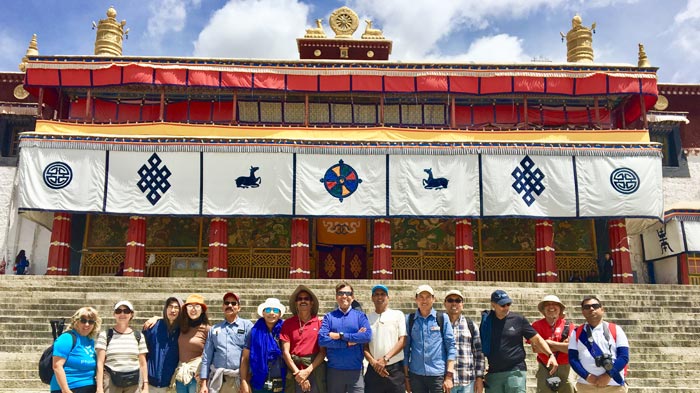 The city also has more than its share of monasteries, including Drepung and Sera Monasteries, two of the main monasteries of the Gelug School of Tibetan Buddhism. Norbulingka, the former center of Tibetan governance under the 5th Dalai Lama, also lies within the city, and has one of the best and largest parks in Tibet. Known as the “lung of Lhasa“ because of the huge number of trees in the park, it is one of the most beautiful places in the area to spend the day with family.

The riverbank itself is one of the most popular attractions for locals, and in the warmer months of summer, it is normal to see families taking a stroll along the river and picnicking on the riverbanks. With its extensive marshlands and wide river plains, the valley is one of the most beautiful examples of plateau wetlands in the world, and has become a major migratory region for some of Asia’s rarest species, including the Ruddy Shelduck and the black-necked crane.

The area is also famous for having the largest urban wetlands in the world, known as the Lalu Wetlands. Lying in the western part of the city, this natural wetland environment has been preserved and kept for the migratory and indigenous species of birds and fish that live there. One of the most stunning aspects of the entire River valley, the wetlands are also a source of oxygen in this low-oxygen high-altitude region. It is the wetland areas of the valley that give Lhasa its higher oxygen content in the air during the summer months.

How to Reach Lhasa Valley

If you are already in Lhasa, getting to the valley area itself is simple, just get your driver to take you south a few kilometers to the river bank. The city of Lhasa lies in the river valley. However, if you are traveling from elsewhere, then it is a long journey to get there.

From mainland China, you can get a flight to Lhasa Gonggar International Airport, which lies to the southwest of the Lhasa valley, near the river valley of the Yarlung Zangbo. Flights run daily from all across China, and take from 2-3 hours to as long as 8-9 hours to get to the airport.

Trains also run from the rest of China to Tibet, from seven gateway cities, which include Guangzhou, Shanghai, Beijing, Chengdu, Chongqing, Lanzhou, and Xining. Tibet trains take from 22 hours to around 55 hours to get to Lhasa, and the station lies a little to the south of Lhasa City, in the river valley itself. The view of the valley from the train as it pulls into the station is one of the most compelling sights in the world, and if nothing else leaves an impression on you in Tibet, the view that you get of this stunning and lush valley as you arrive is something that will stay in your mind forever.

There are also flights to Lhasa from Nepal, which take around 90 minutes to reach the Tibetan capital, and pass over Mount Everest along the way. Nepal is the only country with international flights to Tibet, and if flying is not your idea of travel, then you can always cross the border and travel overland.

Nepal is also the only country with an international border to China that lies in Tibet, and overland travel from Kathmandu to Lhasa is one of the most popular routes to take for the tours of Tibet from Nepal. The overland route covers a distance of more than 900 kilometers, traveling along the Friendship Highway to Lhasa via Mount Everest, Shigatse, and Gyantse, and following the river valley of the Yarlung Zangbo to the mouth of the Lhasa Valley. From there, the road follows the Lhasa Valley all the way to the Tibetan capital, and on this drive you get to see some of the stunning scenery that makes this one of the most beautiful valleys in the world. - See all Tibet Nepal Tour Packages

0 Comment ON "Lhasa Valley: the most enchanting valley on the roof of the world"