Lhasa Town: ultimate guide to your day tour in Lhasa

Literally known as “the place of Gods” in Tibetan language, Lhasa, the capital of Tibet, has become more and more modernized with the development of society and economy. To some extent, old Lhasa Town not only represents the ancient history of Tibet but also the original lifestyle of local people. It is the charm that attracts millions of domestic and international tourists coming to explore the holy Lhasa, Tibet.

Actually, Old Lhasa Town is an old residential area located near Beijing East Road, with Jokhang Temple as the core and the Barkhor Street as the ring road, covering the total area of more than 20,000 square meters. There is no obvious boundary with the new Lhasa city. The well-preserved Tibetan-style buildings and authentic goods on the commercial streets make it distinct from the new urban area. Thus people name it as the Lhasa Old Town.

As a historical and cultural city, Lhasa has maintained the layout of the old town very well. The heights of surrounding buildings are strictly limited to ensure the glory of the Potala Palace, Jokhang Temple and Norbulingka are not sheltered.

There are many small temples and monasteries scattering in the backstreets of Old Lhasa Town, which need you to carefully find them out. Strolling in the old town, you will have the chance to taste the mouth-watering snacks and encounter lovely Tibetan Ajia (Tibetan girls). Just like Hutongs in Beijing, you should not miss the Lhasa’s backstreets on our old town walking tour.

How to Plan Your Day tour in Lhasa Town

We suggest you sparing one day to sweep through the most representative scenic spots or buildings in the old city of Lhasa. The 6.5-kilometer-long loop consists of two parts, the inner kora (visit around Barhkor Street) and outer kora (partially visit around Linkor Street). To make your Old Lhasa Town tour more smoothly, we, Tibet Vista Team, have designed out an easy-to-use map for you to explore the Jokhang Temple, Barkhor Street and surrounding residences. 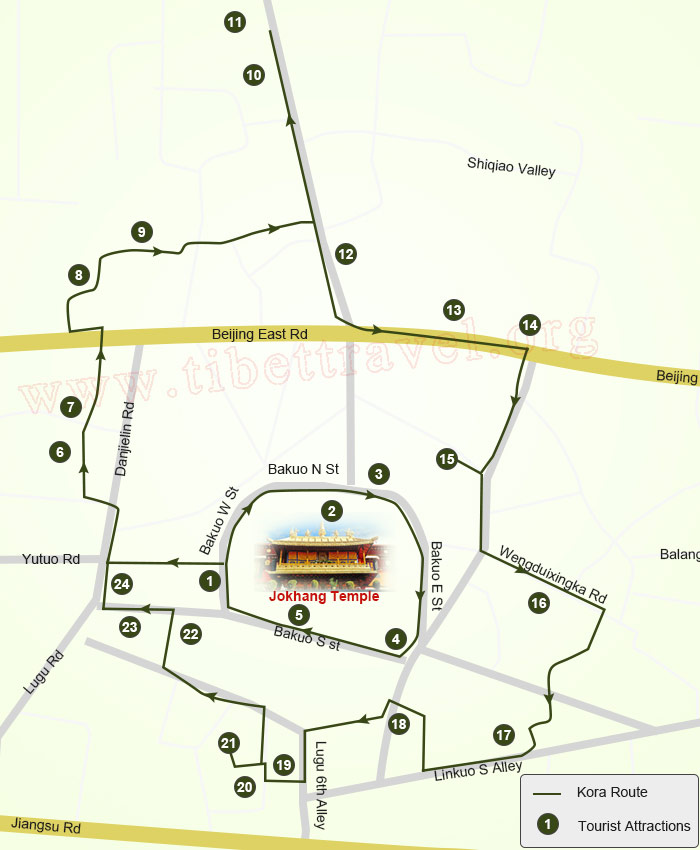 The inner kora is a circle along Barkhor Street. That to say, the first part of today’s itinerary is Barkhor Kora around Jokhang Temple. Barkhor Street was developing with the construction of the Jokhang Temple and the swarms of pilgrims. Like Lhasa City, it has a history of 1,300 years.

1. Jokhang Temple
As the old saying goes, "there is Jokhang Temple first, followed by Lhasa City." It is said that the Jokhang Monastery was built by Songtsan Gambo for his Nepal’s Princess Bhrukuti around 1300 years ago. The temple is dedicated to the 12-year-old statue of Sakyamuni brought by Tang Princess Wencheng, and has the supreme status in Tibetan Buddhism. It is the most splendid temple in the entire Tibetan area.
Tickets: 85 yuan
Recommended rating: ★★★★★
Opening hours: 8:30-18:30 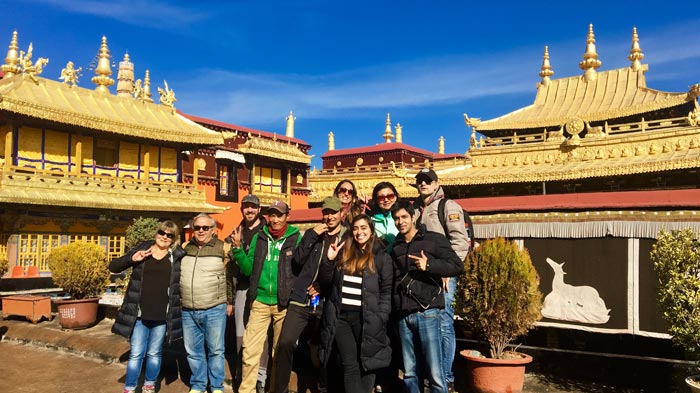 2. Barkhor Big Prayer Wheel
It lies in the white house at the northeast corner of Barkhor Street. Please be careful or you will miss it near to Langzisha.
Tickets: Free
Recommended rating: ★★★
Opening hours: 24 hours

3. Qing Government in Tibet Grand Minister Administrative City Former Site
It was used by the high commissioners to supervise the handing of Tibetan affairs on behalf of the central government. Now it turns to be as a museum to display historical materials on the governance of Tibet from the Tang Dynasty to the Qing Dynasty, and has restored the scenes of the office life of the Minister in Tibet. Through the well-preserved exhibition, you will get a better understanding of the relationship between the Central Government and Tibet since the Qing Dynasty.
Tickets: Free
Recommended rating: ★ ★ ★ ★ (especially for history buffs)
Opening hours: May-September 9:30-18:30; October-next April 10:00-18:00

4. Dongsu Lhamo Wall
At the corner of Barkhor North Street, you will appreciate the super gorgeous emboss of the Godness Dongsu Lhamo, the daughter of Palden Lhamo (Bandanlamu, the Auspicious Goddess). It is said that this goddess is always loafing around Lhasa streets and doing nothing at all. Palden Lhamo is so angry that drive her out of the house. Since then, Dongsu Lhamo can only rely on begging along the street for Tsampa and yak butter. Out of sympathy for the homeless goddess, the locals have formed the habit of greasing oil and scattering Tsampa in front of her emboss on this wall until now.
Tickets: Free
Recommended rating: ★★★
Opening hours: 24hours

5. Gedun Chophel Memorial Hall
The memorial mainly displays the life of the living Buddha Gedun, including his paintings, study diaries, and living utensils. Gendun Qunpei is very famous in Tibet. His contribution mainly lies in the breakthrough of Buddhist obscurantism and aristocratic bureaucracy, as well as patriotism.
Tickets: Free; explanation fee 70 yuan
Recommended rating: ★★★★★ (Subverting your understanding of Tibetan living Buddha and learning about the history of Tibet for half a century)
Opening hours: May-September 9:30-18:30; October-next April 10:00-18:00

The essence of the old city of Lhasa actually lies in the residential area of Lhasa locals. Here, you will feel like getting closer to local life rather than rushing to the sights as ordinary tourists do. 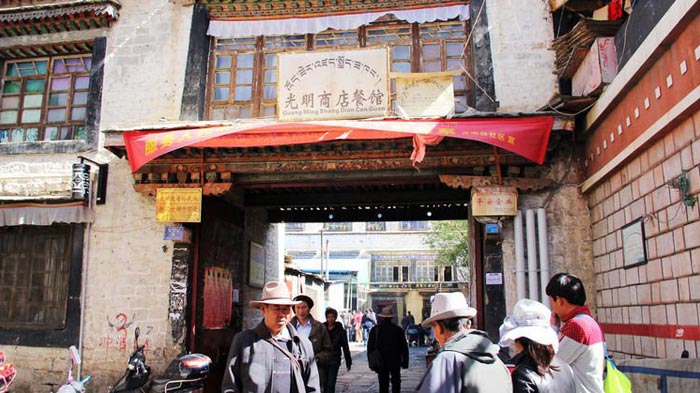 You can enjoy a sip of Tibetan sweet tea in a very authentic way: after entering the store, you can take a cup and find a sit as you like. The waiter will shuttle through the house and fill the cups with sweet tea. If you need tea, just put money for one single cup of tea on the table, the waiter will refill your cup.

8. Xidelin Temple
Xidelin Temple, also known as Xide Zhacang, is one of the “Four Great Lin Temples”. Initially built in the 9th century, Xidelin Temple was later expanded into one of the highest buildings in Lhasa. It’s said that there is a tunnel connecting to the Potala Palace and the Jokhang Temple. However, there is no temple at all but only ruins. It was burned down due to a religious coup, so what we can see today is only the piles of debris standing in the residential buildings.
Tickets: Free
Recommended rating: ★★★
Opening hours: 24hours

9. Cemenlin Temple
Chemenlin Temple, also famous as Cemenlinsi, is a temple hidden in the folk houses. Many residents living in surroundings often come to the temple and participate in Buddhist activities. Stepping into the temple, you’ll see rows of folding chairs with the colorful clothes on. Behind them are the golden prayer wheels spinning by the devout pilgrims. It’s very different from the scenes seen in the other temples in Lhasa.
Tickets: Free
Recommended rating: ★★★★ (the most popular temple in the residential areas)
Opening hours: 8:00-18:00

10. Cibalakang Temple
Cibalakang Temple, also named as Changshou Temp, is located on the south side of Ramoche Temple. Both residents and tourists like burning incense here for the health and longevity.
Tickets: Free
Recommended rating: ★★★
Opening hours: 6:30-17:00

11. Ramoche Temple
Compared with the prosperity of the Jokhang Temple, Ramoche Temple is extraordinarily clean and quite. Originally built by Princess Wencheng from Tang Dynasty for serving the 12-year-old statue of Sakyamuni, Ramoche Monastery later had become the site of the Shangmiyuan, the highest seat of the Gelugpa, in the middle and late 15th century. Now it houses the 8-year-old statue of Sakyamuni brought by Nepal’s Princess Bhrukuti.
Tickets: 20 yuan
Recommended rating: ★★★★★
Opening hours: 7:30-21:00

13. Xiamiyuan
Legend has it that during the heyday of Xiamiyuan, it could accommodate 500 monks at the same time. It’s home to the 5-meter-high Tsongkhapa statue, the tallest one in all the Lhasa monasteries.
Tickets: Free
Recommended rating: ★★★
Opening hours: 8:00-18:00

14. Muru Temple
Muru Temple sits next to Xiamiyuan. The former main hall has been used as the print house and not opened to tourists any longer. The former side hall turns to be the main hall today, where you can appreciate the huge Thangka Painting and spectacular butter flowers on the wall.
Tickets: Free
Recommended rating: ★★
Opening hours: 8:00-17:00

15. Tabulin Temple
Located at No. 3, Jiri 1st Alley, Tabulin Temple is quaint and small. It’s very difficult to find it out and please be careful or you’ll miss it.

16. Gamaxia Temple
Back on to the bustling street, Gamaxia Temple (Gamaxiasi) is the brilliant yellow building lying in the old town of Lhasa. This house was used to be the residence of the Kagyu King in Lhasa. Recent days, only two old people cleaned the house and it’s rarely to see monks or believers visiting it.
Recommended rating: ★★
Opening hours: 7:30-18:00

17. Canggu Temple
Anitsangkung Nunnery (Canggusi or Canggu Temple) is the only nun temple in the old town of Lhasa. Another highlight here is the unique Canggu sweet teahouse. There is a chanting at 8:00 in the morning. But it closes earlier than other temples. Generally speaking, you cannot come in after 5 o’clock in the afternoon.
Tickets: 40 yuan
Recommended rating: ★★★★
Opening hours: 8:00-18:00 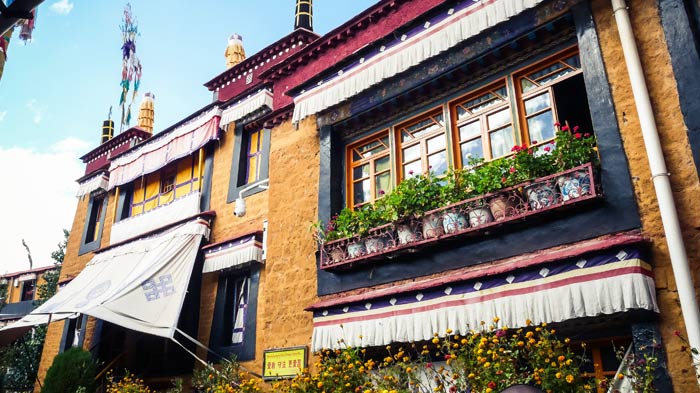 Anitsangkung Nunnery, the only nun temple in the old town of Lhasa

18. Raosaikangcan Temple
Raisaikangcan Temple was established during the Songtsan Gambo period, where Princess Wencheng once lived. The main hall is dedicated to Tsongkhapa and Padmasambhava. The statue on the right is Zashi Lhamo, the God of Wealth. The golden footprint on the left side belongs to Songtsan Gambo.
Tickets: Free
Recommended rating: ★★★
Opening hours: 8:30-17:30

19. The Temple of South Three Proptectors (The Southern Rigsum Lha-khang)
First built in the Jokhang Temple period, the Temple of South Three Proptectors now is a branch temple of Ganden Monastery in the old city of Lhasa. It consists of the Buddha’s hall and kora trails. And you’ll see the Buddhist themed murals engraved on the route.
Tickets: Free
Recommended rating: ★★★

21. Trode Khangsar
Trode Khangsar Temple is a Tibetan Buddhist Gelugpa monastery dedicated to the protector Dorje Shugden with the history of over 300 years. Here you can see the precious scriptures, dedicate murals and giant Thangka paintings.
Tickets: Free
Recommended rating: ★★

23. The Temple of West Three Proptectors (The Western Rigsum Lha-khang)
The temple is very small, hiding among the dwellings. It is dedicated to the statues of Tsongkhapa and the Three Proctors.

24. Jokhang Temple Square
Finishing a circle of the old town of Lhasa, you will come to the Jokhang Monastery Square and tour service ends.

Still have question on how to plan a Lhasa Tour? Please feel free to send us your inquire and our seasoned Tibet travel guru will help you work out a flexible itinerary base on your interest and preference. Here we also offer you the Lhasa Location Maps and Lhasa City Maps, which clearly present you with the location of Lhasa in Tibet, China, Asia and World, and greatly help you find out the the main streets and roads, the tourist attractions, restaurants and hotels in Lhasa.

0 Comment ON "Lhasa Town: ultimate guide to your day tour in Lhasa"