One of the Great Three Holy Lakes of Tibet, Lake Yamdrok is one of the most stunning attractions close to Lhasa. Just 75 kilometers from the Tibetan capital, as the crow flies, this beautiful lake is an awesome sight, and one that can only be seen after a couple of hours driving. Lying on the southern edge of the Nyenchen Tanglha Mountains, to the southwest of the Tibetan capital, Lake Yamdrok is one of the most sacred lakes in Tibet, and is believed to have been created by a goddess to save the Tibetan landscape and people.

Located in Shannan Prefecture of Tibet, which lies in the south of the plateau region, Lake Yamdrok is one of the best places to use as a central location for trips to Gyantse, Tsedang, Yumbulakang Palace, Samding Monastery, Mindroling Monastery, and the pristine Karola Glacier. The lake has a lot of legends that surround it, and it is widely believed by Tibetan Buddhists that, if Yamdrok Lake ever dries up, then Tibet will no longer be habitable.

Lhasa to Yamdrok Lake by Road Distance: 114 km and How to Travel

An overland trip to Lake Yamdrok is usually part of a longer tour, though you can actually include Lake Yamdrok as a day trip from the capital on one of our 5-Day Lhasa and Yamdrok Lake tours. By road, Lake Yamdrok is around 114 kilometers from the center of Lhasa, and takes around 2 hours 30 minutes to drive.

The route from Lhasa to Lake Yamdrok normally follows the G318 and the S307, which runs past the northern shores of the lake on the way to Gyantse. The G318, also known as the Sino-Nepal Friendship Highway, takes you out of Lhasa, as far as Quxu, on the northern banks of the Yarlung Zangbo River. Just after Quxu, you will turn off onto the bridge that crosses this vast river, and join the S307 National Road, which heads roughly south by southwest towards Gyantse. 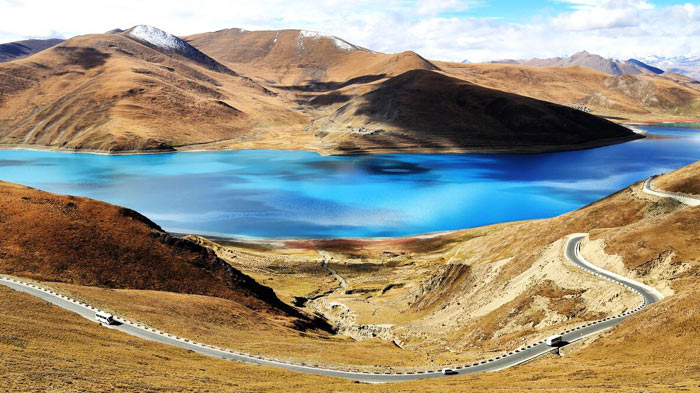 A great birdview of the stunning Lake Yamdrok from the Kamba La Pass.

The road heads over the famous Kamba La Pass, at around 4,790 meters above sea level, from which you get one of the best vistas of the lake in Tibet. In the distance, behind the lake laid out in front of you, you get a clear view of Mount Nyenchen Khangsar, the closest 7,000+ meter mountain to Lhasa and one of the sacred mountains of Tibet.

From the crest of the Kamba La Pass, the road drops down the other side, to the lake’s shores, where you can get out of the car and enjoy the stunning views of the lake’s blue-turquoise waters close up.

Lhasa to Yamdrok Lake by Cycling Distance: 114 km and How to Travel

Cycling to Lake Yamdrok from Lhasa is one of the greatest adventures in Tibet, and while it is hard work getting there, especially crossing the high Kamba La Pass, it is worth the effort to be able to see the lake stretching out before you. The advantage of cycling to the lake is that you get to be out in the clear crisp air the whole time, and can stop to take in the spectacular views of the mountains and valleys whenever you like. 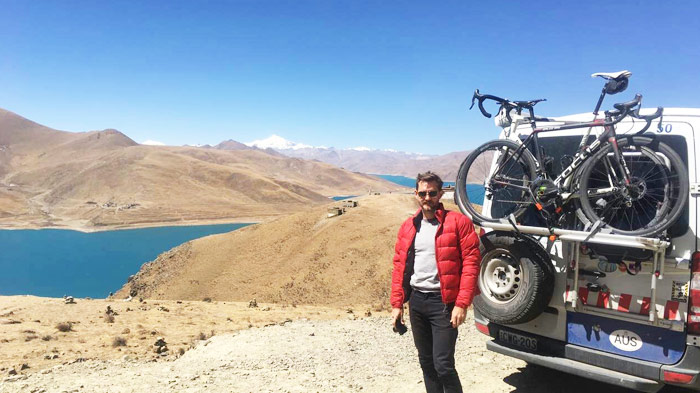 It usually takes you two days to bike from Lhasa to Yamdrok Lake.

The climb up to the high Kamba La Pass, just before you get to the lake, is quite steep, and it is a good idea to rest as frequently as you need to while climbing this high pass. However, once you reach the crest, you will be amazed at the view of the lake laid out before you. The ride down the other side is easier, although you should be careful not to ride too fast, as there are plenty of bends and switchbacks on the downhill route from the pass.

As it does take two days to make the trip by bike, you will need to camp along the route for one night. The first day of cycling is normally around 85 kilometers, and is relatively easy, as it follows the flatter terrain of the river valley. The campsite is actually at the foot of the Kamba La Pass, so you will be able to attack the steep climb refreshed in the morning. Once over the pass on the second day, you will get to spend plenty of time at the lake before heading back, exploring the stunning shoreline, and the local monasteries.

Lake Yamdrok is one of the few places in Tibet that can be easily visited all year round, and is a great place to travel to, both in the summer and winter. So really, the best time is when you feel you want to go, although February and March are closed for international tourists to Tibet.

Summer is a popular time to visit, from June to September, when the landscape is lush and green from the monsoon rains and the weather is at its warmest. While the summer months are the monsoon season, it usually only rains in the late afternoons and evenings, or even overnight, so it rarely interferes with your tour, and the days are warm and sunny. The main advantage of summer is the lushness of the surrounding grasslands around the lake, which are popular grazing grounds for the local farmers and herders for both yaks and sheep. 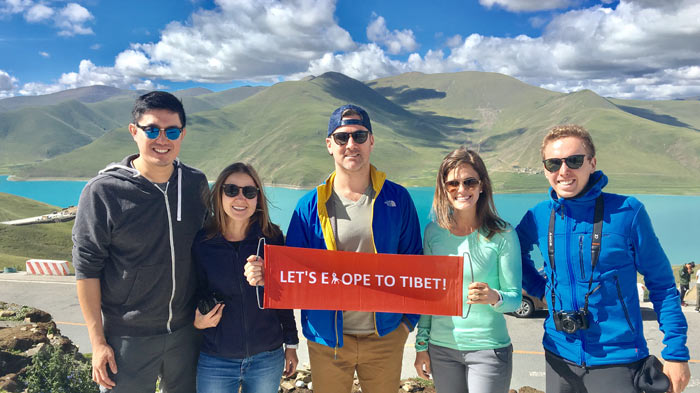 Enjoying the spetacular scenery around Yamdrok Lake in early Autumn.

Spring or autumn is another great time to visit, and each has its own highlights. The spring months, from April to June, are the fresh time of year, with temperatures warming up and the new buds of growth coming out after the winter months and the cold and snow of the plateau. The autumn months, from October to November, are also pleasantly warm, as the summer heat is still wearing off, and the landscape is still a lush green from the monsoon rains, while the trees start to drop their leaves in the river valleys, leaving a carpet of colors on the ground.

Winter has its own attractions for the traveler in Tibet, and the Yamdrok Lake has plenty to offer even the winter tourists, as if the lake itself does not want to disappoint anyone that visits. While it may be a little colder in the winter months, from December to the end of January, the weather is pleasant and can be warm enough in the sunny daytimes to be comfortable, as the lake is not at an extreme altitude. The latter part of winter often sees a little snow and ice on the lake, and the waters can be frozen across the entire lake by January, making the whole scene look like something out of a fairytale book. It can get pretty cold at night, often below freezing, so it is not a good idea to cycle to the lake in the winter months.

What Travel Documents Do I Need for Lhasa Yamdrok Lake Tour?

If you are taking a tour to Lhasa and Lake Yamdrok, then there are certain documents that you will need to have before traveling. Travel in Tibet can no longer be done independently, and all international tourists must be on an organized and pre-booked tour provided by a registered Tibetan tour operator. Once you have booked your Tibet tour with us, that is the time when we can make the applications for your permits.

The first thing you will need is the Chinese Entry Visa, which is required to enter China to get to Tibet. However, when you make the application from the local Chinese Embassy, it is best to not mention that you will be traveling to Tibet, as this causes problems with issuing the visa.

Once you have your visa, we will make the applications for the Tibet Travel Permit, the first permit you will need, using scanned copies of your passport and visa. The processing time for the permit is normally around 15-20 days, but it can be shorter in the low season months for Tibetan tourism. Once approved and issued, the Tibet Travel Permit will be sent to your hotel in China, ready for you to take the train or flight to Lhasa. The permit is actually required for boarding of both the trains and flights to the Tibetan capital, and you will not be able to board without it. The Tibet Travel Permit is required for you to enter Tibet and travel around in the area of Lhasa.

Once you reach Lhasa, your tour guide will process the application and issuance of the second permit you will need, the Alien’s Travel Permit. The permit is required for all travel outside Lhasa to the “opened” areas of Tibet, such as Lake Yamdrok, which lies just within Shannan Prefecture of Tibet. The permit will be applied for by your guide while you are touring around the city on your first few days, and takes around an hour to process. The permit will require your original passport and Tibet Travel Permit to process the application, which your guide will obtain from you for a short time.

Once the permit is processed, you are good to leave the city, with your guide and driver of course, and travel to the lake to view this beautiful holy lake of Tibetan Buddhism.