Lhasa Railway Station: the most useful travel guide for your Lhasa arrival and departure by train

Where is Lhasa Railway Station?

Lhasa Railway Station, also known as Lhasa Station, is the terminal station of Qinghai-Tibet Railway. Located in the Liuwu New Area, Doilungdeqen District, Lhasa Railway Station is about ten kilometers far away from the prestigious Potala Palace and downtown Lhasa. The Liuwu Bridgeover the Lhasa River connects the railway station to the city of Lhasa. 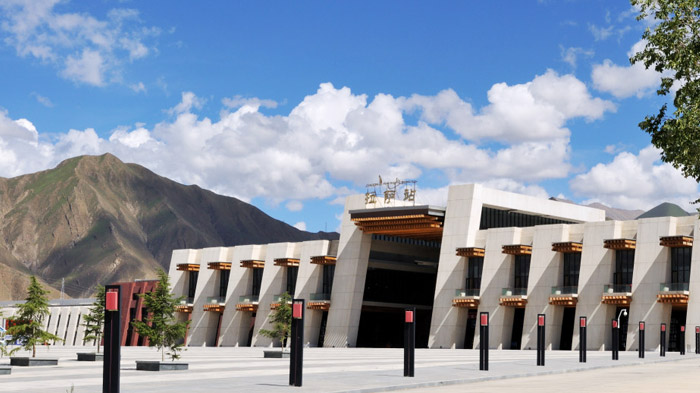 Built along the hill, Lhasa Railway Station(3,641meters) is the largest station of the Qingzang Railway, one of the landmark projects of the “Sky Road to Tibet” as well as one of the world’s highest railway station. Since officially put into operation on July 1, 2006, Lhasa Railway Station has served as the major station for the Qinghai-Tibet Railway, the Lhasa-Shigatse Railway and the Lhasa-Nyingchi Railway (a section of the Sichuan-Tibet Railway) and been a first-class passenger and cargo station.

Up to now, it has already received tens of thousands of domestic and international tourists who taking Tibet train from Beijing, Shanghai, Guangzhou, Chengdu, Xining, Xian, Chongqing, Lanzhou to Lhasa.

Towering at the altitude of 3641 meters above the sea level, Lhasa Railway Station is designed as a two-story italic building with a height of 22.9 meters. The main station has a length of 340 meters and a width of 60 meters, covering a building area of 23,600 square meters.

Lhasa Station has ten tracks in total, eight arrival-departure tracks for passenger trains and two for cargo trains. There are 7 waiting platforms at the station, all of which have pillarless canopies. The designed passenger throughput can reach 2,700 people per day. The main body of LhasaStation is divided into three layers, one underground and two above ground.

The central hall on the first floor of Lhasa Railway Station is mainly decorated in red tones with the white and red anti-slip stones laid on the floor. When you walk in, the rich Tibetan architectural style makes you feel like you have entered into a traditional Tibetan palace. But the LED screen and escalator would drag you back to reality.

On the west side of the first floor lobby is the ticket hall with over 10 service windows, where you can purchase the tickets for trains, flights and long-distance buses. A large LED screen on the west of the ticket hall is mainly used to display the detailed schedule, ticket price of the train in and out of Lhasa Railway Station.

On the southeast side of the first floor lobby are a large soft-seat waiting room and three VIP waiting rooms. The VIP room has high-grade carpets and large tapestries. The tapestry patterns are mainly famous tourist attractions like Potala Palace, Mount Everest with strong ethnic flavor. 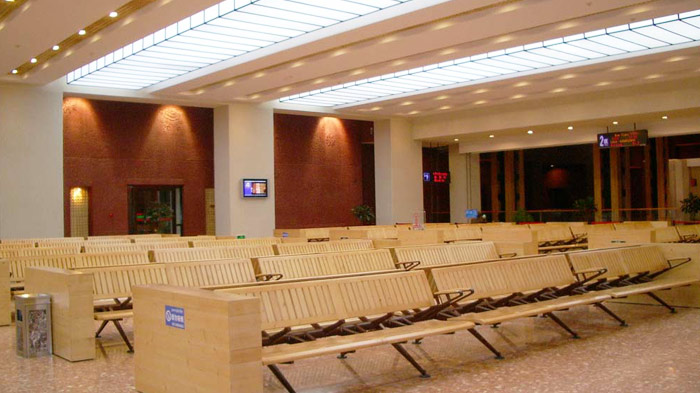 Waiting room in the second floor of Lhasa Railway Station

The ticket entrance is on the southwest. After checking in, passengers need to pass through a 30-meter-long flyover, from where you can catch a panoramic view of the first floor. The escalator installed on the sides of the flyover will send you to the platform directly. To make it more convenient for passengers, the slides of the escalators are designed to transport tourists’ luggage and the station also set up the escalator for the disabled.

The Underground of Lhasa Railway Station

Outbound passengers can enter the underground passage from the platform and then take the escalator directly to the first floor lobby. Walking out of the exit, passengers can see a three-dimensional rendering on the west side of the wall, displaying the most famous Tibet tourist attractions.

How to Get to Downtown Lhasa from Lhasa Railway Station

The bus stop is on the east side of the train station square. You can find it right after exiting the station. The bus departure time is the same as the train arrival time, so there is no need to worry about the train arriving at the station without a bus. Bus No.1, No.13, No.14 can take you to the downtown Lhasa and the ticket price is one yuan per person.

Usually, it costs you about 25 yuan to get to the urban area from the station by metered taxi. If not, they will charge you 30-50 yuan for a single ride. In the peak season, you can only carpool with others, paying 15-20 yuan per person.

Use Our Transfer Service

To make things easier for you, we, Tibet Vista team, would offer free shuttle service from/to the train station on the date of tourists' arrival and departure. Once you arrive at Lhasa Railway Station, you need to take your baggage off the train and walk out from the platform. Our professional Tibetan tour guide and driver will wait you on time at the marked area in front of the station with your name on the pick-up card. 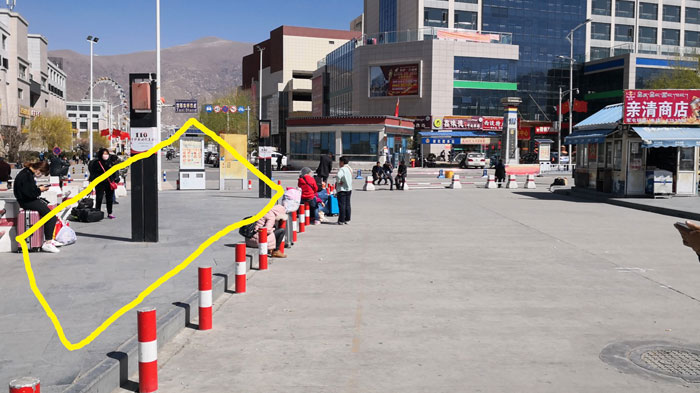 Upon your arrival, please wait for your tour guide in the marked area

After greeted with a white holy Hada, you will be escorted your hotel in Lhasa City. On the way, you will catch a glimpse of the Yarlung Tsangpo River/ Bhamaputra river (the Longest and largest river in Tibet), Lhasa river and Potala Palace in far distance. And our seasoned tour guide will give you a brief introduction of Lhasa Forbidden City and general itinerary for your following days in Tibet. Actually, everything will go very smoothly, so no need to worry at all. Just book Tibet train tour with us and nail down the details.

Other Dos and Don’ts When traveling in Lhasa Railway Station

1. Due to the long-distance train ride on the Qinghai-Tibet Railway, we strongly suggest choosing soft-sleeper and hard-sleeper berth rather than the hard seat for a good sleep.
2. If you felt something uncomfortable on the train to Tibet, please turn to the attendant for help immediately. The train stuff and medical team will give you proper help in time.
3. Upon your arrival at the Lhasa Railway Station, please do not so excited to yell out or shout loud. To be polite and respect other passengers and tourists.
4. After getting off the train, you’d better get out immediately to find our tour guide instead of waiting at the platform inside. We’ll always pick you up on time. Don’t hang out on the square.
5. Don’t rush to visit any tourist attraction. The most import thing is to get to your hotel and have a nice rest first and let the body adapt to the high altitude to avoid acute mountain sickness.
6. Avoid all the strenuous exercise, like running, jumping, etc.
7. Try to drink plenty of water and eat fresh fruit and vegetables as much as possible. Avoid too much alcohol and smoking.
8. Keep warm and avoid getting cold for it would deteriorate into HAPE (High Altitude Pulmonary Edema) and HACE (High Altitude Cerebral Edema).

0 Comment ON "Lhasa Railway Station: the most useful travel guide for your Lhasa arrival and departure by train "