How to Travel in Lhasa: top experiences to enjoy in Lhasa

Lhasa, as the capital of Tibet, is a lively area of Tibet that invariably draws most visitors. This city is situated in the highest plateau Qinghai Tibet Plateau in the world. For its unique geographic location, all things seem to be endowed with the magic power, the snow-covered mountains, charming alpine lakes, and latticed canyons. Lhasa, as the spiritual center of Tibet, is full of devout pilgrims. Moreover, Lhasa is the cultural center of Tibet. There are world heritages, such as the Potala Palace, Jokhang Temple and etc. All of these are worthy of a visit.

Barkhor Street is a magical path that combines religion, architecture, and business. It is impossible to visit Lhasa without ending up in the flow of pilgrims walking the Barkhor kora or religious circuit, circling the inner heart of the Tibetan quarter around the Jokhang temple -- in a clockwise direction. In Lhasa, everyone knows this ancient street. In Barkhor Street, travelers can enjoy the most historical Kora Route’s charm. The 1500m-long Kora starts from the main entrance of Jokhang Temple and ends in the same place. 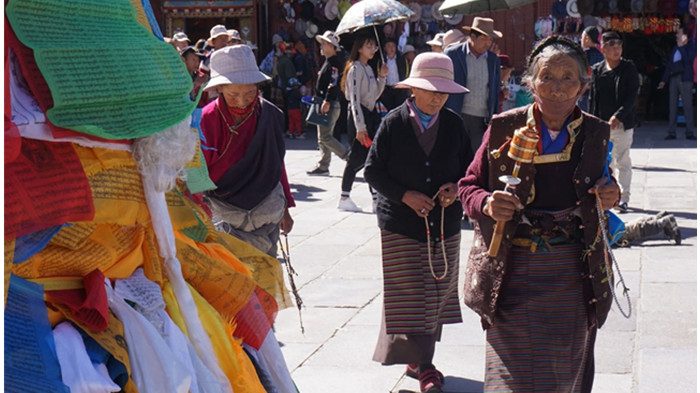 Barkhor Street is flourished by the Jokhang Temple for it is a thousand-year Kora path that many pilgrims come here. The kora is especially beautiful and interesting during the early morning and the late afternoon. Until this time, Barkhor Street is greeted with fervent Tibetan worshippers and worldwide tourists. You can see all kinds of people on this circuit from all over Tibet, with their traditional and remarkably colorful dresses. Sometimes, you will see pilgrims making prostration in this street.

Climb Potala Palace to Enjoy the Panorama of Lhasa

There is an old saying goes, if you don’t climb Potala Palace to enjoy the panorama of Lhasa, you have never gone to Tibet. Potala Palace, as a symbol of Tibet, perches on the Red Hill of Lhasa. This amazing palace has the honor of being the highest ancient palace in the world. Its fortress-like architecture comprised of the Red and White Palaces embellished with brilliant gold rooftops has attracted Buddhist pilgrims and travelers all over the world for many years.

If you want to visit Potala Palace, you’d better start your joinery in the morning. You can see the flocks of Tibetan pilgrims who begin to climb the zigzagging stairs ramps that lead to the Potala Palace. You can be a part of them. When reaching a certain height, you may want to have a rest on the stair. Usually, local pilgrims will catch up with you, and then encourage you with their warm smiles.

After reaching the top, the Potala Palace looks fantastic from the outside, glistening in the sun. The Tibetans will circle the palace with their prayer wheels. Around the bottom of the palace, there are thousands of prayer wheels. At the top of Potala Palace, you can overview the beautiful scenery of Lhasa. Lhasa is surrounded by rolling hills, and the lakes lie quietly in the distance, with white clouds floating in the sky. It is indeed marvelous. For travelers, this would be an excellent experience in your lifetime.

Located at the center of the old Lhasa, Jokhang Temple is the spiritual center of Tibet. It has a history of more than 1,300 years. The temple has the architectural features originating from its Tibetan, Tang Dynasty, Nepalese, and Indian architects and craftsmen. Visitors will be able to see various exotic and sacred sculptures. Jokhang Temple also houses many invaluable cultural relics. Jokhang Temple has remained a key center of Buddhist pilgrimage for centuries.

For most Tibetans, it is the holiest and important temple in Tibet. The main hall of the temple houses the Jowo Shakyamuni Buddha statue, it is said that maybe this is the only venerated object in Tibetan Buddhism. Moreover, there are renowned statues of Chenresig, Padmasambhava and King Songtsan Gambo and his two famous foreign brides, Princess Wen Cheng and Princess Bhrikuti of Nepal. As the Tibetan people once said that "There is Jokhang Temple first and then Lhasa city established". Therefore, to explore the holy Jokhang Temple is a must-see in the course of your Lhasa tour.

Taste Local Food in Teahouse and Restaurants in Barkhor Street

Tibetan cuisine, food and drink are just like Tibetan people and their culture, with its distinctive characters. It is worth trying. To taste local food is a better way to appreciate real local Tibetan life and culture for Tibet travel. 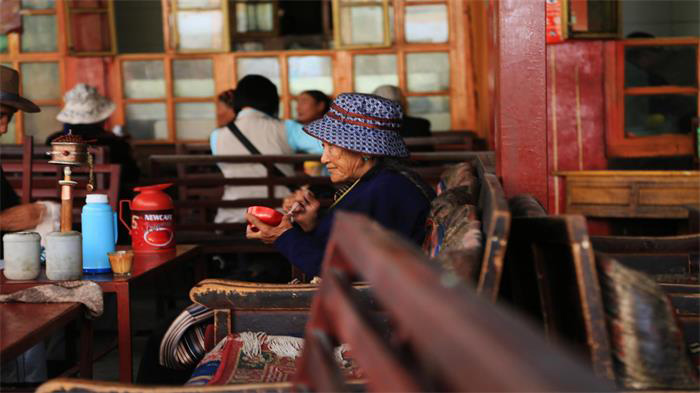 The teahouse is a place that can be found easily in Lhasa. Especially, Tibetan Sweet Tea (Tibetan Milk Tea) is prevalent in Tibet. It consists of boil milk with sugar and brick tea. There is a saying that Tibetan Sweet Tea is the blood of Lhasa, from which you can see the important significance of sweet tea in Tibetan life. Many sweet teahouses are located in Lhasa’s street. Local Tibetan comes here every day. Travelers can find a teahouse to drink the sweet tea and chat with friends all day to relax. Moreover, drinking in the teahouse to feel the best experience of a daily life of local people is a wise choice.

Except for the teahouse in Lhasa, the Barkhor Street is another place where tourists can enjoy all kinds of cuisine at different restaurants in Lhasa, such as the Dunya Restaurant, Makye Ame and so on. These restaurants can offer different types of food, the traditional Tibetan food, Sichuan dishes, Hunan dishes, and Northwest flavor and etc. Besides restaurants, some hotels in Lhasa also offer western food, such as Hard Yak Cafe of Lhasa Hotel. Undoubtedly, here is the best place to enjoy the authentic and delicious the Tibetan meals for many international travelers.

After eating dinner, let’s watch the monk debate in Sera Monastery. Sera Monastery is one of Lhasa’s three most important monasteries in Lhasa, the Holy City of Tibetan Buddhism. The monastery played the role of the religious center, education center, schools and universities. Even now, young people’s education can still be had at a monastery. Therefore, the monk’s debates are a huge attraction for tourists to Tibet.

Different from other debate, this debate is full of extravagant gestures and hand clapping. To watch the monk debate is the most interesting part for travelers to visit Sera Monastery. This kind of debate, as a part of life, is an important part of learning. Monks participate in a series of debates. These debates are held in a courtyard of crushed stone. Senior monks raise junior monks on various doctrine. The junior monks are seated, while the monks questioning their knowledge of Buddhist scripture fire questions at them, accompanied by hand slapping. The hand slapping is a signal for the seated monk to respond. Although it seems pretty fun to the visitor, actually, it is a serious and important part of the training of these monks.

Enjoy the Kora around Ganden Monastery

During your Lhasa tour, the Ganden kora should not be missed. Ganden Monastery is the very first monastery of the Gelugpa order. Gelugpa sect is the biggest of all Buddhist sects in Tibet. In Ganden Monastery, like other monasteries in Tibet, have many different statues. However, the route of kora is different from Barkhor kora.

It consists of a low kora and a high kora, meaning that partly you walk upwards and partly downwards. Getting to the peak, you’ll see pilgrims burning juniper incense and offering tsampa. From here you walk downwards on the west side of the ridge towards the monastery. That’s the high kora. The low kora starts from another trail near the car park which goes west behind the ridge and the monastery. It’s a walk of nearly 45 minutes and fun all the way. You’ll encounter devout pilgrims peering at rocks through clenched fists, obviously, they pray to see some divine visions. Towards the end of the kora, on the eastern side of the ridge, is Tsongkhapa’s hermitage, a small building with relief images of Atisha, Sakyamuni, Tsepame and Palden Lhamo.

As we all know that Tibet is a land that is filled with lakes. However, two of the most popular for travelers are Yamdrok Lake and Namtso Lake. Both of these lakes are holy lakes in Tibet. These stunning lakes each have its own unique features and sights, so it is necessary for travelers to explore.

Yamdrok Lake lying to the south of Lhasa is one of the most stunning sights you will see in Tibet. The lake covers a huge area of land, with its arms stretching out in all directions. The scenery of Yamdrok Lake can be the best in southern Tibet, the snow-covered mountains, island, grassland, farm and other landscapes. You can also find many local animals around the lakeshore, such as yaks and Tibetan mastiffs, which are owned by local people and dressed up for tourists to photograph. You can even shoot a photo while riding on the back of one of the dressed yaks. All of these could be an unforgettable memory during your Lhasa tour. 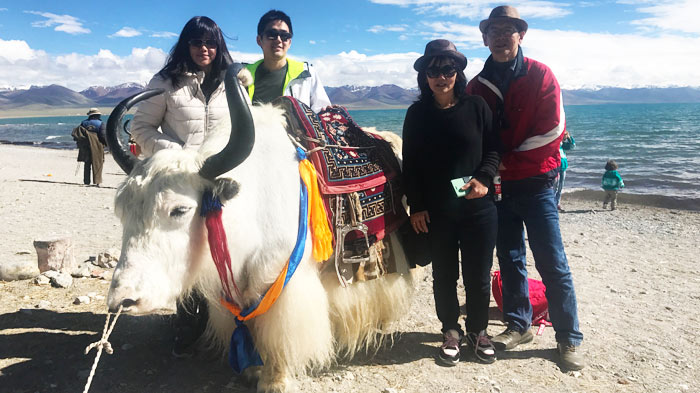 Another of the holy lakes of Tibet, Namtso Lake is a saltwater lake and the largest on the Tibetan plateau with an altitude of 4718m. Lake Namtso is known as the “Heavenly Lake”. In Lake Namtso you can often see the pilgrims walking around the lake, often prostrating themselves in worship as they travel. Namtso Lake is a great place to hike or even cycle as well. When tourists can cycle from Lhasa to Namtso Lake, the route to the lake is exceptionally beautiful. The route does require a lot of stamina but is worth it for the amazing views and the ability to stop whenever you feel like it. For hikers, you can trek around the lake, staying in a variety of campsites and monasteries that offer guesthouses for trekkers and pilgrims. Trekking will take you through some high passes and some of the most beautiful grasslands in Tibet.

If you want to explore the beautiful lake, you’d better visit the lake is from June to late October. Because summer and autumn are the best times to camp out at the lakeside, and the great time to enjoy the stunning vista of the stars in the night sky.

In brief, Lhasa, as the holy city of Tibet, is a place worth visiting for natives and international travelers.

0 Comment ON "How to Travel in Lhasa: top experiences to enjoy in Lhasa "