Ganden Monastery in Dagzê County of Lhasa is one of the Great Three Monasteries of the Gelug School of Tibetan Buddhism, and one of the most important monasteries in Tibet. Lying around 57 kilometers to the east of Lhasa, just off the southern side of the Sichuan Tibet Highway, this unique monastery lies at the top of Wangbori Mountain, in a shallow natural depression just below the actual peak.

One of the best day trips out from Lhasa, the monastery, whose full name is Ganden Namgyal Ling, is also one of the best sites for short day-treks in Tibet, with a kora route that is in two sections, the high kora and low kora, and whose name means “victorious temple” in Tibetan. Surrounded by some of Tibet’s most stunning and dramatic views of the valley and mountains of eastern Tibet, Ganden Monastery is a must-see day trip for anyone who is touring in the Lhasa area.

History of Ganden Monastery and Its Founder Tsongkhapa 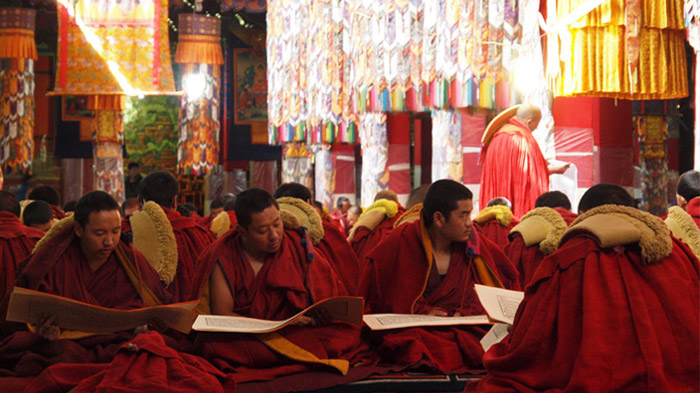 During the time of the second Ganden Tripa, the monastery was divided into four distinct colleges of Tibetan Buddhism, which were later incorporated into just two, the Jangtsey College and the Shartsey College, which are still important Buddhist colleges today.

In the 1860s, the monastery was the host of one of the greatest gatherings of Buddhist and government officials, which had been organized by one of the lay aristocrats of the period, Shatra. This eventually led to the Tsondu, or assembly, which chose the regents of Tibet and played a major role in the politics of the region. As one of three Great Monasteries of the Gelug School, which totaled more than 20,000 monks at the time, the Tsondu could even veto government decisions that the Ganden tripa disagreed with. At its height, Ganden monastery housed more than 5,000 monks, although by the late 1890s, this had dropped to around 3,300, and by 1959, it was estimated that only around 2,000 monks remained in the monastery.

The monastery was completely destroyed during the 1959. Since the early 1980s, the monastery has been rebuilt to the same specifications as the original design, and there are now around 400 monks in residence. After the rebuilding work was mostly completed, a reliquary chorten containing the remains of Tsongkhapa was constructed inside the sanctum sanctorum, or central Lhakhang, known as the Tongwa Donden.

The original monastery at Ganden contained around 2 dozen major chapels, each of which contained large statues of Buddha. The largest of the chapels could comfortably hold around 3,000 monks at prayer, while the other chapels could hold around another 4,000 collectively. The main assembly hall of the monastery is a large white building with gilded roofs and a huge outer square at the front. Inside, the main chapel also contains many images of Tsongkhapa, painted throughout his life and depicting his many Buddhist teachings across Tibet. 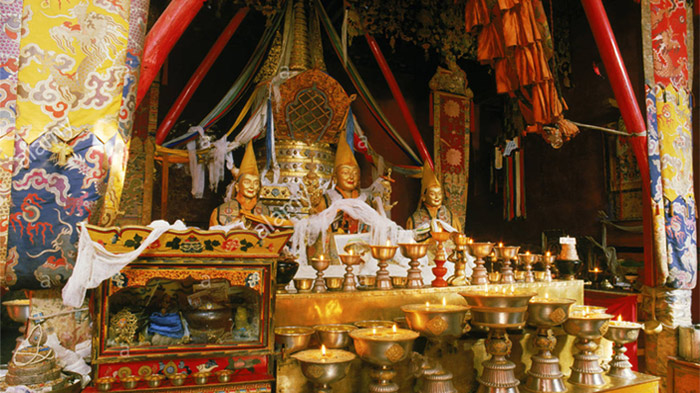 The gilded statues in the main chapel of Ganden Monastery

To the side of the main chapel, a small ochre and maroon chapel holds a gilded statue of the Sakyamuni Buddha, and has a section to the side for creating new volumes of Tibetan Buddhist scriptures, using wood-block carvings to print the pages. Alongside these chapels are also the Serdung, which contains the original tomb of Tsongkhapa, the Tsokchen Assembly Hall, and the legendary Ngam Cho Khang, the chapel where Je Tsongkhapa once spent his time teaching Buddhist monks in the monastery.

The Ganden Kora is one of the most beautiful short kora routes in the world, and while it can easily be completed in one day and is not an arduous trek, it is one of the most important pilgrimage sites outside Lhasa because of its connections with Je Tsongkhapa, the founder of the Gelug School of Tibetan Buddhism. Trekking the kora routes around Ganden is one of the best ways to get to see the stunning vista from the top of Wangbori Mountain, looking across the valley and over the G318 Sichuan Tibet Highway to the mountains beyond, far to the north. The kora can be done at almost any time of the year, and if you plan to make the trip to Ganden, you should wait until you have acclimatized in Lhasa first, as Ganden is almost 1,000 meters higher. 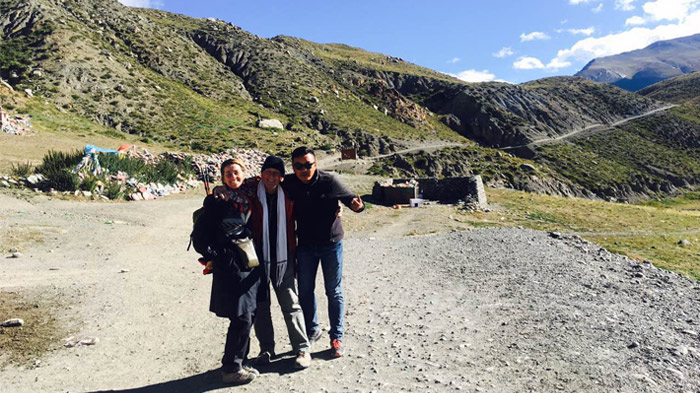 Our clients have finished Ganden Monastery Kora, one of the best treks in Tibet.

One of the most important religious ceremonies in the Gelug Buddhist calendar, the Ganden Thangka Festival is held every year on the 15th day of the sixth lunar month, in memory of Je Tsongkhapa. Thousands of local Buddhists and tourists gather at the monastery for the Thangka unveiling ceremony, when a huge giant thangka is carried reverently out of the monastery onto the hillside behind and unfurled in front of the crowds. The people start to arrive very early in the morning, and climb to the top of the mountain to watch the sunrise and chant their prayers as they wait. Then, as the thangka is brought out and unfurled onto the hillside, standing around 200 feet tall and 150 feet wide, the crowds of devotees rush forwards to touch the hem of the sacred painting of Buddha and throw white hada onto it for blessings. 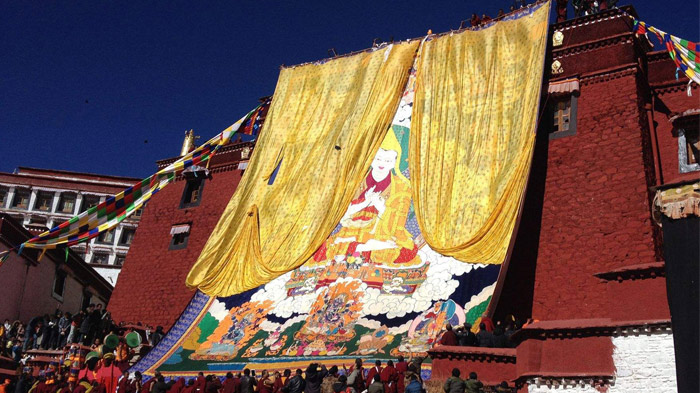 The giant Thangka was unveiled at Ganden Monastery.

if you are traveling to Ganden to walk along the kora routes, then it is best to make sure that you are properly acclimatized to the altitude of Lhasa before you do so. Ganden Monastery lies at around 4,300 meters above sea level, over 650 meters higher than the Tibetan capital and high enough to cause severe altitude sickness if you are not acclimatized to the elevation of the plateau.

The best thing to do once you reach Lhasa is to rest and drink plenty of water, eating regular meals of high-protein foods such as red meat and vegetables, to keep yourself from getting dehydrated and ill. Altitude sickness can affect anyone, and often most people fell the effects of it when they get to the plateau. You should also avoid any strenuous exercise until you are acclimatized, and refrain from smoking and drinking alcohol and coffee for a couple of days until you are feeling better and well adjusted. - See How to Prevent Lhasa Altitude Sickness for the Newly-Arrived Tourists

How to Get to Ganden Monastery

Getting to Ganden is relatively easy, since you will be taken there by your guide and driver in the vehicle provided for your tour. Ganden lies to the east of Lhasa, and the route takes you across the Lhasa rover and then left onto the G318 National Road, also known as the Sichuan Tibet Highway, which runs all the way through Nyingchi to Chengdu. After around 30 kilometers, you will turn off the highway and switch back on yourself to the foothills of Wangbori Mountain. Heading south until you reach a small settlement, you then turn to head up the mountain, along the winding roads that lead through hairpin bends and switchbacks to the monastery.

Off-the-beaten Trek from Ganden to Samye

If you are looking for a different trek in the area, and one with a little more challenge, then the Ganden to Samye Trek is the ideal option. Starting at the monastery at Ganden, this 80-kilometer trek takes around 4-5 days, and crosses over high passes, the highest point being the Shogu-La Pass at 5,630 meters. Heading south through the mountains and valleys, the trek takes you through some of Lhasa and Shannan’s most stunning countryside, with spectacular views of the landscape and scenery, including beautiful lakes, wide lush meadows, snow-filled passes, and the tents and herds of the Tibetan nomads, caring for their herds of yaks in the lush green valleys of the region. At the other end lies the Samye Monastery, believed to be the first ever Buddhist gompa in Tibet, built around 775 AD under the patronage of the Tibetan King, Trisong Detsen during the revival of Buddhism. - Check the Ultimate Guide to Ganden Samye Trek 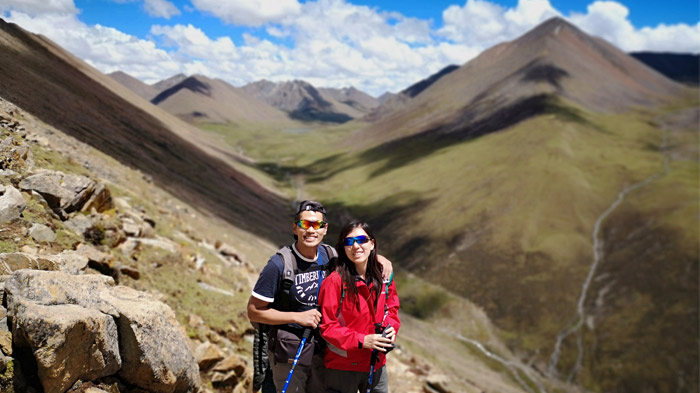 Under the brilliant sunshine and blue sky, our clients are trekking from Ganden to Samye Monastery.

Ganden Monastery is one of the most amazing monasteries of the Gelug School of Tibetan Buddhism and a great place to visit, not just for the unique monastery and its historic relationship with Je Tsongkhapa, but also for the stunning views of the surrounding countryside and mountains. As one of the must-see locations in the Lhasa area, Ganden Monastery tour will live up to your expectation. Just never miss the chance to enjoy unique architecture of Ganden Monastery, experience the scenic kora around Ganden, and even trek from Ganden to Samye Monastery. One of the best times for visit is during its grand Ganden Thangka Festival.